This handsome colonial in the Elliger Park subdivision dates to the Depression era, but it got a totally modern style injection in a 2010s expansion. 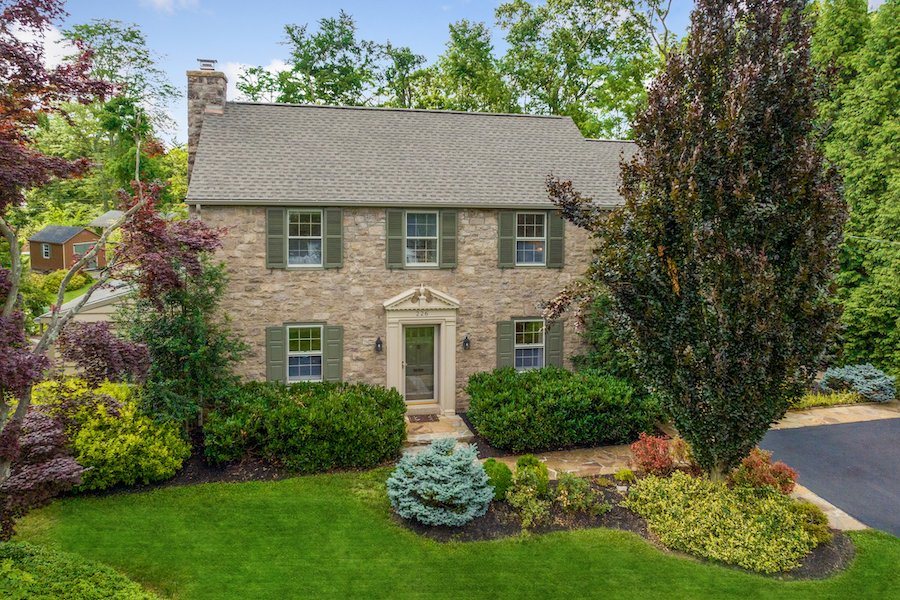 This handsome, modest colonial has sat at 226 Locust Rd., Fort Washington, PA 19034 since the early years of Potts Brothers’ Elliger Park development. But there’s much more to this house now than meets the eye from the street, as you are about to find out. | Photos: Perspective Media via Compass unless otherewise noted

Usually, when a house for sale in Fort Washington crosses my radar screen, it comes with a very hefty price tag. Like this Rafael Viñoly-designed modern medieval castle that went on the market back in 2011. After multiple listings and swings in its asking price, and an unsuccessful attempt to auction it off in the fall of 2020, it finally changed hands during the height of the pandemic, in March 2021, for a relative song: $5.625 million.

The first piece of good news about this Fort Washington expanded colonial house for sale is:  You won’t have to pay anywhere near that much for it. In fact, you won’t even shell out seven figures for it.

The second piece: You now have a rare opportunity to move into one of Fort Washington’s most sought-after neighborhoods, for this house is located in Elliger Park. 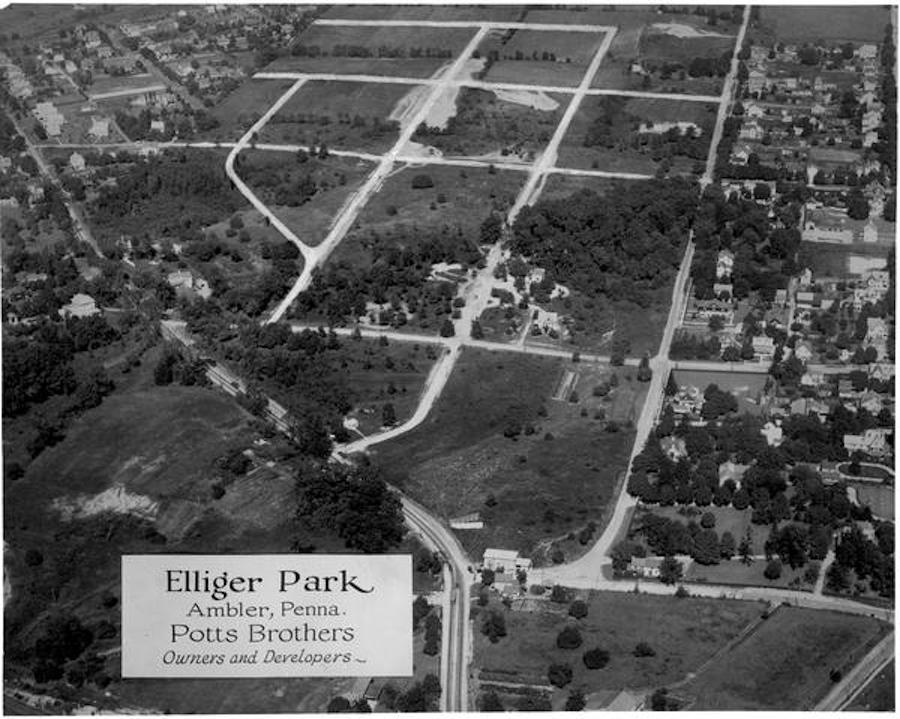 Developed by the Potts brothers beginning in 1926, Elliger Park takes its name from the gentleman who made it his summer estate: Dr. George Elliger, who purchased a 1795 house and 80 acres of land surrounding it in 1855.  The house still stands in Elliger Park, facing Bethlehem Pike just north of Montgomery Avenue.

Born in Germany in 1802, Dr. Elliger was a leading champion of homeopathic medicine with practices in both Philadelphia and Brooklyn, where he died in 1878. Mary Paul Halliger Hough, in her 1936 history of Ambler’s early years, explains how Potts Brothers came to name the community for him thusly:

This tract of eighty acres had been known for many years as “The Elliger Estate,” and so, in choosing a name, the Potts Brothers called it “Elliger Park” realizing that because of its situation, and because of its many and beautiful old shade trees, a picturesque and park-like residential section could be developed.

“Park-like” is also an apt term to describe the lot on which this Fort Washington expanded colonial house for sale sits. One of the largest lots in Elliger Park, it has been beautifully landscaped with a variety of trees, shrubs and flowering plants.

The original house, most of which you see in the photo at the top, is one of the oldest in the subdivision. Public records give its date of construction as 1940, but given that Potts Brothers began selling lots in Elliger Park in 1926, chances are that it predates 1940 by several years.

That would make it a Depression-era colonial, but there’s nothing depressing at all about this spacious, well-maintained house.

For starters, it has been significantly expanded and altered over the years since its construction. 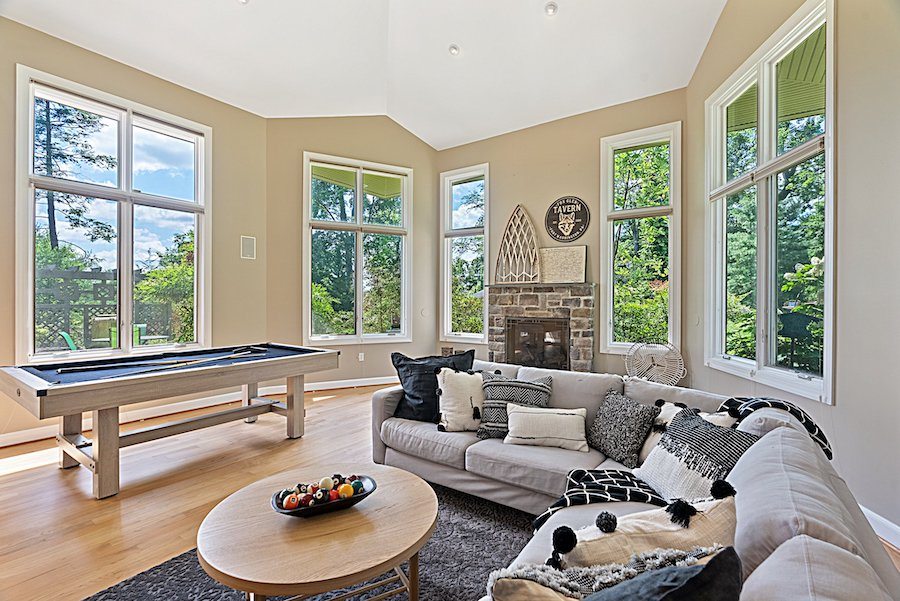 The principal expansion is the two-story-high addition in the back of the house, which created a cathedral-ceilinged great room with huge windows and a stone fireplace. This wing got tacked onto this house by its previous owner sometime between 2015 and 2020. 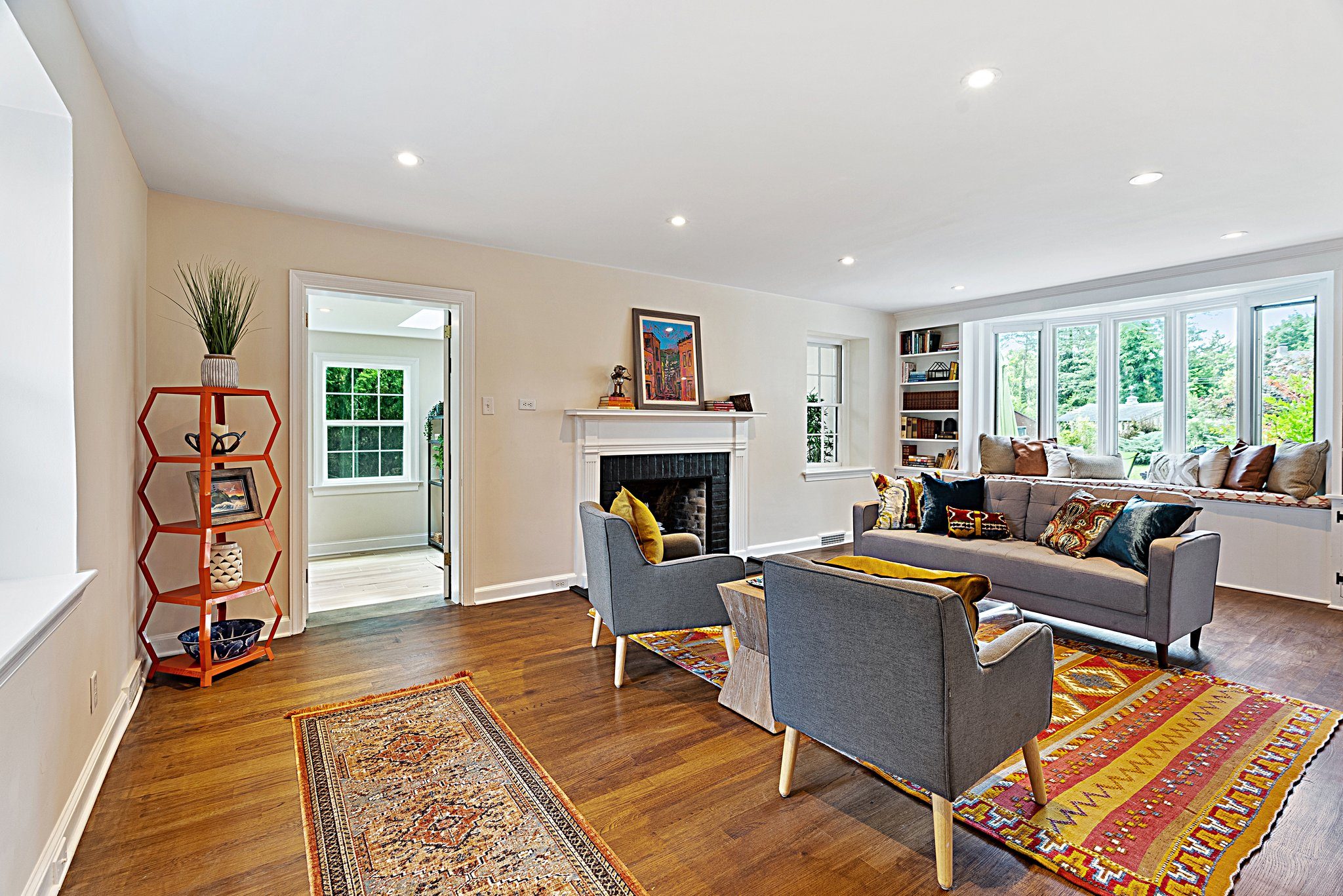 The great room is located directly behind the foyer, which is not so much a center hall as a center entrance. To its left lies the original living room, which has built-in bookshelves, a traditional fireplace, and a bow window facing its backyard. The bow window’s large single panes suggest it was installed when the house was expanded. 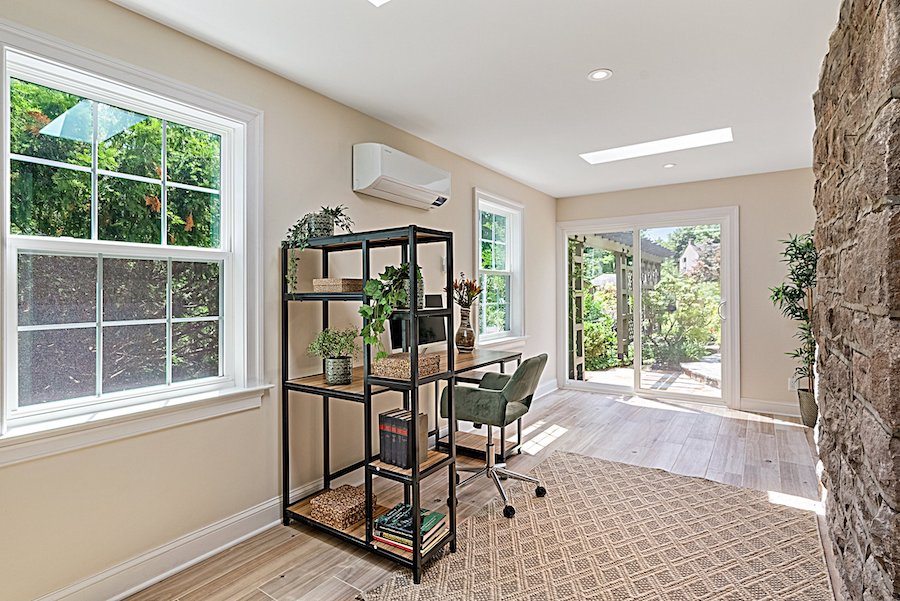 To the left of the living room, a sunroom boasts skylights and sliding glass doors leading to the larger of this house’s two rear patios. 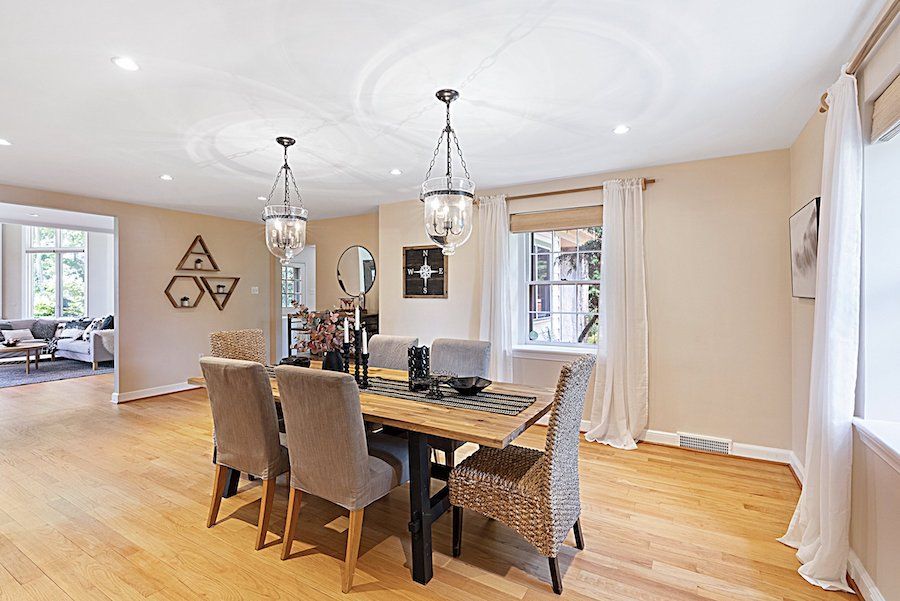 Like the living room, the formal dining room to the right of the foyer combines the clean lines of modern design with the elements of classic style, as reflected in the lighting. 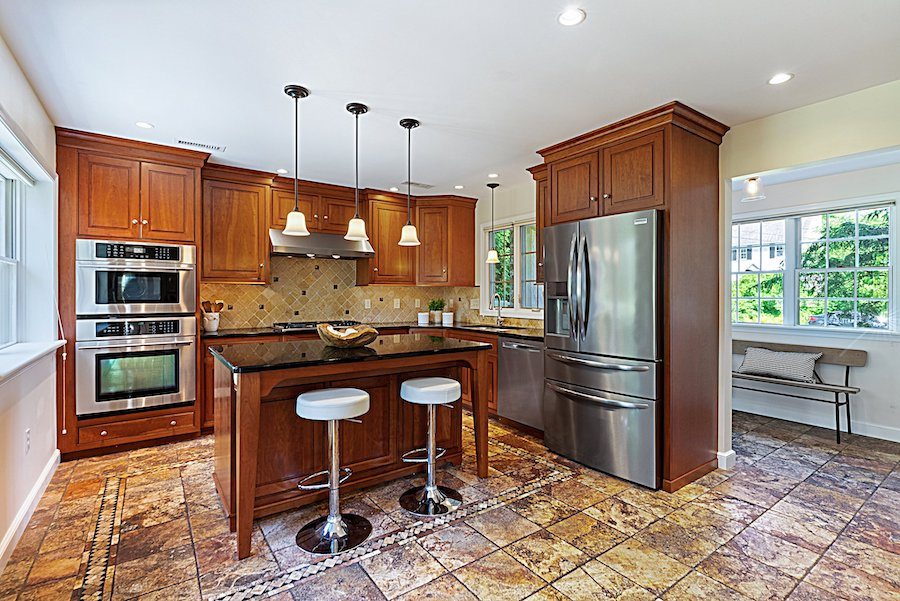 To its right lies what had been the garage of the original house. It got transformed into a nicely outfitted kitchen with plenty of traditionally styled cabinets, black granite countertops, and up-to-date stainless-steel appliances that include a five-burner gas cooktop, a built-in wall oven and a built-in microwave above it. 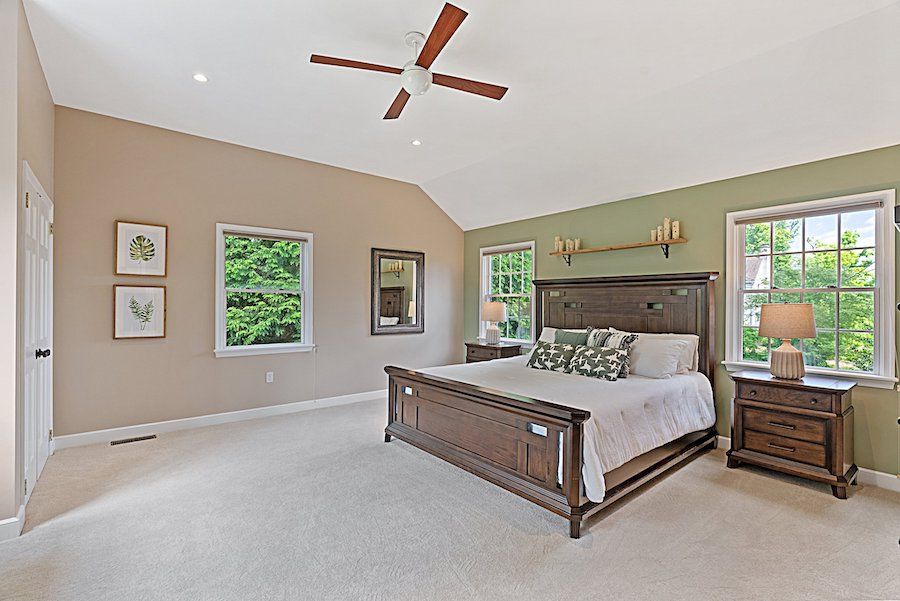 The makeover added a second story to this wing of the original house. In it you will find a frankly modern primary bedroom with a vaulted ceiling and a modern ceiling fan like the one in the great room. 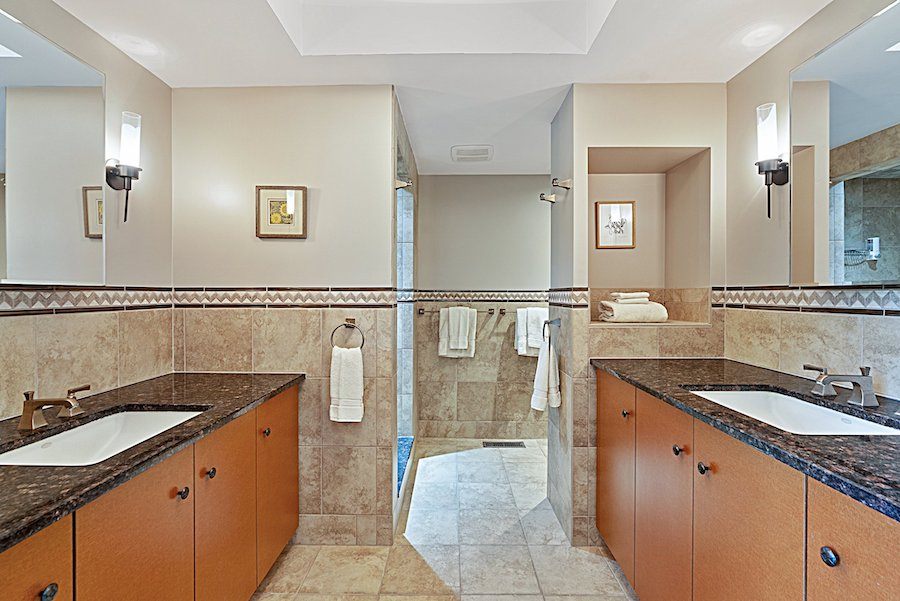 It has two large closets and an equally large primary bathroom lined with earth-tone tile wainscoting. Its full-tile walk-in bench shower has both a rain shower head and a handheld one. 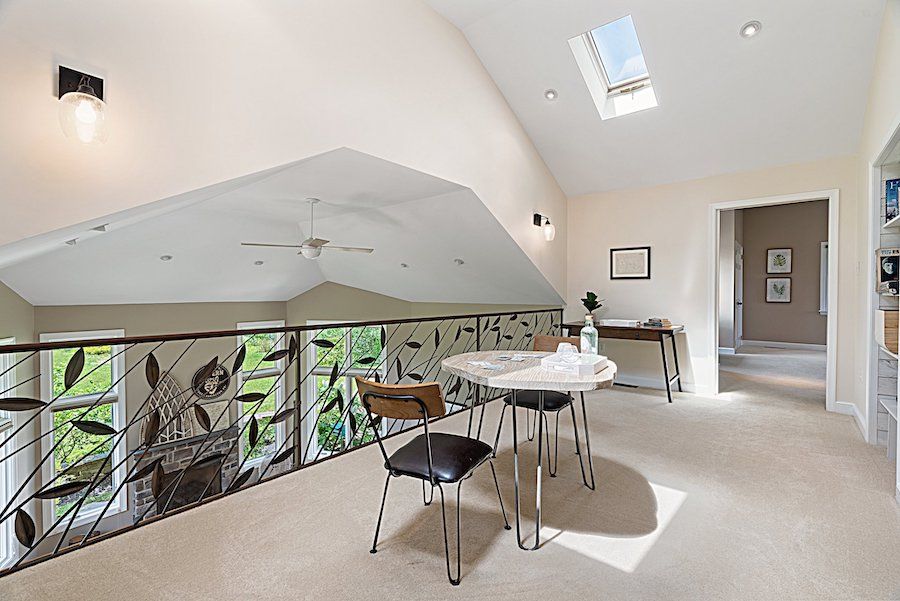 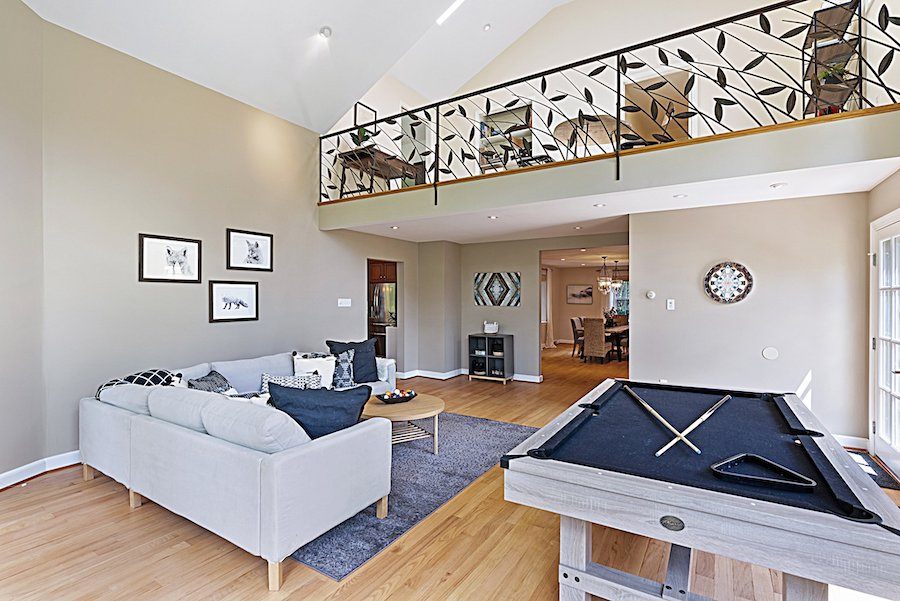 Next to the primary suite is a skylit loft den overlooking the great room. The other two bedrooms on the second floor have been nicely refreshed, as has its hall bathroom. 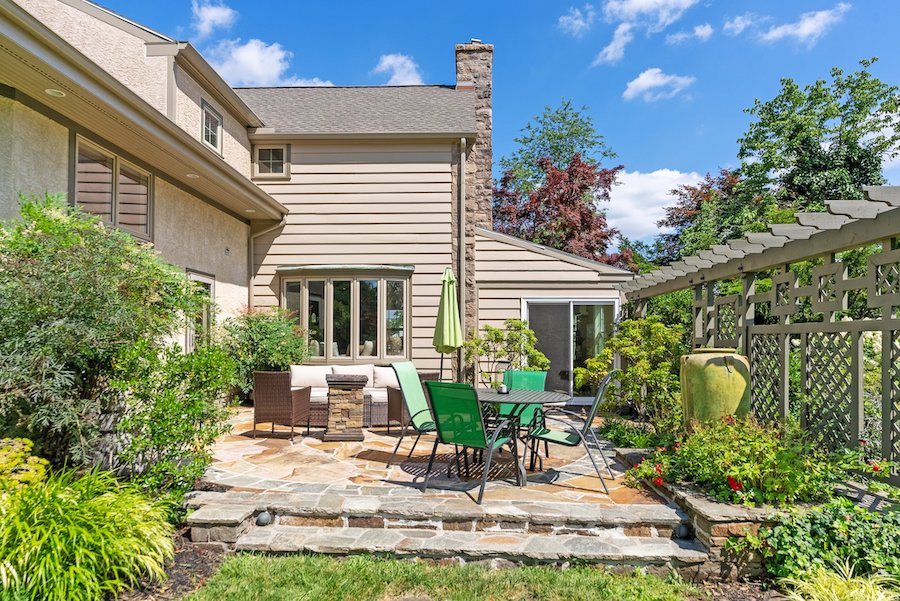 The backyard contains multiple showstopper spaces, starting with the rear patio off the great room and sunroom. 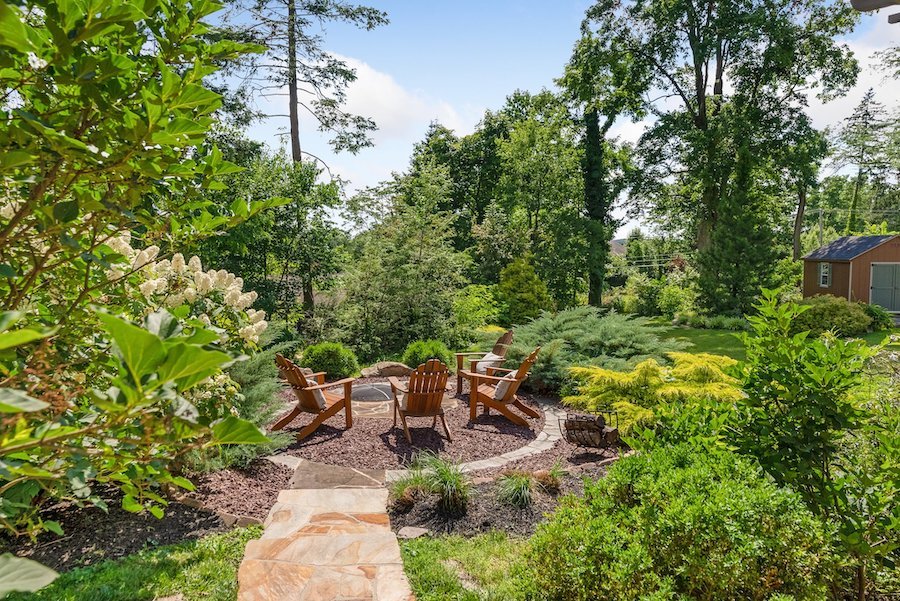 Steps lead down from it to a fire pit that looks out on all that gorgeous landscaping. 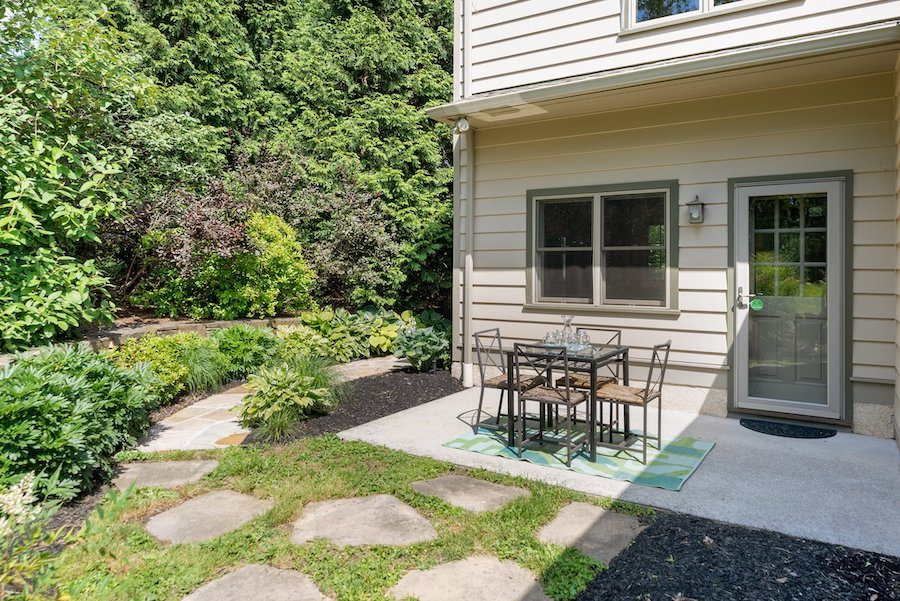 For more intimate outdoor dining, a second patio sits off the kitchen.

Based on the stats listing agent Tim Owen of Compass provided, it may be harder to buy a house in Elliger Park than it is to join the Union League. “Only four homes have hit the market in the last 12 months in Elliger Park, and there are 288 homes in the neighborhood,” he says. “There has not been a home this size to hit the market there in several years.” 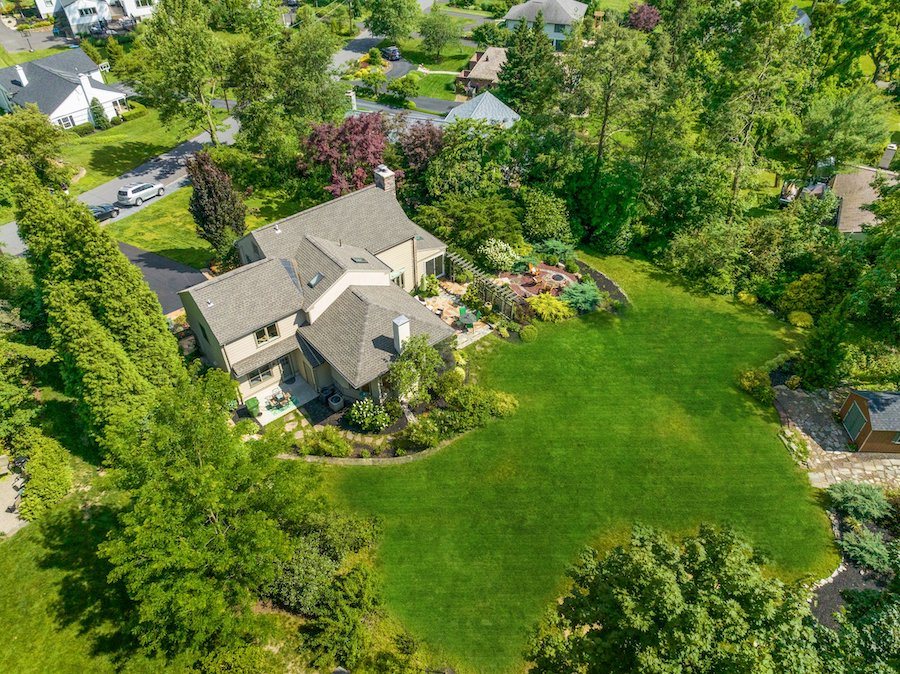 Aerial view of house and backyard

(You should be able to see from the top photo that this house was originally more modest than it is now. Most Elliger Park houses are still on the modest side.)

Of course, unlike Dr. Elliger, you’re probably looking for a place to call home all year round, not just for the summer. But if, like Elliger, you want to go into the city on a regular basis, you will also find this house ideally situated.  You can walk from here to Fort Washington station on SEPTA’s Lansdale/Doylestown Regional Rail Line for a comfortable, hassle-free trip into town. And if you need to drive, you’re also close to the Fort Washington Expressway and its interchange with the Pennsylvania Turnpike.  Ambler and Chestnut Hill, both very walkable, are also close at hand.

Put all these attributes together and it should be little wonder that Elliger Park houses don’t change hands all that often. This one, however, can now fall into yours.

OTHER STUFF:  Even though it no longer has a garage, this house has room to park six cars in its driveway. It also has an unfinished basement with laundry facilities and plenty of storage space. Its attic also has the potential to be outfitted as a bonus room.