This stately mansion, which is actually three residences in one, stands out from the townhouse development its builder laid the groundwork for. 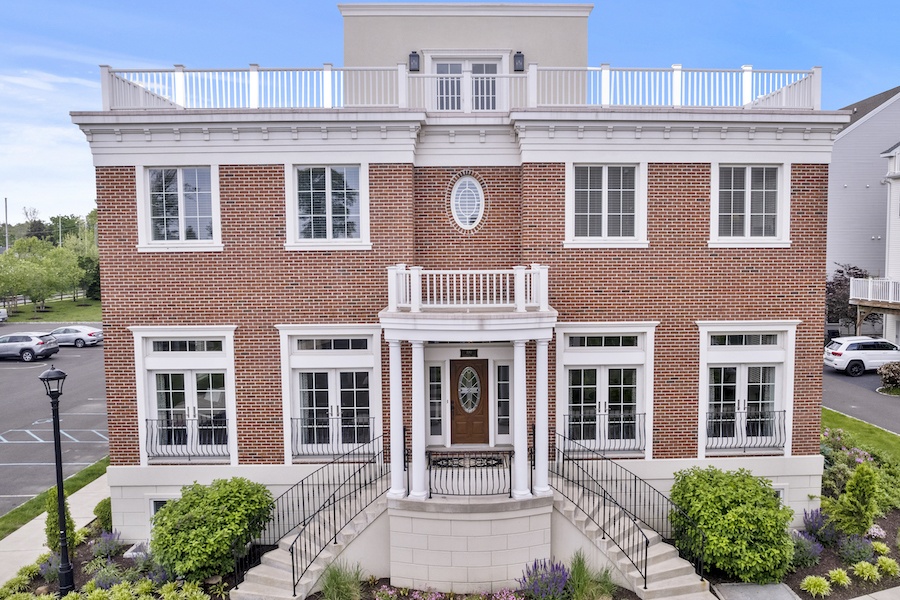 This elegant, graceful 18th-century house would look right at home on the Main Line, or amidst the new-money mansions of turn-of-the-century Cheltenham Township.

However: This isn’t an 18th-century house; it just looks like one. This Bensalem Georgian manor house for sale sits in a subdivision of much more ordinary tract townhouses next to the Delaware River.

That townhouse community exists in part because Fred Hagen, the builder who built this house for himself in 2015, sold the company that built it the chunk of land it needed to make its parcel whole.

“Mignatti [Mignatti Companies, the original developer of the Waterside subdivision in Bensalem] had already purchased two adjacent industrial properties, and they needed my property because [their site] had an irregular lot line,” explains Hagen. “I didn’t originally want to sell it to them. But after much going back and forth, we came to an agreement. I would put most of my property in the development, but I would retain the right to develop it.” 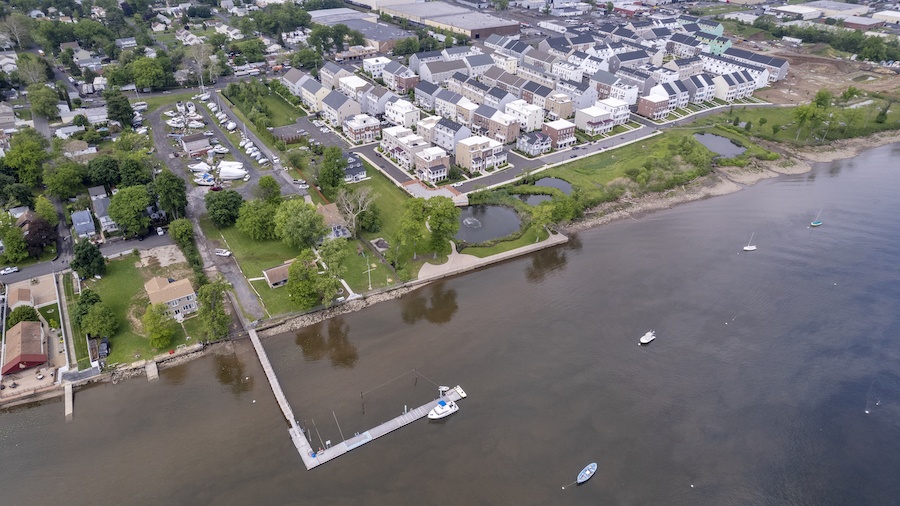 Aerial view of Waterside by Lennar; Hagen’s house terminates Hagen Drive, in the upper center of the photo. The stone house sits just below it to its right. The L-shaped pier at bottom left belongs to the Philadelphia Yacht Club

His parcel consisted of 6.2 acres that had been part of a much larger farmstead. That farmstead got carved up into industrial sites in the 1920s and 1930s. The original stone farmhouse still stood on the site; he had converted it into his office. It also contained a barn that he had converted into two apartments. “But on the outside, it was unbecoming,” he says. “So I decided to design something” to replace the barn. “I had just been to Savannah, Georgia, and that was on my mind.

“I sketched up a Savannah riverfront house, and then got an architect to take my design and put it into construction drawings.”

And had Waterside been built as originally planned, this house might not stick out as much as it does now. “The original concept that we were discussing was quite a bit more upscale than what got built, because what got built was curtailed by budgetary constraints,” says Hagen. (Even with those constraints, it appears that the project was still too much for Mignatti to swallow; after completing its first phase, national home builder Lennar acquired the company and is now building the second phase.)

“I did not have those budgetary constraints imposed on my house, because I wasn’t looking at it as something I was selling. So I just got carried away and I went overboard.”

Well, if this Bensalem Georgian manor house for sale is an example of what happens when Hagen goes overboard, then I must say he shows admirable restraint in going over the top. 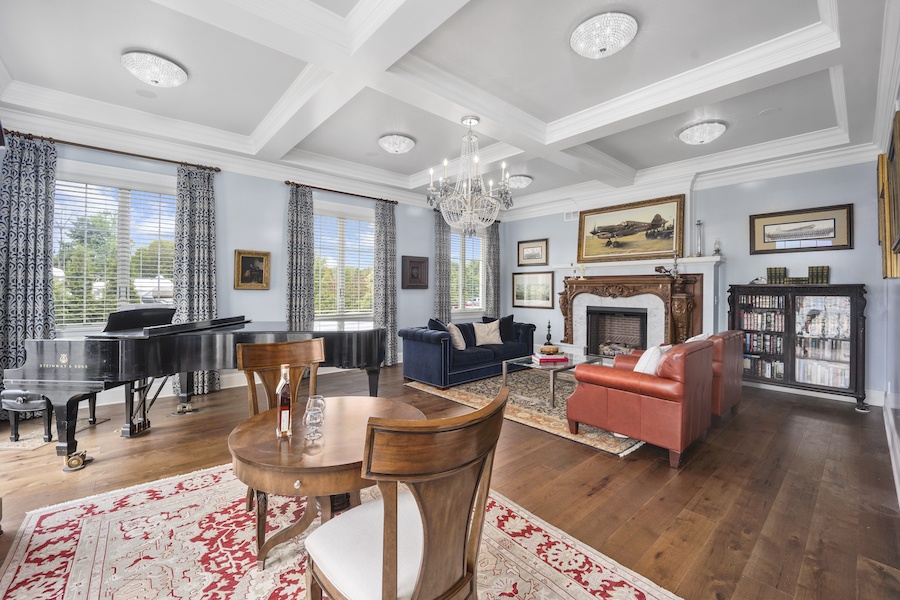 Its design is very much in keeping with the Georgian tradition, and unlike what you might find in a similar house in Gladwyne, it neither goes for baroque nor offers rococo-cola decoration. And you can tell that Hagen didn’t skimp on the quality of construction. 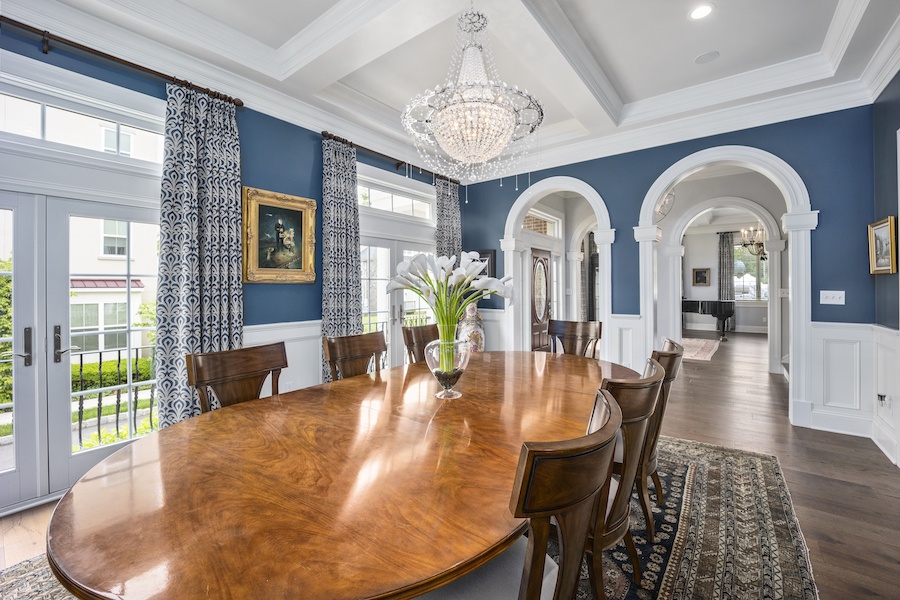 Its main floor is in essence an open-plan space, with large arched openings separating its foyer from the living room on one side and the dining room on the other. 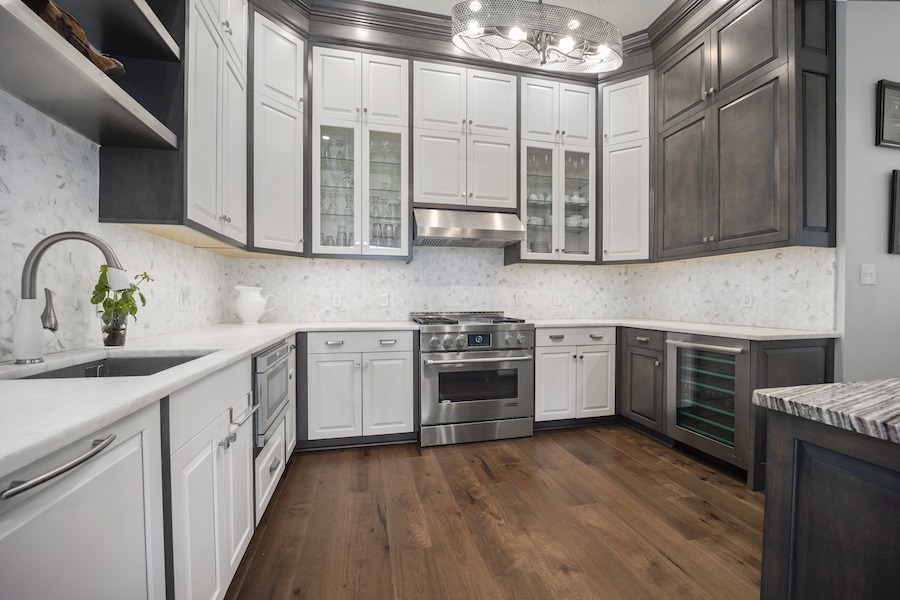 But the main floor is not totally open-plan, for the kitchen is separate from the dining room. Its high ceiling, however, means it has room for plenty of cabinets for storage. It also has a full suite of appliances, including a wine fridge and a refrigerator and dishwasher whose faces match the cabinetry. 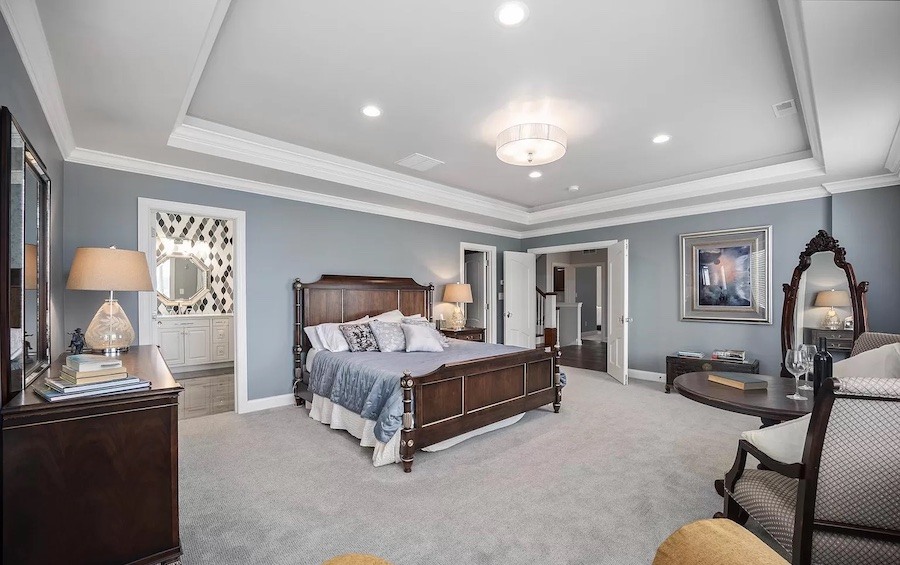 The second-floor bedrooms are all tastefully done and outfitted, and both the en-suite primary bathroom and the hall bath have luxurious fittings. 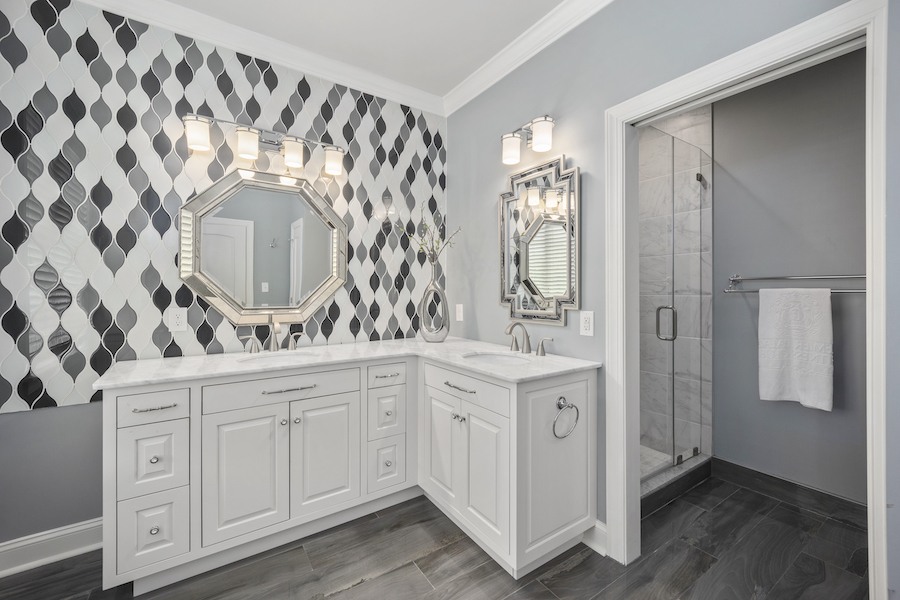 The tile backsplash in the primary bathroom is particularly eye-catching. 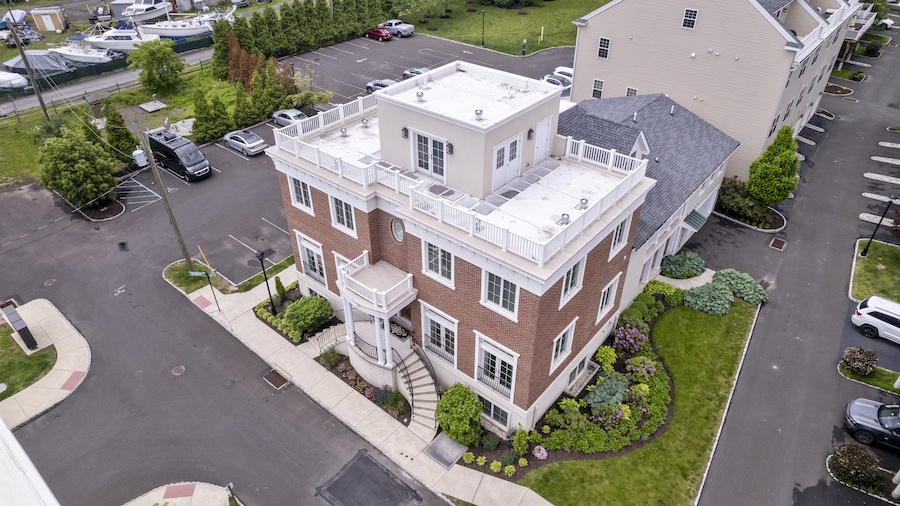 Topping everything off is a roof deck with a panoramic view of the surroundings and a half bath in its pilot house. The deck itself can be used as-is but looks like it wants some actual decking. 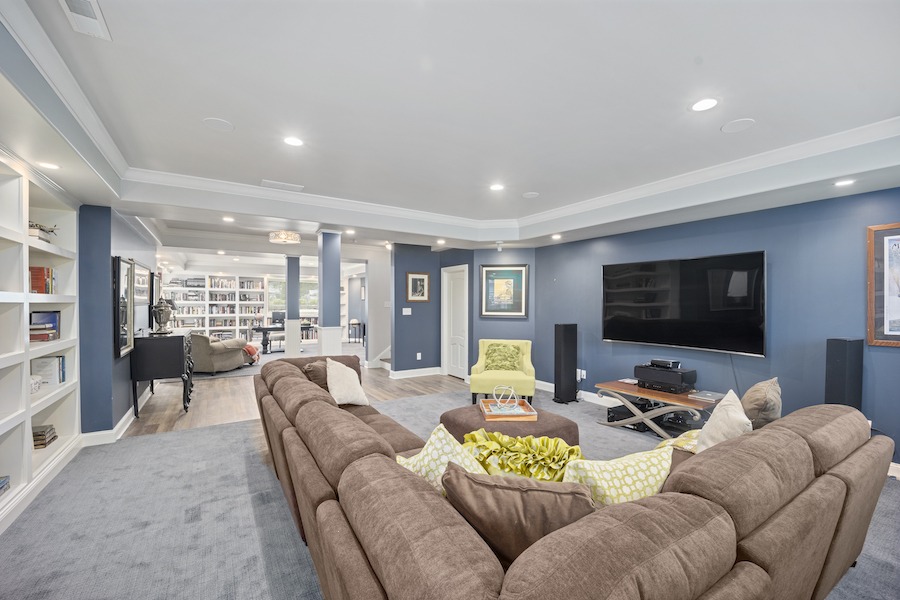 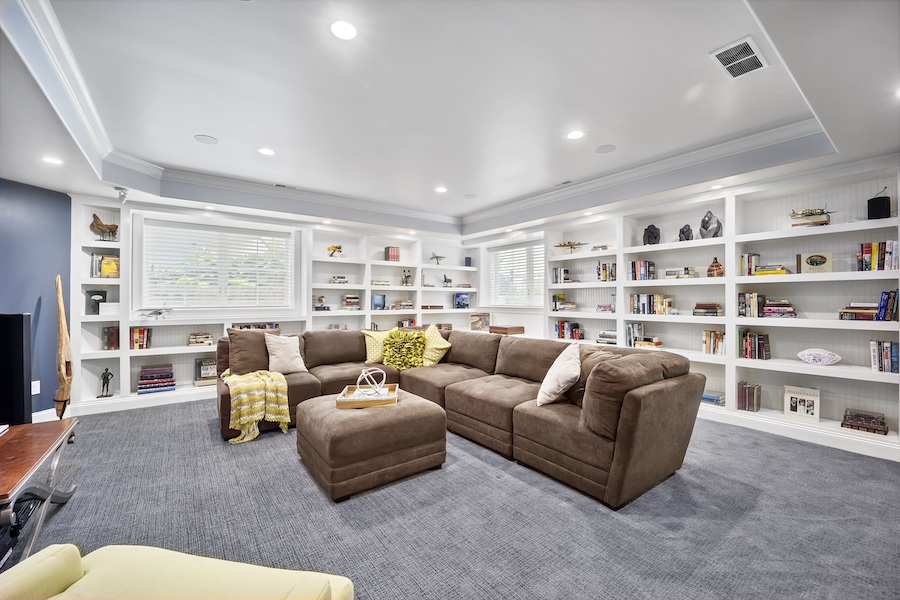 And the basement contains a very comfortable media room/rec room combination along with a full bath. 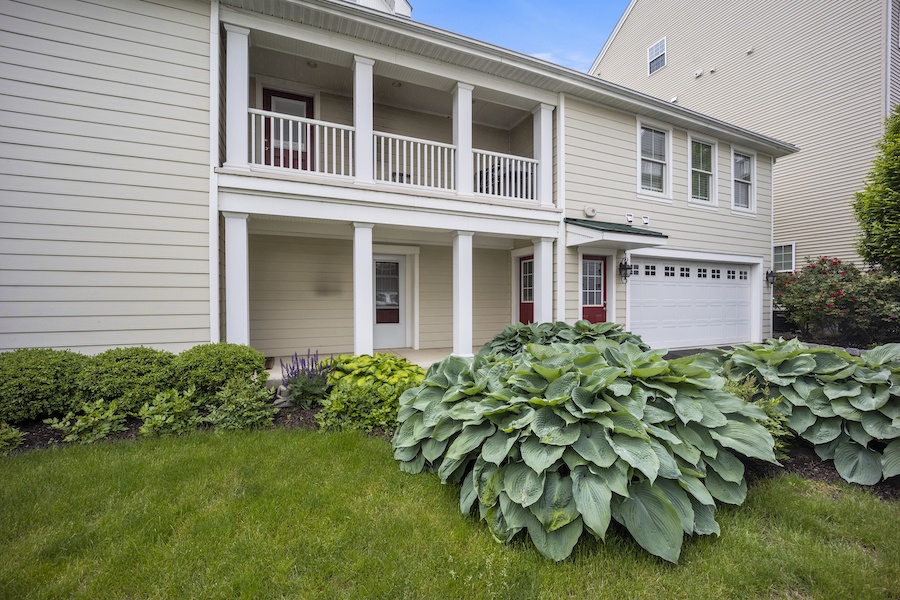 Something else that comes with this house: Two guest/in-law apartments in a wing attached to its rear. 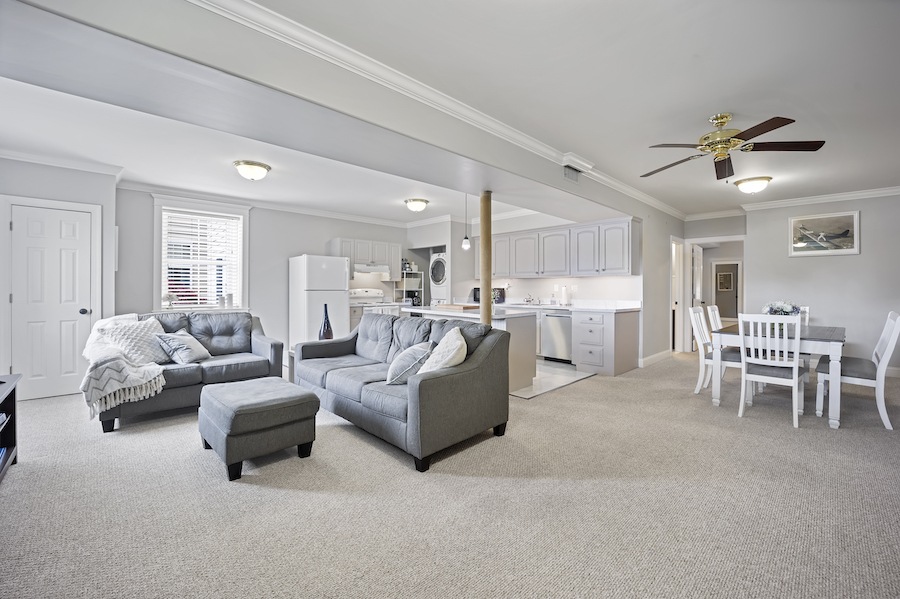 One, a one-bedroom, one-bath unit next to the two-car garage on the first floor, makes an ideal guest suite. 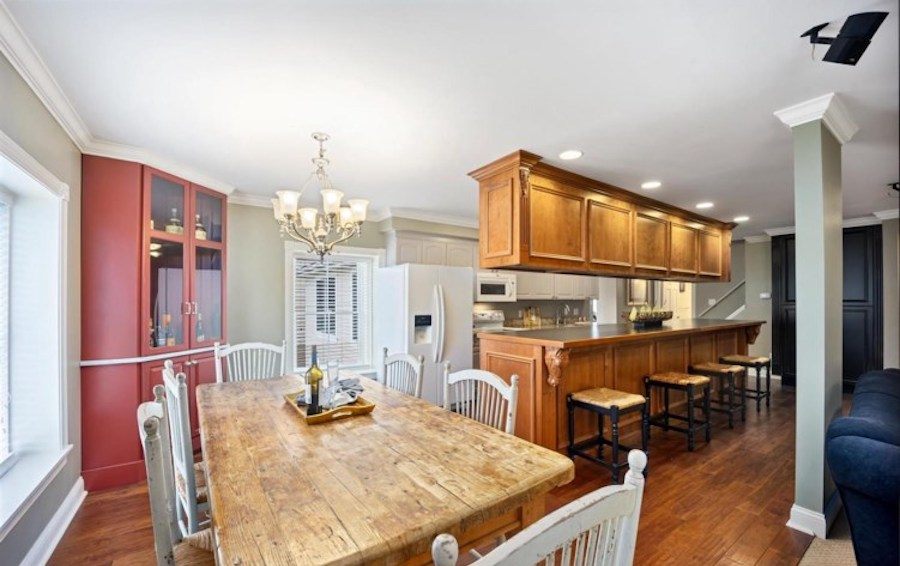 The second, two-story unit on the upper floors contains an open-plan main floor and three bedrooms, two with en-suite bathrooms. Two are located on the second floor and one sits on the third.

Its location at the intersection of Tidewater and Hagen drives gives it a clear view of the river. And the Waterside development is also close to Cornwells Heights Regional Rail station.

Most of the businesses lining State Road, which leads to what is now known as Waterside by Lennar, perform light industrial functions, but there is a cafe and diner at the entrance to the community, and Broken Goblet Brewing Company lies a short drive away. And the Pennsylvania Yacht Club sits right next to this community.

Given its quality, its amenities and the fact that you will be buying three residences in one, this single most expensive house for sale in Bensalem — this Bensalem Georgian manor house for sale is the only million-dollar-plus listing in the township — may actually be a great deal.

(figures are for all three units combined)