Located in a historic former duplex dating to just after the Civil War, this elegant condo is loaded with modern amenities. 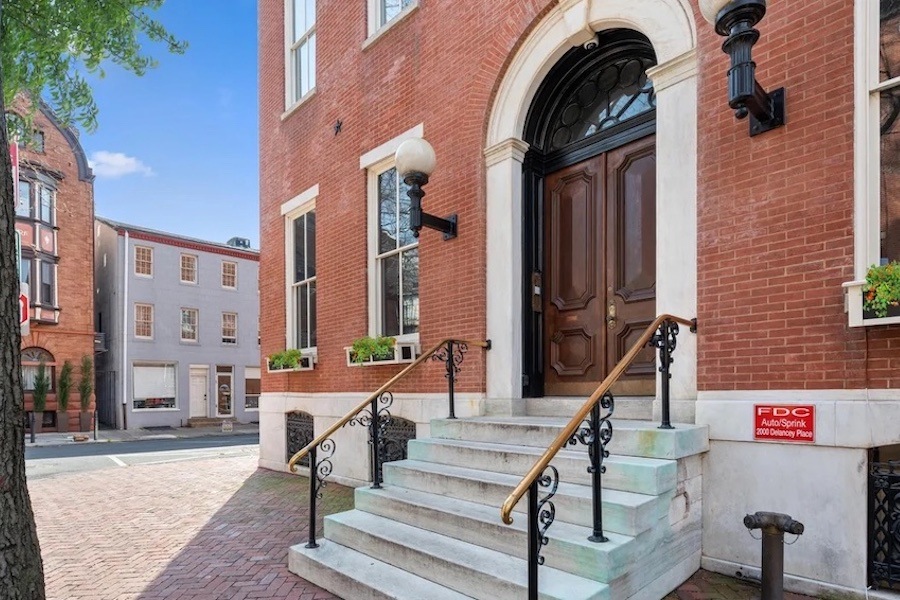 Just two blocks west of the home of Civil War general George Meade sits this house built just after that war. Originally a duplex, it got turned into five LEED Silver-certified condos. The one for sale is located just to the left of the front door: 2000 Delancey Place #1E, Philadelphia, PA 19103 | Bright MLS images via Keller Williams Main Line

In Manhattan, buyers will pay a premium for condominiums and co-ops in “pre-war” buildings — meaning buildings erected before World War II.

In Philadelphia, you don’t hear that phrase bandied about much by real estate agents, because the buyer is likely to respond, “Which war?”

Yet here it is, in the listing copy for this elegant, recently built Delancey Place condo for sale in Rittenhouse Square.

What that tells me is, the agent marketing this condo is quite likely a New York transplant, for this house predates the majority of the wars this country has fought. 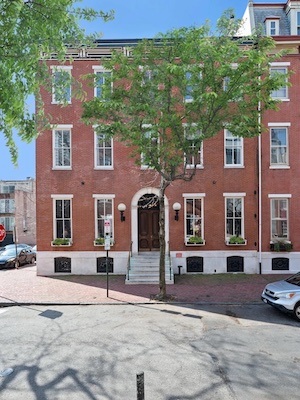 The war it doesn’t quite predate is the Civil War.  The building whose facade you see in full at left is part of a row of brick-and-marble houses built between 1865 and 1866. According to Living Places’ history of the row, the likely builders were three brothers named McCrea. One of those McCrea brothers, Joseph, was a physician who lived in the house they built next door at 2004 Delancey Place.

This house, the only duplex on a block full of large mansions, was designed in the Federal style that has been a Philadelphia favorite for centuries. And the block it sits on is very photogenic: Scenes from at least six movies and two TV shows have been filmed on the 2000 block of Delancey Place, making it the most-filmed street in the city.

Because this structure contained two houses, converting it into condominiums proved very easy. And as you will soon see, the condos also channel the spirit of the original dwellings while offering all the modern conveniences buyers now expect in a more sustainable manner: the 2012 conversion of this building qualified for LEED Silver certification.

This unit occupies the first floor and basement of the original eastern house. You enter the building through doors salvaged from a vintage-1775 structure in England. 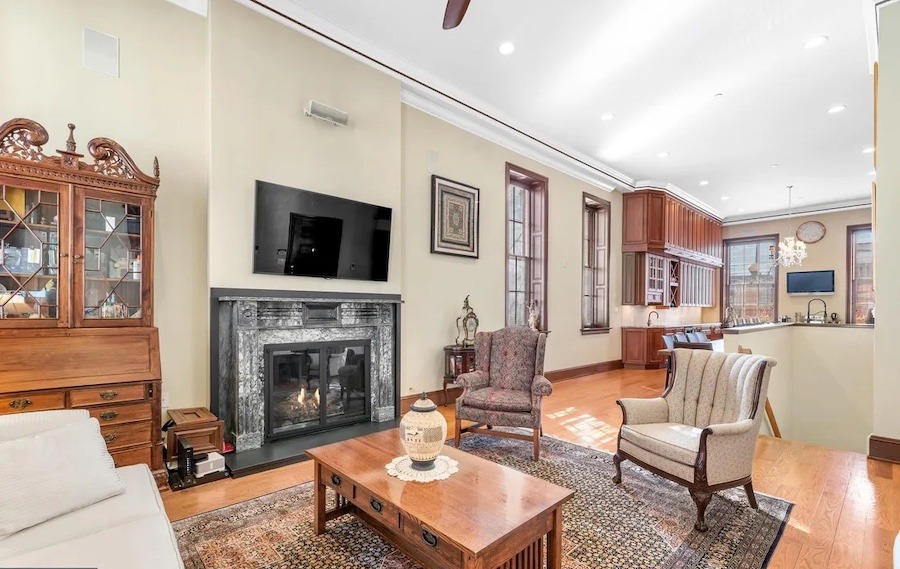 The entrance to this Delancey Place condo for sale is on the left just past the vestibule. It leads to a modern, open-plan main floor. 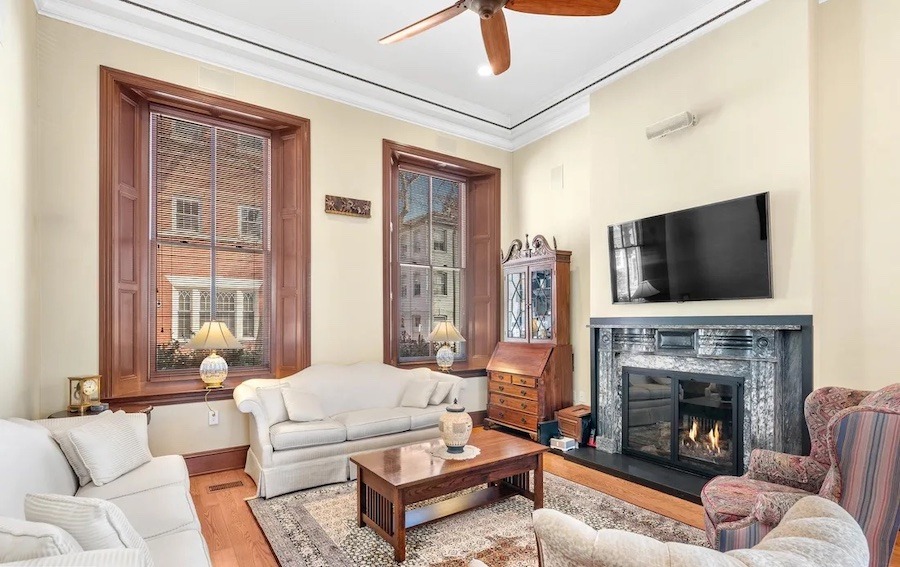 The living room had its fireplace of dark Pennsylvania marble replaced by a gas one framed in gray Prussian marble. 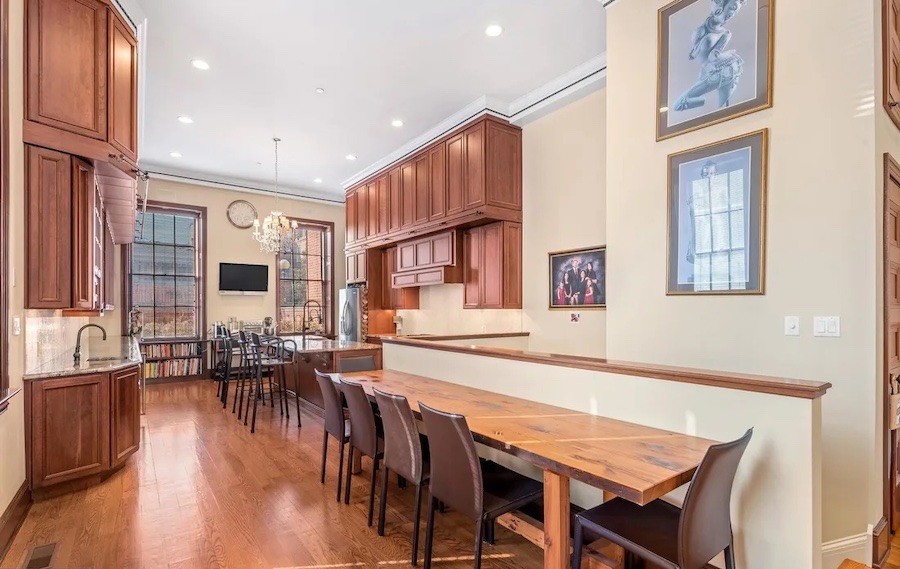 The dining room got truncated in order to make room for the stairs to the lower level, but between it and the eat-in kitchen, there’s still enough space for you to entertain a decent-sized crowd. 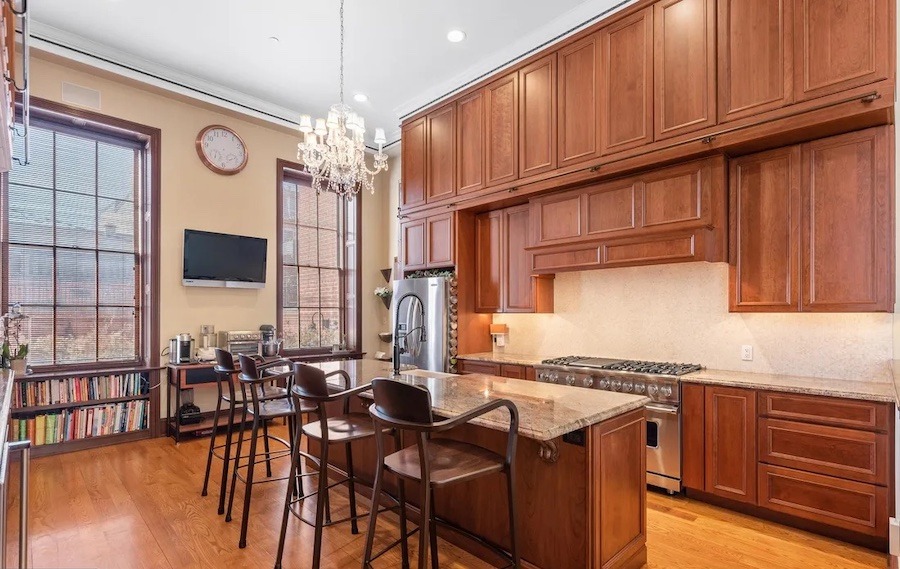 That kitchen features custom solid wood cabinetry in a respectful classic style. Its suite of stainless-steel appliances includes a Fisher & Paykel DishDrawer dishwasher and a Viking six-burner range with double oven and indoor grill. Its large granite-topped island has bar seating for four. 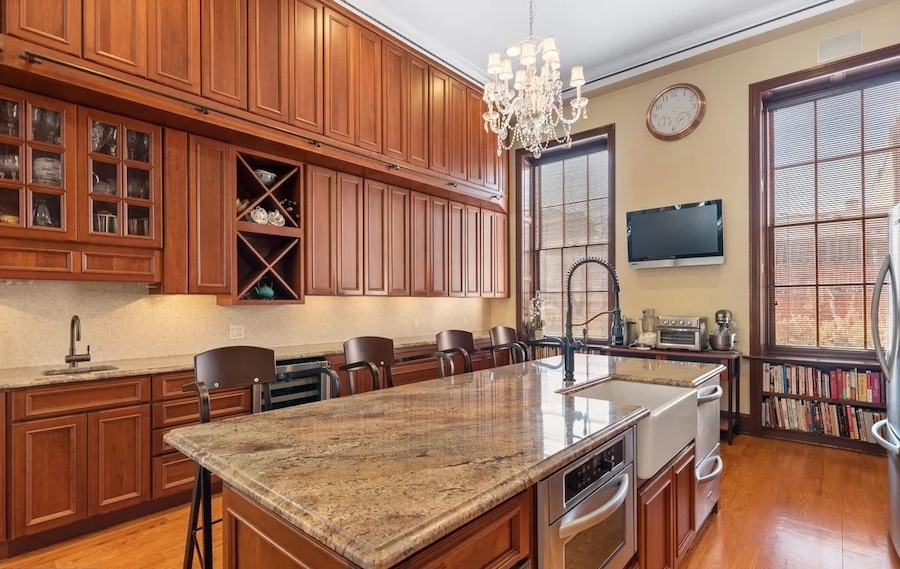 And behind the bar seating is an actual bar with its own sink, a Viking wine fridge and a wine storage rack amidst its ample cabinets. Some of those cabinets have glass fronts that let you show off your dinnerware and glassware. A powder room is tucked under the building stairs off the back of the kitchen. 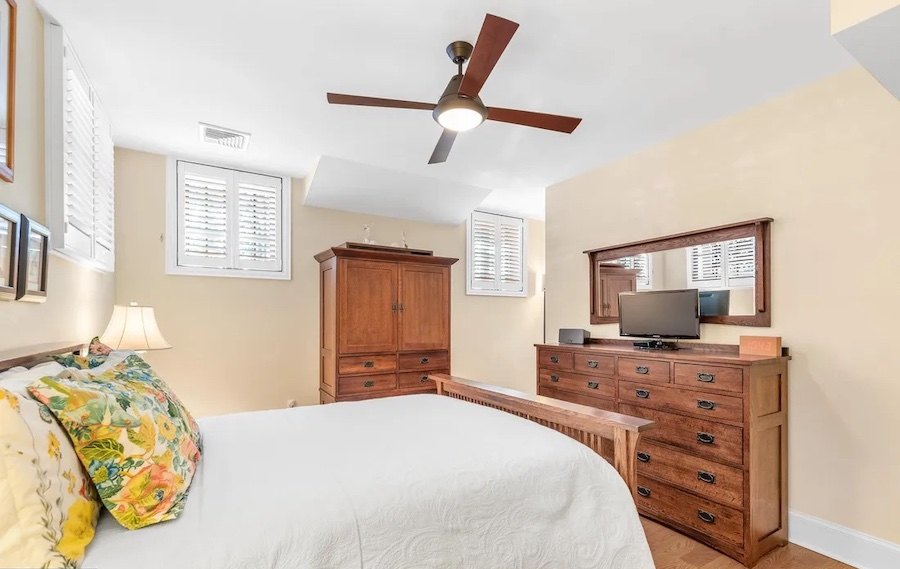 Downstairs you will find this condo’s two bedrooms. The primary bedroom, up front, has plantation shutters on its windows and a large walk-in closet. 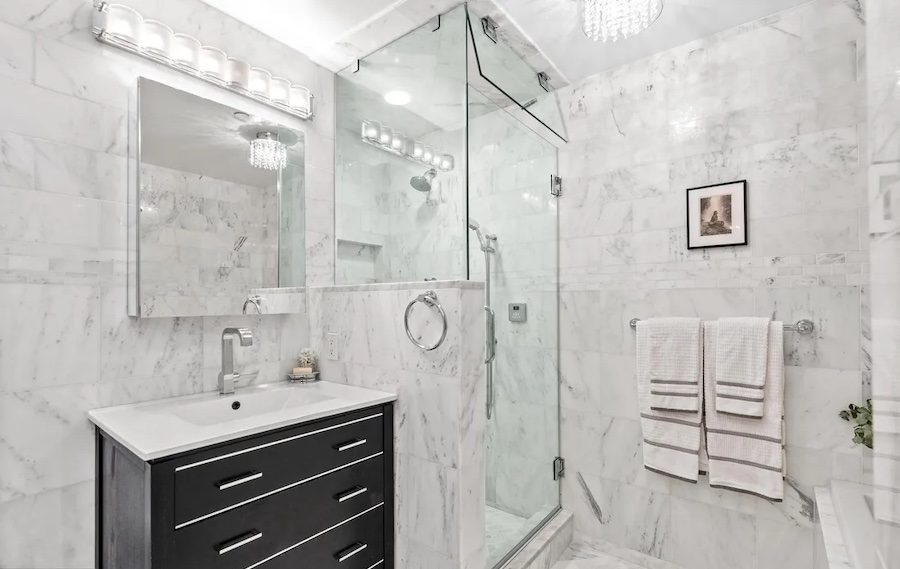 It also has a marble-clad bathroom outfitted with a steam shower, Jacuzzi circulating tub and a toilet equipped with a bidet with an inline water heater. A crystal chandelier adds a final touch of opulence.

The rear bedroom also has its own en-suite bath, and both bedrooms have modern ceiling fans that help the climate control system work more efficiently. 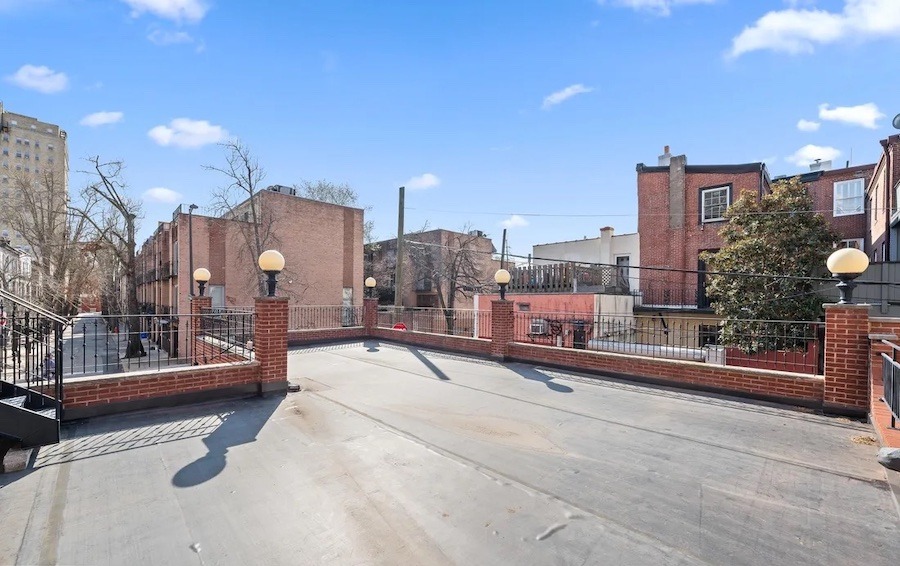 This unit also includes a deeded space in the five-bay garage attached to the back of this structure. A shared deck tops the garage.

I should point out two items you may want to ask about that are mentioned in the listing. One is the bison-wood deck, which appears to have been removed in the photo above. Perhaps it’s simply being stored for the winter. The other is the elevator mentioned in the listing copy. A review of the floor plans included with the photos turns up no evidence of its location.

This condo, on the other hand, is in an excellent location. It has several notable neighbors, including the Rosenbach Museum and Library just down the block at 2008-10 Delancey. Neighborhood shopping and restaurants abound on the stretch of 20th Street to your north, from Walnut to Spruce. And to your south lies the South Street West restaurant row. You’ll find a supermarket at the Grays Ferry Triangle, five blocks away. And, of course, you’re just a stone’s throw from the square itself and Rittenhouse Row.

Historic yet fresh, old yet new, and located on one of the classiest blocks in the city, this Delancey Place condo for sale offers everything you might want in a unit in a post-war building. Post-Civil War, that is.

OTHER STUFF: A $748 monthly condo fee covers maintenance of the building envelope and common facilities, including insurance on the building but not your unit.

Updated March 25th, 12:51 p.m., to correct the information about the listing agents.