Just Listed at the Shore: The Most Affordable House for Sale in Stone Harbor Right Now

“Affordable” is relative, of course. But contrary to what we assumed when we first saw it, this connection to Stone Harbor’s history will definitely survive, though maybe in altered form. 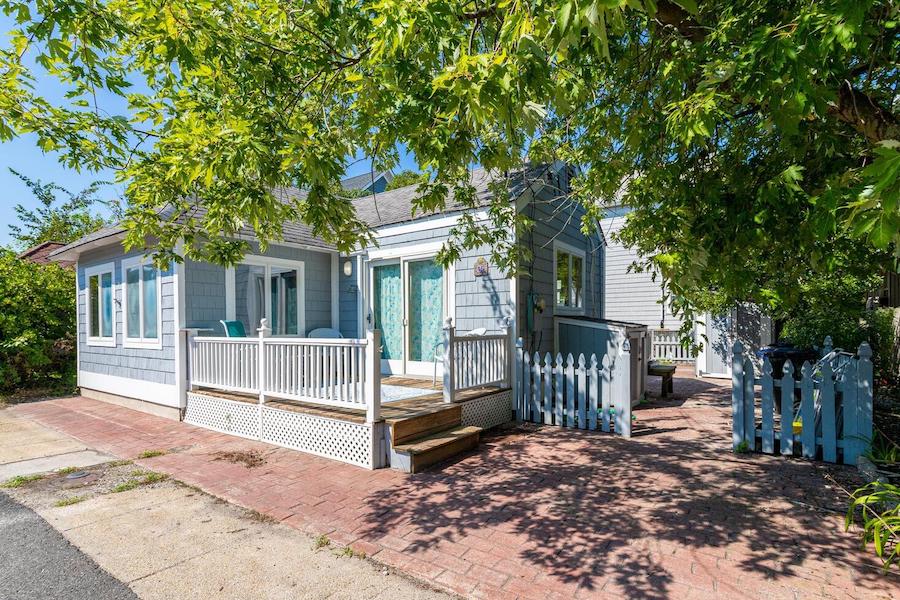 Those of a certain age should have fond memories of spending summers at the Shore at places like this Fifties cottage at 15 Stone Court, Stone Harbor, NJ 08247. But nostalgia won’t let you invite friends and family down to spend time with you. | Cape May County MLS images via Compass

Were this Stone Harbor cottage house for sale located just about anywhere other than Seven Mile Island, I might have headlined this “The Cheapest House for Sale in _________ Right Now.”

But there’s nothing that’s cheap about this throwback to Shore summers past. And I’m betting that this throwback won’t last long after it gets sold. (I’ve since learned that it will. Read on.)

Why should it?  Well, for starters, it represents an age before the Shore-house arms race began. Stone Harbor Borough dates to 1912, but up until sometime in the 1980s, most of the houses here looked more like this one than like the grand mansionettes that line both the beachfront and the bayfront. 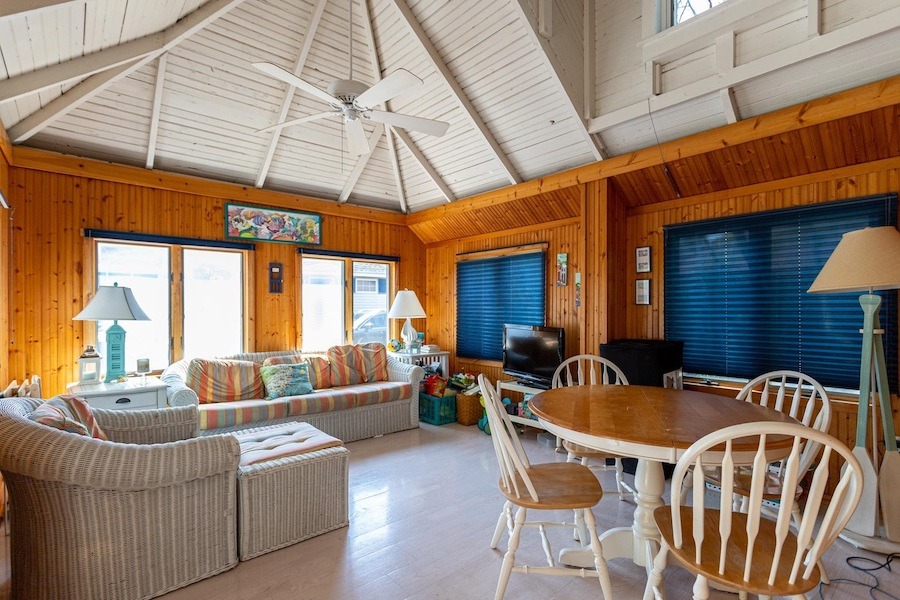 And it’s cute, like so many surviving Shore cottages are. It has a vaulted beamed ceiling in its main living area, which is open to the kitchen. 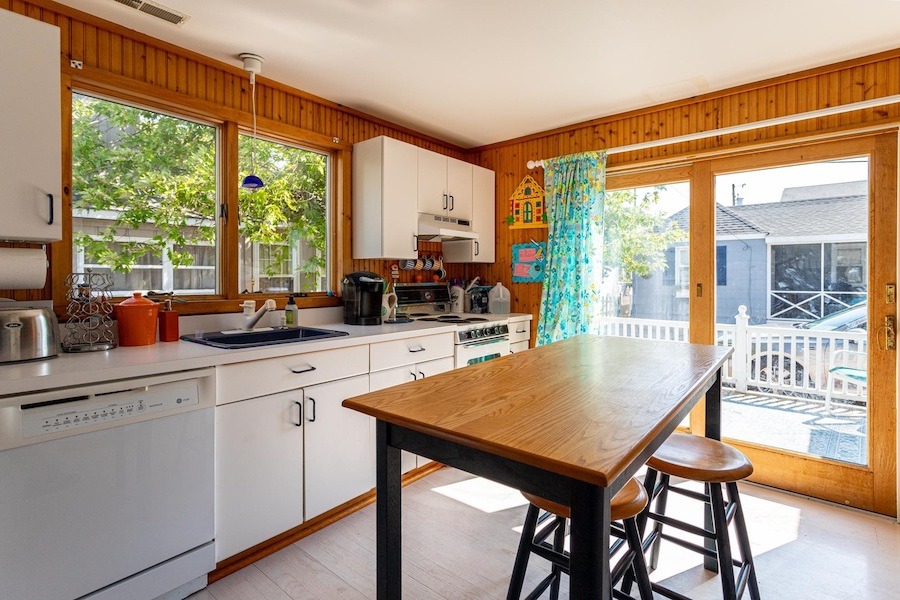 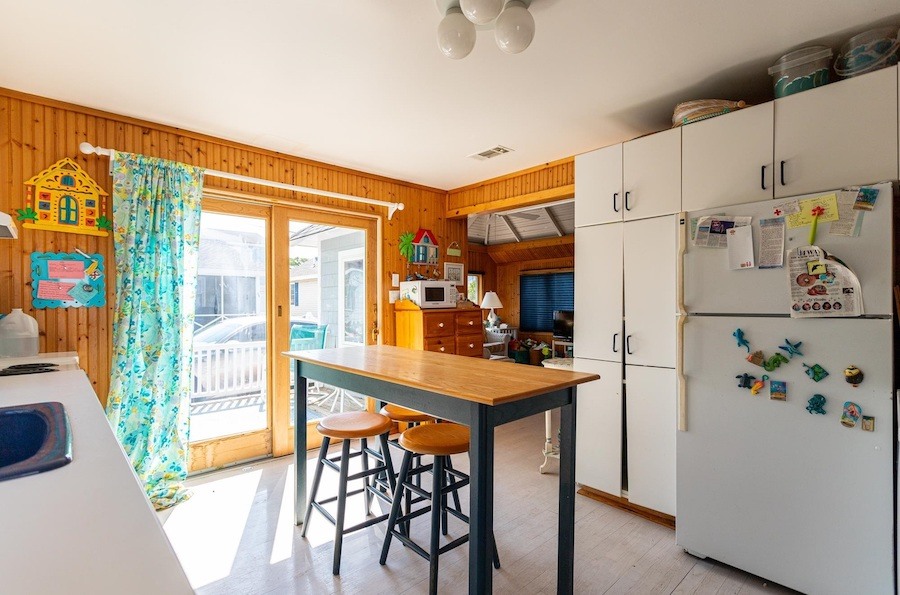 The kitchen is serviceable, but it could use some sprucing up, as the condition of some of its cabinets should indicate. Both it and the living room open onto the front patio entrance. 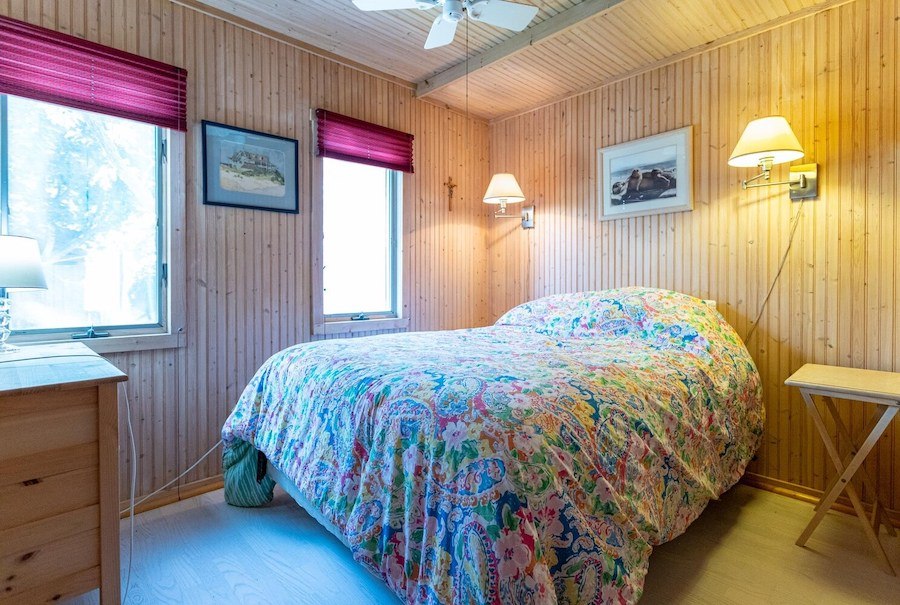 It has two bedrooms and one full bath. 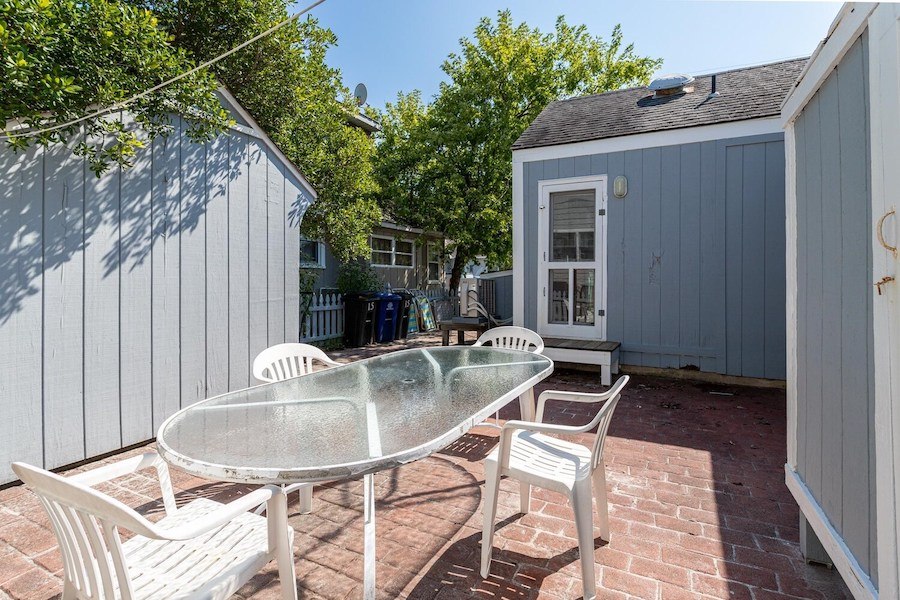 And it has a brick patio in the back.

So those are the reasons why this Stone Harbor cottage house for sale should stick around.  Here’s why it probably won’t:

It’s located just a block and a half from both beach and bay and an even shorter distance from the Stone Harbor Bird Sanctuary.

And it has only two bedrooms and one bath. Given how many of us like to invite friends and relatives down to visit when we’re at the Shore nowadays, this house simply can’t meet that demand.

And when I wrote this, I had assumed that this would mean this house gets torn down. But a reader wrote in to inform me that the houses on Stone Court are historically protected. This street was originally developed just before the United States entered World War I as a “bungalow colony” of modest houses working people could afford to buy or rent for Shore vacations. (You can read Stone Court’s origin story here.) The borough acquired the houses in the 1930s from the organization that rented them to vacationers, and since then, the houses have passed into private hands.

All this means that this house is quite likely a century old or more, as the original bungalows have not been demolished. And by the standards of today’s tony Stone Harbor, it’s definitely affordable. Buy it and you will own not only a throwback to Shore summers past but a piece of Stone Harbor history. And since the listing says that you can build additions to this house, you may be able to have your history and your friends and relatives over to visit you too.

OTHER STUFF: Surveys of the property are available for those already calling their architect about building an addition. This house is being sold in as-is condition.

Updated Sept. 4th, 10:43 a.m., to reflect information about the history of the house and of Stone Court.