This 1850s trinity in the middle of a block full of them has been updated in a way that preserves its character and charm. 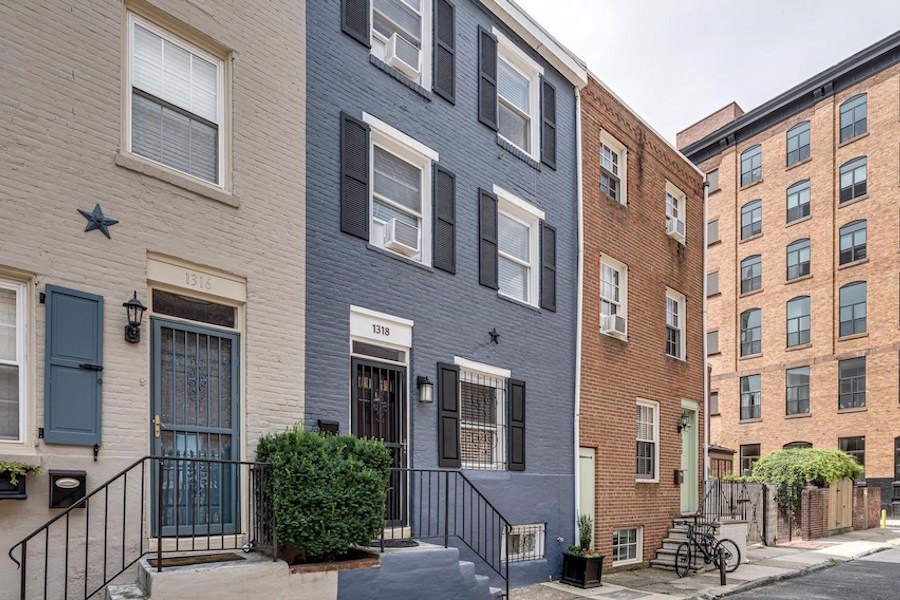 This handsome trinity on one of Wash West’s “little streets” dates to the mid-19th century, when the neighborhood was on its way to becoming Center City’s residential center. Today, this classic-yet-modern trinity remains centrally located at 1318 Addison Street, Philadelphia, PA 19147 | Bright MLS photos via BHHS Fox & Roach Realtors

Back around 1858, when this trinity in Washington Square West was built, Wash West had become one of the city’s most central — and varied — neighborhoods. The 34-year-old Musical Fund Hall at its northeast corner was about to be superseded by the American Academy of Music, two and a half blocks north of here. And the grand mansions that lined the main streets hid behind them little lanes like this one, filled with the trinities the working class called home.

Fast-forward 163 years and Wash West is still one of the city’s most central and varied neighborhoods. The Academy of Music remains the grand dame of Broad Street, currently undergoing one of its periodic facelifts. Some of those mansions have been carved up into apartments and condos, while others, especially on Delancey Street, either remain intact or have had their faded glory restored through rebuilds. And the working-class folks who filled trinities like this one have been replaced by a mix of college and university students, young professionals and young adults working in the service sector.

This trinity, like its neighbors, has survived intact through all these changes. Thus the “workforce housing” of the mid-19th century has become a reasonably affordable way for young — and not so young — professionals and creative types (among others) to enjoy life in the heart of the big city.

I think those folks will find this nicely updated trinity fills this need more than adequately. It’s a true classic trinity consisting of three rooms plus a bathroom on three floors, plus a kitchen in the basement. And it does have a nice extra or two thrown in. 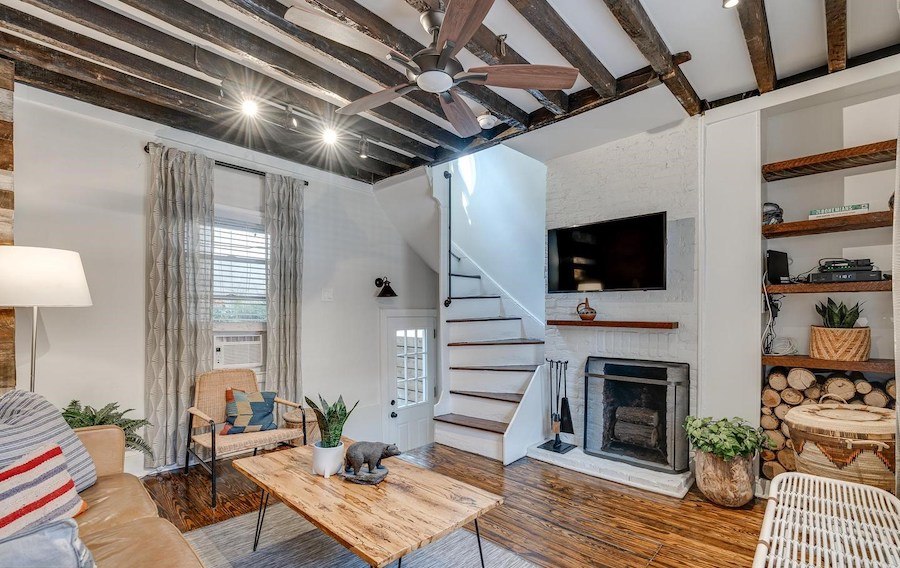 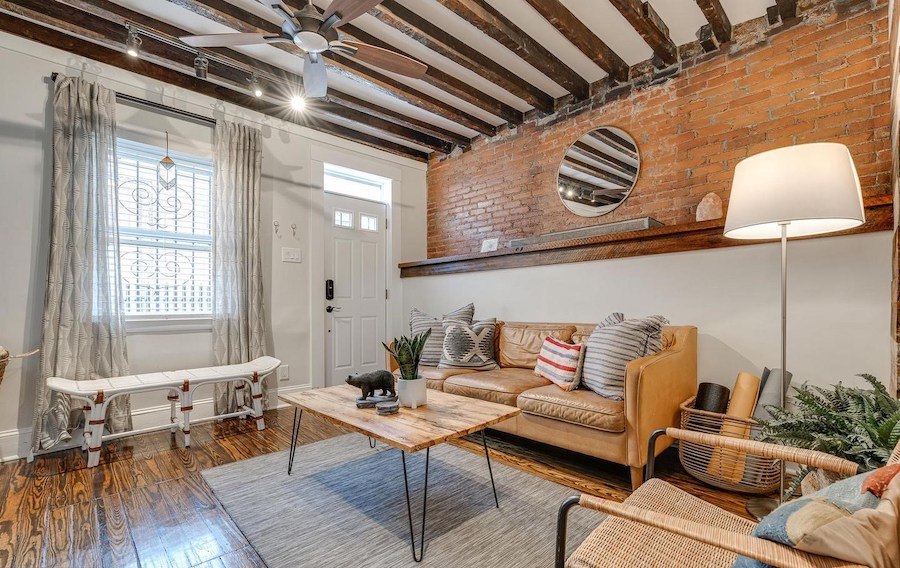 Yet it has a very contemporary feel, with its original fireplace surrounded by white painted brick, the built-in bookshelves next to the fireplace, and the built-out shelf with exposed brick above it on the opposite wall. 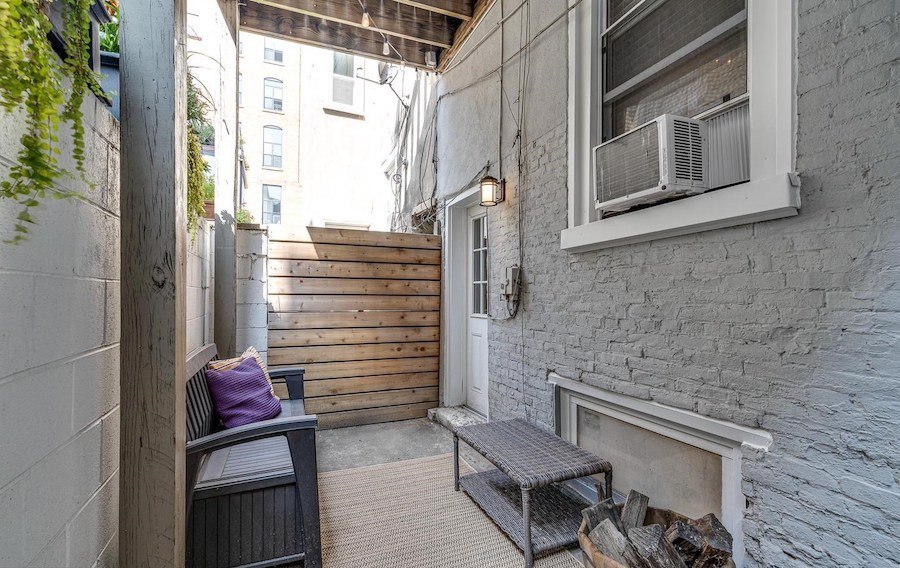 Steps lead down from the living room to a rear door that opens onto the covered rear patio, one of two outdoor spaces on this property. 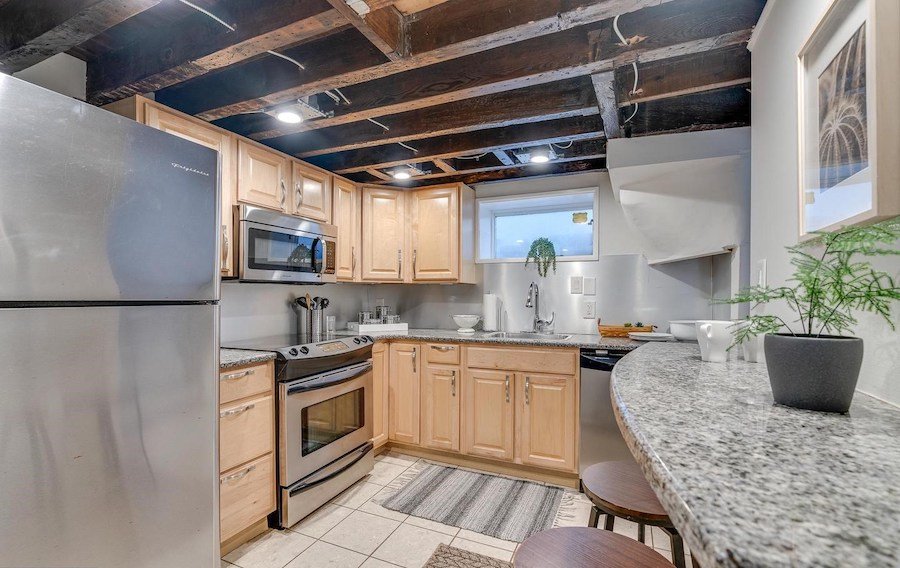 Down below, the kitchen also blends past and present in much the same way. High-hat recessed lighting, stainless steel appliances and a granite dining bar complement the blond traditional cabinetry and original beams supporting the floor above. You’ll also find the laundry down here. 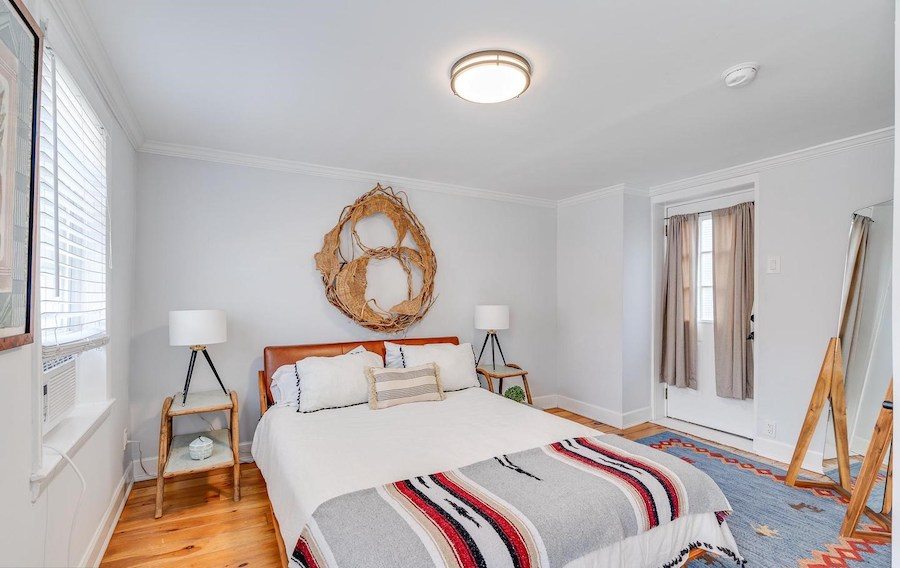 The two upper floors are more polished in appearance. The primary bedroom is on the second floor. 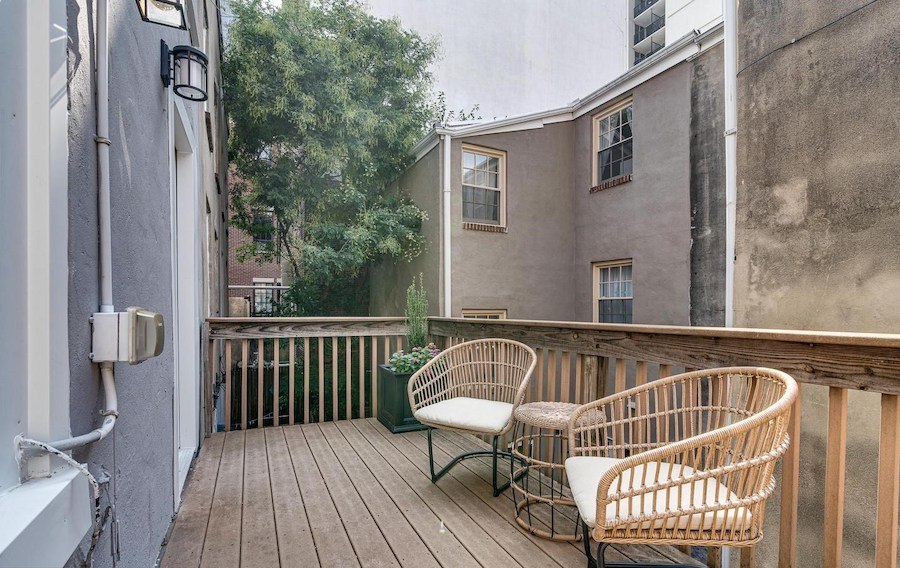 In back of it is the other outdoor space, its own private deck. 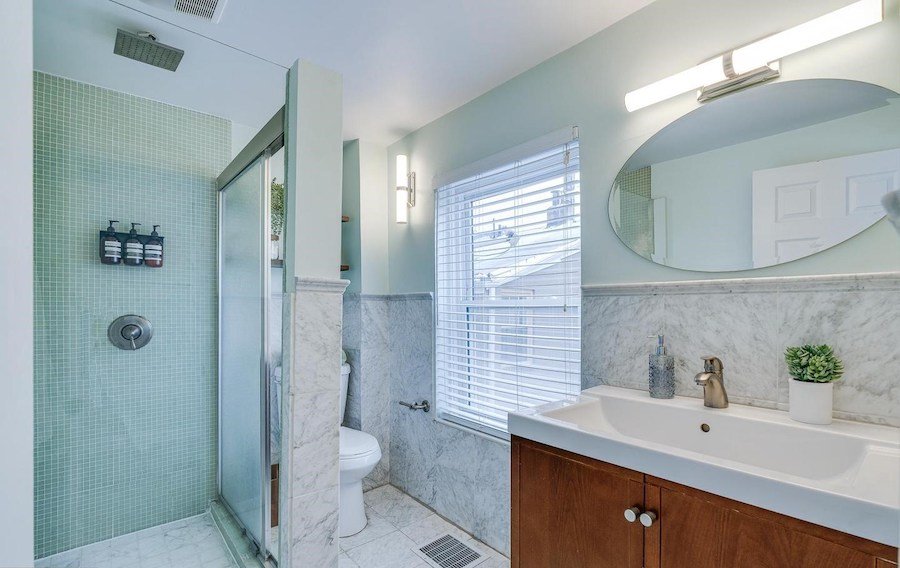 Make that “sort of private,” for your guests will make your way past this bedroom on their way up to the modern full bath on the top floor. 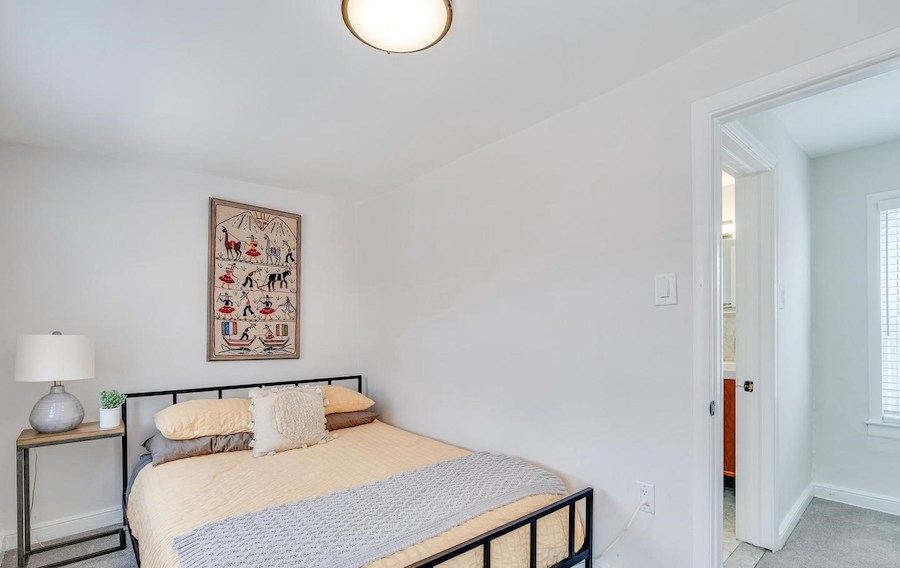 Next to it is the second bedroom, which could just as easily serve as a home office.

Thanks to its location, this updated Wash West trinity house for sale still puts you in the middle of everything. You’re just steps from the Last Drop Coffee House, Dirty Frank’s, Yellowtail Sushi, Sumo Sushi, Giorgio on Pine, and the Town Food Market, where you can get both hoagies and beer to go. Even more restaurants and delis are just a few blocks away on Pine, 13th, and South streets, and the Avenue of the Arts and the Kimmel Cultural Campus are just a block or so away.

And when you want to go somewhere beyond walking distance, you have two SEPTA bus routes and Lombard-South station on the Broad Street Line within a block or two of this house.