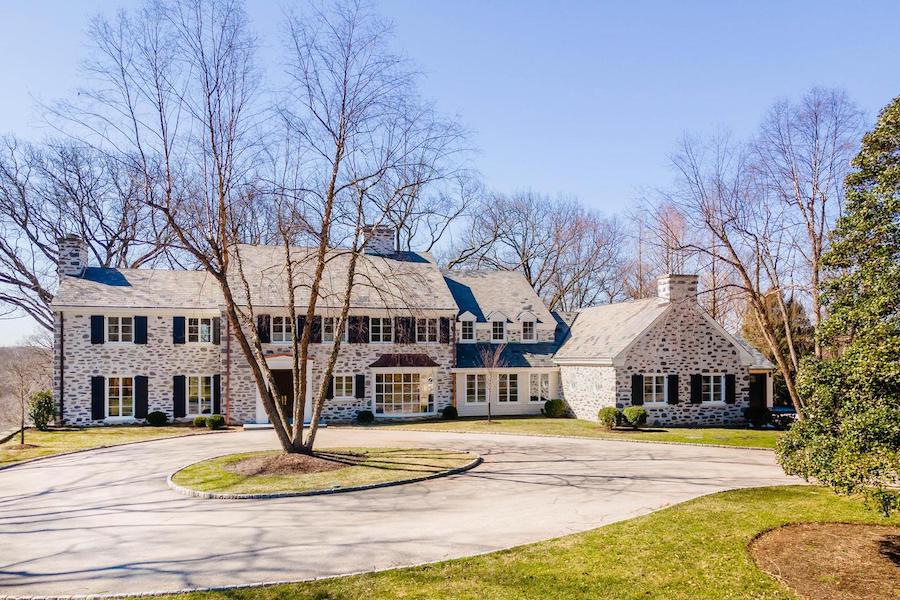 Chestnut Hill’s uppermost reaches are chock full of century-old center-hall Colonials like … wait, this one’s only 71. And on the inside, it’s even younger than that. You’ll find this midcentury marvel at 8800 Towanda St., Philadelphia, Pa. 19118 | Bright MLS images via BHHS Fox & Roach Realtors

The center-hall Colonial is the default freestanding house style of Philadelphia’s upper crust and has been for more than two centuries.

But by 1950, when this Chestnut Hill renovated Colonial house for sale was built, it had fallen out of favor somewhat. The modernist revolution had taken hold even here, and homeowners wishing to stay in tune with the times opted to build ranchers, split-levels and true modernist homes.

Most of the modernists chose to build their homes in East Falls, which contains a noteworthy collection of midcentury modern houses. A few daring souls built examples up this way as well, mostly in neighboring Wyndmoor. But as might befit the neighborhood that served as the in-city country retreat for Philly’s older money, tradition continued to hold sway on the Hill.

Hence this house, which looks about 50 years older than it is on the outside. But there are some clues to its actual age, and those clues no doubt helped guide Regan Kline Cross Architects and designer Balongue Design, who gave this house a total makeover recently.

The most prominent clues are the windows. The large bow windows in front and back are a midcentury design element that’s missing from the older Colonials that surround this house. The other windows also reveal their roots in the Moderne style of the decade preceding its construction.

As on the outside, so on the inside: The renovation combines the modern and the Moderne in a most attractive fashion that still respects this house’s traditional design. 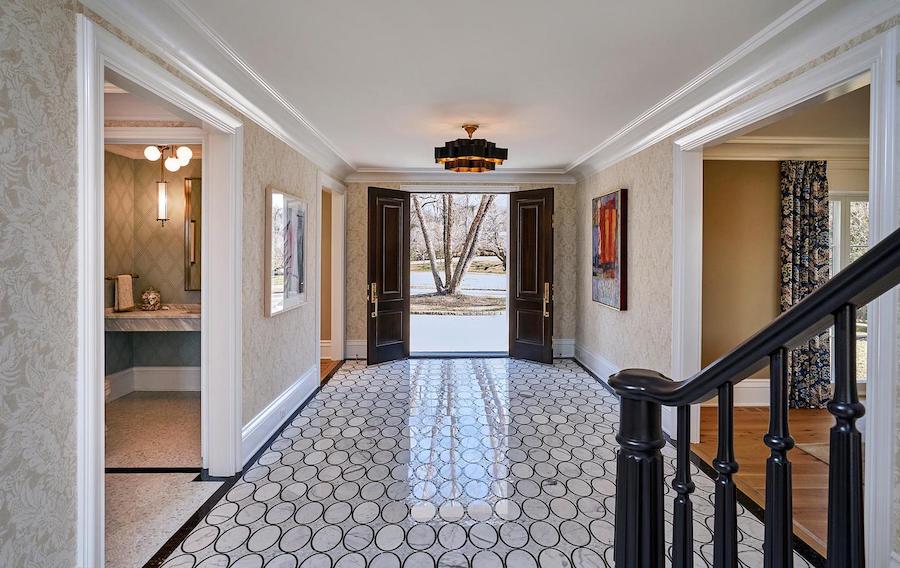 The foyer, of course, is a traditional center hall with a grand open staircase. But in style, the marble tile floor and ceiling light give it an Art Deco feel. 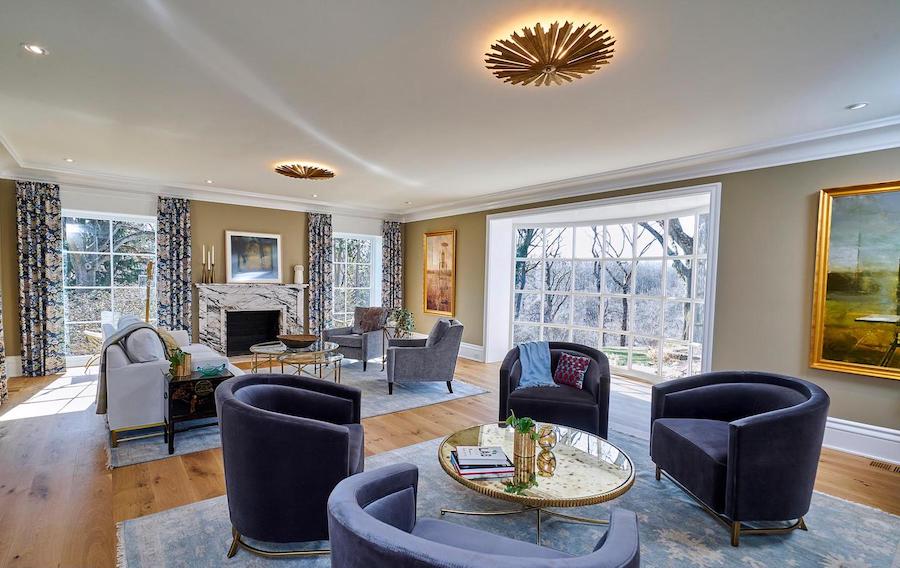 The light fixtures in the living room do the same thing, and the fireplace mantel strips classicism down to its bare essentials. 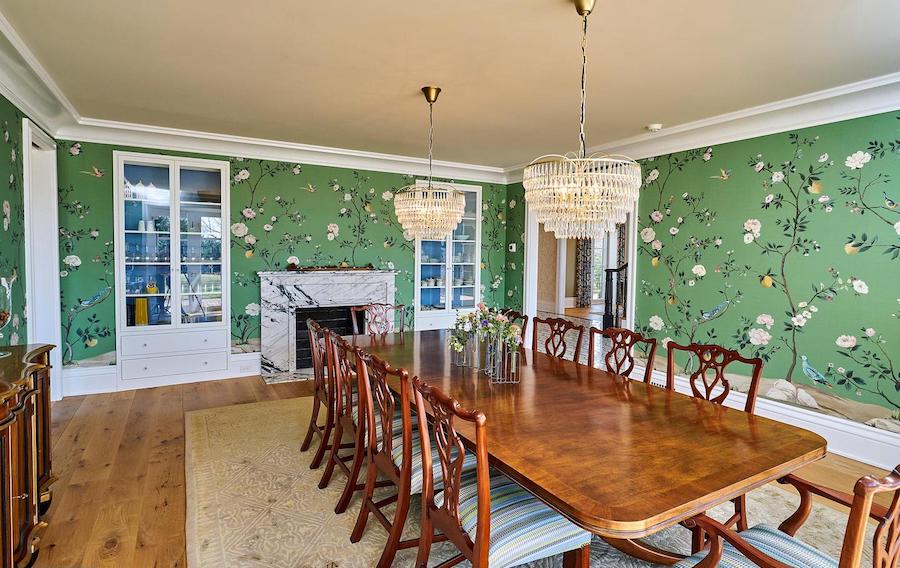 The formal dining room to the right of the foyer has a much more traditional feel thanks to its built-in china cabinets, its marble fireplace, its wallpaper and its traditional chandeliers. Its full-height bow window with doors leading to the rear terrace, however, gives its more recent origins away. 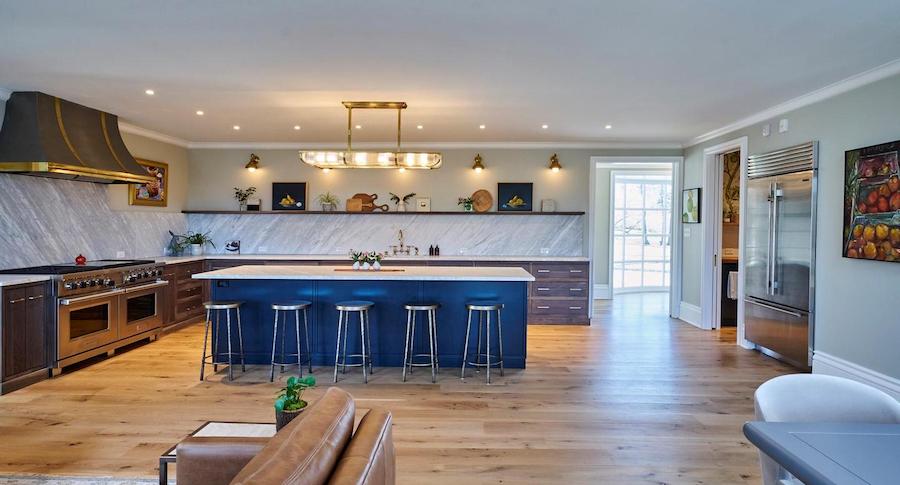 Beyond the dining room, however, the tide turns decidedly towards modernity. For starters, the kitchen has a decidedly Moderne appearance thanks to its Parisian-bistro light fixture over the center island, the flared fume hood over the Wolf gas range and the mix of dark blue and weathered gray walnut cabinets with Calacatta marble countertops and backsplashes. 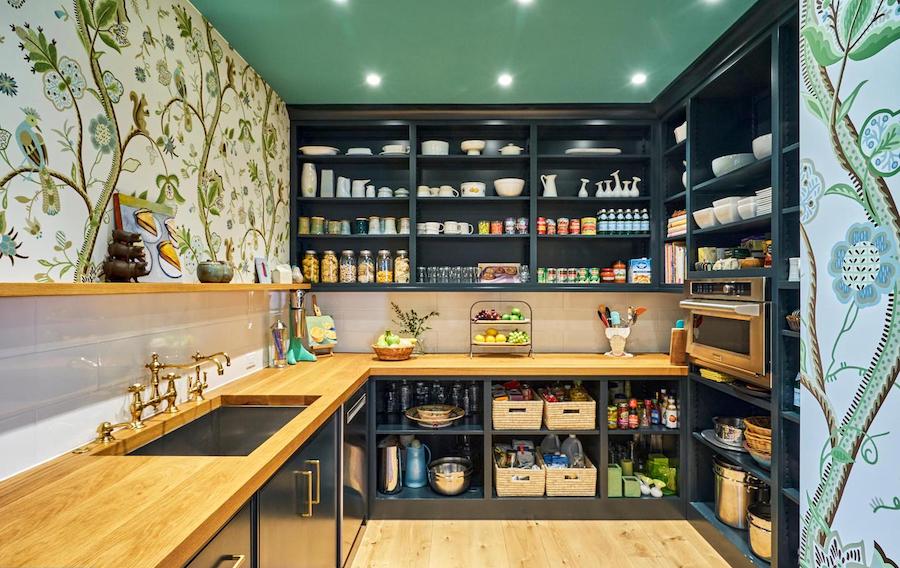 The wallpaper and faucets in its large walk-in pantry tie things to the past again, but otherwise, it too has a clean modern look. 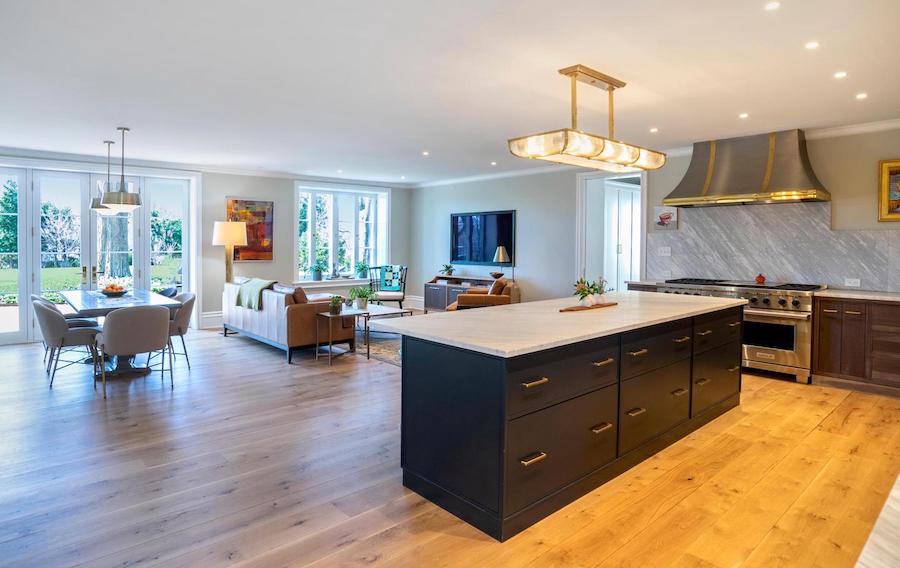 And the kitchen is the anchor of a decidedly modern innovation in domestic architecture, the everyday living suite. It faces an open den and a casual dining area that, like the dining room next door, boasts a full-height window with French doors that open onto the terrace. 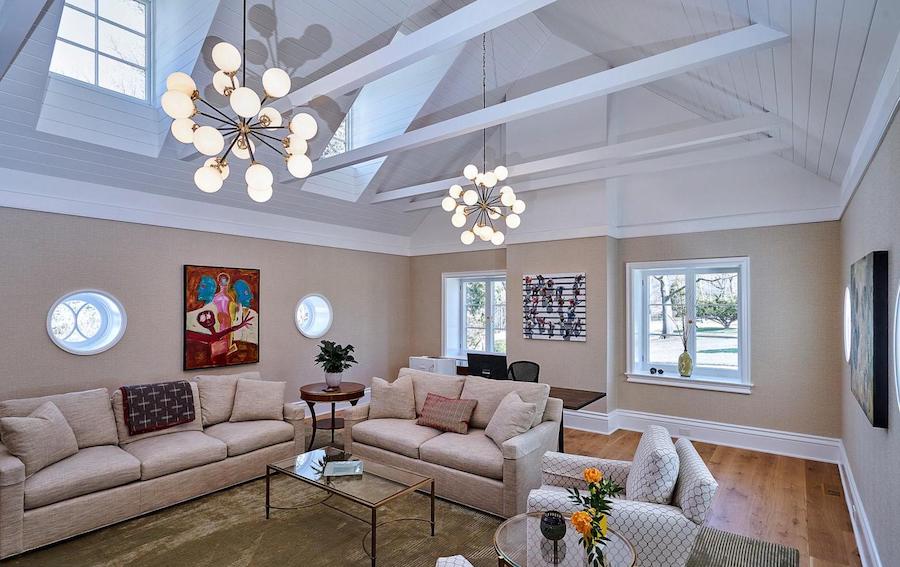 A corridor runs from the foyer past the bow window in front to reach the most modern of the main-floor rooms: A great room whose beamed cathedral ceiling with dormer windows for skylights makes it worthy of the term. 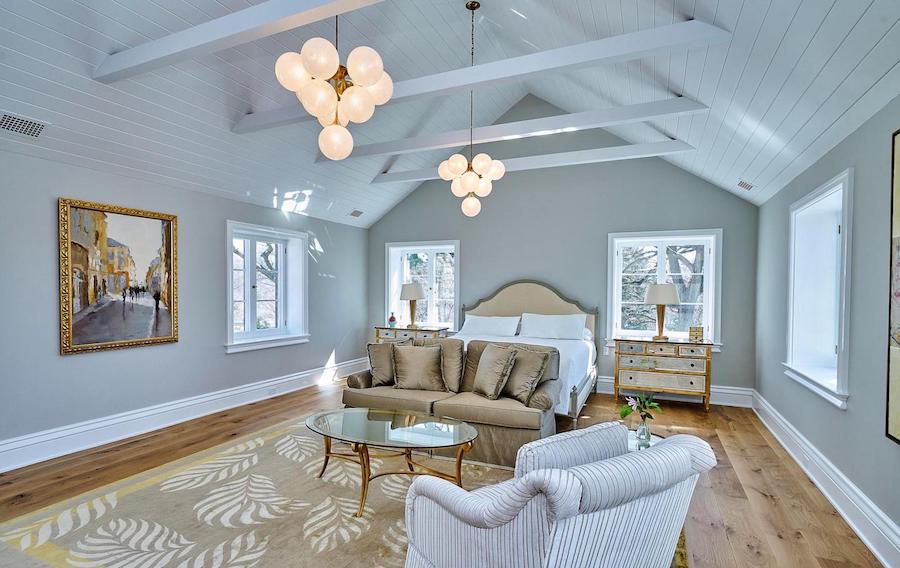 The same design aesthetic rules in the primary bedroom on the second floor. Windows on both sides give you views of the front driveway in one direction and the backyard and Wissahickon Valley in the other. 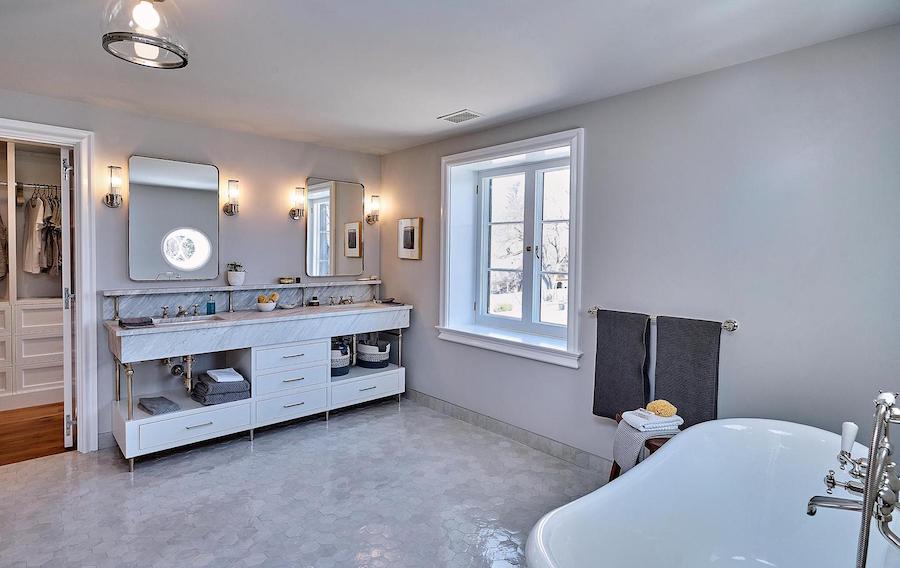 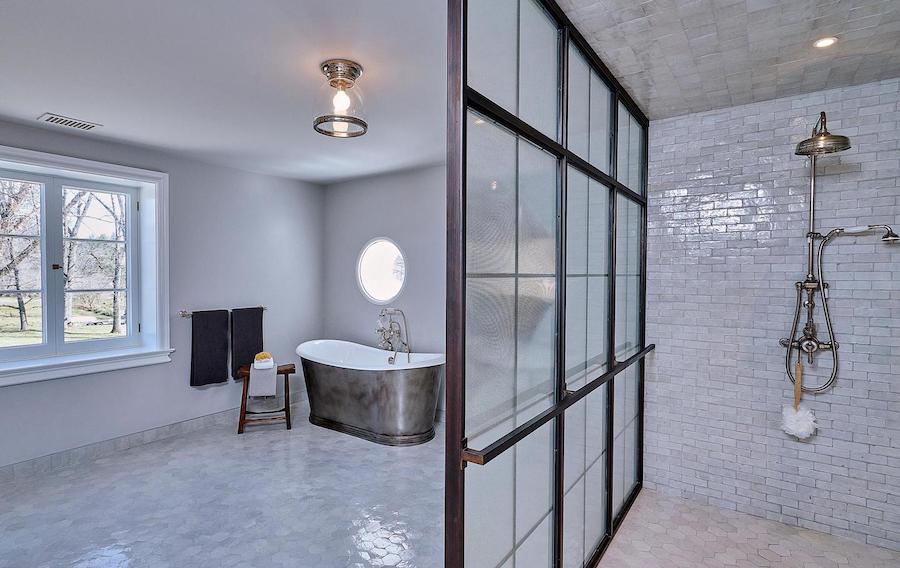 The primary bathroom combines elements of the Moderne and a touch of early-20th-century industrial chic in the factory-window-style divider separating its fully tiled shower from the tub and vanity. Three more bedrooms, each with its own en-suite bath, also occupy the second floor. 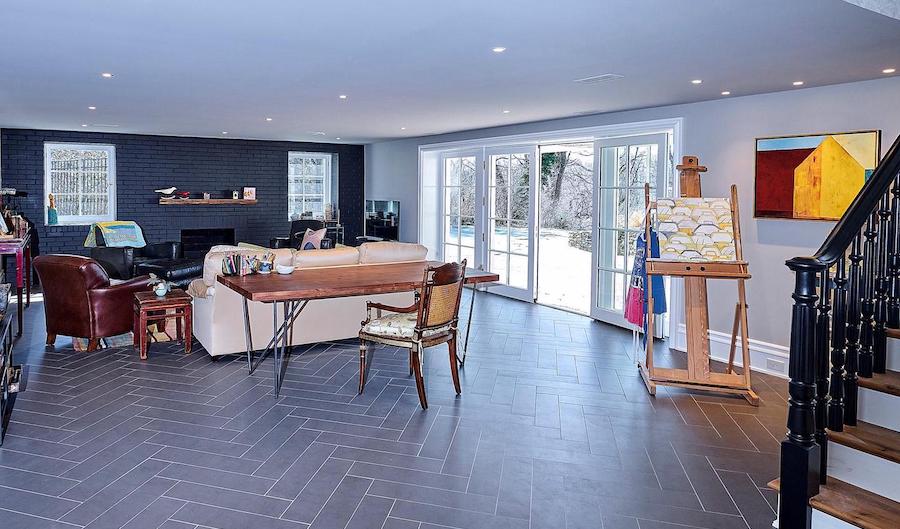 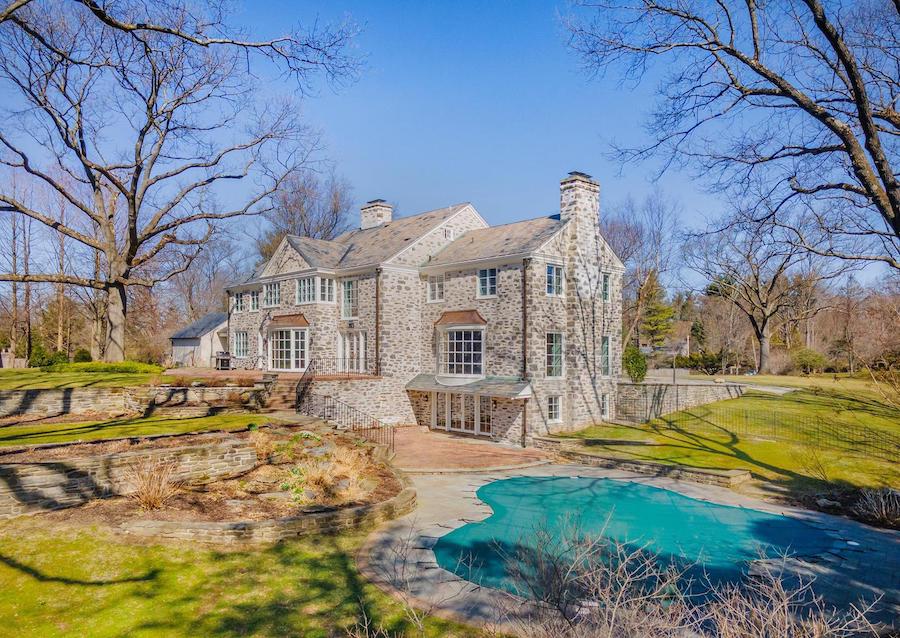 Down below, a finished basement rec room also has a full-height window with French doors that lead to the poolside terrace. Stairs lead from the pool up to the formal terrace and expansive backyard that overlook the Wissahickon Park. (This house’s 3.13-acre lot actually includes a narrow strip of land that extends eastward from its rear to the Rex Avenue trail leading into the park.) 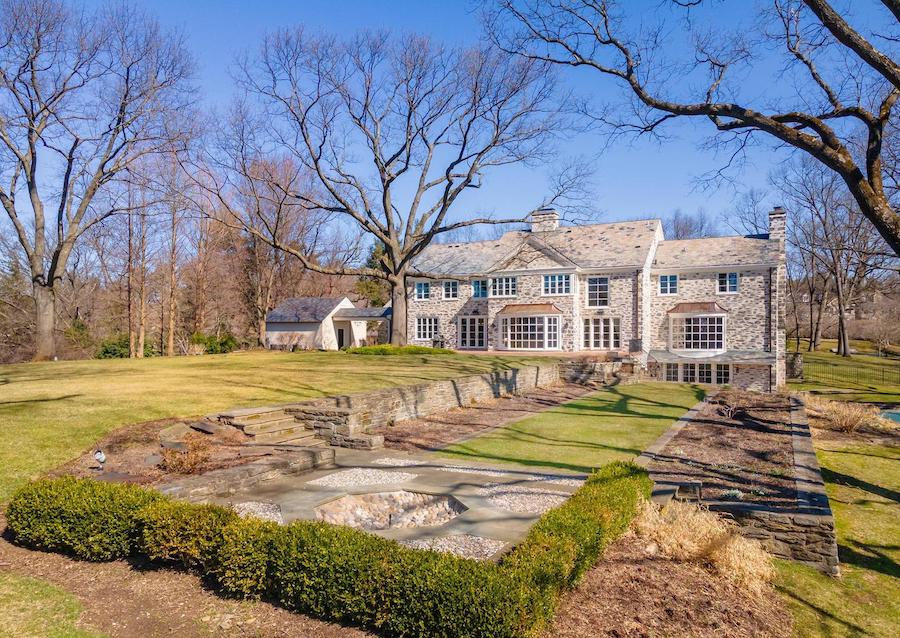 Besides being right next door to the Wissahickon Valley, this house is a short walk away from the top of Chestnut Hill and the apex of its shopping and dining district along Germantown Avenue. Highland station, the next-to-last stop on the Chestnut Hill West Regional Rail line, is an even shorter walk away.

City convenience and country privacy. Classic Colonial design and modern style. You could say that this Chestnut Hill renovated Colonial house for sale is the perfect blend of everything you want in a luxurious home.