We Moved From NYC to the Main Line During COVID, and Got an Extra 1,660 Square Feet in the Process 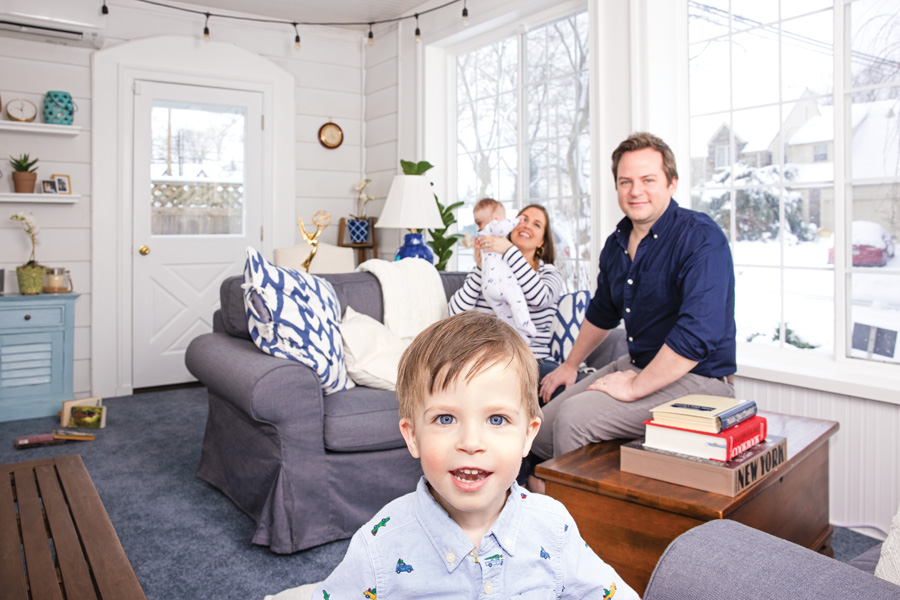 The sunroom is a “no-TV room” for the family. The room’s abundant natural light was a big draw for these Philadelphia natives who decided to move back to Philly during the pandemic. Photograph by Colin Lenton

Local natives Michael Kaufman and Allie Strawbridge moved to New York after they graduated from college, figuring if they could make it there, they could make it anywhere. Having made it, they got a hankering to come back to Philly. COVID gave that hankering a huge shove.

Where they came from: An 840-square-foot one-bedroom apartment in Murray Hill, on Manhattan’s East Side

Where they landed: A 2,502-square-foot, three-bedroom expanded Cape Cod colonial in Merion Station, purchased for $690,000

How they got there: The couple both landed jobs at Nickelodeon after graduation nearly 20 years ago, and they still work there, producing a program for preschoolers. They enjoyed the restaurants, nightlife and culture Manhattan has to offer. But then they had their first child, and some of the city’s assets became liabilities: “It’s one thing to make your way on a crowded subway platform when it’s just you,” says Strawbridge, “but when it’s you and a stroller, it’s something you don’t want to do.”

Because Kaufman hailed from Huntingdon Valley and Strawbridge grew up in Gladwyne, Philly had exerted a pull on them for much of the time they lived in New York. Moving back to Philly was a long-term dream of theirs since they married in 2016. It wasn’t until the pandemic hit and Allie became pregnant with their second child that they felt the urge to start their moving process. At first, they contemplated moving to a bigger apartment in Brooklyn, where Kaufman lived before he started dating Strawbridge, or North Jersey. But as Kaufman puts it, “Why would we do a half measure when Philadelphia is only a little bit further away?”

Why they chose to live where they live: Kaufman and Strawbridge knew they wanted more space to work and room for their kids to play. They also wanted easy access to Center City’s attractions. They’d originally considered renting a townhouse or condo in Center City, but when a real estate agent they met online a few years ago, Amy Schwarz of Compass, waved an attractive house for sale in Merion Station in front of them, “We jumped on it,” says Kaufman.

They weren’t the first to bid on the house, and they might not have gotten it if a higher cash bid hadn’t fallen through. According to Strawbridge, though, what sealed the deal was a love letter Kaufman wrote about the house and sent to the seller’s agent, Brian Taff of Keller Williams Main Line. (Does that name sound familiar? It should: Taff anchors the noon and 4 p.m. Action News on 6 ABC.)

Biggest surprise: Learning about “the joys of homeownership” on the fly. “We’d been renters all our lives, and if something broke, we would be like, ‘All right, call the super,’” says Kaufman. As owners, they quickly learned that they were now “the super.” One of the first things they had to fix: the house’s obsolete knob-and-tube electrical wiring — work that delayed their move-in a few weeks after they closed the sale in July. But even with the responsibility for upkeep, neither would go back to renting. For one thing, Kaufman says, home ownership is far cheaper: “Our mortgage is $1,000 a month less than our rent in Manhattan.” Even after they tack on the cost of commuting to New York once they return to the office, they’ll still come out ahead.

Published as “From the Big Apple to Back Home” in the “On the Move” feature in the March 2021 issue of Philadelphia magazine.