A Look Inside the New Marriott Old City

Out: all that faux-Colonial stuff (well, almost all of it). In: a frankly contemporary design and some sweet new amenities. 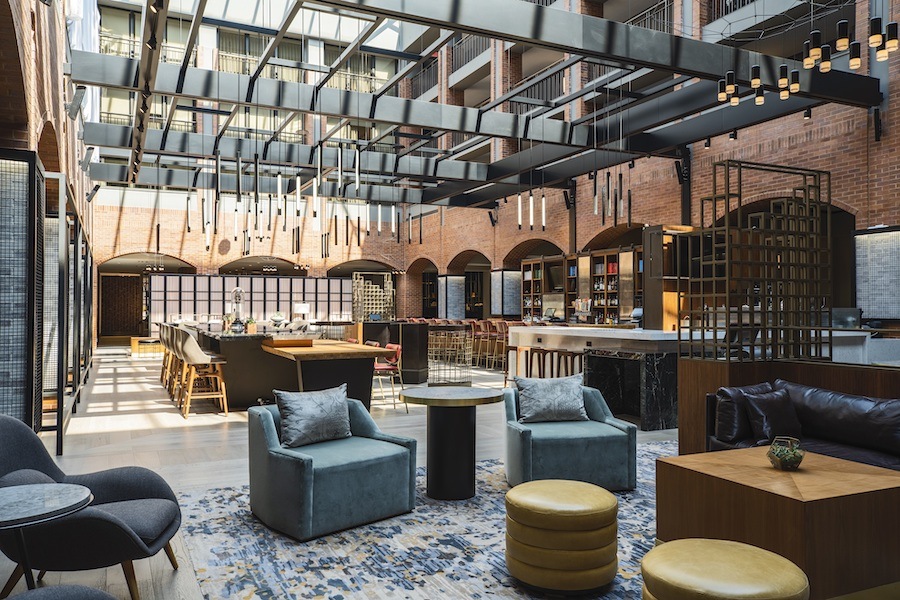 There’s a certain segment of the population, including many hotel designers, that equates luxury and elegance with the traditional Colonial look. That’s why one often runs across hotel buildings that look all modern and simple on the outside, but once inside, they’re all broken pediments, crown moldings, bejeweled chandeliers and wainscoting.

That pretty much describes the cognitive dissonance one experienced upon entering the Sheraton Society Hill Hotel on Dock Street. Then the Buccini Pollin Group got its hands on the property and brought in Krause Sawyer to reimagine it and PM Hotel Group to run it. 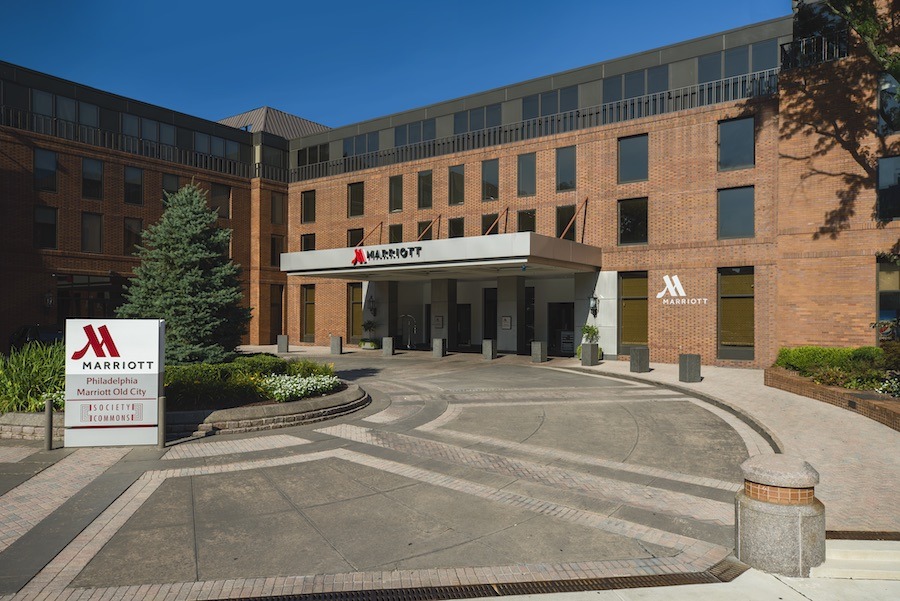 The makeover left the hotel’s exterior mostly as it was, save for a brighter canopy over the main entrance.

It reopened in late January as the Philadelphia Marriott Old City Hotel. And it’s still elegant. But now it’s as modern on the inside as it is on the outside.

New York-based Krause Sawyer — now known as Sawyer & Company — has a penchant for designing ultra-modern spaces with a boutique-hotel ambience even for big chains like Marriott. But in their multimillion-dollar makeover of the old Sheraton, its new owners still wanted to maintain some continuity with its neighborhood’s colonial and 19th-century maritime heritage. 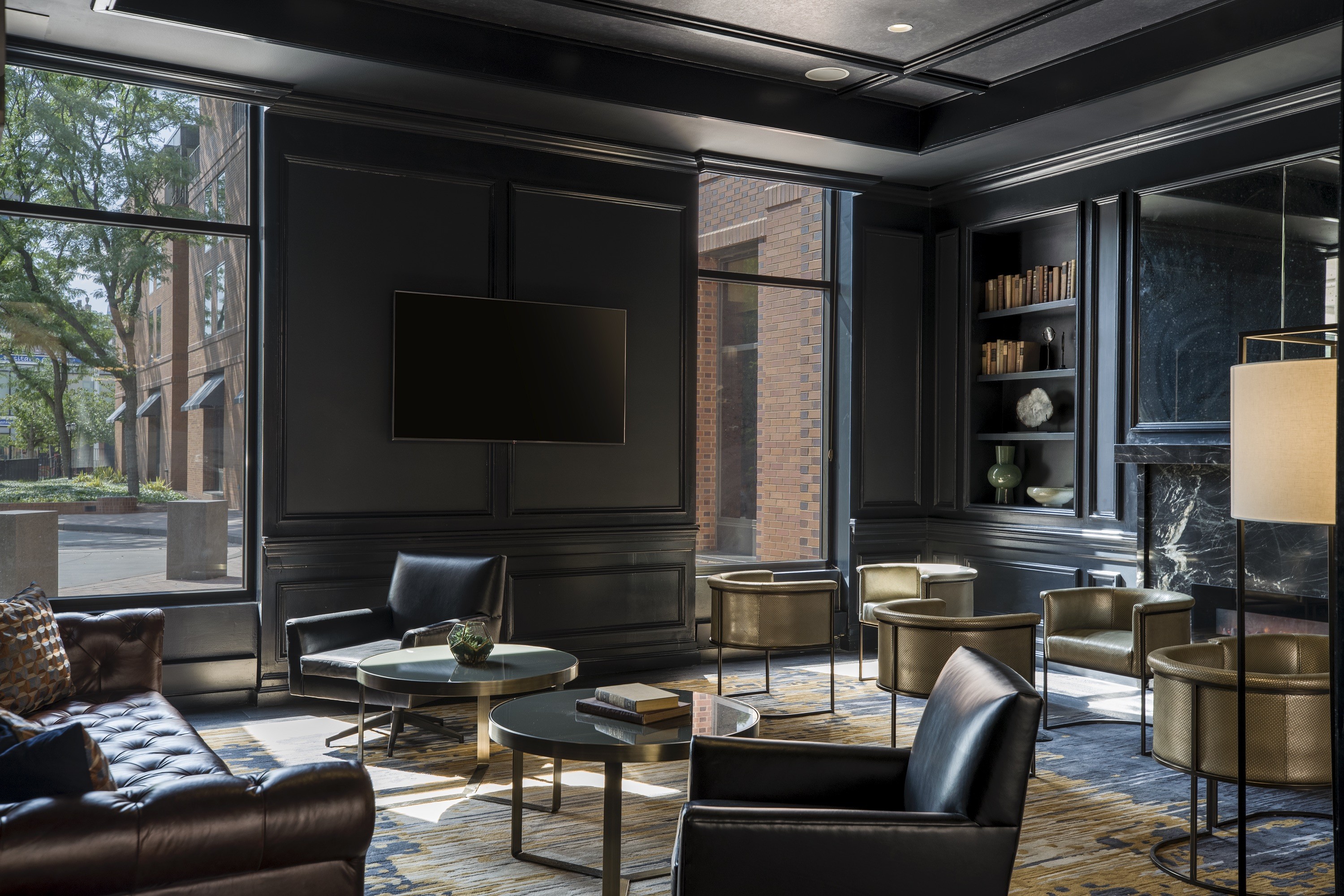 So it is that spaces like the library and the Hamilton Room, the Marriott Old City’s main function space for wedding banquets and similar events, have a more traditional look and feel about them. Yet their classicism is also tempered and offset by a distinctly modern approach to things like lighting, furniture and accent walls. 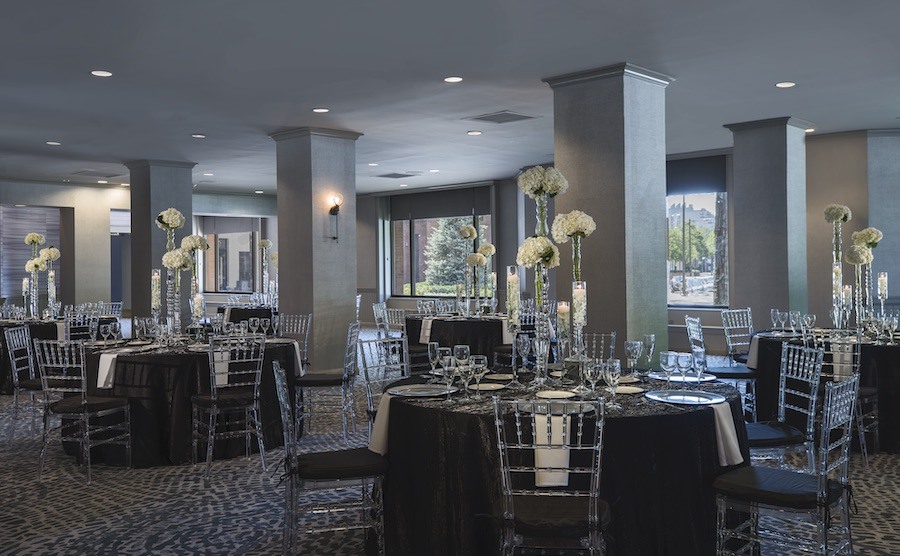 The Hamilton Room, the more contemporary of the Marriott Old City’s main ballrooms, configured for a banquet

In the hotel’s grand ballroom, however, the modern elements get drowned out by the whole-hog faux-Colonial basic design and the huge traditional crystal chandeliers. This room looks like it had been imported from the Sheraton Society Hill intact.

But the rest of the hotel got the full extreme makeover, and it’s now a modernist knockout. The hotel’s contemporary bones now support spaces with a more urban-chic feel that’s more in keeping with Sawyer’s design philosophy. The color palette is at once warm, bright and golden, with whites, off-whites, tan and medium brown wood and golden colors dominant. 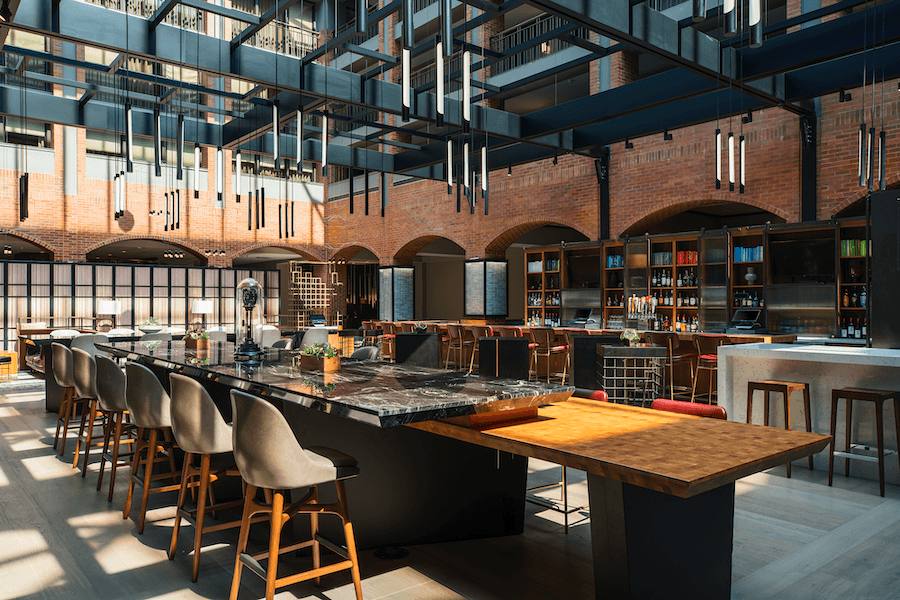 In the lobby bar, steel beams and lighting in black provide contrast to the brown brick atrium; the black is echoed in the granite of the bar counters and tabletops. 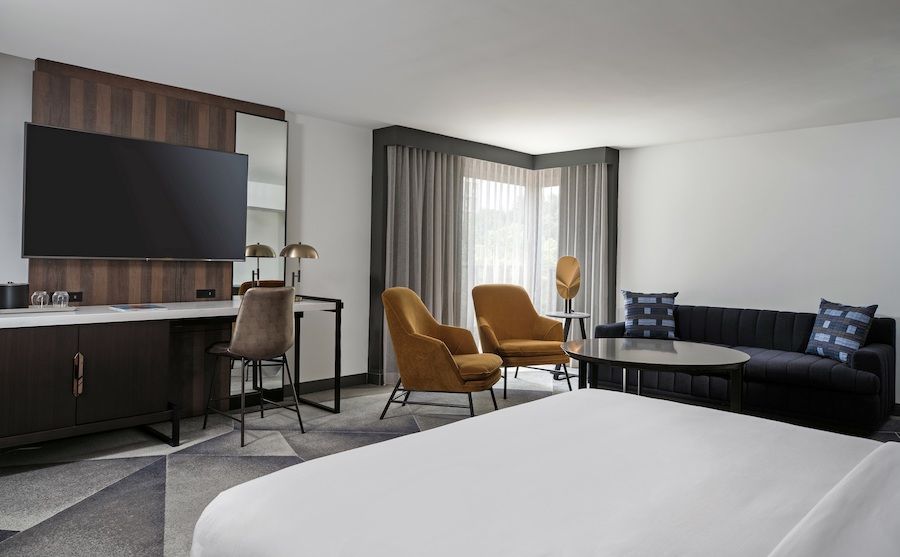 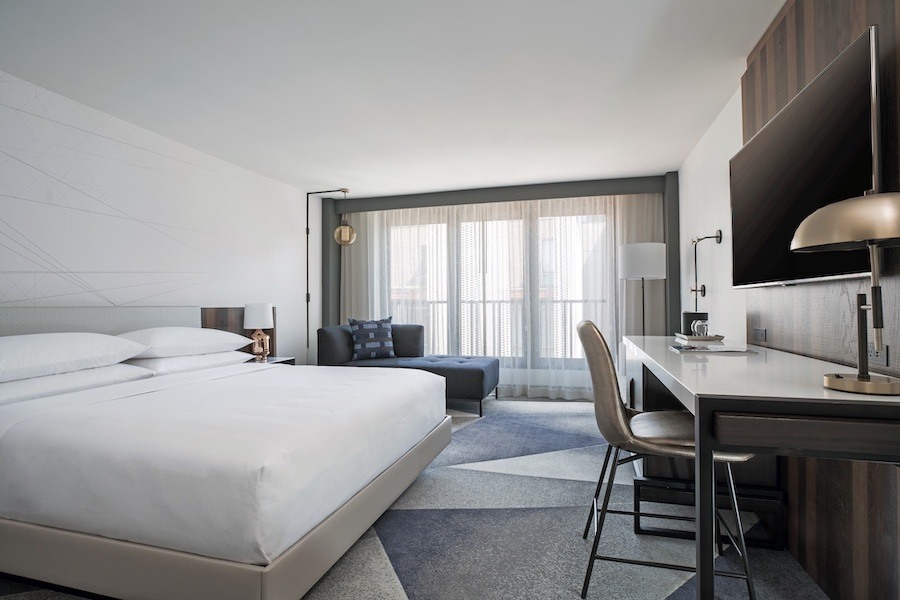 The guest rooms get just a touch of the industrial in both their light fixtures and the decor surrounding their doors. 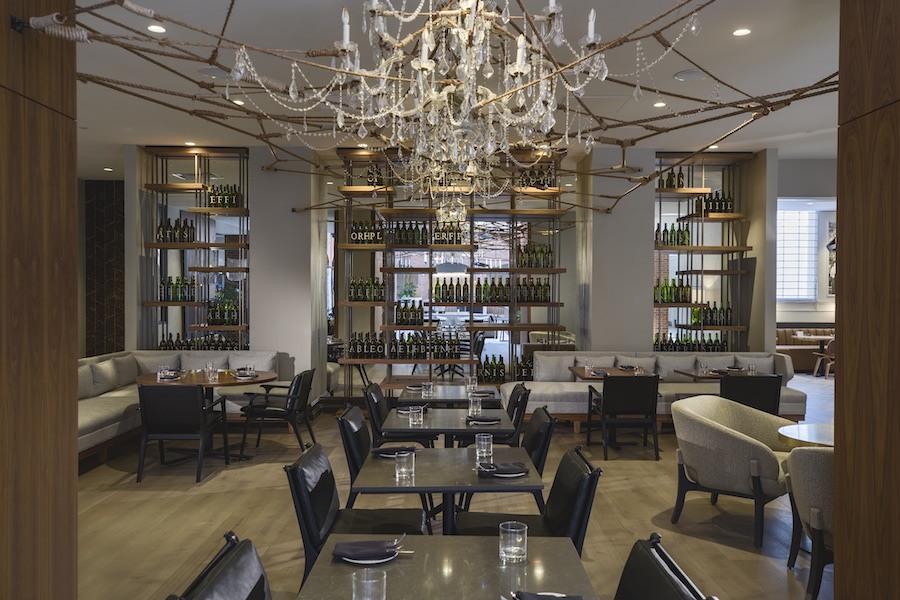 And the Society Commons restaurant features chandeliers interlaced with ropes intended to tie the space to Old City’s seaport past. 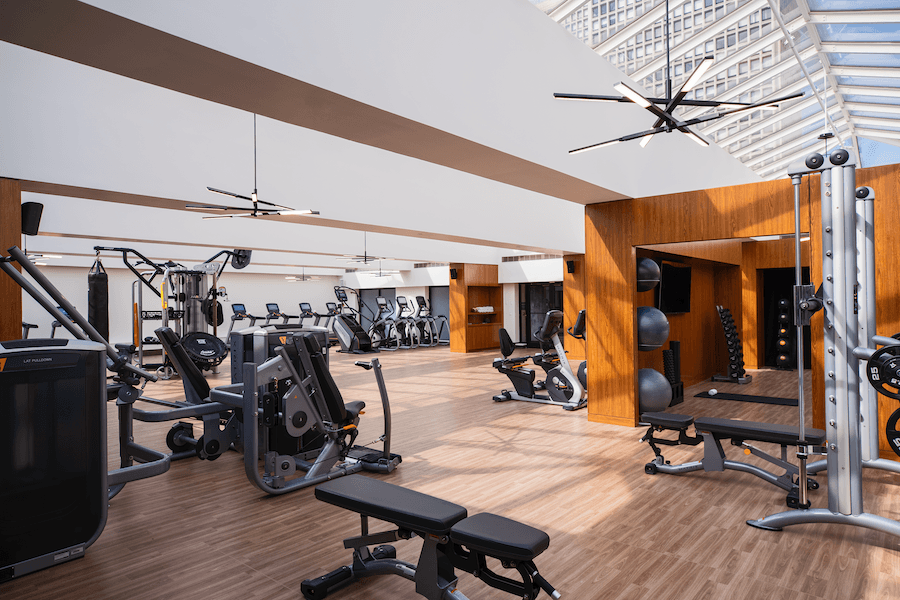 The makeover also gave the hotel some new amenities. One of them is the fitness center on the top floor, in the space that had housed the Sheraton’s pool. Its huge skylights give the enclosed space an outdoor feel. 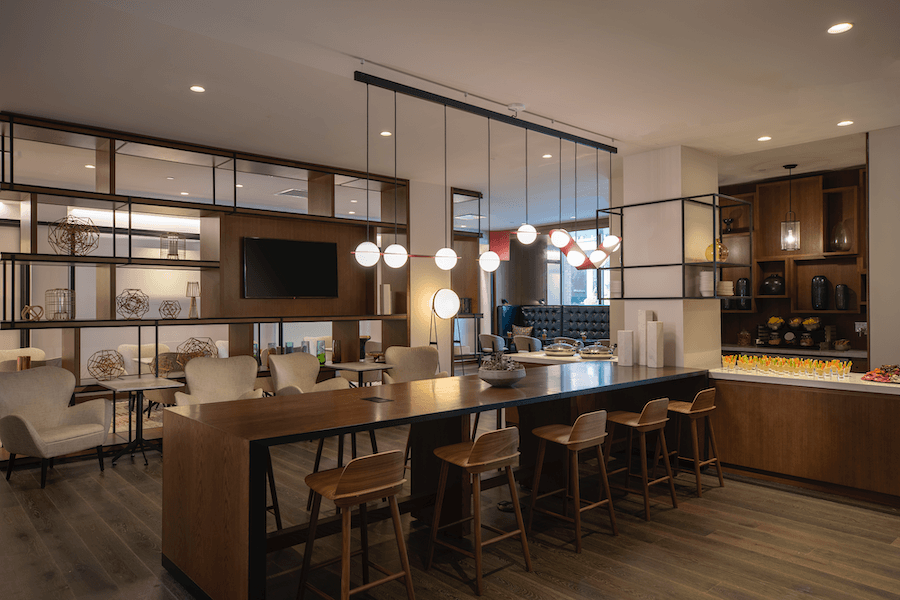 The M club at the Marriott Old City

Another is the city’s first M Club, a lounge open to members in the top two tiers of Marriott’s loyalty program. Those guests can work, relax, grab a snack or light bite and recharge in a bright space that is at once open and intimate.

Joseph Bojanowski, president of PM Hotel Group, said this about the redesign in a news release: “While we have totally reimagined this hotel and are now part of the iconic Marriott brand, guests will still experience what they have come to love about this historic 33-year-old hotel.”

Post-makeover, maybe that should be “33-year-young hotel.”