These two houses, built by the man who forged Rose Valley for its founder, are being sold for the fifth time in their history. What makes this truly rare is that they're being offered on the market. 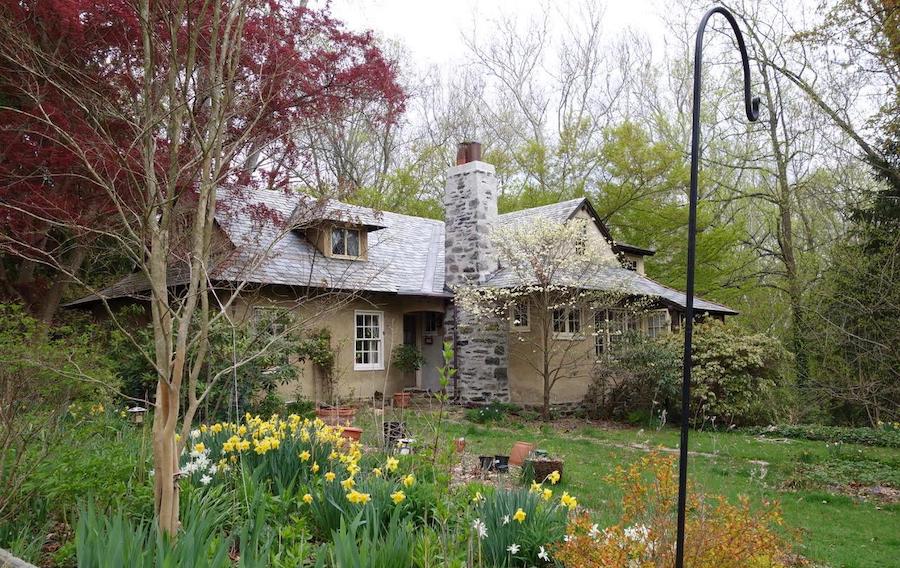 Have you ever driven through the Delaware County hamlet of Rose Valley and said to yourself, “This place looks very special. I think I might like to live there someday”?

If you have, better act now, for a rare opportunity to live in Rose Valley just opened up.

Here’s the short version of that history: The bosky borough sits on land that surrounds a mill that burned down in 1885. In 1901, architect Will Price and several associates bought about 80 acres of land around that mill in order to establish a utopian colony following the principles of the Arts and Crafts Movement, which held up independent artists and craftspeople as the basis for an alternative to industrial society.

That alternative proved short-lived, but those who promoted it turned to developing the land for residents commuting from Philadelphia as a way to keep the community alive. One of those people was Herbert Walton, who was the builder of most of the houses Price built in Rose Valley between 1910 and 1930.

The first five Italianate houses Price and Walton built in 1910 sit just to the south of this one, on the other side of the deep valley through which Vernon Run flows. They were added to the National Register of Historic Places in the 1990s, and the entire borough became a National Register historic district in 2010.

Walton built this storybook cottage and forge for himself around 1924. The cottage, the larger of the two houses, served as his residence; the smaller one was where he ran his iron forge. Rose Valley’s unique wrought-iron street name signs issued from this smaller house.

The “cottage” — with 3,026 square feet of above-ground space plus a half-finished walkout basement, it’s on the large side for a cottage — sits on top of the steep hill that slopes to the south towards Vernon Run. Quite likely, the house was designed by Walton’s architect brother William, who was a partner in cousin Will Price’s firm. 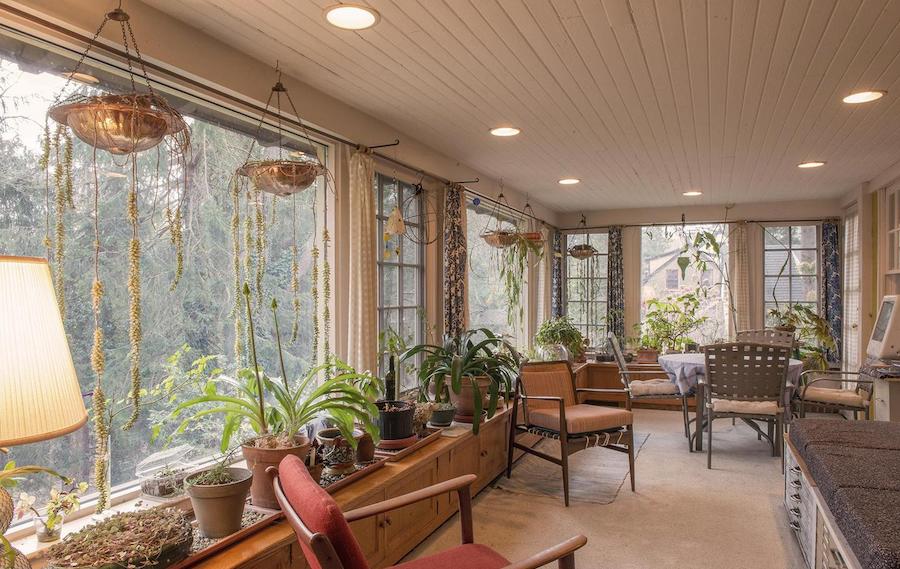 The south-facing rooms in this house thus get lots of sunshine filtering through the trees that line the valley. And the sunroom, with its picture windows, offers unrivaled views of that valley. 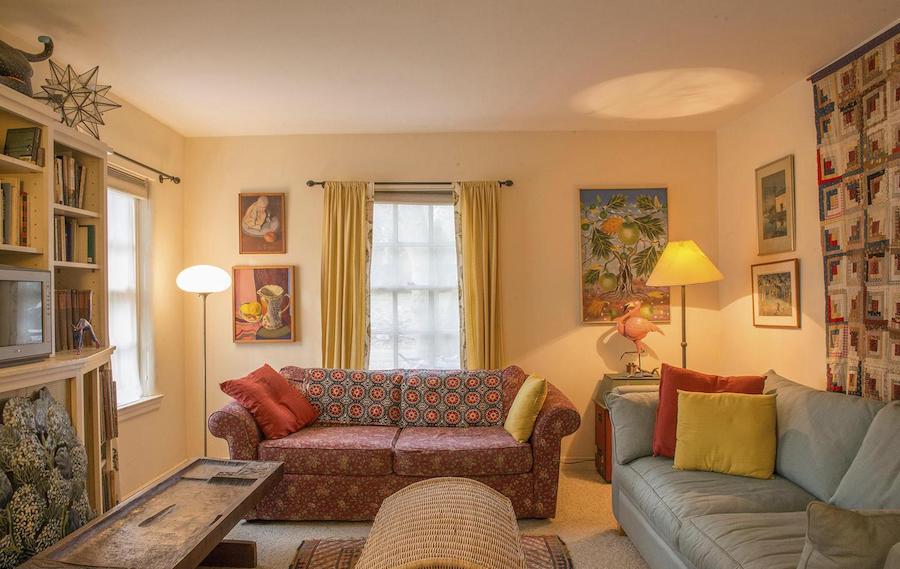 Like most of the other houses in the borough, the Walton cottage has a unique layout and distinctive personality. Sand from nearby Ridley Creek was used to make the stucco that covers its walls, and its rooms are arrayed in a sort of pinwheel fashion on both of its two above-grade floors. 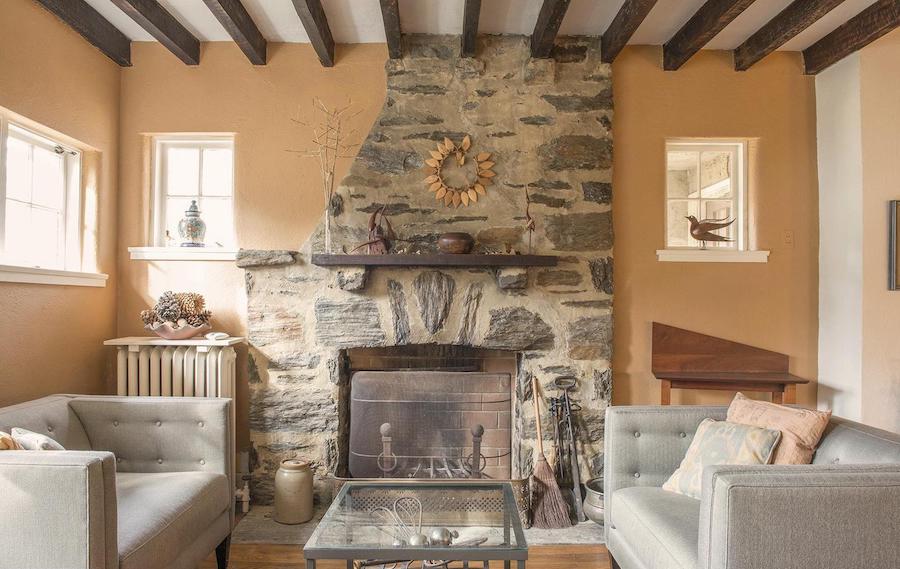 To the left of the foyer lies a living room with west-facing windows. To its right is a den with beamed ceiling, wood-burning fireplace and doors leading to the sunroom. 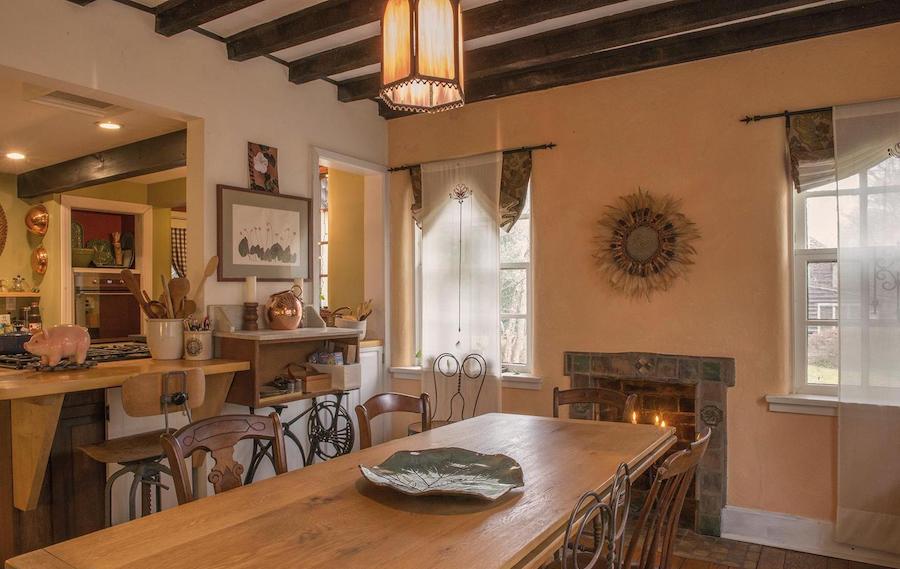 Both the den and sunroom connect to the beamed-ceilinged dining room, which has a decorative fireplace. 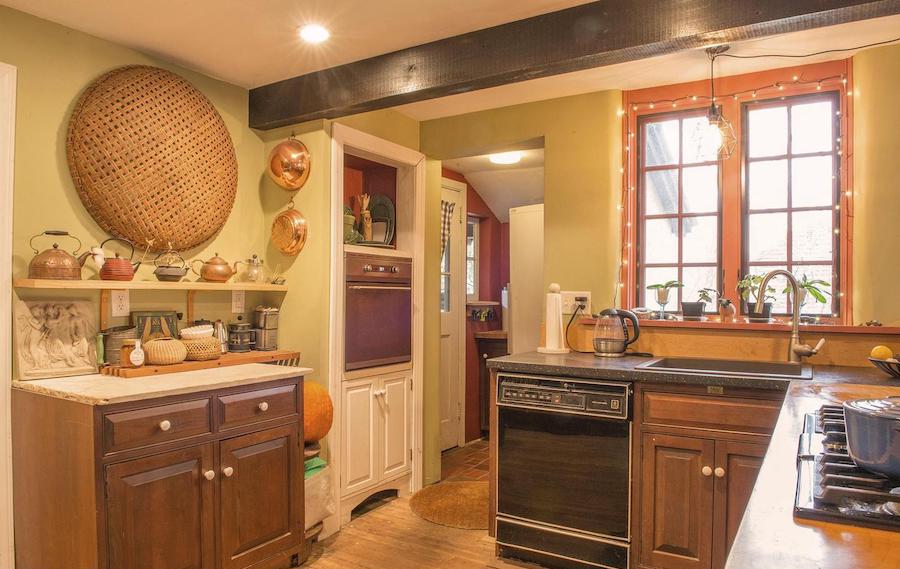 A counter with bar seating joins the dining room to the kitchen, whose refrigerator lives in an anteroom next to it. That anteroom, in turn, leads to the first-floor bedroom and bathroom, and the bedroom connects to the living room via the hallway to the foyer. 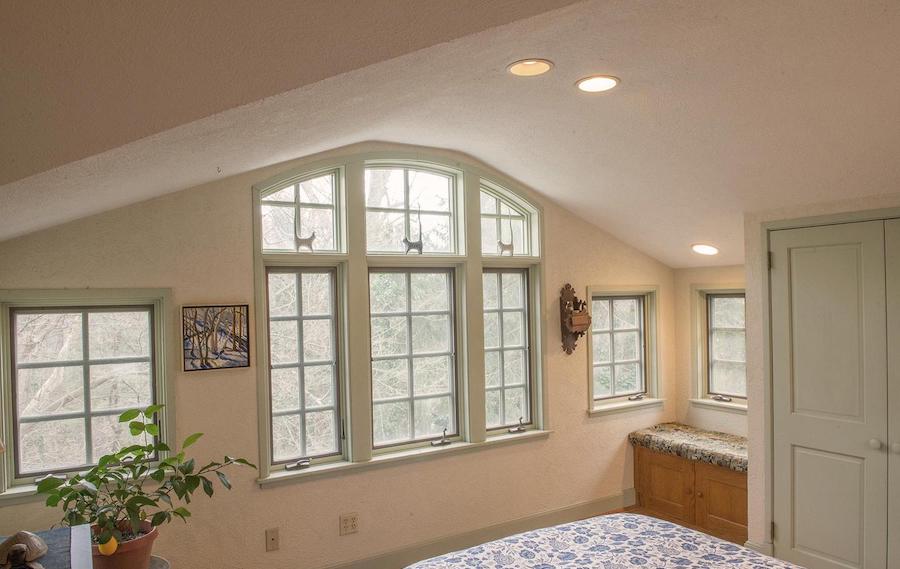 Most of the upper-floor bedrooms require you to climb or descend a stair or two from the second-floor hallway. The master has a large south-facing window. The bathrooms feature attractive tiles in a variety of colors. 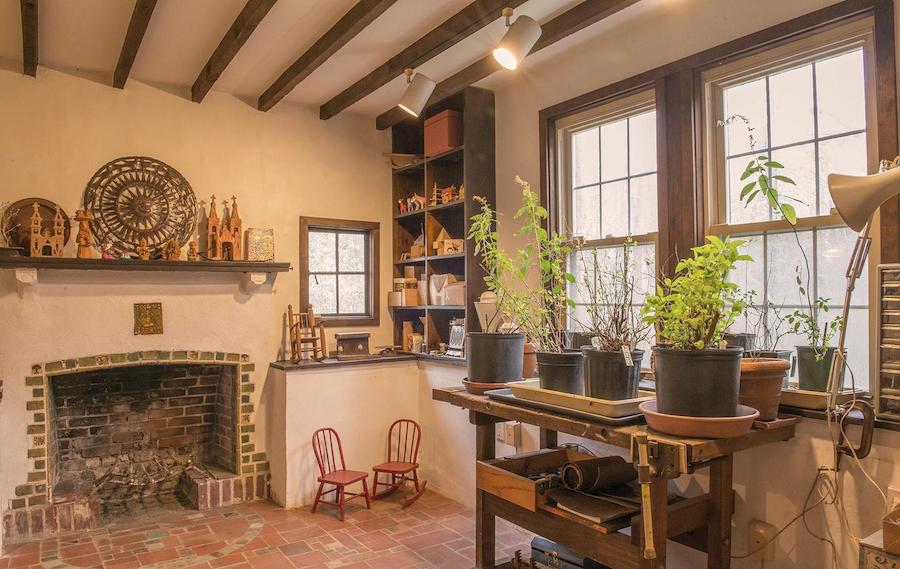 A garden room in the basement also features tiles — Mercer tiles, to be specific — and the other wood-burning fireplace in this house. Its southerly windows face a patio and koi pond right on the edge of the hill. The door leading to the patio from the basement is currently blocked by more plants; the owners of this house for sale clearly have a green thumb. 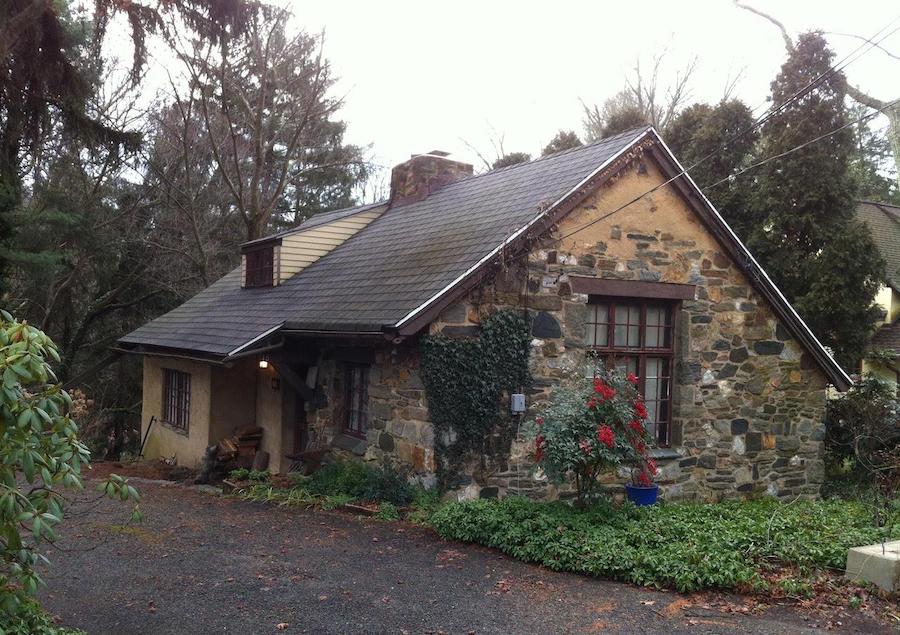 The most dramatic space on this property is found in the forge, which now contains a one-bedroom apartment and studio. 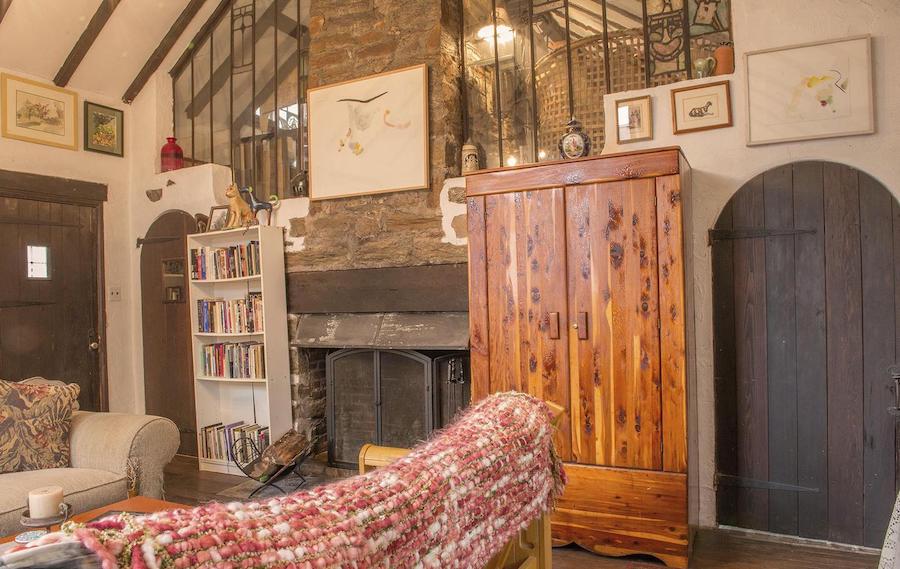 The tall hearth fireplace in its living room served as Walton’s forge. Stained-glass windows frame the fireplace and separate the living room from the upstairs studio. 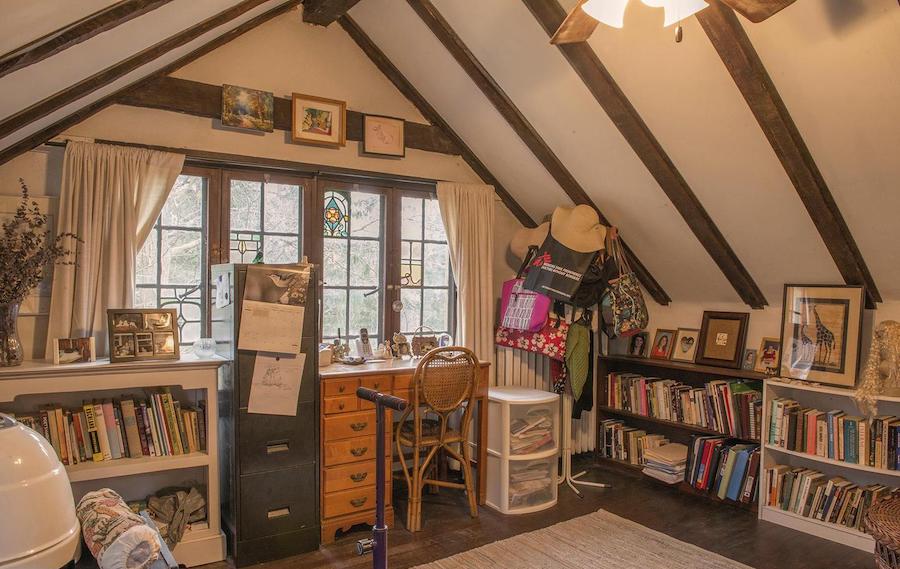 That studio would probably make a better bedroom than the current bedroom, mainly because one has to go through the bedroom on the lower floor in order to reach the compact kitchen. Despite a tight turn at its bottom, you should be able to get a mattress up the stairs to the studio loft.

Both dwellings have been very well maintained but could use a little sprucing up. Please resist the urge to install the usual array of cherry cabinets, granite countertops and stainless-steel appliances in its kitchen, however. Those just wouldn’t fit this house’s personality.

What makes this a rare opportunity, according to BHHS Fox & Roach agent J. Scott Laughlin, is this: Most houses for sale in Rose Valley change hands privately. This is one of the first open-market sales in the borough in quite some time. That’s another reason why you should make your move if you find living in Rose Valley appealing: after this, you may have to find someone who knows someone in order to buy into the community. And keep in mind that when you buy in Rose Valley, you’re buying into a unique community still as well; the residents carry on the spirit of those artists and craftspeople.

OTHER STUFF: What had been planned as a detached two-car garage on this property serves as an outdoor dining arbor instead. Buy this house for sale and you will have Laughlin, who moved to Rose Valley a few years ago, as a neighbor not that far away.