The Trends that Will Shape Philly Real Estate in 2020

To sum up: you will buy a house in Cobbs Creek, fix it up, and rent it out to Gen-Z tenants working on a biomedical startup. Plus some other things to watch out for. 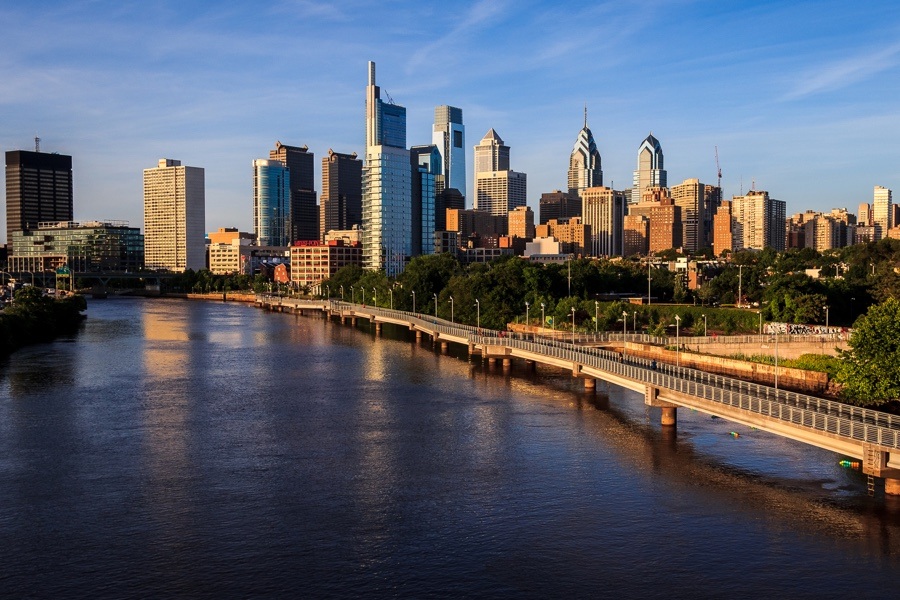 Things just keep getting better in Philadelphia these days, and it looks like the good times will continue to roll in 2020. But that doesn’t mean there are no problems. | Photo: Alejandro Sanchez Fuentes via Getty Images

Now that we’ve disposed of 2019, let’s take a look ahead at 2020. Where will Philadelphia and the region stand twelve months hence?

From this vantage point, the answer looks like: In an even better position than it is now on most fronts, but with that strength will come some familiar challenges. Maintaining both a solid pace of new housing production and affordability will be the biggest ones. And we could even, maybe, just possibly, see the end of Philadelphia’s longstanding status as a city of homeowners.

Let’s look at the trends that will shape the real estate market in 2020 in detail.

While you may not have been looking, Philadelphia has slowly but steadily working its way into the ranks of the world’s economic powerhouses, largely on the strength of its biomedical sector.

Last year, gene and cell therapy companies in Philadelphia attracted a record $514 million in venture capital funding, and the region now ranks third behind only Boston and New York in the total volume of National Institutes of Health research funding.

Most of this money flows into three areas: University City, the Navy Yard and the Route 202 corridor from King of Prussia and Valley Forge to Malvern. Those inflows into University City will accelerate its emergence as Philadelphia’s “second downtown” and also propel the wave of redevelopment that is now washing over 52nd Street further west. That Cobbs Creek rehab featured here Dec. 23rd will get more company as that West Philly neighborhood moves into the “next hot neighborhood” ranks. 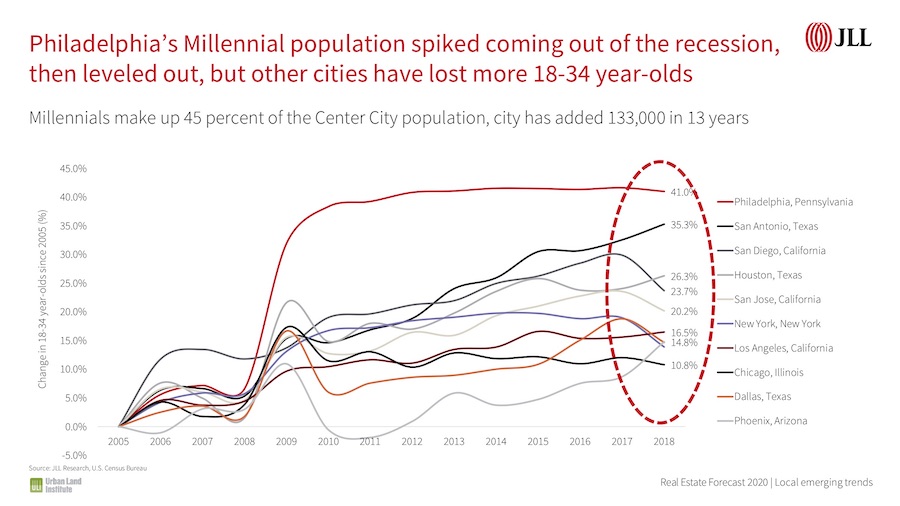 Philly’s Millennial population rose by 41 percent in the decade from 2008 to 2018, almost all of it in the first two years. And almost all of them have remained in the city. | Charts: JLL Philadelphia for ULI Philadelphia

Peak Millennial has passed, but the city still appeals to the young

The Millennial generation that gave this old city new energy is now entering the home-buying years, and what they do will also change the shape of housing in the city, a subject I’ll address in more detail below. But what may be noteworthy is that Philadelphia has managed to hold onto just about all of the Millennials who flocked here during the last decade while most of its peers have seen some of them flee.

As with Millennials, so with Generation Z? It’s too early to say for sure, but it seems likely that this next generation will also like the attributes that turned Philadelphia into a Millennial magnet. 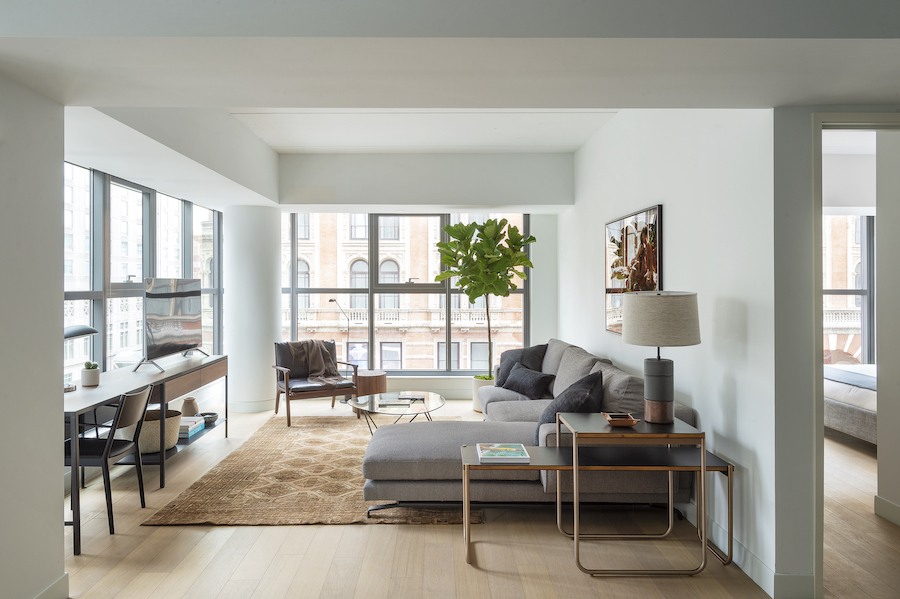 A city of renters?

Unfortunately (or fortunately, depending on what sector of the real estate industry you work in), those Millennials are entering their homebuying years with a millstone called student loan debt hanging around their necks.

That debt burden, the changing nature of work, and a more footloose workforce are all fueling continued growth in multifamily rental development hereabouts. Apartments continue to be snapped up as fast as developers build them, and apartment occupancy in Philadelphia stands at a cyclical high of more than 93 percent. More mobile affluent Gen-Xers and even retiring Boomers also help fuel the rental fire.

New rental options like “co-living” and furnished flexible-stay residences, from AKA at the high end of the market to more moderately priced options like Sonder, also widen the choices available to would-be renters, many of whom find not having to deal with maintenance issues or buying furniture worth the additional money they will pay in rent compared to a mortgage for a comparable property.

Because of these changes, the rate of homeownership has been falling almost steadily in Philadelphia during the 2010s. It did tick upward a bit in 2018, from 55.3 to 55.5 percent, but that still represents a significant drop from the 60-percent-plus rates of past decades. And as the production of rental housing right now outpaces that of housing for sale, we could see the day when this storied “city of homes” becomes a city of renters within the next two to three years, joining the ranks of superstar cities like New York, San Francisco and Boston.

Affordability will remain an issue

That transition, the continued undersupply of housing for sale, and the city’s stubbornly high poverty rate will all combine to keep housing affordability front and center on policymakers’ radar screens. Already, there’s talk of creating ways to keep subsidized affordable housing units affordable once their subsidies run their course, as many projects built in the 2000s will do this coming decade.

The growing ranks of renters will also likely spur more calls for rent control, something Philadelphia has never had. It seems to me that the lack of rent regulation has had something to do with the city’s status as the most affordable place to rent an apartment in the Northeast, and were the city to adopt it, we would soon see a falloff in new rental construction and higher rents for what does get built. But the presence of a larger progressive bloc on the incoming City Council means we will likely be discussing it — if not this year, then soon. 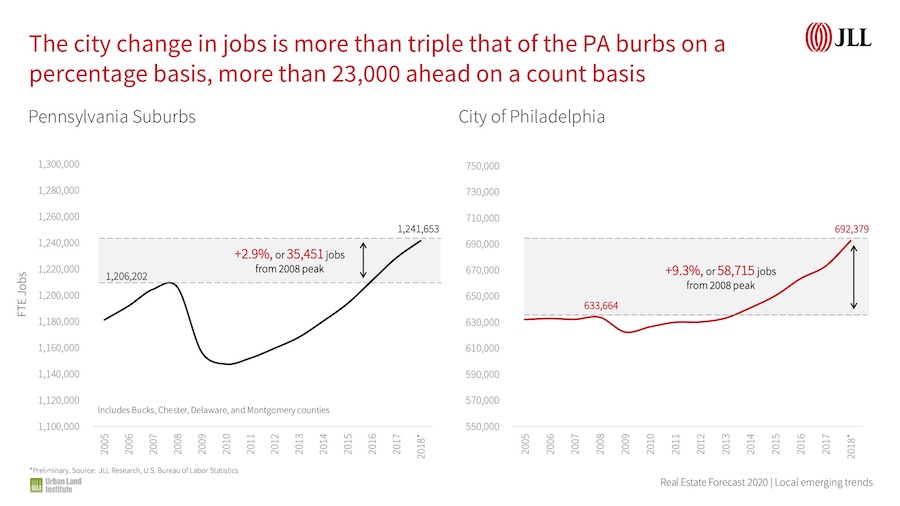 The city didn’t lose as many jobs as its suburbs did in the Great Recession, and it’s added more jobs than the suburbs have since then. While suburban employment still outstrips the city number, the city’s resurgence secures its place as the region’s largest job center – and that should be good news for developers.

The fallout from the tax abatement cut

Expect to see a flurry of building permit applications this year as developers contemplating projects move to get them underway in time to qualify for the unaltered 10-year property tax abatement.

But don’t expect to see a significant drop in new construction in the longer run. That’s because the fundamentals remain favorable to building here, especially for out-of-town investors. The head of one such firm recently affirmed that his company plans to continue building here after 2021 because the returns remain favorable compared to other markets it operates in, and while the reduced abatement may make financing projects a little harder, that won’t be a serious obstacle to getting those projects off the drawing board.

And, of course, rehabbers like the people who made over that house in Cobbs Creek will continue swinging hammers as before, for the abatement remains intact for both residential renovation and commercial construction projects. That last fact should help the city continue to add jobs at a much faster pace than in the recent past. That, in turn, should furnish more buyers and renters of housing hereabouts, reinforcing that out-of-town developer’s outlook.

Much of what appears here is based on research performed by Lauren Gilchrist, senior vice president and senior director of research at JLL Philadelphia, and presented at the annual Urban Land Institute Philadelphia “Real Estate Forecast” seminar held at the Westin Philadelphia Hotel Nov. 19th. The graphs that appear in this article come from the presentation.