On the Market: Live/Work/Play Farm Compound Near Collegeville

With online shopping and grocery delivery, you may never have to leave home if you live here, for this place has absolutely everything else you need. 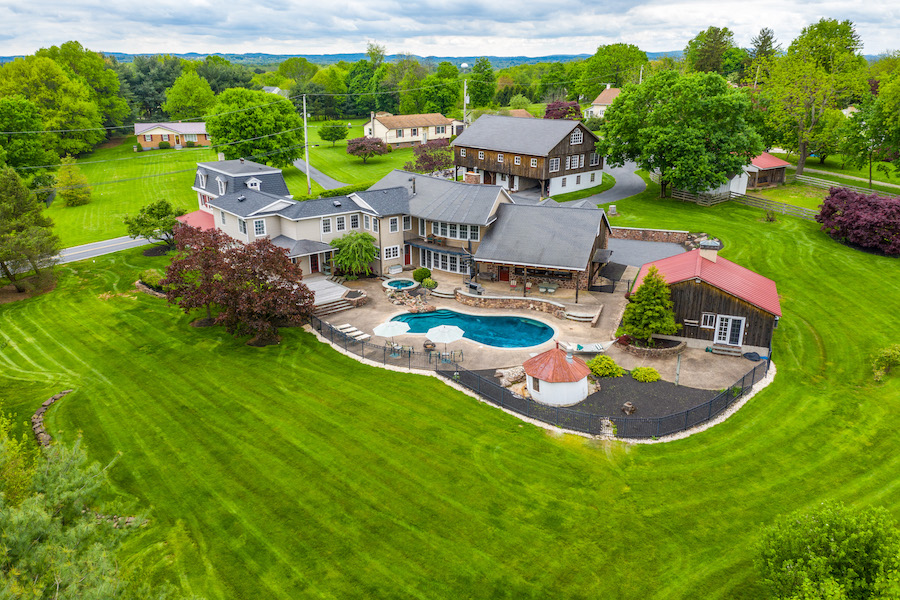 Some of you may have heard of a guy named Chuck Marohn. He’s a self-described “recovering highway engineer” from Brainerd, Minn., who runs an organization called Strong Towns that offers a thoroughgoing critique of the way we have built our suburbs since World War II.

One of his chief bits of advice for planners and others who want to build places that last is: Don’t plan everything all at once to the jot and tittle. Do things incrementally, in pieces you can manage. And while you’re at it, look at the way we used to build places. They were built to last and can sustain themselves.

If those are the building blocks of a Strong Town, then what you are looking at here is a Strong House for Sale.

If it’s not clear from looking at it in the photo above, this farm compound grew incrementally, as owner Joe Seufer could get around to expanding it. And he built it to last, using traditional wood joinery and Amish craftsmanship on the one hand and steel beams and modern techniques on the other.

The story of this house actually begins with the mansard-roofed house at the left in the photo above. The listing says the house was built in 1700, and the original portion may be that old. It was built by a man named Jesse Searley. Sometime in the 19th century, before 1850, the house got added onto. 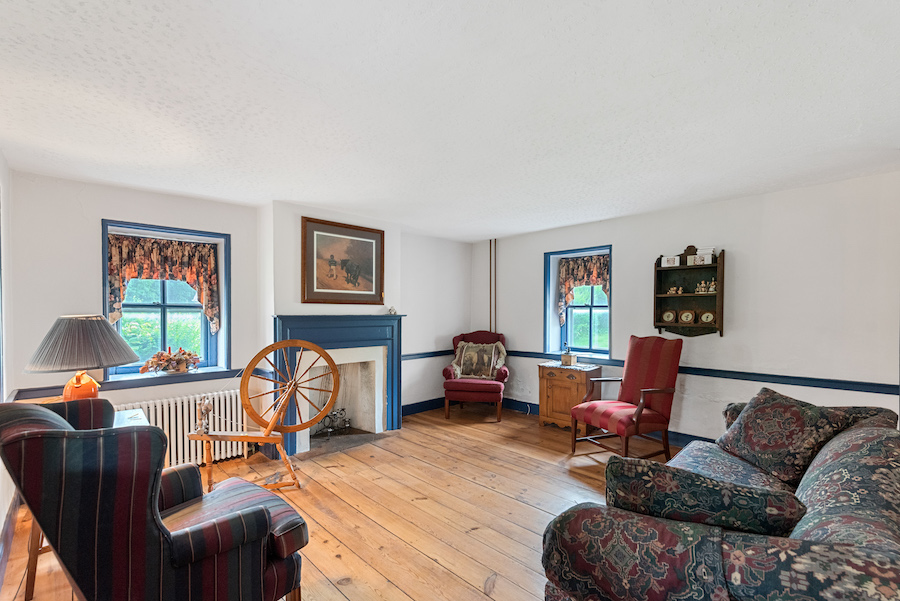 The original house has a living and dining room on the first floor, two bedrooms and a bath on the second, and a full-floor bedroom and bath that served as a master suite when Seufer and his wife bought the house in 1987 on the third. 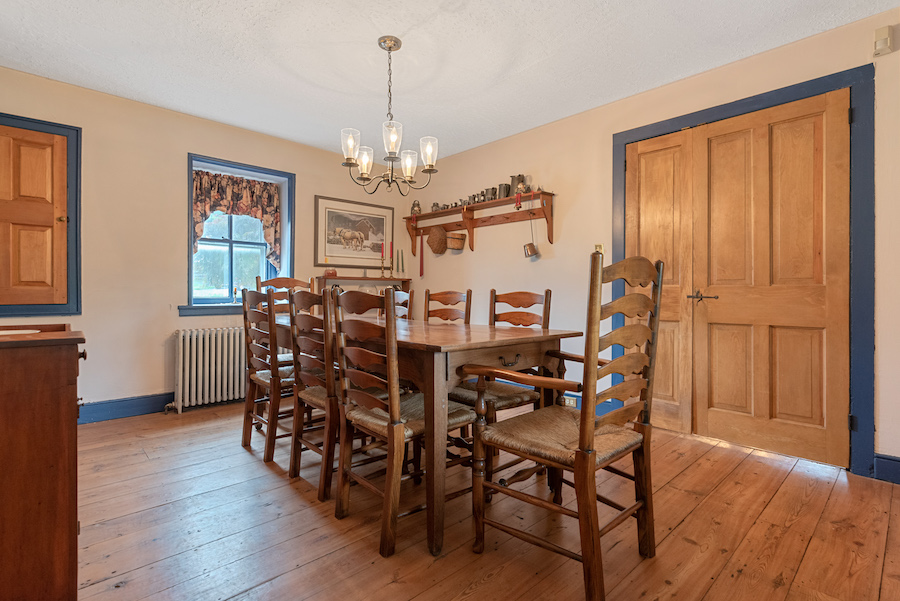 The dining room was the original house’s kitchen. Today a large doorway leading to today’s kitchen sits about where the hearth fireplace sat. Here the house Jesse Searley built ends and the one Seufer built — and rebuilt — begins.

The first change to the main house came when Seufer demolished an addition the Swedish couple who owned it before him built in the early 1980s and built the section that contains today’s foyer and the kitchen in 1998. 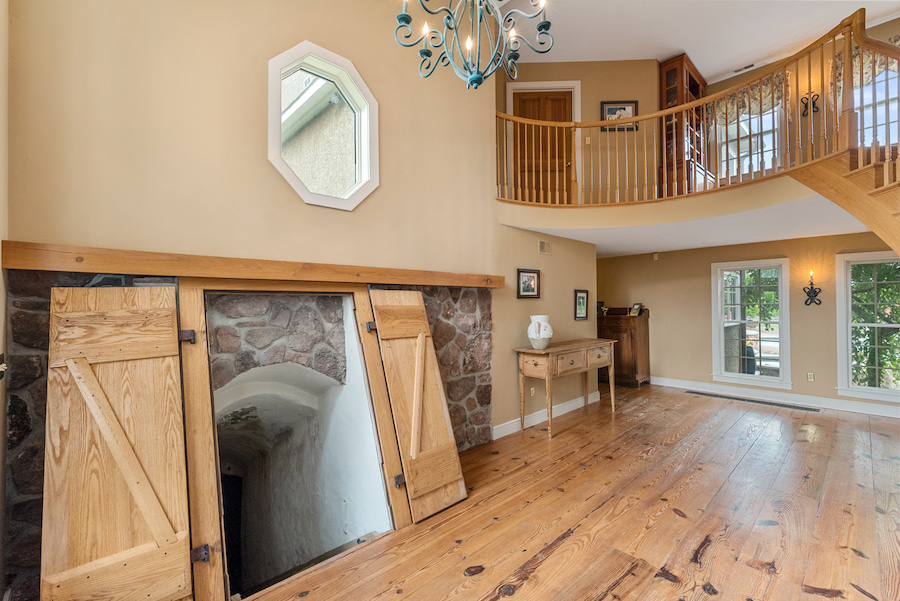 The foyer resembles the one found at the original clubhouse of the Commonwealth National golf course in Willow Grove, itself a former farmhouse. The wooden cellar doors cover stairs that lead to a root cellar; with proper temperature and humidity controls, this could become a great wine cellar. This cellar is the only basement in the house. 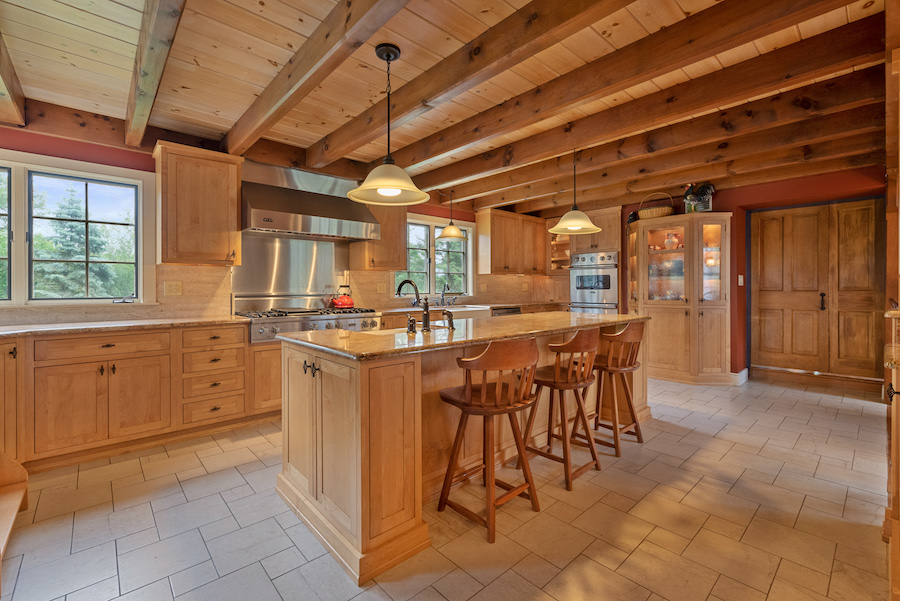 Beyond the foyer lies the kitchen, the breakfast room and a small bar. Amish barn-builders installed the mortise-and-tendon kitchen ceiling, and Seufer added a second subfloor above it to serve as a fire barrier for the children’s bedroom directly above. 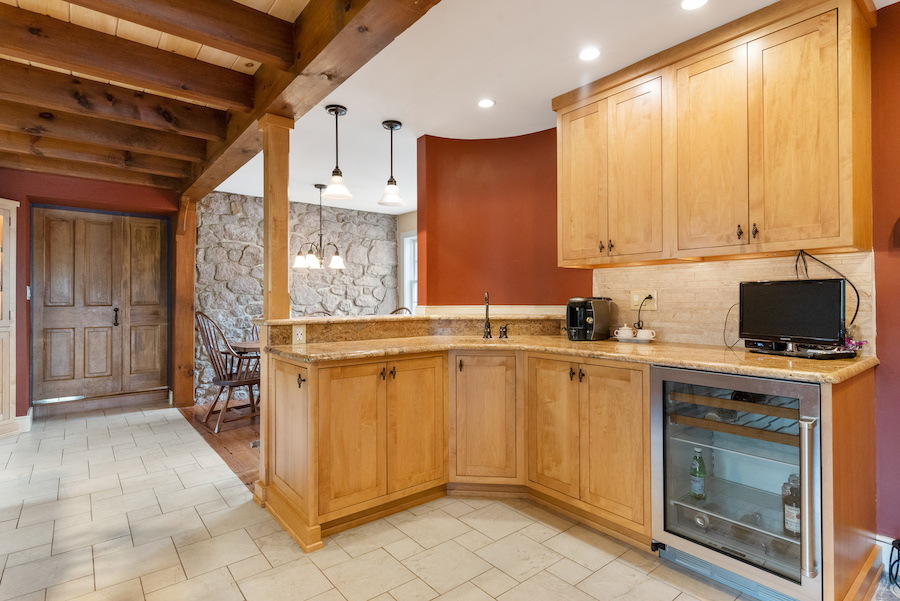 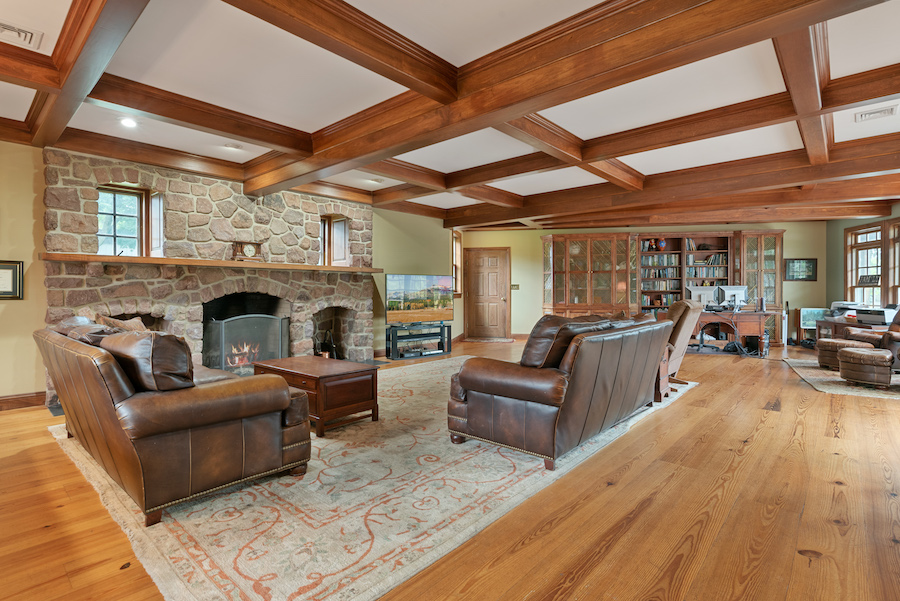 Underneath those steel beams we find a spacious great room. Its stone fireplace was also built by Amish craftsmen; Seufer explained that he wanted a flue that would never clog.

The great room contains a pool table, a bar, a sitting area and a home office and library. It also has a humidor; Seufer used to smoke cigars, and the great room — “This was to have been my man-cave,” he says — has three separate zoned smoke-removal systems. 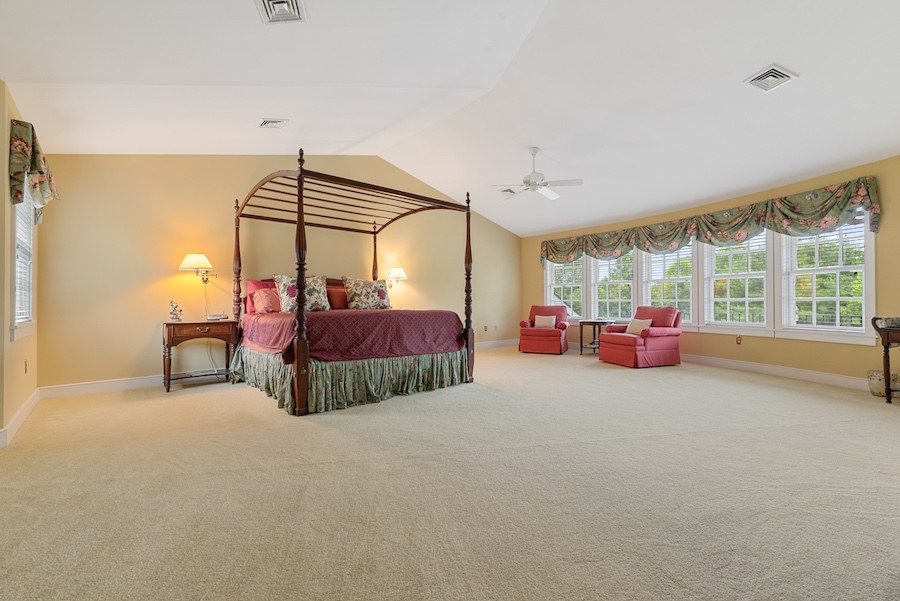 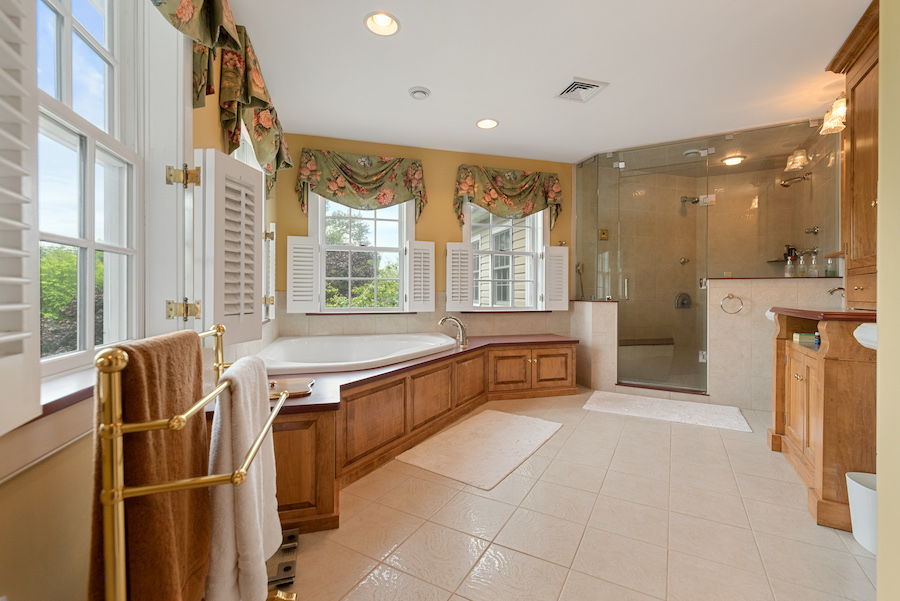 The master bedroom is as big as all outdoors, and thanks to its construction, one doesn’t experience shaking, settling or vibrations. Its two walk-in closets are each large enough that they could serve as bedrooms themselves. 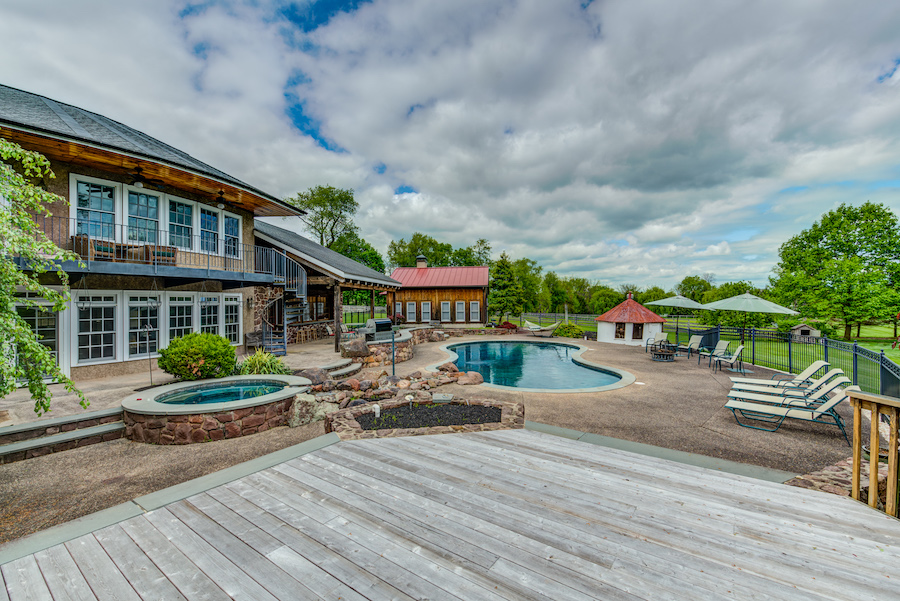 Its balcony looks out over an outdoor pleasure palace. It includes a deck — again, with a reinforced subfloor that will support a heavy grill — an in-ground pool, a hot tub, and a patio with radiant heat in its concrete pavement. (The newer part of the house also has radiant heat.)

Attached to the far end of the great room is a two-story, two-car garage built by the Amish in 2001. It has a gym on its upper-level balcony and a small putting green next to the large windows on the pool side of the first floor. Those windows have shelves at their base that can serve as a buffet for an outdoor dinner party; there’s bar seating just beyond them, underneath the overhang.

A former chicken coop beyond the garage was transformed into a pool house and guest cottage. The cottage includes a bedroom, a fireplace, a kitchenette and a laundry room. 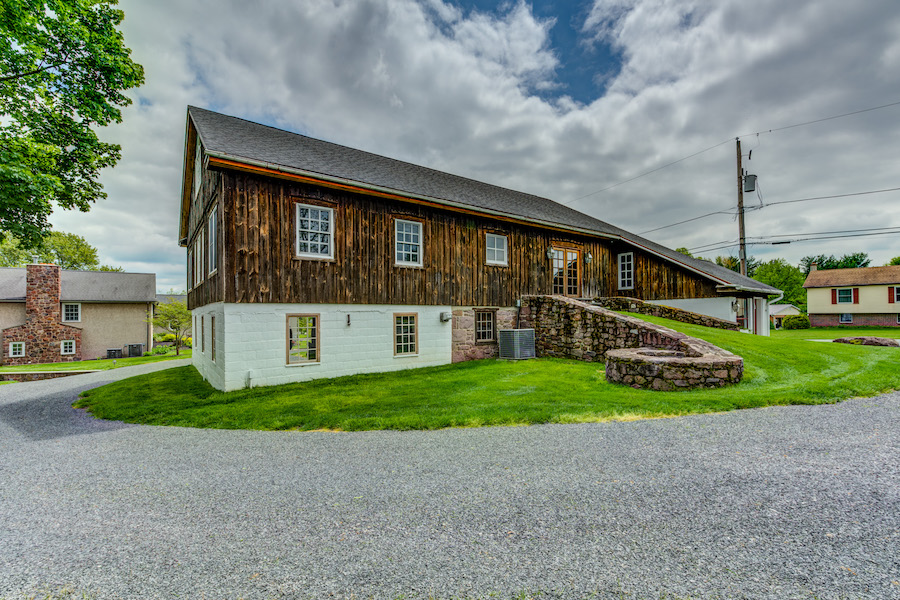 Seufer bought this property to serve as both his home and as the office for the health-insurance company he ran. The Amish-built bank barn on the property was erected to house that office in 1990. 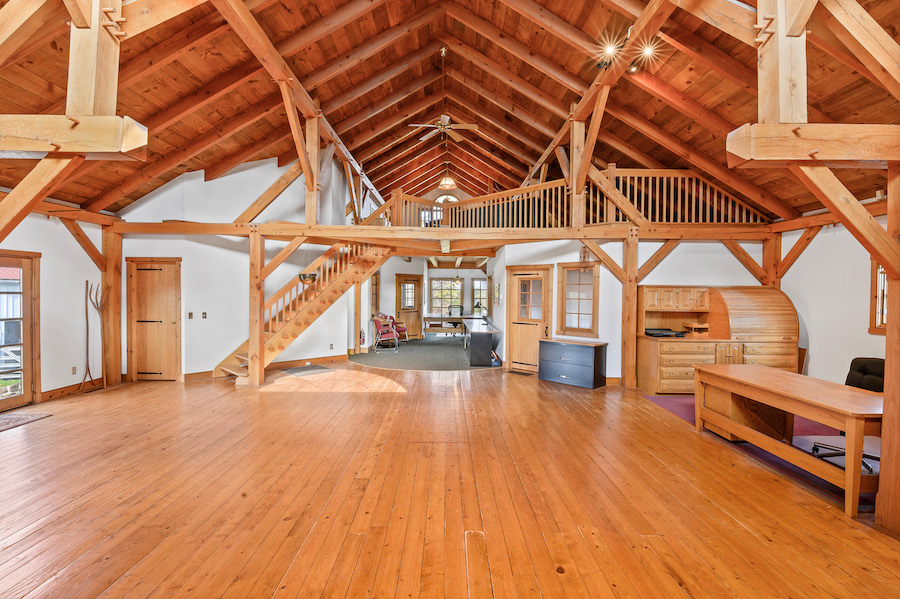 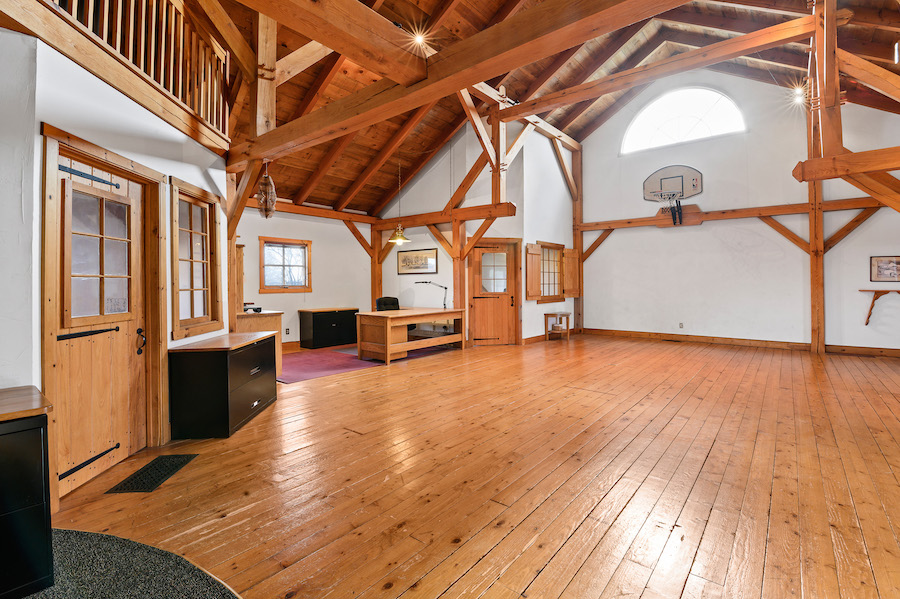 That makes it a Millennial office space before the Millennials entered the workforce in droves. What gives it that distinction? Well, there’s that half-court basketball floor for starters. Beneath the office floor are two covered parking spaces and a workshop.

Seufer had a very good architect designing this complex: Himself. “I always wanted to be an architect,” he says. “My dad was an engineer.” His high-school guidance counselor, however, steered him into a business major. But he never lost the bug completely. He did hire a professional architect to prepare the drawings for submission to Upper Providence Township officials.

This house for sale is also equipped for equestrian activities: It has a second barn with three boarding stalls and two birthing stalls, a hayloft and three separate pastures.

You’d be hard-pressed to find a better live/work/play triple-threat than this. And given all its amenities and the quality of its construction, its price is a steal.

OTHER STUFF: Not looking to make your home your office? That bank barn upper floor could make a great indoor party space to go with the outdoor one.