Apartment Profile: The Hub at 31 Brewerytown 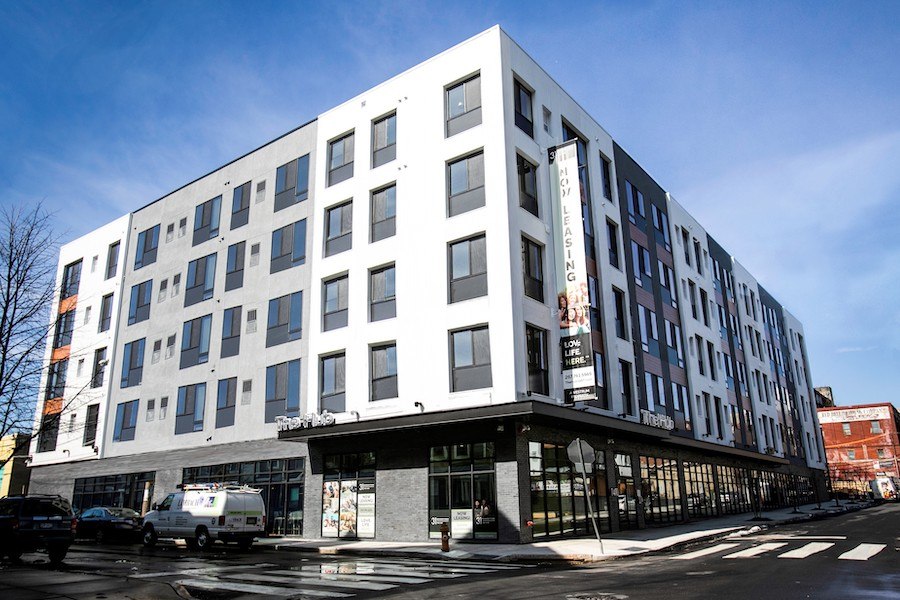 The exterior of Building 1, the first of The Hub at 31 Brewerytown’s three buildings to be completed. | Photos courtesy Westrum Development Corporation

With all the new construction and renewal taking place in Brewerytown these days, it might be hard for some to remember that someone had to put that first shovel in the ground back when nobody wanted to build here.

That someone was John Westrum, founder, chairman and CEO of the development company bearing his name. And that first shovel dug the foundation for Brewerytown Square, the 144-unit townhouse development Westrum built in 2004-06.

That project turned out very well for Westrum — so much so that after the real estate market recovered from the bursting of the bubble in 2008, the company returned to the neighborhood big-time. 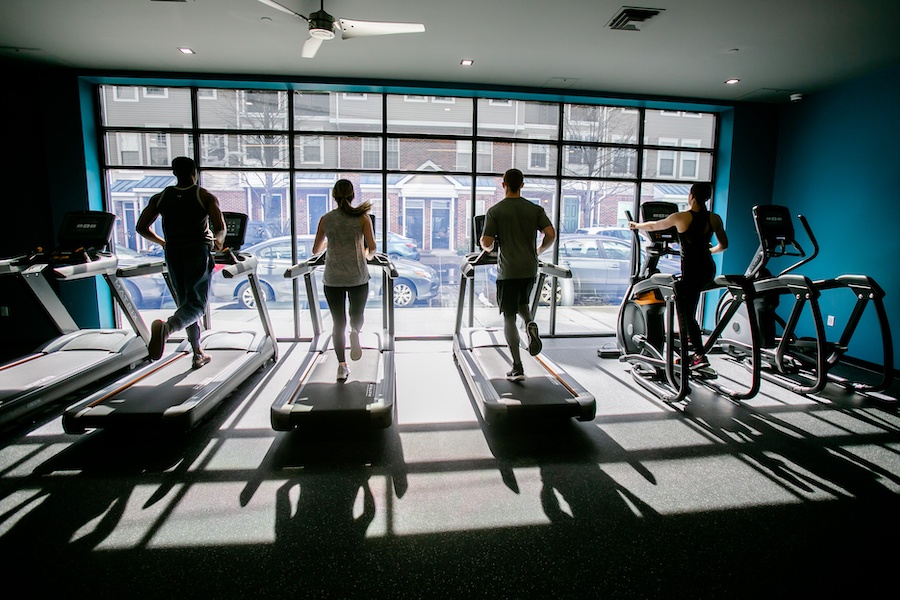 “The whole 31st Street corridor from Girard to Oxford, we bought everything you see along it,” he says. “We were instrumental in getting the Aldi [originally a Bottom Dollar Food] and the liquor store put in — that was property we owned.”

Westrum even bought the former Red Bell (nee F.A. Poth) brewery but later sold it because the company preferred to focus on new construction. (Local developer MM Partners picked up that property and is converting it to apartments now.)

But when it came back, Westrum shifted its construction focus from houses for sale to apartments for rent. Its three projects along 31st Street — The Pointe, The Flats and The Hub — together comprise 31 Brewerytown, a 509-unit combination offering something for just about everyone.

The Hub is the newest of the three; in fact, it’s not completely finished yet — the third of its three buildings is still under construction. But it’s the largest and most amenity-rich of the three complexes and the only one conceived from the start as a live/work/play development. 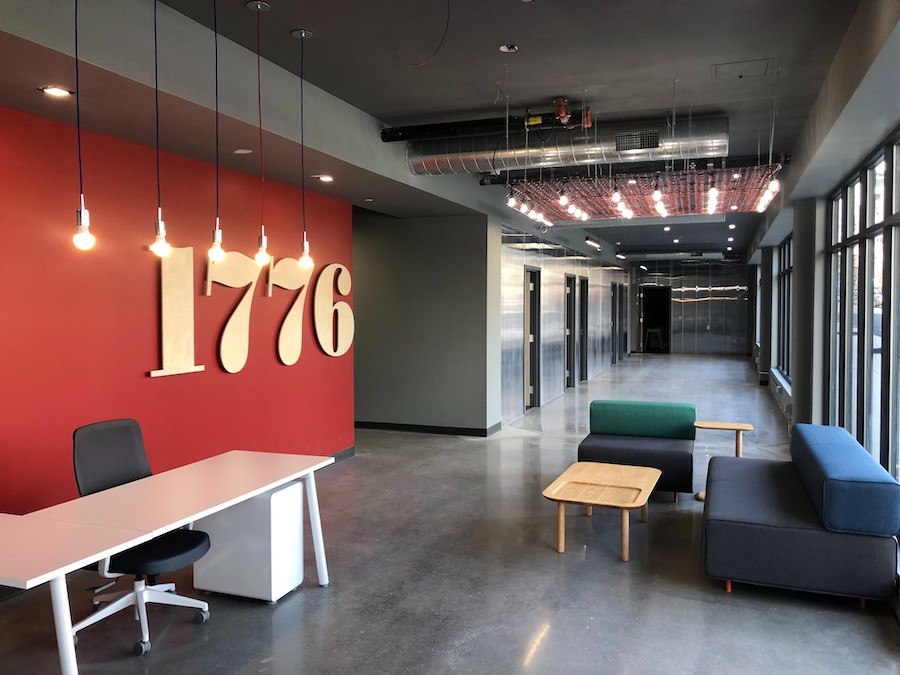 The lobby of the 1776 co-working space

The “work” part is provided by 1776, which has a co-working facility on Building 1’s street floor. Neighborhood and building residents alike can become members here; 31 Brewerytown residents get a 10 percent break on the membership fee. 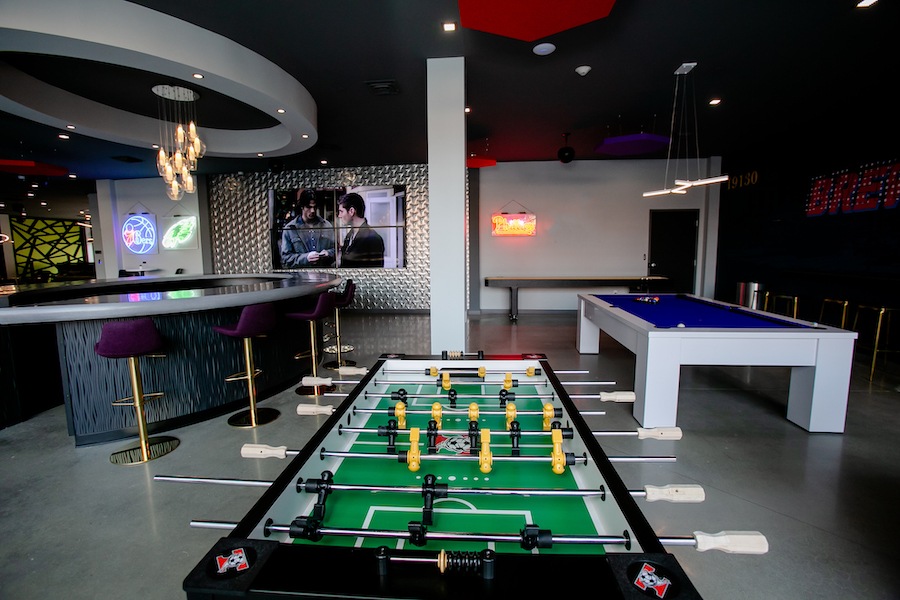 The bar and game room; the TV lounge (below) is visible at left rear 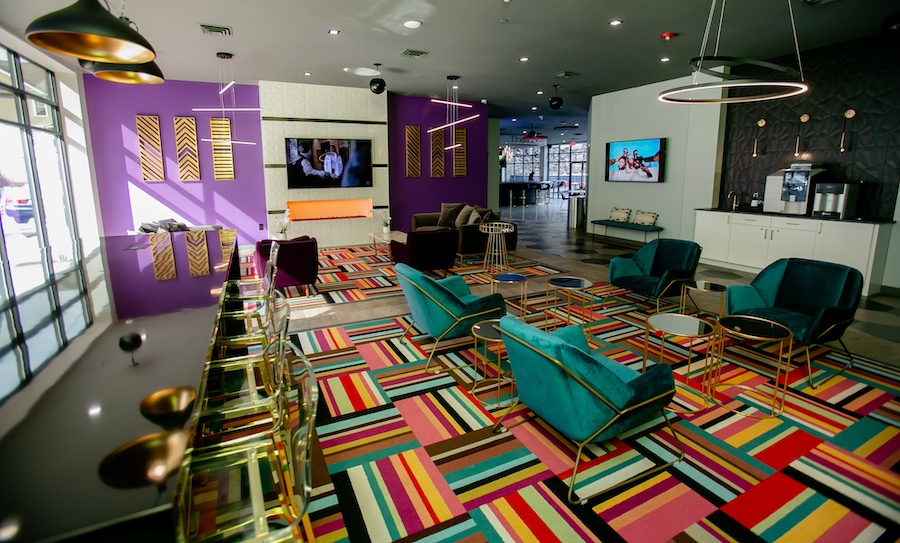 The TV lounge and coffee bar; the bar and game room are visible at center rear

Like its suburban sibling in Norristown, Luxor, The Hub offers loads of stylish, luxurious amenity space: 20,000 square feet in all, indoors and out. The bar and club room, game room, indoor TV lounges, fitness center, outdoor lounges and fire pit, and pool and cabana all display a mix of glitz and funkiness that makes them more colorful than what one finds at similar complexes elsewhere. 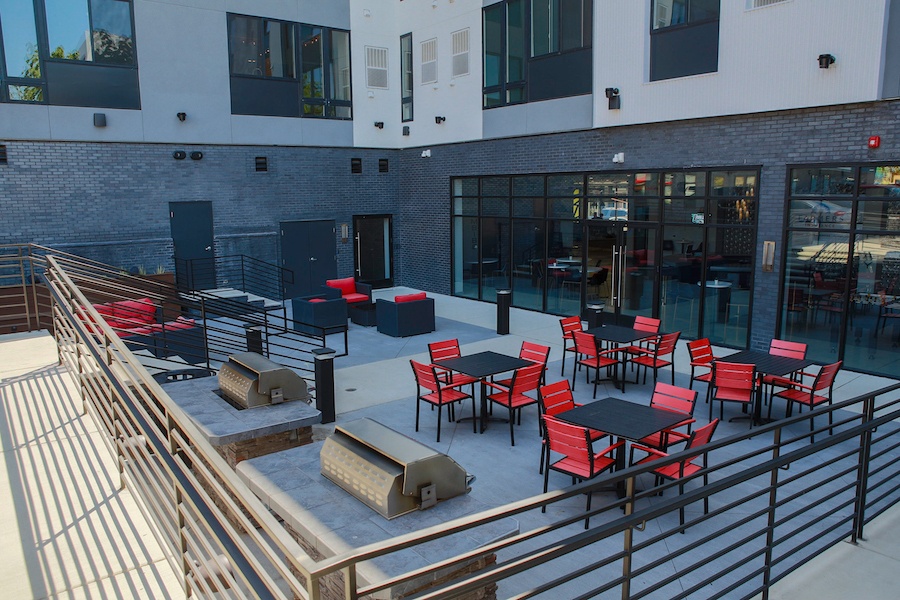 The outdoor dining area is located just beyond the TV lounge 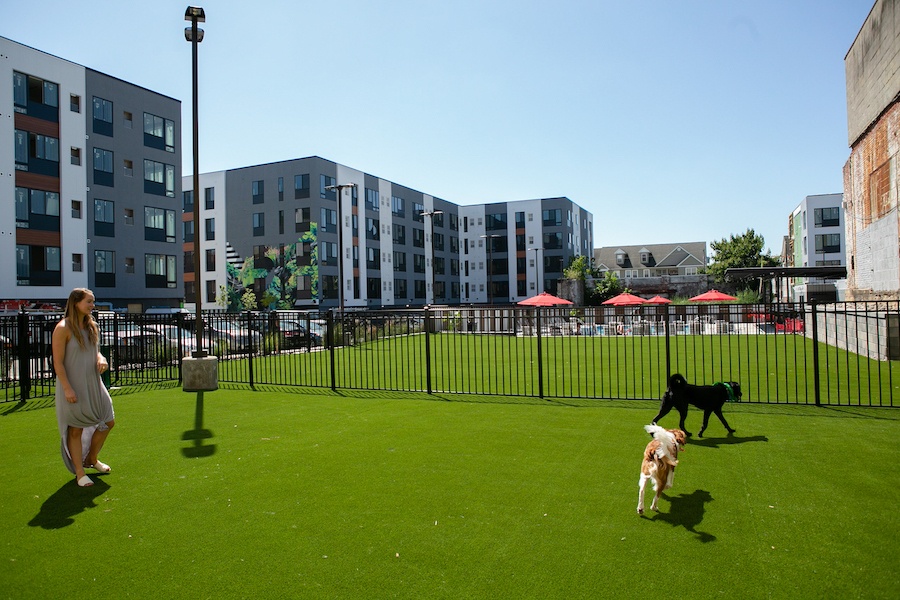 The pet-friendly development has two dog parks, one for small breeds and one for large dogs

The apartments themselves are spiffy as well. What they aren’t is pricey: rents here run below what similarly outfitted new apartments elsewhere cost.

The pool and poolside bar. Building 3 is under construction at the rear of the photo

There is one other prized amenity included with every apartment at The Hub: A parking space. Because of this, Westrum says, The Hub “looks somewhat suburbanesque, but that was because of our arrangement with Councilmember Darrell Clarke, who wanted a 1:1 parking ratio there.” 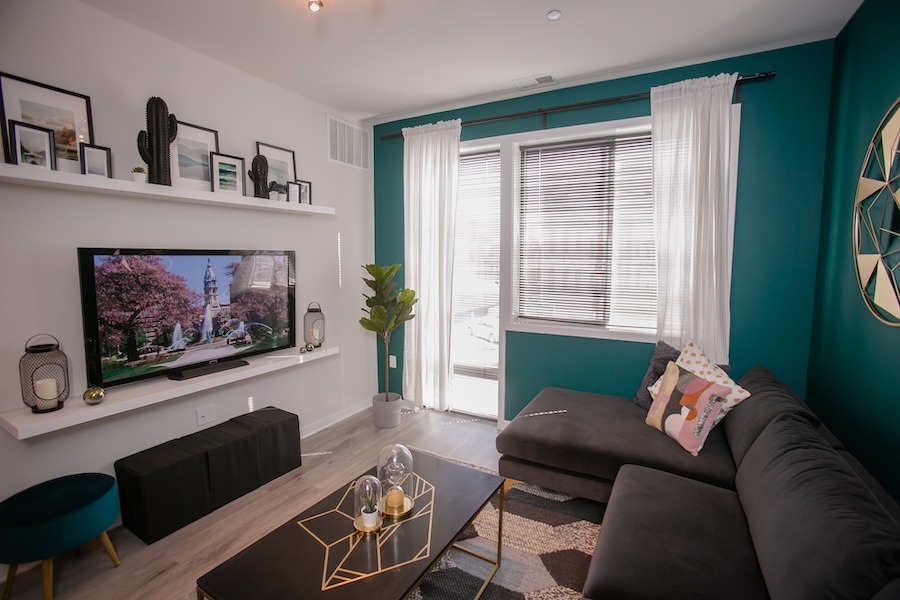 The living room in a model apartment 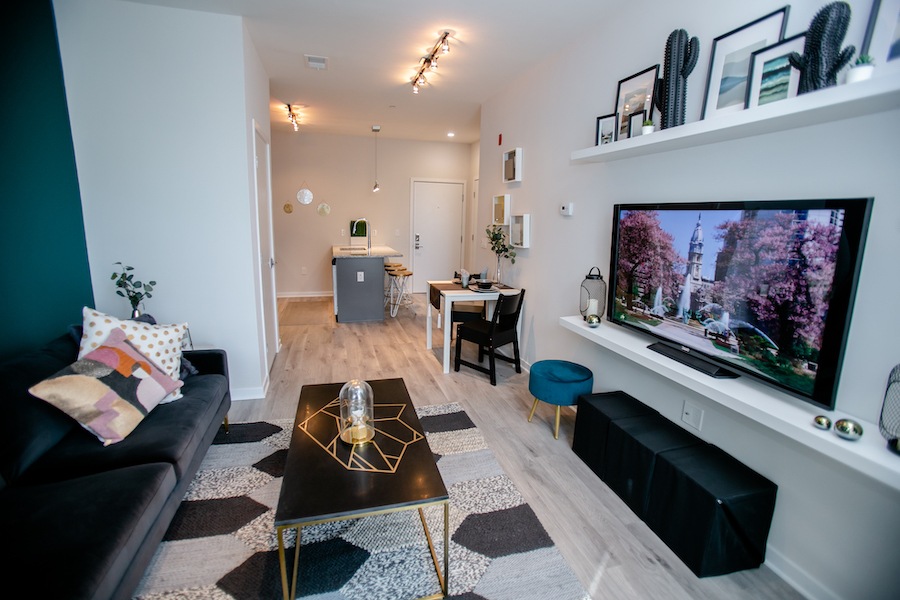 The model apartment living and dining rooms, with the kitchen at the rear 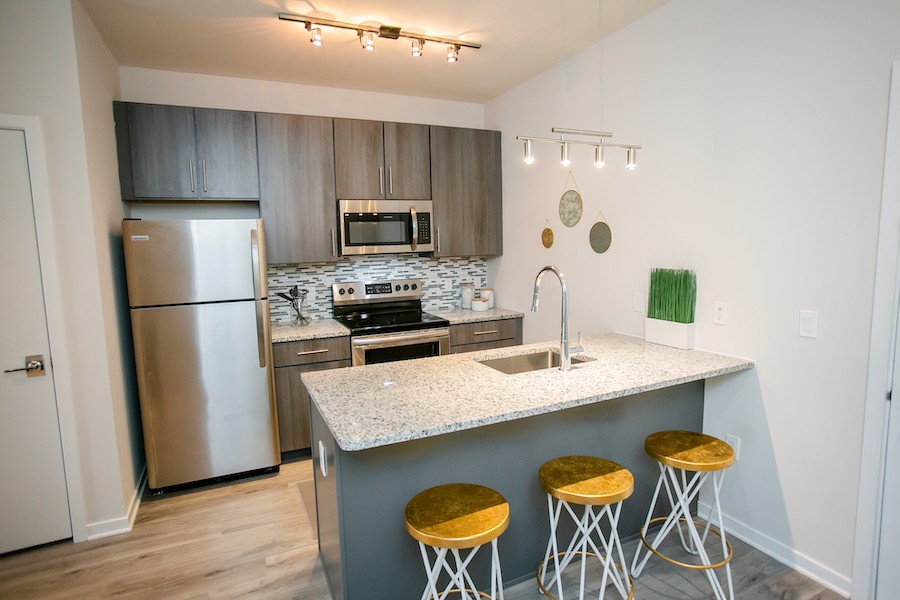 While Westrum says he “might have done this differently” were it not for that requirement, it’s turned out to be a major selling point for potential tenants. “People with cars come to our community,” he continues. “And you see some pretty high-end vehicles in the lot. A secure parking space is something you don’t find in a lot of new construction in the city.”

The parking is also valuable, he adds, because of all the new housing his firm and others have built: “If you went to Brewerytown 10 years ago, you could park everywhere. Now you can’t park anywhere.” 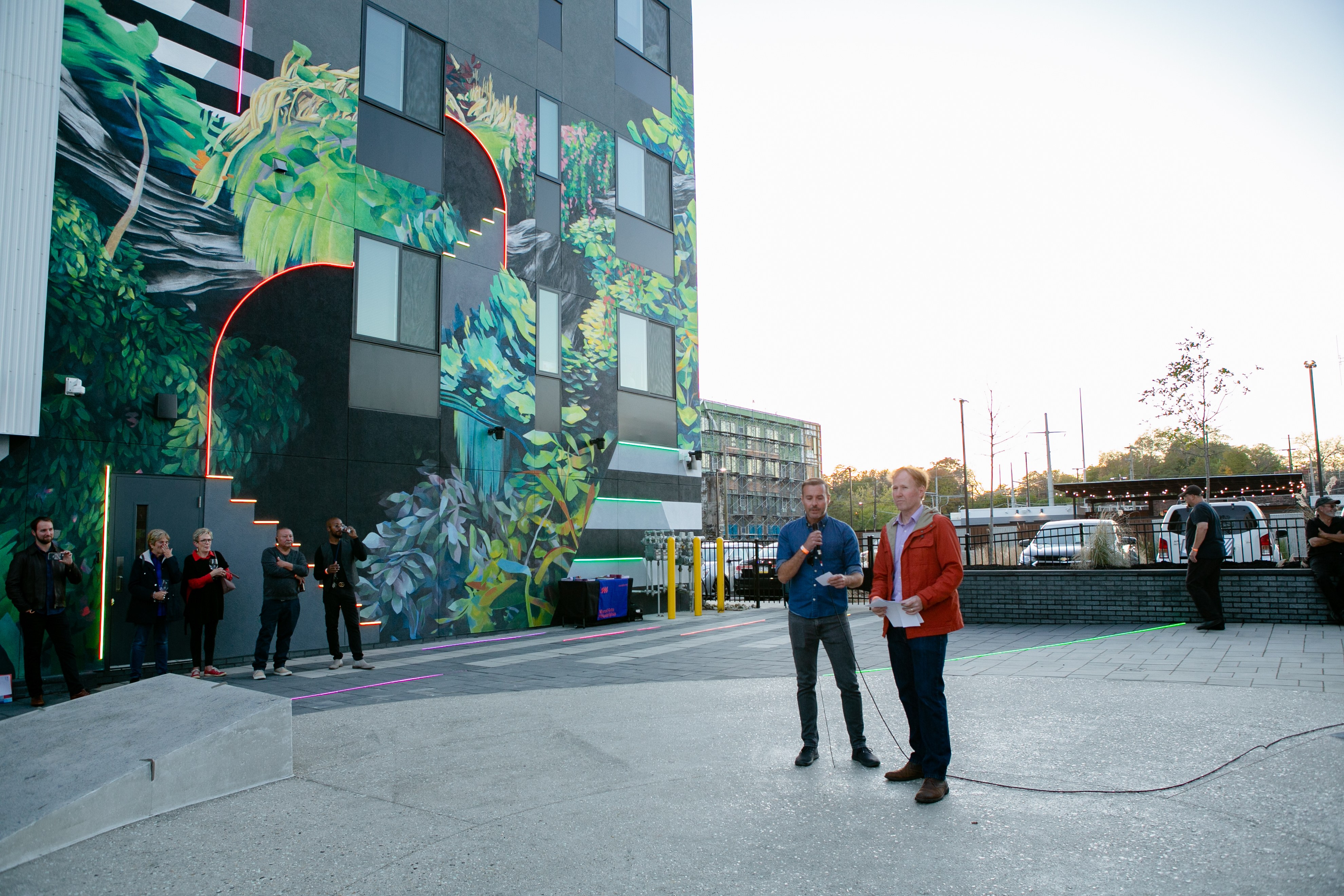 There’s also an amenity for the neighbors as well: The Plaza @ 31 Brewerytown, located between Buildings 1 and 2. This pocket park, which opened Oct. 21st, features a dynamic lit mural and space for gatherings and events. Westrum plans to program the park with activities and events, including farmers’ markets, concerts, flea markets and community festivals.

The end result of all this is a livelier Brewerytown for residents to enjoy.”What Brewerytown needed was people,” says Westrum. “It needed new residents.”

And The Hub, along with Westrum’s earlier projects and the new houses and apartments the other developers who have followed in its wake have created, has provided those in spades.

The Hub at 31 Brewerytown by the Numbers

Number of parking spaces: 201, in a secure surface lot and an in-building garage

Other stuff: Tenants at The Pointe, located across 31st Street from this complex, also enjoy access to the amenities at The Hub.