The developer of Norristown's newest Millennial magnet celebrates the rescue of its next-door neighbor and the relief of one of the municipality's biggest headaches. 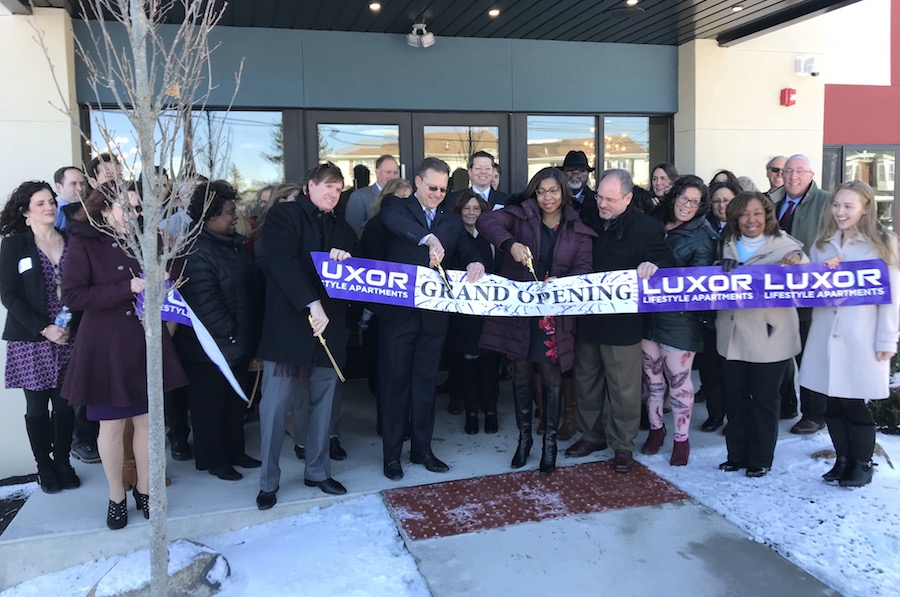 On the one-year anniversary of the opening of the original Luxor apartments, Friday, Jan. 18th, Westrum Development Corporation officially celebrated the completion of its rescue operation on the building next to it with a ceremonial ribbon-cutting.

Westrum found the building when he bought the lot next door to it for the original Luxor project in 2012. At that time, it was a white elephant and something of an albatross around the neck of the Municipality of Norristown.

“It was a first-time developer who went bankrupt and the project failed,” explained Municipal Administrator Cranton Jones. The builder had constructed what was to have been a residential condominium in 2006 only to file for bankruptcy as construction wrapped up on the building.

“It was actually finished and occupied,” Jones said. “But there were a few problems, none structural. But the developer couldn’t follow through and finish the deal, so we ended up having to condemn the building.”

The building now known as Luxor II started out in 2005 as a condominium project that its builder, Bruce Fazio, dubbed The Rittenhouse Club. But its construction was plagued by problems from the start. According to a 2014 Norristown Times Herald news report, the problems involved defects in the building’s construction, including missing firestops, inadequate emergency exits and faulty electrical wiring.

A Montgomery County court, faulting the municipality for inadequate inspection of the work, first ordered Norristown to make repairs then condemned the building in 2010, before Jones was appointed administrator by the Municipal Council.

After the condemnation was lifted, the building remained a drain on the municipal treasury. In addition to paying for repairs and picking up the building’s ongoing maintenance tab, Norristown became embroiled in lawsuits concerning the handful of people who owned units in the building; they had to move out when the building was condemned and returned when the condemnation order was lifted in 2012. It was at about that time that Westrum entered the picture.

Westrum had purchased the lot next door that year and had already begun discussions with Norristown officials about the type of development it wanted to build on the site. As work on the original Luxor apartment complex was winding down in 2016, Westrum and Norristown began to discuss what to do with this building.

“I came here in August of 2013,” said Jones, “and this was the first albatross around my neck. My thought was, ‘Let’s find an exit strategy for resolving this issue.’ And John had [built] this project, and it turned out beautifully. And of course the neighboring property impacted his, and he had an interest in that.”

“This building was sort of the bane of existence for Norristown,” Westrum said, and municipal officials welcomed his interest in acquiring it.

It took more than the usual amount of negotiating in order for Westrum to acquire the all-but-abandoned building. “In order to make the deal happen, there had to be an agreement between the county, the municipality and the school district to waive liens that were on the property,” Jones said.

All involved cleared the legal thicket last year, and Westrum went to work, stripping the building of its original exterior and reconfiguring it to match Luxor inside and out.

The building is a “suburb” of sorts to the main complex. “It’s the quieter, more Zen aspect of our property,” Westrum said.

Luxor II residents have their own lounge in the lobby for relaxation and recharging; it has beverage service, workstations with USB ports, a big-screen TV and a most unusual “fire pit.” They also enjoy the use of all the amenities in the main building: a bar and game room, fitness center, yoga studio, dog park and wash, courtyard with barbecue grills and a waterfall pool situated one level below the building on the side of the hill on which it’s perched.

Interest in the complex has run high, Westrum said. Luxor I is almost totally leased and he expects Luxor II to fill fairly quickly. The photos below show scenes from the ribbon-cutting and some of the amenities residents of both Luxor buildings enjoy. 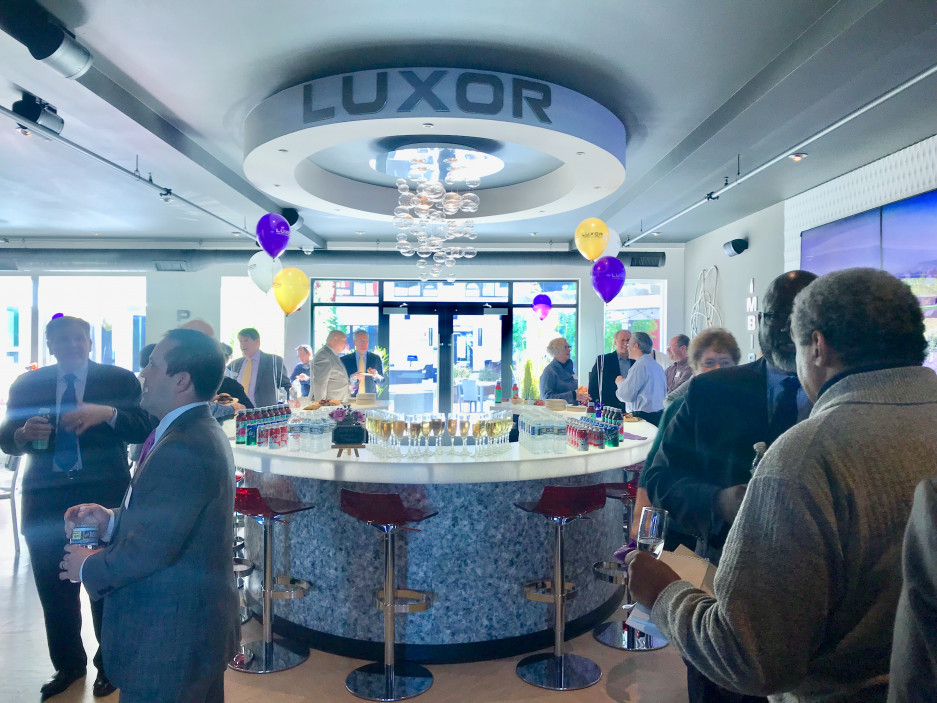 The ceremony and tour began with a reception in Luxor I's bar, lounge and game room. | Photo: Westrum Development Corporation 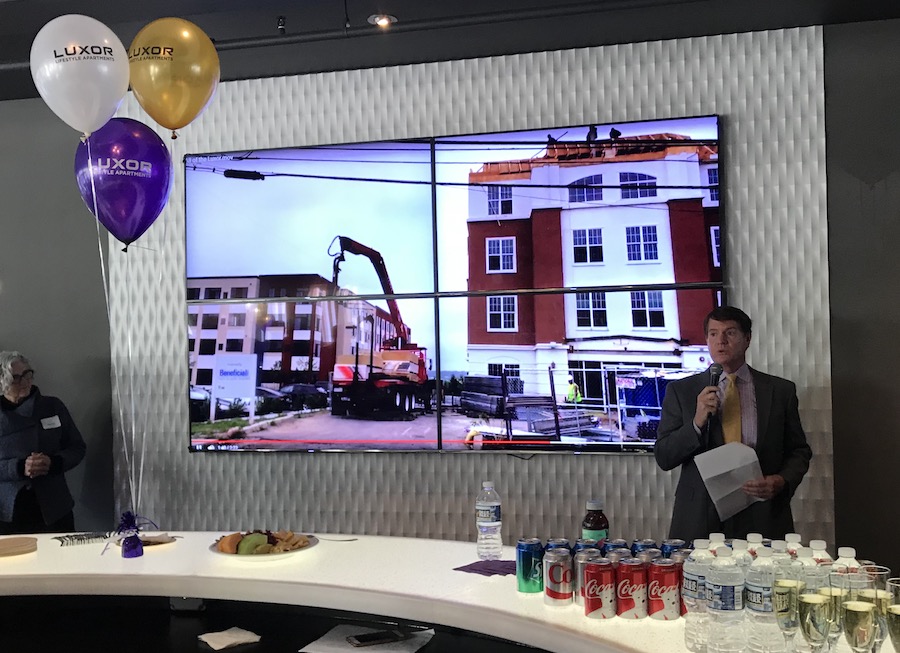 Westrum CEO John Westrum speaks at the reception with a video of the stripping and rebuilding of Luxor II playing behind him. 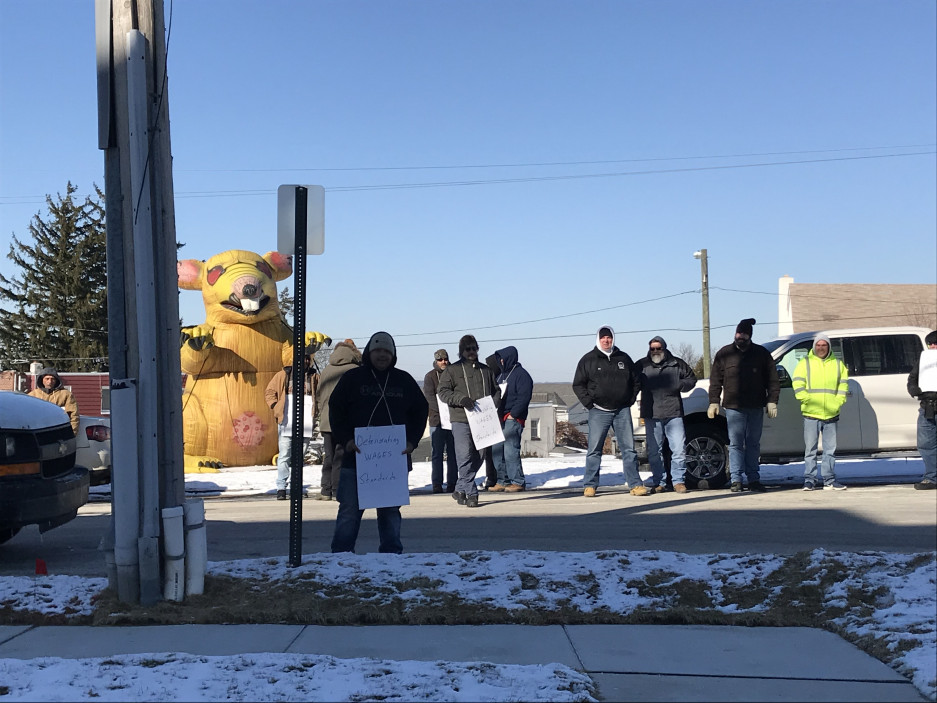 Some uninvited guests - construction union members protesting Westrum's use of nonunion labor on this project - also attended the event. 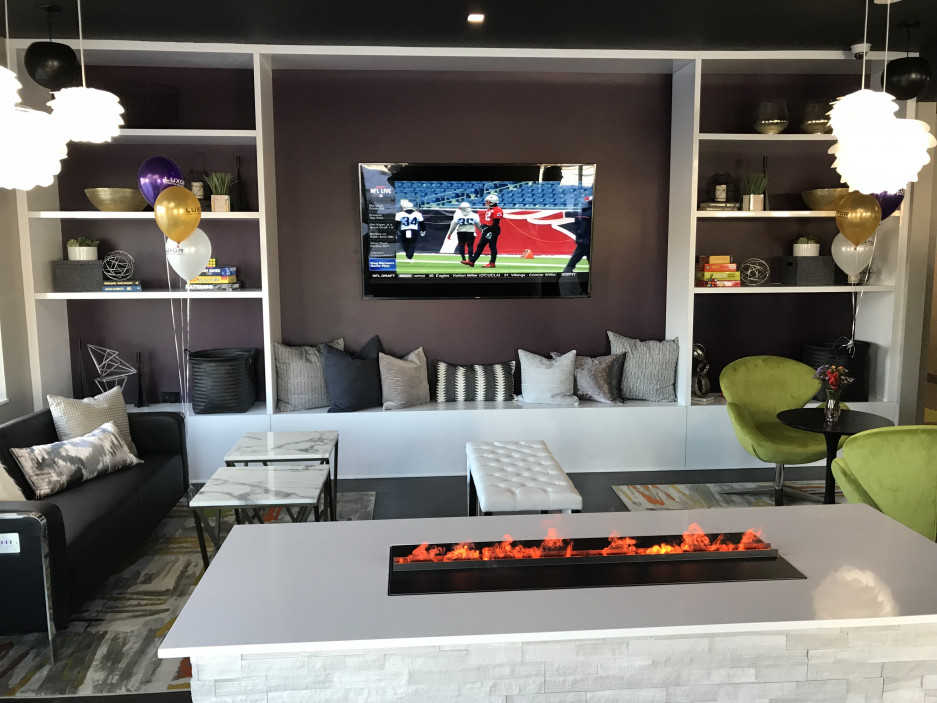 The Luxor II lobby lounge features a most unusual "fire pit": you can hold your hands over this one without scorching them, for the effect is produced by mist and lighting. 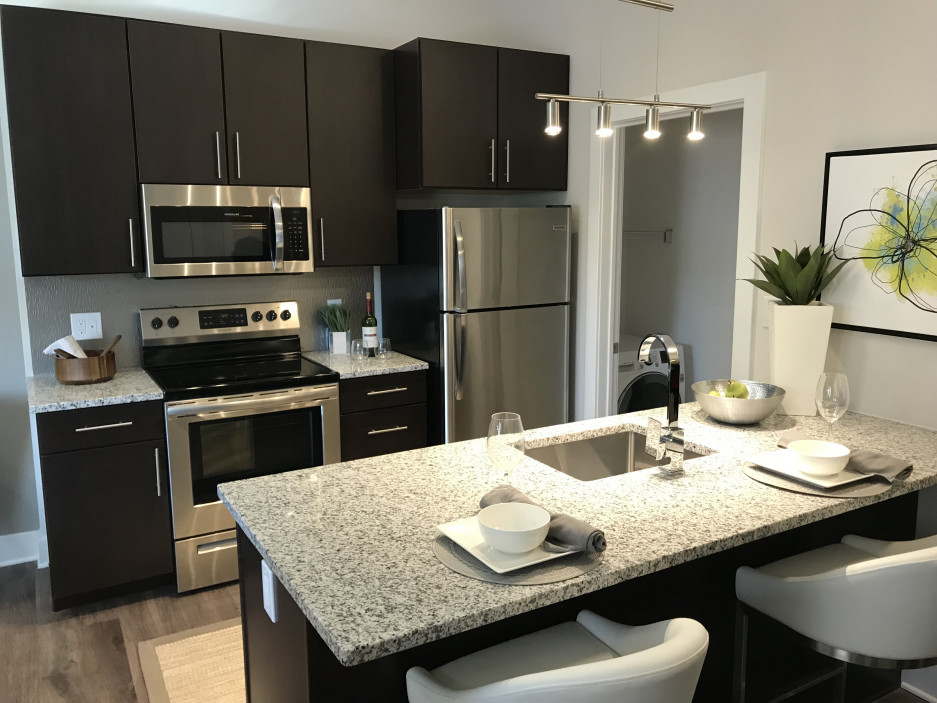 The kitchen in one of the Luxor II model units. 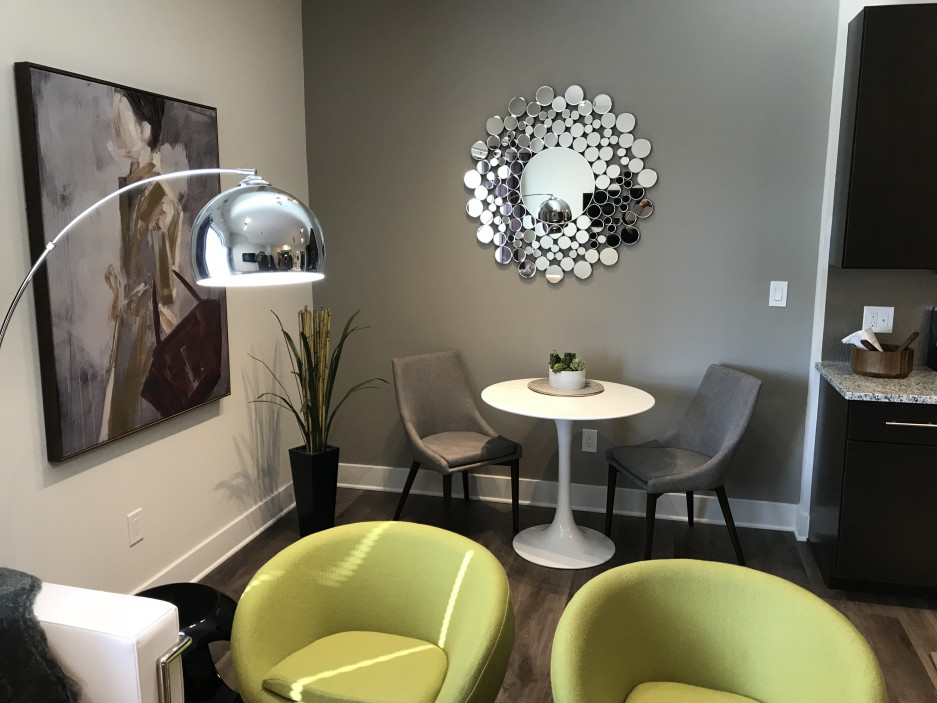 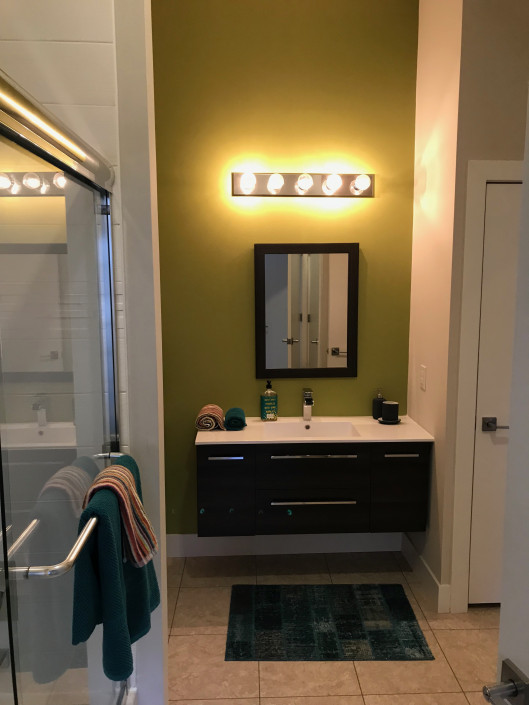 The bathroom in the furnished Luxor II model unit. 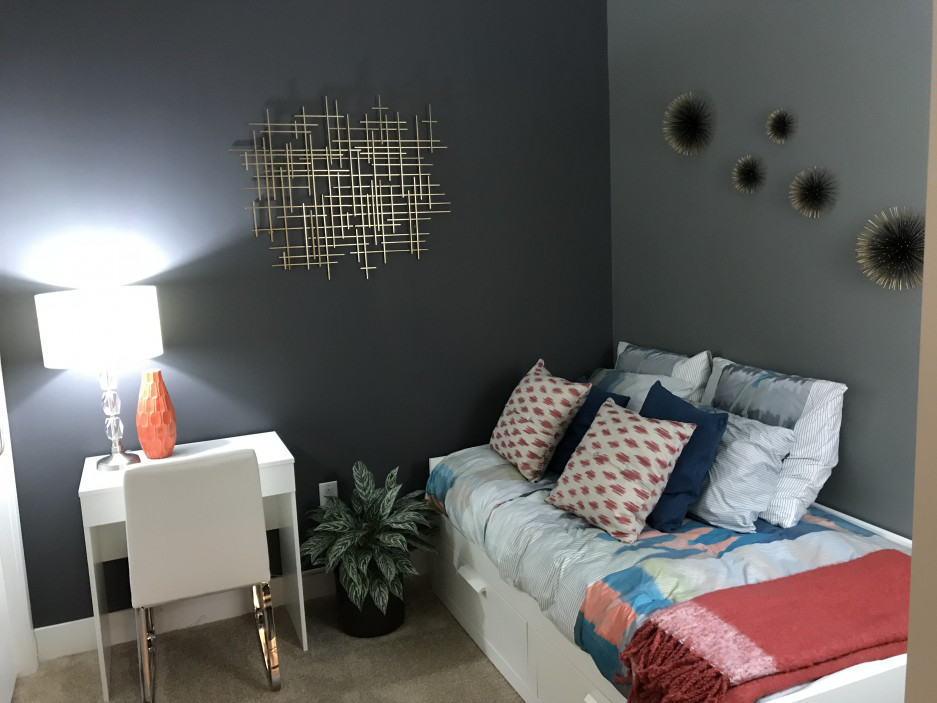 One of the bedrooms in the Luxor II model apartment. 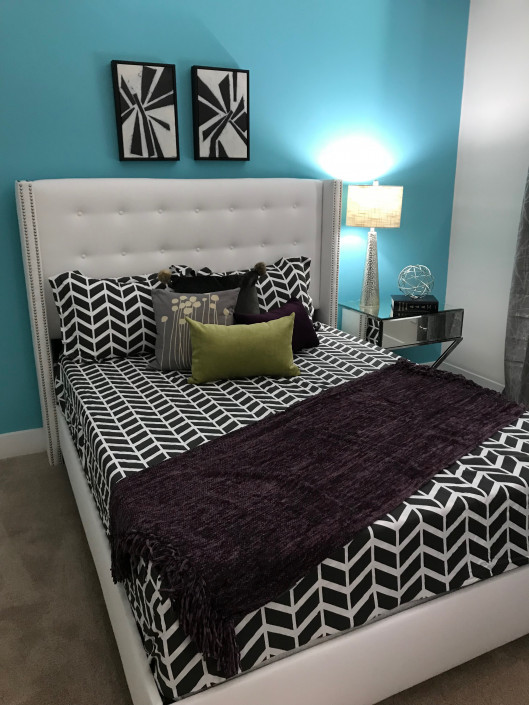 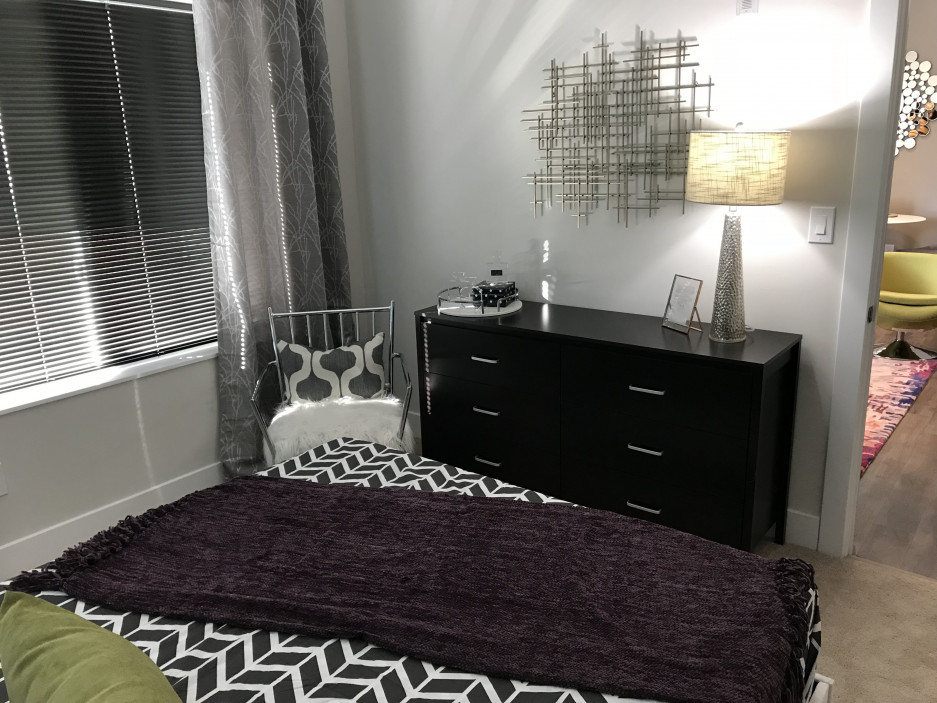 Westrum's in-house design team did the staging for the model units. 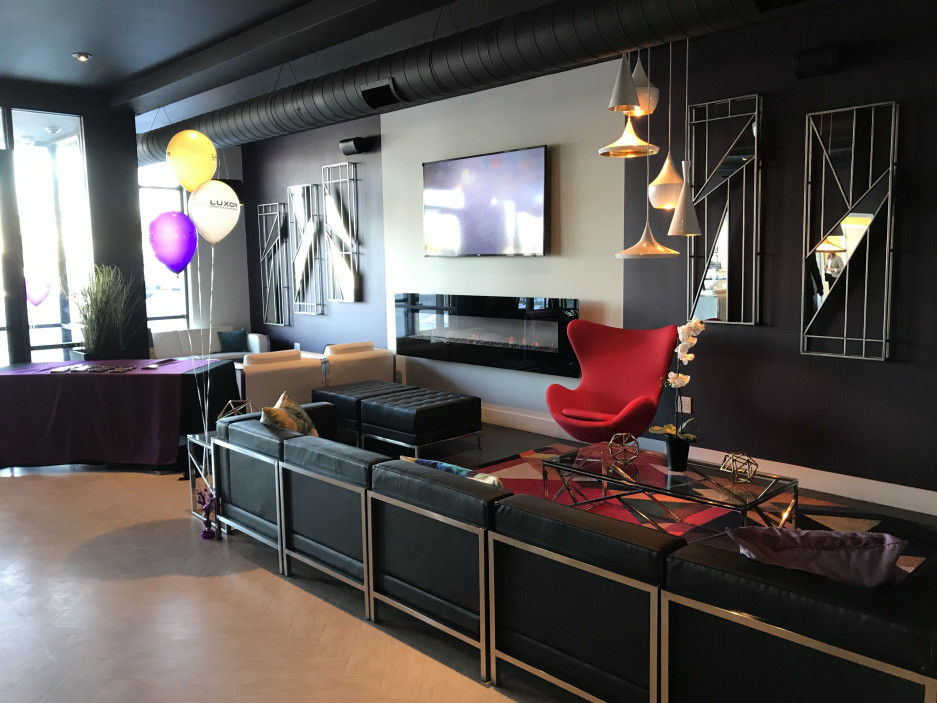 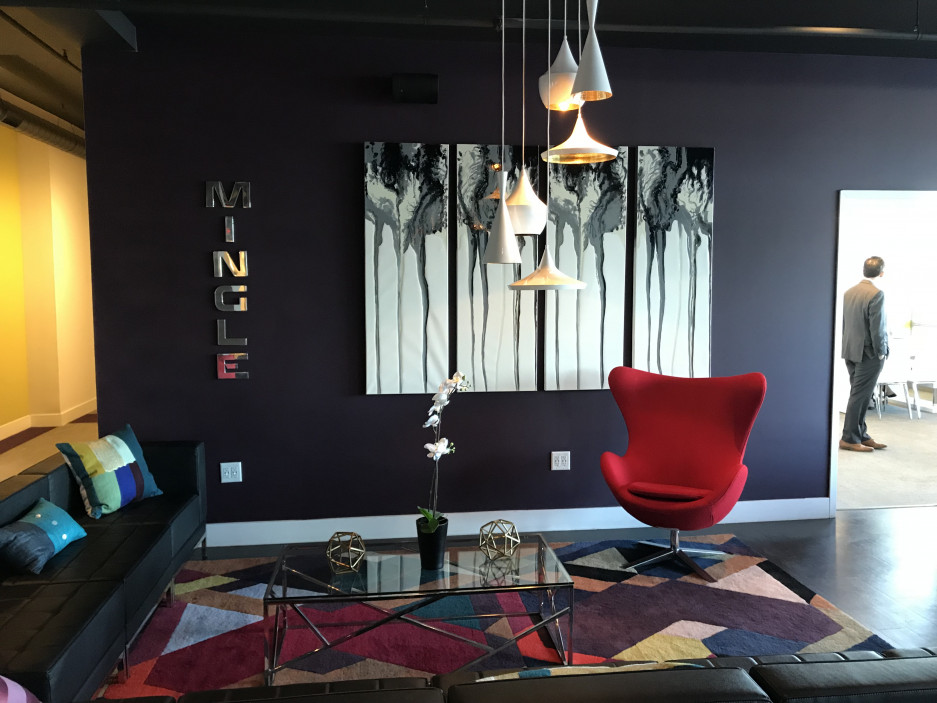 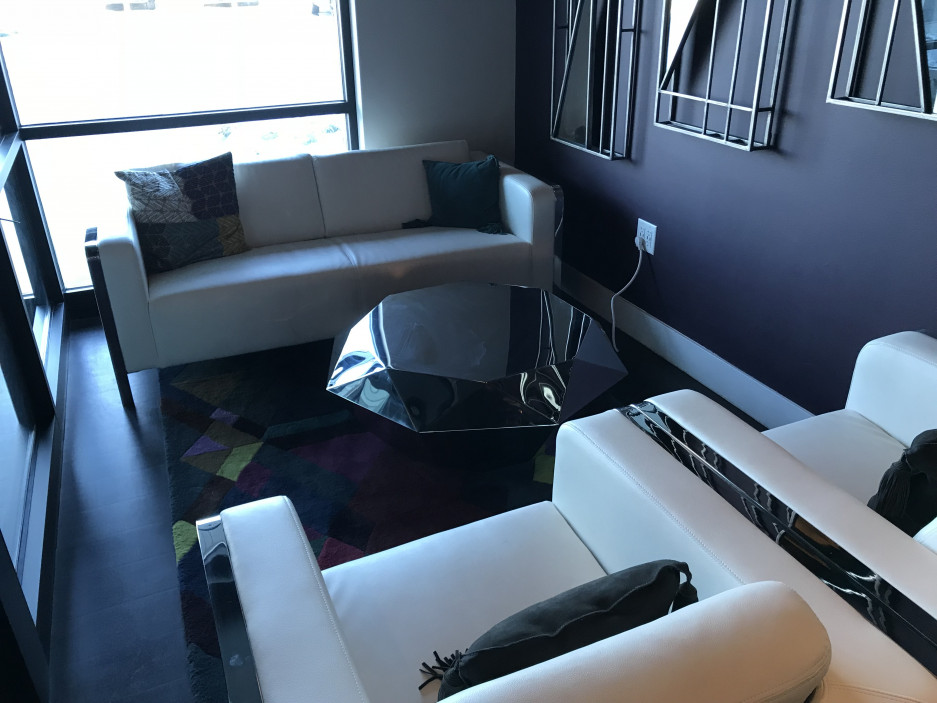 ...and couches and chairs with USB ports embedded in their arms for those who want to relax and work at the same time. 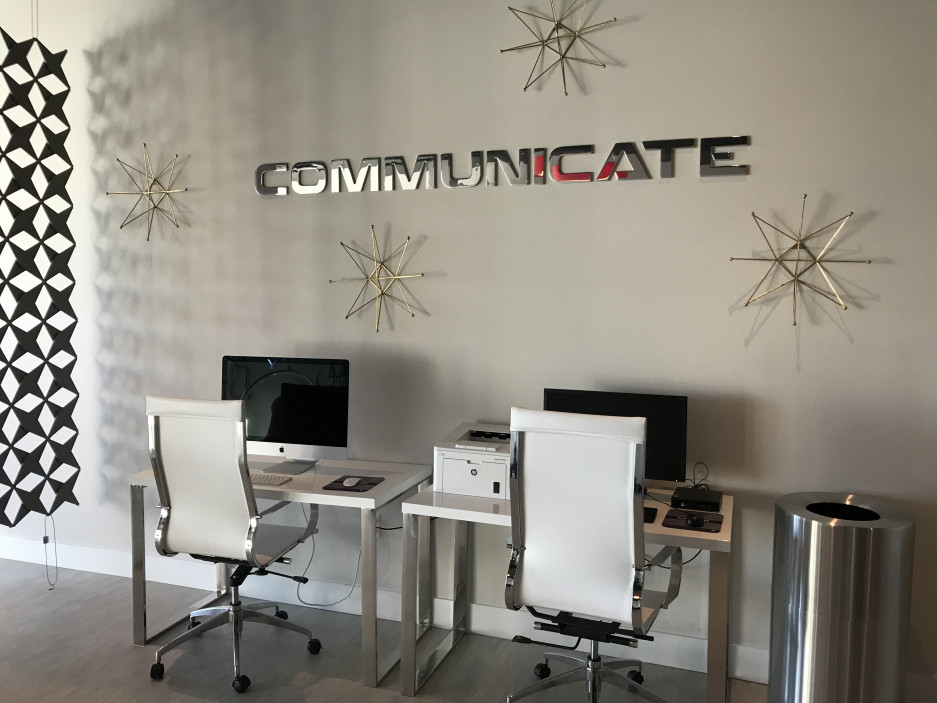 In the rear lobby are workstations for those who are strictly business... 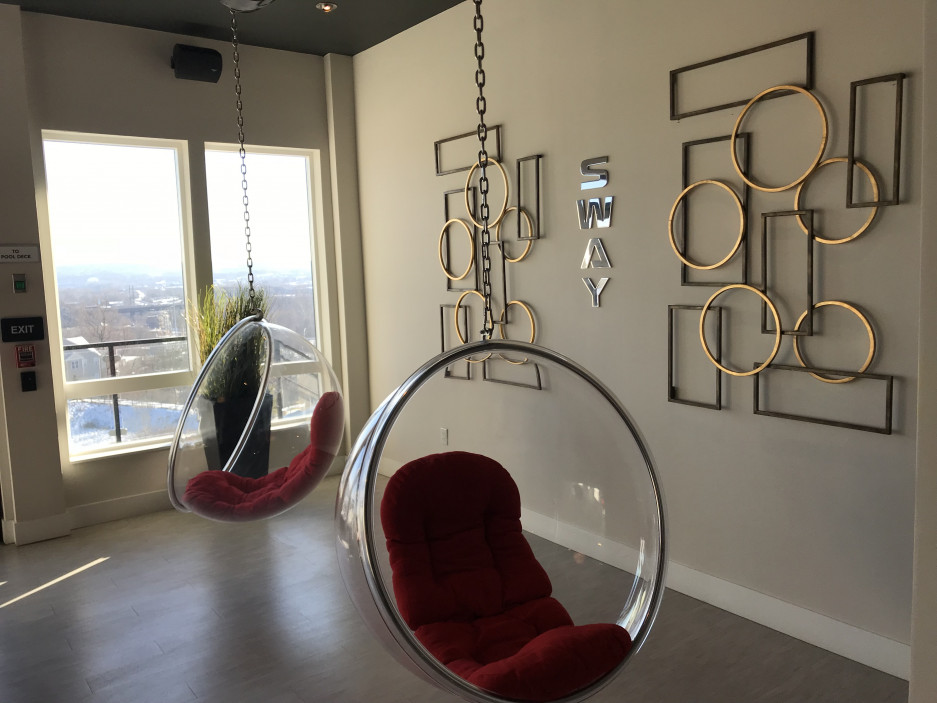 ...and suspended chairs for those who may be feeling playful. 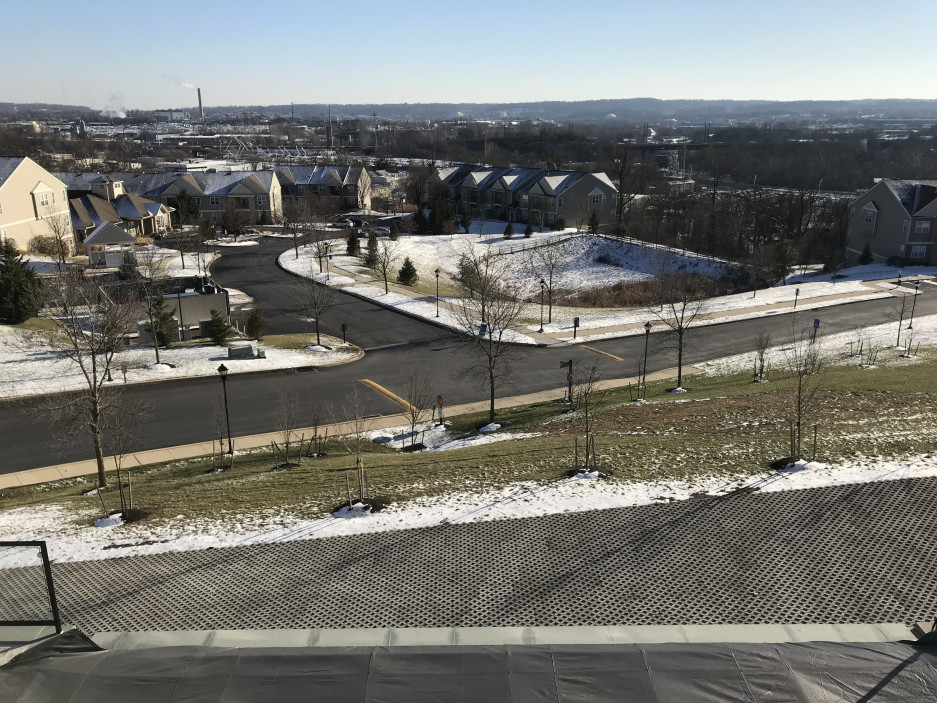 Both buildings are perched on top of a hill with a sharp drop to the south. Luxor I's waterfall pool, covered by a tarp at the bottom of this photo, is perched on the side of that hill. A senior apartment community lies to its south. 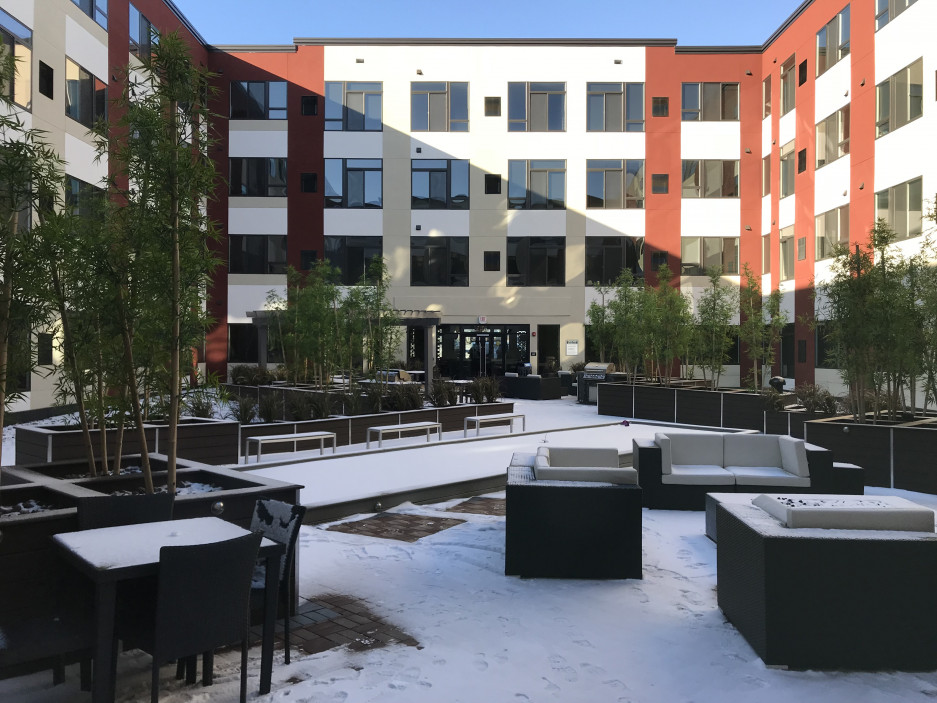 The Luxor I courtyard includes two barbecue grills and can be booked for residents' private events.

Luxor I also has a fitness center and yoga studio. 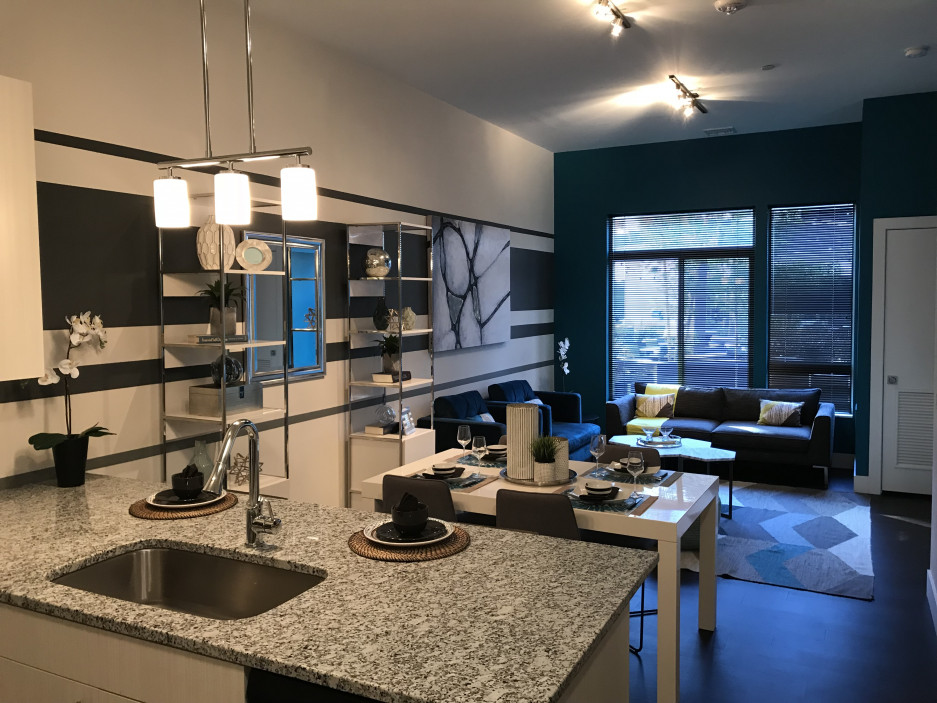 This is the furnished one-bedroom model apartment in Luxor I. 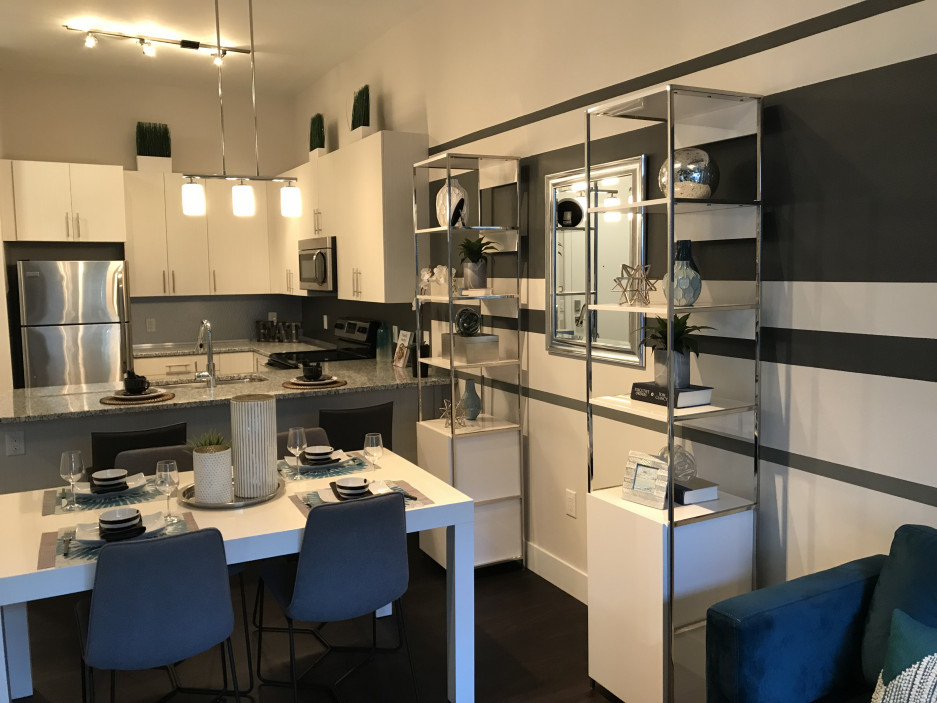 Like its sibling next door, it's outfitted in a casual modern style. 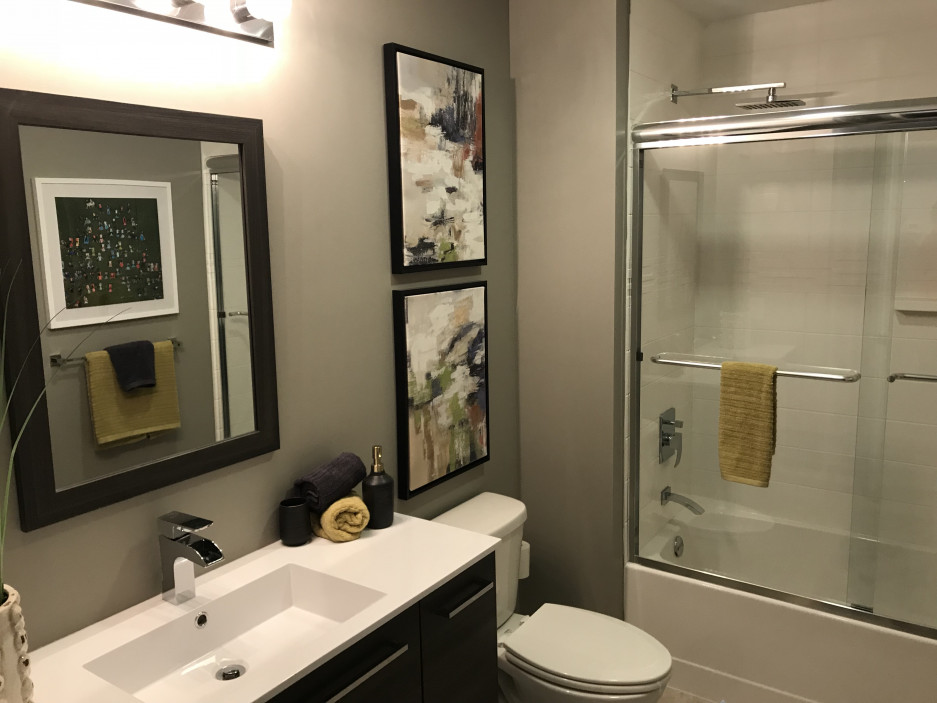 The bathroom in the furnished Luxor I model. 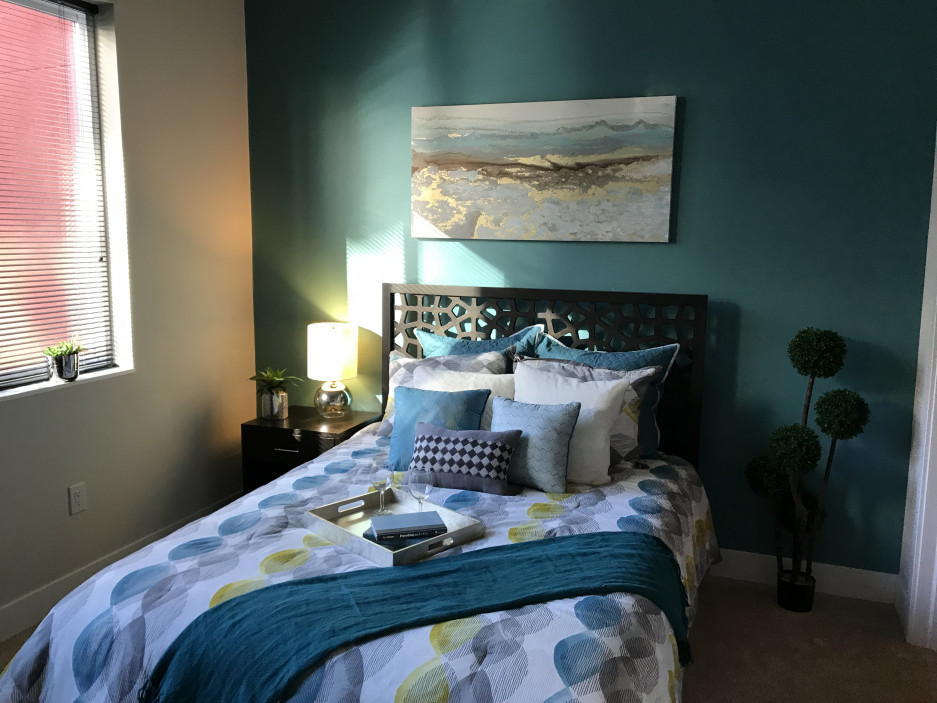 The Luxor I model's bedroom.