Forge Ahead Into the Past in Wawa for $1.1M

Over the centuries, the owners of this historic 1790 farmhouse have made changes so seamless you can't tell where the old ends and the new begins. The current owners maintained this tradition with a 2008 rebuild that made it as good as new. 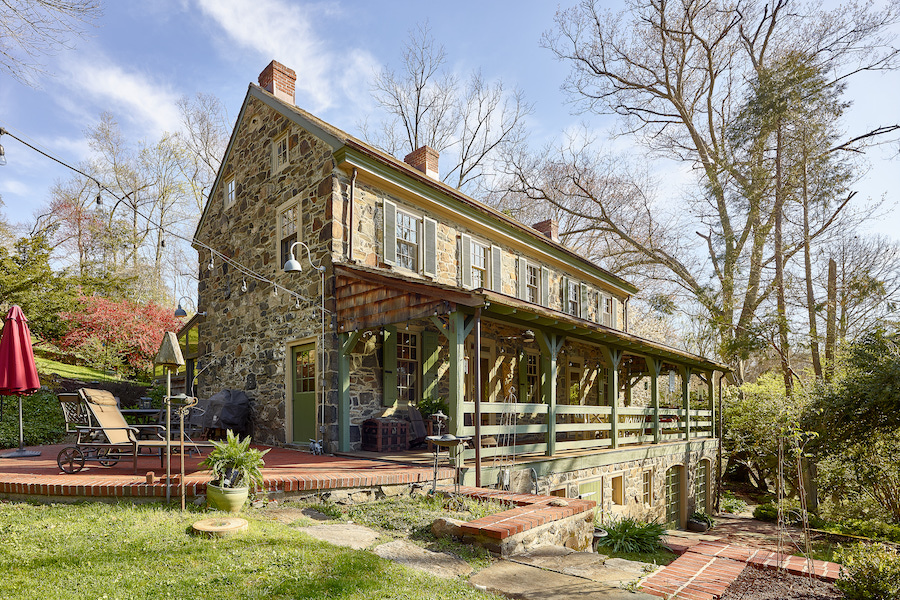 You won’t be able to buy gas here, and the coffee and sandwiches will be the ones you make in its kitchen, but this home that was in the hands of the founding Wood family for nearly 75 years will offer you the ultimate in convenience — and comfort and style and a bunch of other good things — in a beautiful package that dates to 1790.

Its history and that of the founding family are intertwined in more ways than one. The convenience-store giant traces its history to a forge in southern New Jersey in the early 19th century; this home, now known as Forge Hill, was built by farmer and miller Joseph Thatcher, who built a forge downhill from his home on nearby Chester Creek. 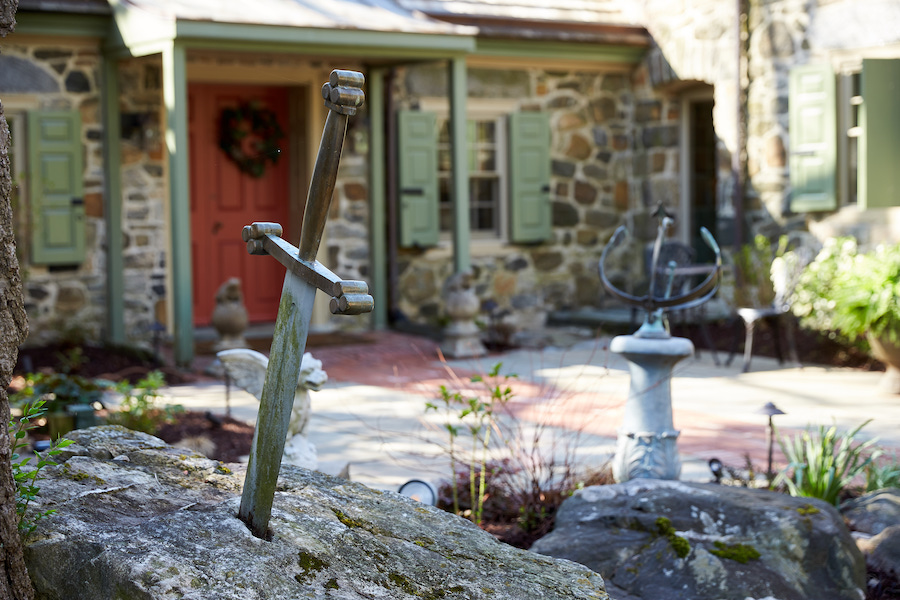 One of the distinctive elements added to the homesite is this sculpture, which references the legend of King Arthur. It was commissioned by the St. Davids Inn (now the Radnor Hotel) in 1978 and moved here in the mid-1980s

It became part of the Wood family’s holdings when George Wood purchased 1,000 acres of land along the creek in 1901 in order to establish his dairy farm and milk bottling plant. Most of this acreage is no longer owned by the Woods or Wawa Inc., but much of it along the creek now belongs to all of us thanks to a series of gifts they made to the Natural Lands Trust (now Natural Lands). Between those gifts and purchases of land by Middletown Township for open space conservation, 500 acres of protected land now surround this house, and its location well back from the road means its Baltimore Pike address doesn’t mean you hear the traffic on busy Route 1. 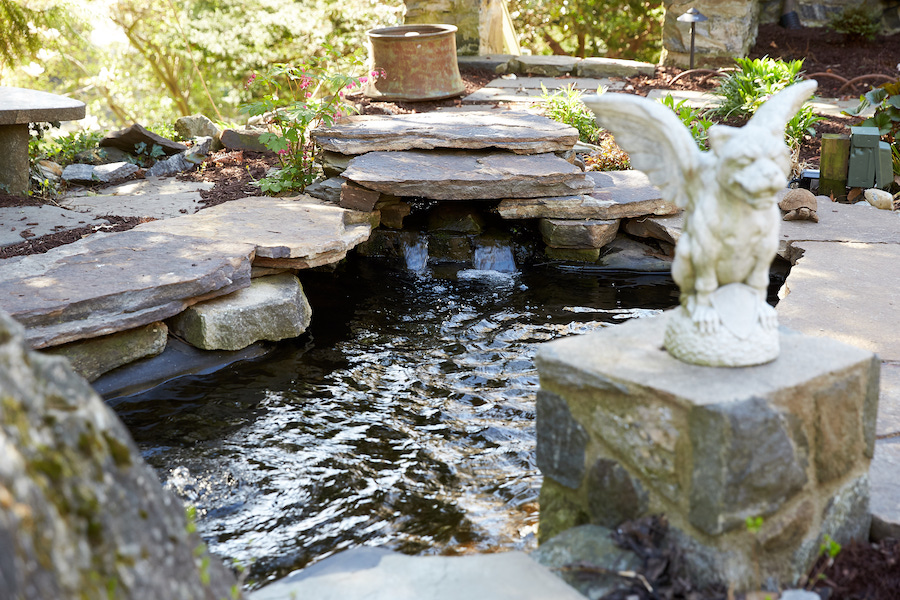 Water now flows from the sword in the stone, creating a fountain that feeds a small pond in the rear garden.

George left this home to daughter Dorothea upon his death in 1926. The avid horse-lover and horticulturalist began tinkering with the home sometime in the mid-1930s, building a major addition that held servants’ quarters, a new master bedroom and bath, a new kitchen and a two-car garage. “And closets. Lots of closets. She loved clothes,” says Kim Fink, the home’s current owner along with her husband Jerry. 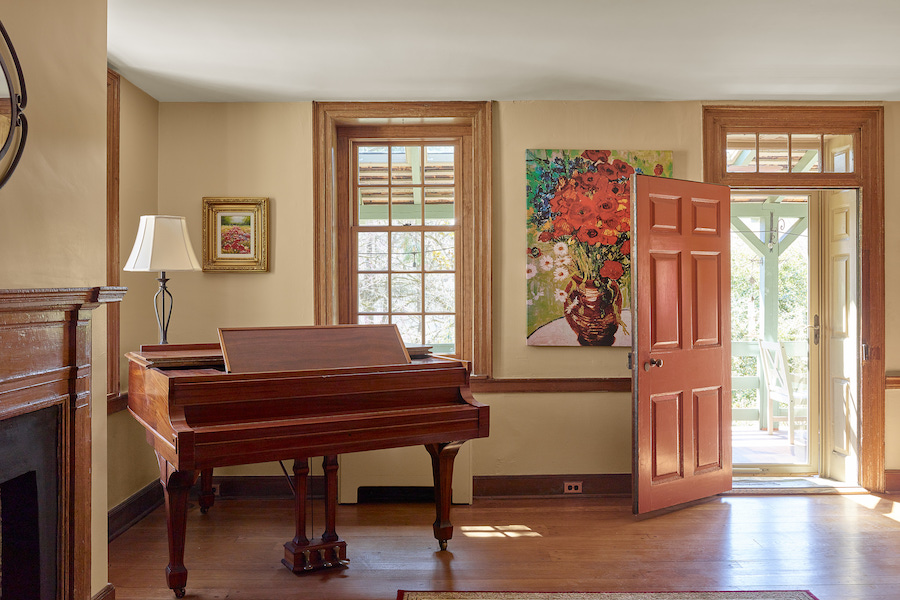 She also renovated a second, smaller house on the same plot. Around this time, the Pennsylvania Department of Highways decided it wanted to widen Baltimore Pike, and Dorothea persuaded it to move the road, which split her property in two, to a new alignment that passes to its south. 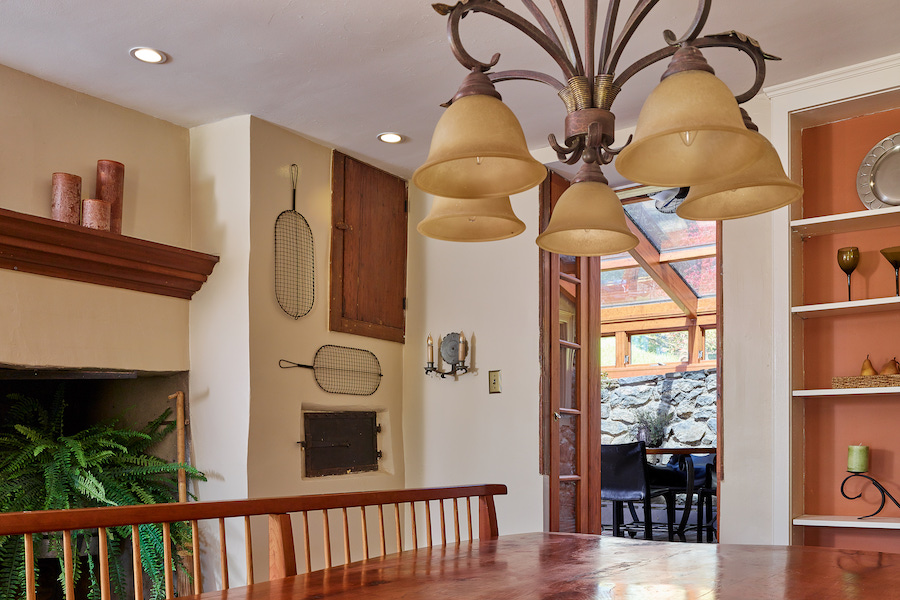 What made her additions special was the attention she paid to historical consistency. Architects she hired presented several options for expanding the home, and “she chose the simplest,” says Fink. The architects’ work was so historically accurate that it’s impossible now to tell which part of the home is the 1790 original and which part the 1939 addition. 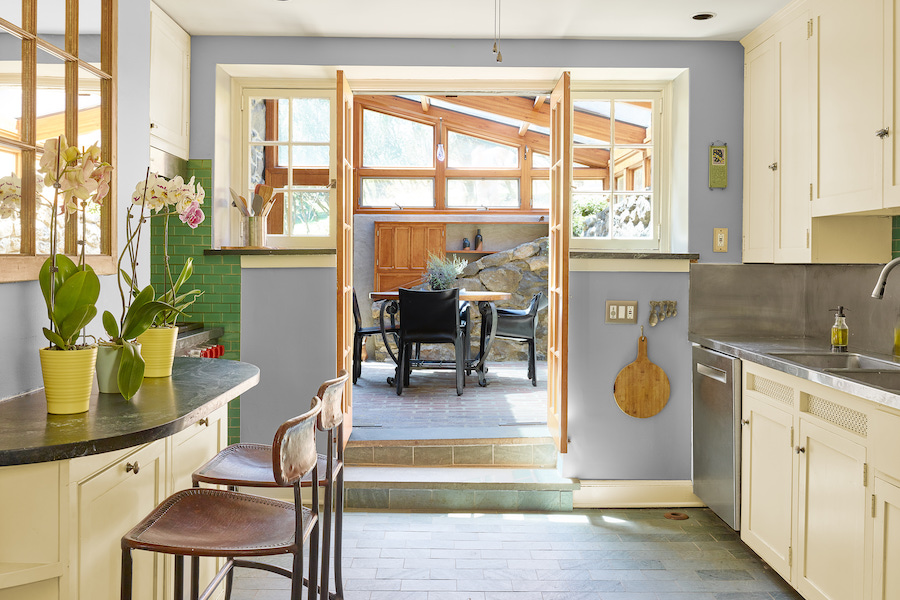 Dorothea donated 25 of the 29 acres she owned to Natural Lands in 1973; that acreage forms the core of the Wawa Preserve along Chester Creek. (Her horse Biddie is buried in a grave on the donated land.) Meanwhile, a Wood family friend bought the houses and the remaining four acres not long after that. 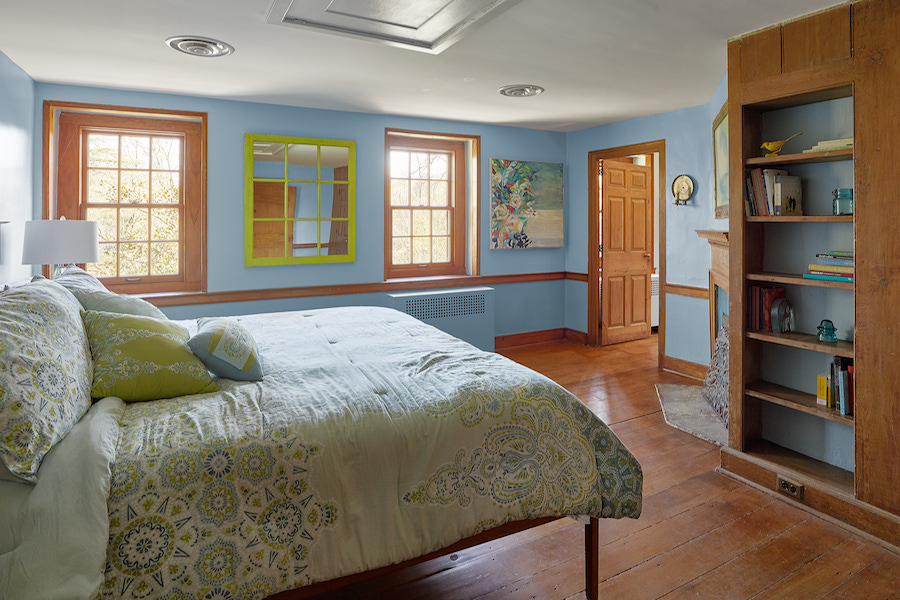 The Finks bought the property off this owner in 2005. “It was in bad condition when we bought it,” Kim says. “He had replaced all the lighting with fluorescent tube lights. The original stove from the 1930s was still in it, and leaking gas.” And the owner was a hoarder to boot. 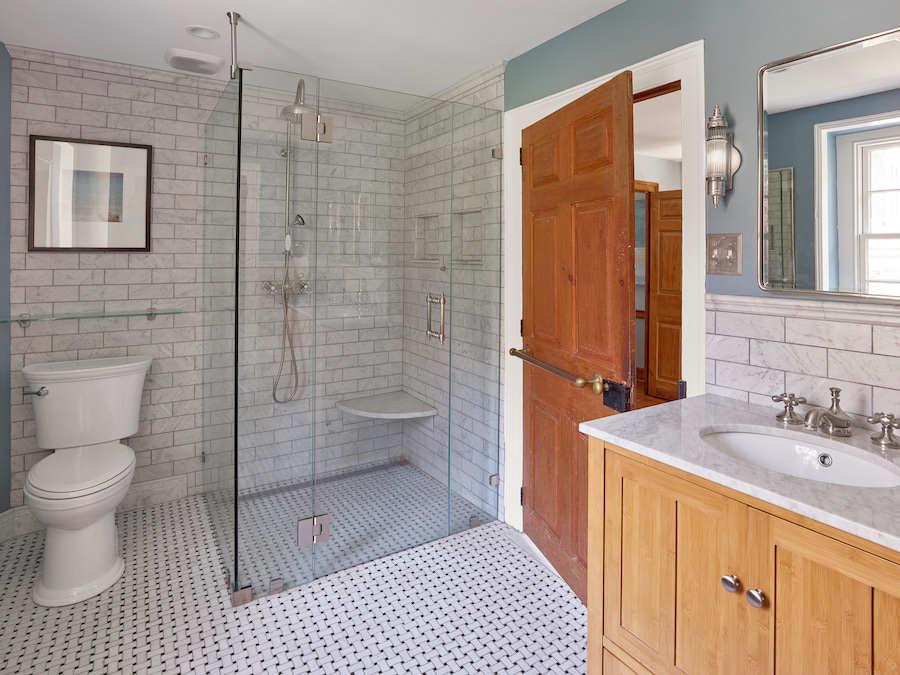 Those doors and that woodwork got restored as part of their total rebuild of the home in 2008. That project gave it a new roof, updated kitchen and bathrooms, and a whole host of energy-saving features, including high-performance Pella windows with invisible screens, slate caps on the chimneys, water-conserving toilets in the bathrooms, and a geothermal heating and cooling system. 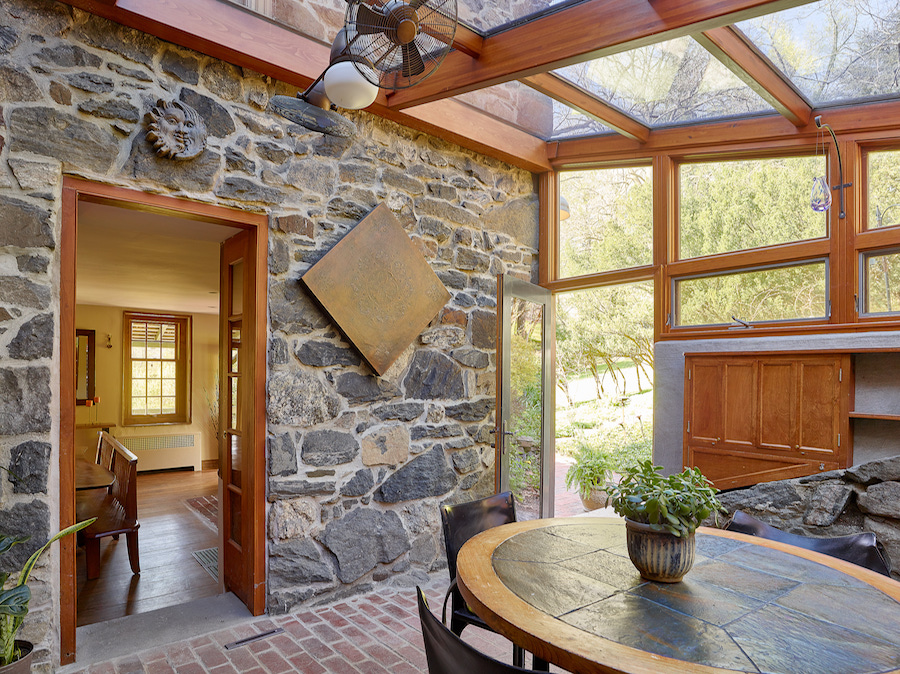 Their one addition: a sunroom that connects the dining room in the original home with the revamped kitchen in the 1939 addition.

And all of the work is so faithful that the home remains on the national and county historic registers. 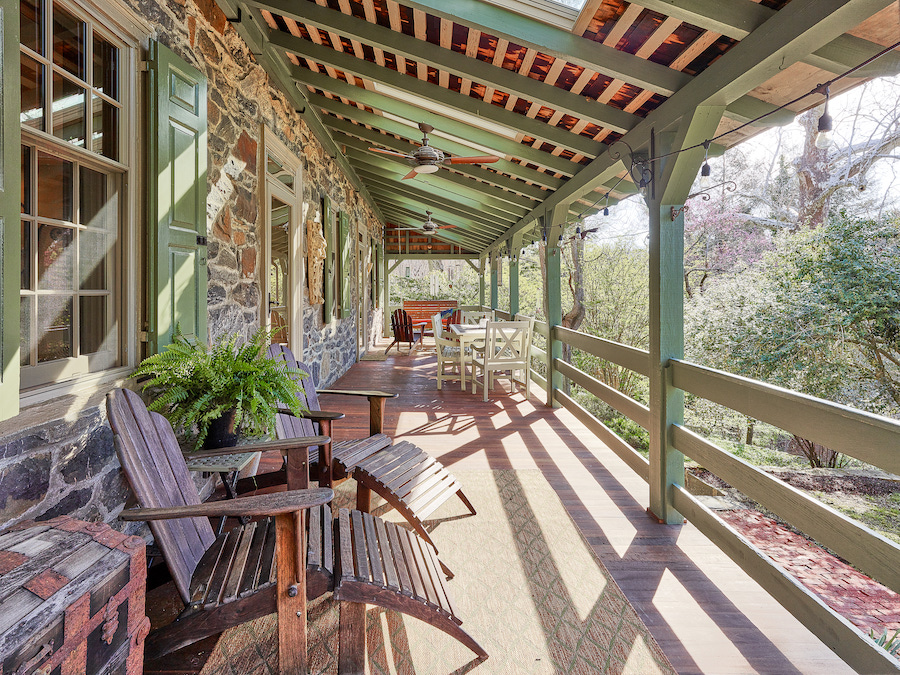 You could say that Jerry took his work home with him: he’s an engineer who specializes in historic restoration projects. And he didn’t stop with the 2008 renovation, either — he has made minor improvements over the years and a partial restoration after a fire caused by a freak power surge in 2015. “We’ve been working on that house until one minute before we put it on the market,” Fink says.

They’re selling this home now because their children have all flown the coop and they intend to downsize to a home on the site of their catering facility just up Baltimore Pike in Media. This in turn gives you a rare opportunity to own a one-of-a-kind historic farmhouse with a unique pedigree. The Finks, of course, hope you will love it as much as they do. So do I.

OTHER STUFF: At least one of the Fink children is as fond of this home as her parents are: daughter Aubrey, who called this listing to my attention, created this website as a visual love letter to it. And speaking of convenience, sometime around 2020, you will be able to drive about a quarter mile or so to catch what will then be the Wawa Regional Rail line into Center City.