Cue the Violins in Rittenhouse Square for $1.95M

Someone got played in the course of transforming this legendary violin shop into a magnificent private residence, but the result should be music to your ears. 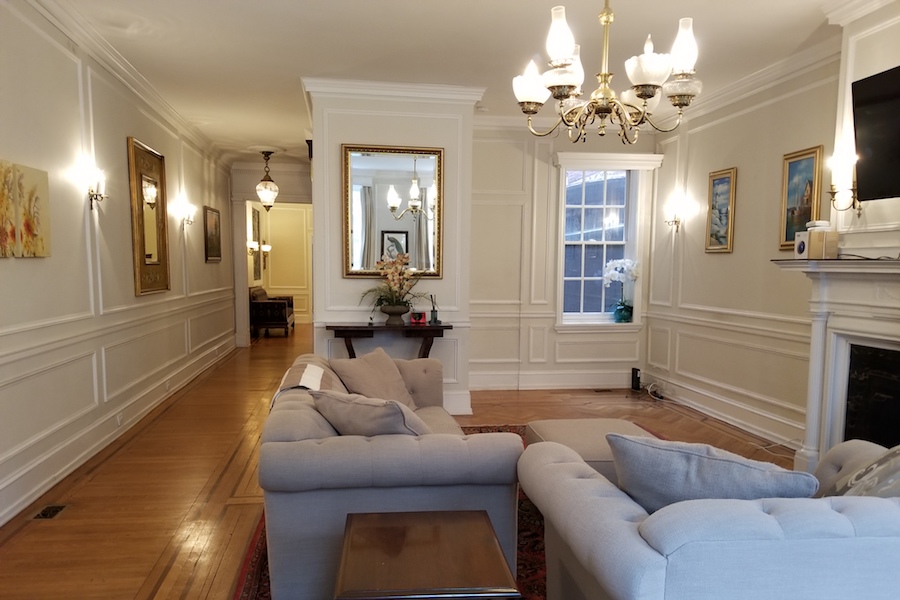 The score for this particular work has a few sad notes and one long off-key passage. But the end product is a symphony of luxury and elegance that will surely delight you.

It starts with William Moennig and Son, the legendary violin maker and restorer founded in 1909. Moennig moved his business into this 1853 townhouse just off Rittenhouse Square in 1938, and in it, four generations of Moennigs made and repaired violins to the immense gratitude of professional and amateur violinists from all over the country.

Those same violinists were shocked when the fourth-generation Moennig, William IV, closed the shop in December of 2009, exactly 100 years after his great-grandfather founded it.

But what followed that lamented closing might be even more shocking. 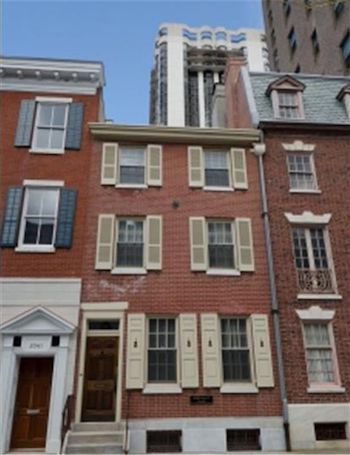 The house passed into the hands of an FBI agent-turned-private investigator named Don Richards. Richards, who lived in a penthouse apartment in the nearby Carlyle Apartments, also managed the personal finances of a woman named Blanche Miller after her husband, a Shell Oil refinery executive, left her an estate of $4 million upon his death. Miller had approached her Carlyle neighbor about assisting her with paying bills and household finances, and Richards agreed.

Shortly after that, Miller began a descent into dementia after recovering from a diabetic coma, but before she went too far down that slope, she gave Richards power of attorney. One of the first things he did after that was fire Miller’s housekeeper when he caught her rummaging through the heiress’ jewelry after Miller had to be hospitalized. But apparently, that episode gave him ideas, which he implemented when the lease on his apartment expired.

By then, the Moenning shop had closed, and William IV had put the house up for sale. Richards decided to buy it.

“He bought the house and redid it. Beautiful, beautiful job,” said Barry Levine, who Richards had hired as his personal assistant soon after taking over management of Miller’s affairs. “He furnished it, had all kinds of stained glass windows put in. He held all kinds of costume parties, had a grand piano installed.”

He also bought two other houses nearby, installing his girlfriend in an apartment in one of them, and making grand plans for their restoration. During this same time, Richards’ firm was conducting forensic investigations for a New York bank that was tracking down Bernie Madoff’s assets so that victims of his Ponzi scheme could be made as whole as possible. According to Levine, Miller was getting paid handsomely for this work, but it apparently wasn’t enough.

“He had plenty of money on his own, but he was also using Blanche’s money to purchase these three houses,” Levine said. 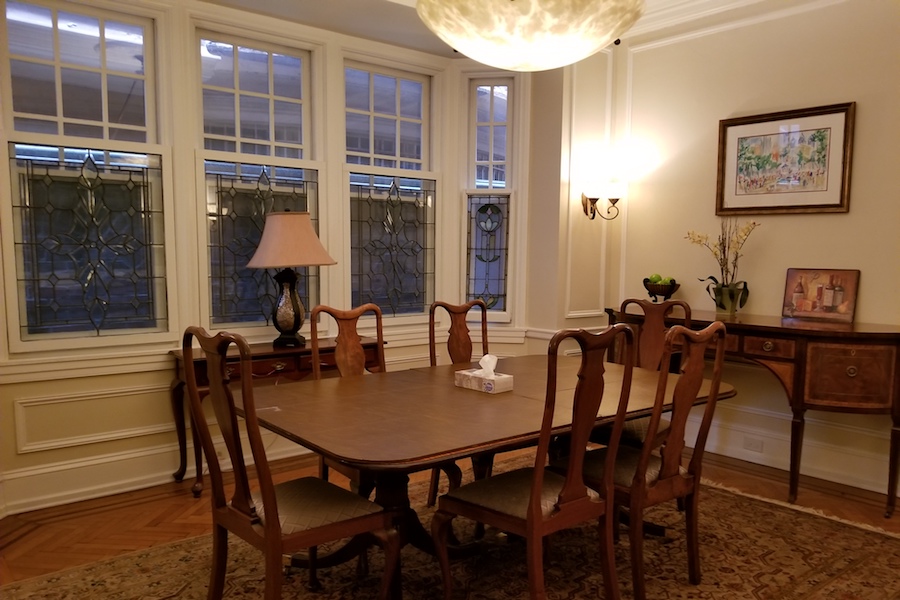 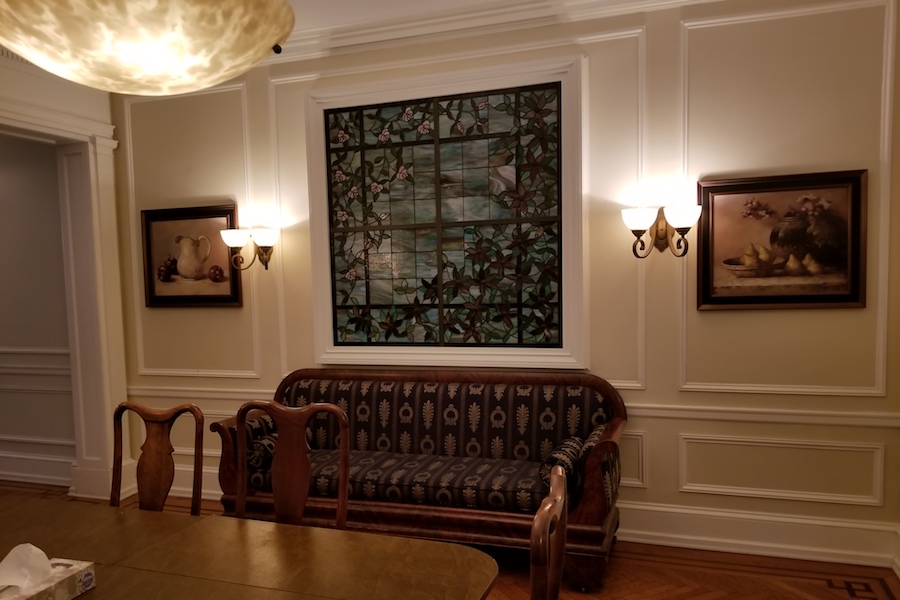 Levine himself had no knowledge this was happening, and he probably never would have found out had that housekeeper not blown the whistle on Richards. She contacted the Philadelphia Corporation on Aging and told someone there of her suspicions that Richards was bilking Miller, and a multi-year investigation followed. The end result was that Richards lost his houses and their furnishings, and he was required to make restitution to Miller.

Levine says the whole affair ended in Richards’ death, which he attributed to the stress he experienced after losing all his assets. (Miller is still alive.) Meanwhile, a British couple purchased 2039 Locust and rented out the home. 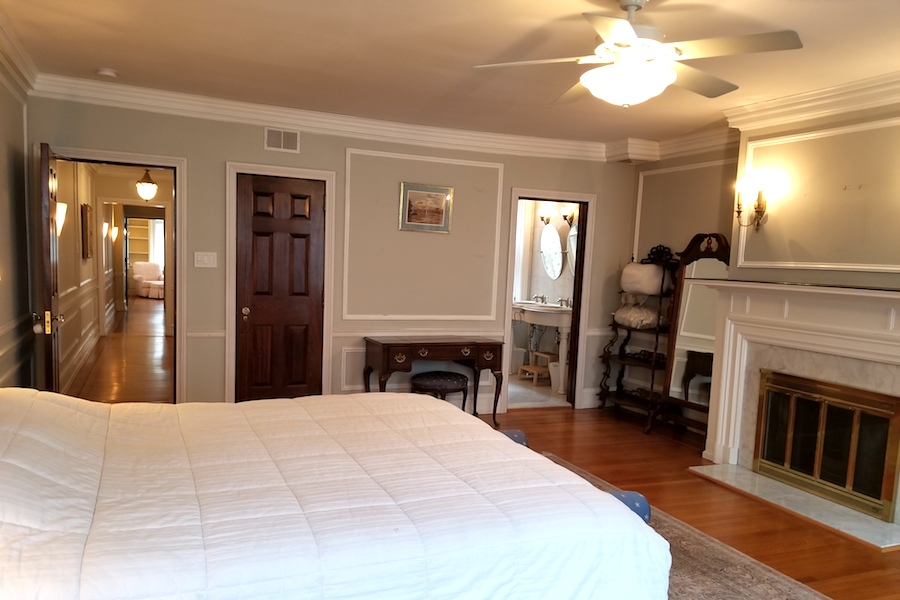 As the pictures you see here should make clear, the house is clean and sparkling and in great shape for its next owner. 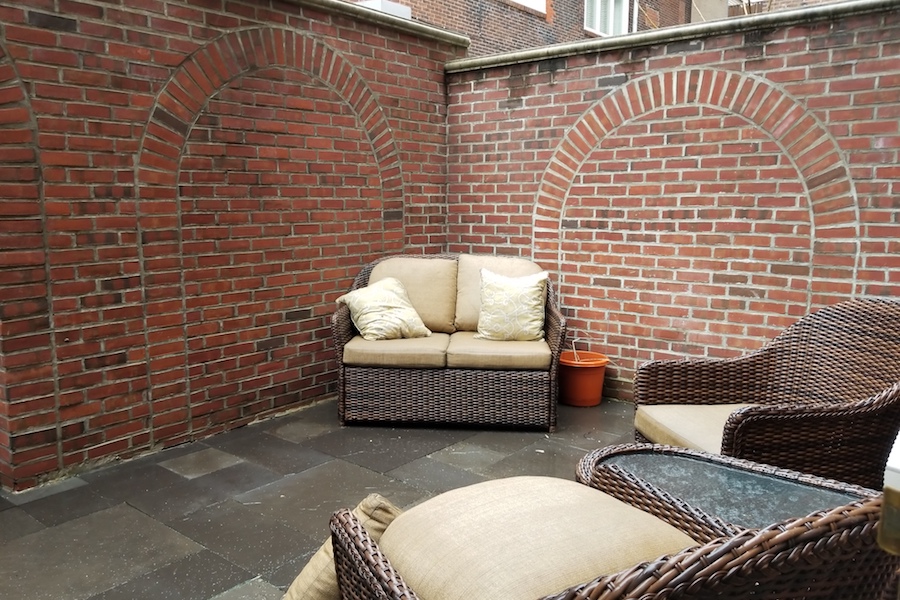 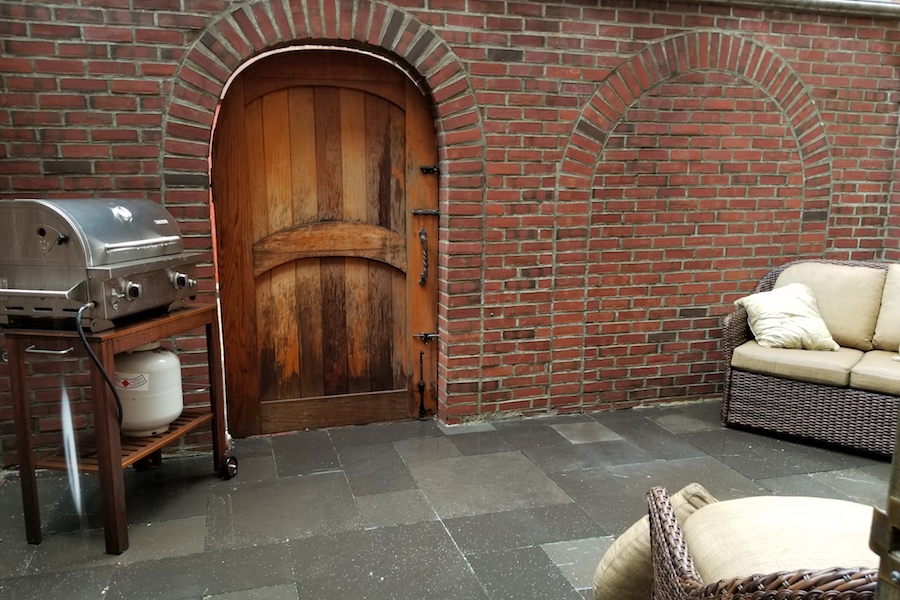 It’s flush with antique lighting and detailing, with leaded and stained-glass windows in abundance. Its dining room can accommodate ten guests comfortably, and it has a rear patio for outdoor entertaining. There are wood-burning fireplaces in the master bedroom and second bedroom suite, and the master bathroom has a radiant heat floor. 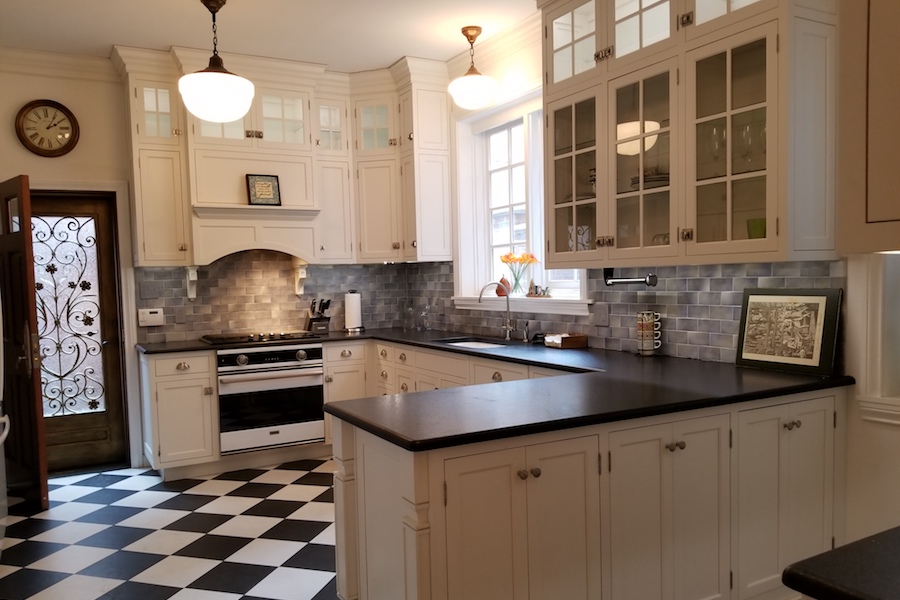 Imported Carerra marble lines the walls of the bathroom showers, and the kitchen appliances are all top-of-the-line professional grade. 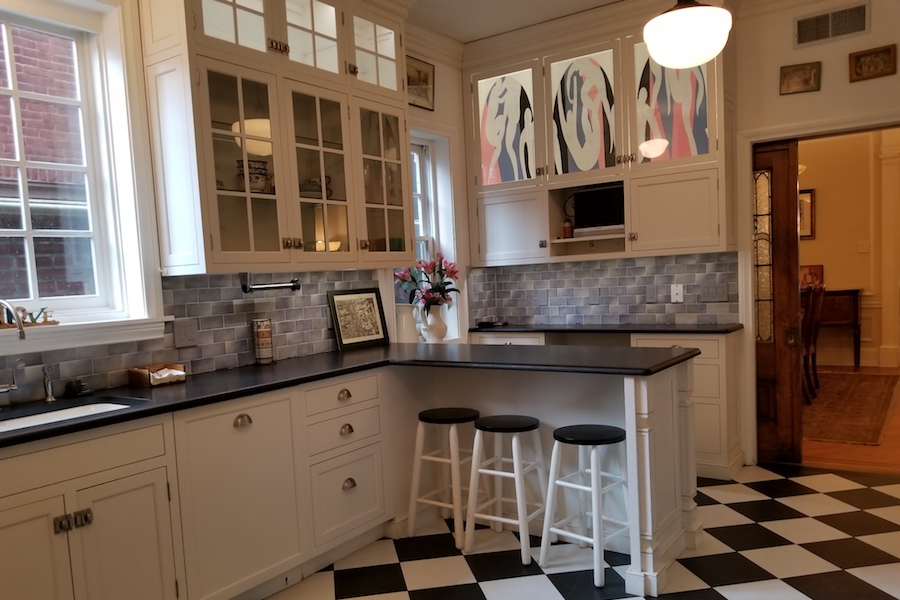 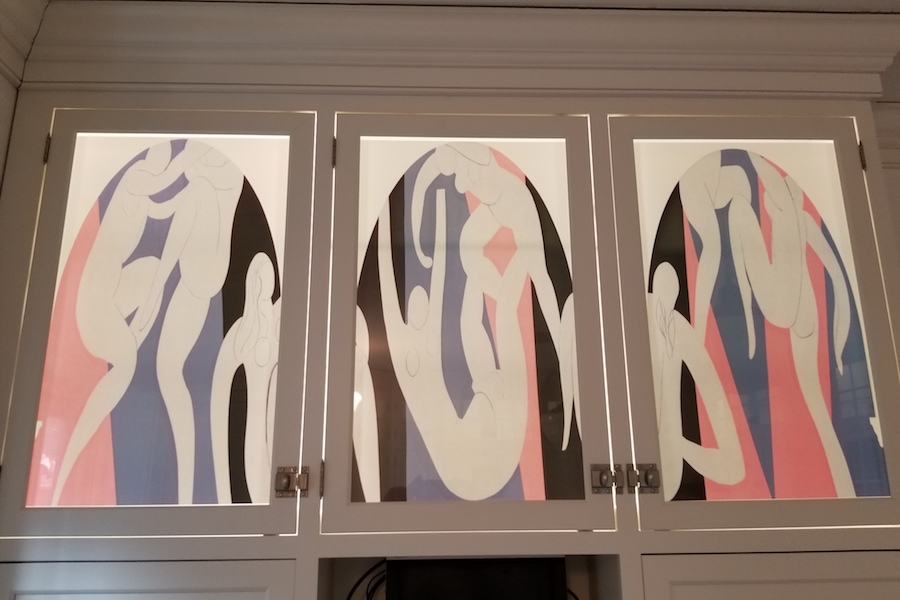 Detail of “The Dance” in kitchen

That kitchen includes one other unique touch: a reproduction of Henri Matisse’s “The Dance,” the mural triptych that hangs over the main stairwell of the original Barnes Foundation gallery in Merion Station.

You would be excused for experiencing a bit of schadenfreude after purchasing this magnificent mansion. But enough time has passed to make its backstory a mere memory.