The who's who of Philly architecture, then and now. 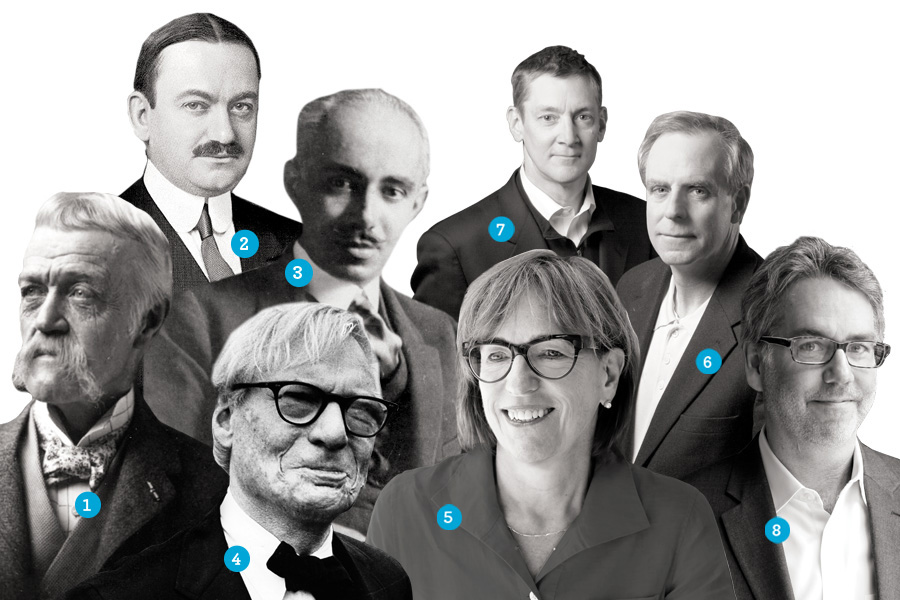 Philly’s Best Architects of the Past:

Benjamin Latrobe (1764-1820) was the man behind the Bank of Pennsylvania, America’s first (and frequently imitated, although no longer extant) Greek Revival building. Thomas Jefferson tapped Latrobe to complete parts of the U.S. Capitol. Some consider him the nation’s first professional architect. Frank Furness (1 above) (1839-1912) solidified his status with the Pennsylvania Academy of the Fine Arts. He designed hundreds of buildings during his career and influenced many future architecture greats. Horace Trumbauer (2) (1868-1938) was the oft-underappreciated architect behind the Philadelphia Museum of Art. He helped launch the career of his assistant, Julian Abele (3) (1881-1950), the first African-American student to graduate from Penn’s Department of Architecture. George Howe (1886-1995) is significant for several reasons: He worked at Furness’s firm, he co-designed the PSFS building; and he collaborated with Kahn on housing developments. Louis Kahn (4) (1901-1974), obviously, was one of the greatest architects of the 20th century. He was raised in Philly, went to and taught at Penn, and partnered with other architects here. Kahn produced many stellar buildings still of influence today, but most of them aren’t in Philadelphia (see: Kimbell Art Museum in Fort Worth and National Assembly Hall in Bangladesh).

Philly’s Best Architects of the Present:

Robert Venturi is no longer practicing, but is renowned for spearheading the postmodern movement. His and wife Denise Scott Brown’s legacy lives on today through VSBA Architects & Planners — which is headed by the lauded Dan McCoubrey. (McCoubrey won an award from the Urban Land Institute this year for the South Philadelphia Community Health and Literacy Center.) Cecil Baker is prolific, but his recent look-at-me local builds include Tom Scannapieco’s 500 Walnut and Carl Dranoff’s One Riverside. His influence over Philly is real: He serves on the city’s first Civic Design Review Committee, where he (thankfully) isn’t shy with his opinions. Laurie Olin’s landscape architecture firm, OLIN, has made the grounds of the Barnes Foundation, the Washington Monument and Bryant Park noteworthy. OLIN CEO and partner Lucinda Sanders (5),also a trailblazer, has a major role in the 30th Street Station District Plan. Stephen Kieran (6) and James Timberlake (7) (of KieranTimberlake) are internationally recognized for their many large-scale projects, from Dilworth Park to the 25-year master plan for the new Penn’s Landing area to the stunning U.S. Embassy in London. Scott Erdy (8) and David McHenry (of Erdy McHenry) have done some big things here: Evo at Cira Centre South, the Schmidt’s Commons, and VUE32, a new mixed-use space in University City.

Published as “Know Your Starchitects” in the November 2017 issue of Philadelphia magazine.