The Bourse Enters Its Fourth Phase

What began as a commodities exchange will now become an upscale food court where locals and visitors can break bread together. It's also another example of how food is becoming a tourist draw. 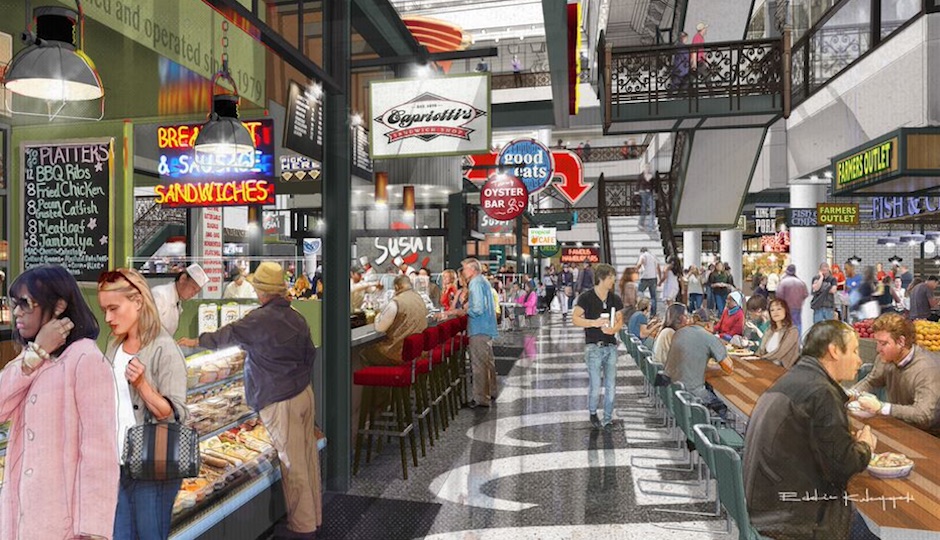 In case you haven’t heard yet, the second-most-popular tourist attraction in Philadelphia after the Liberty Bell/Independence Hall duo is the Reading Terminal Market, our homegrown, fresh-and-local food emporium that’s been a favorite with locals since 1893.

MRP Realty executives must have had more than a few lunches in the RTM’s Center Court as they figured out what to do with their newest asset, the historic Philadelphia Bourse.

If they didn’t, they at least read up on what makes food markets such visitor magnets in cities like Seattle, Los Angeles and now even New York in addition to here, for they’re betting that a unique, (mostly) local food experience will bring visitors and residents alike to the Bourse’s former trading floor. They’re also betting that this amenity will make the office space above it that much more attractive.

And with this bet, MRP and its leasing partner Cana Development send the Bourse into the fourth phase of its existence, this one a slight but significant evolution from its third.

What are those four phases? Glad you asked.

Phase One: The Great Exchange

“Bourse” is the French term for a stock exchange. In 1891, grain and commodities trader George Bartol adopted the term for the new trading market he established here in Philadelphia. The Philadelphia Bourse was unlike other exchanges in existence at the time because it served as a stock exchange, a maritime exchange (for contracting for the shipment of goods to and from overseas), and a commodities exchange all in one.

The building George and William Hewitt designed for Bartol opened in 1895. It featured a three-story atrium above the main trading floor plus six more floors of offices above the atrium. In addition to the trading floor and maritime exchange, the building contained dining rooms, a music room, a commercial library and meeting rooms.

Trading at the Bourse continued until sometime in the 1960s. After that, it remained an office building until its sale in 1979.

The Kaiserman Company acquired the building and converted its basement and lower three floors into a shopping mall filled with high-end boutiques; Yves Saint Laurent was its highest-profile occupant. The top floor housed a food court with a mix of standard food-court fare and some adventuresome eateries. A State Store and a nightclub in the basement rounded out the mix.

It turned out Philadelphia wasn’t quite ready for that kind of upscale shopping experience. The upper-level boutiques gradually closed and the State Store moved, leaving the nightclub, a spa and the food vendors as the only occupants. Eventually, the spa and the nightclub also closed.

After the mall proved a bust, Kaiserman reconfigured it, turning the upper two levels into more office space. All of the retail was shoved onto the main floor and downscaled significantly. One side of the floor housed a food court containing the usual shopping-mall staples — a mix of chain eateries like Bain’s Deli and Sbarro and mom-and-pop places serving up cheesesteaks, chicken, Chinese and Mexican fare. On the other side, the retail shops mainly sold tourist trinkets, gifts and cards for the visitors to take back home.

This was the building MRP purchased earlier this year.

The Bourse will remain a food court under MRP’s vision for the main public space, but it will be a different kind of food court. Instead of lowest-common-denominator fare, this food court will emphasize distinctive cuisines from several different cultures, produced in all but two cases by chef-owners local to the region around Philadelphia. 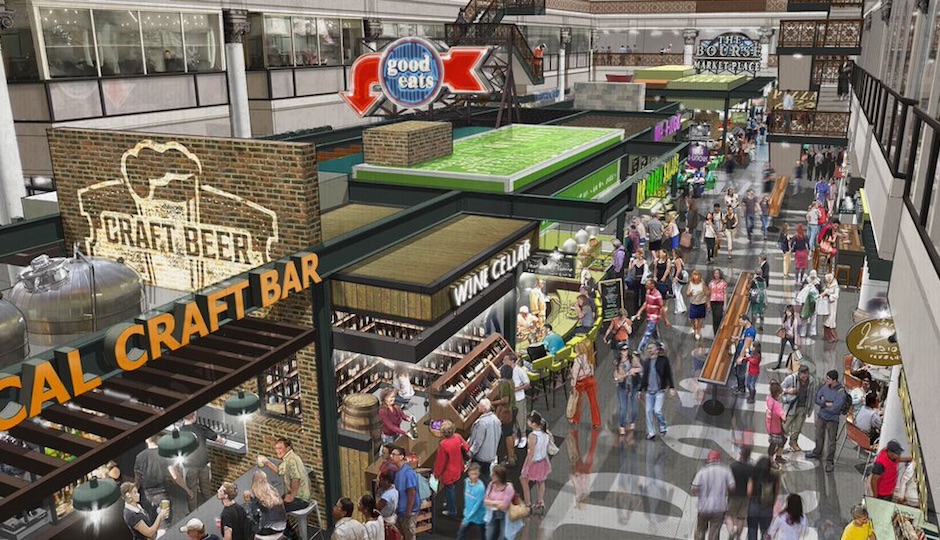 This overhead view shows the arrangement of the eateries around a central core.

The makeover by Groundswell Design, working with project architect BLTa, combines historic preservation with some modern alterations. Chief among the latter: The food vendors will move from the periphery of the space to its center, occupying booths that back onto a central service spine. It’s an ingenious setup that maximizes space for seating, eating and drinking.

MRP and Cana’s vision for the food court has it functioning much like the Reading Terminal Market does today, serving the needs of area residents while also offering an experience visitors will find highly appealing. “The hall will reflect the quality and diversity of the food scene in Philadelphia,” Michael Morris, principal at Cana Development, said at Monday’s announcement.

The building’s historic status and character factors heavily into the way local officials view the project as well. Old City District Executive Director Job Itzkowitz mentioned how “architecture influences the dynamic of Old City” in his remarks at the event, and at least two public servants — City Councilman Mark Squilla and City Representative Sheila Hess — namechecked Philadelphia’s status as a World Heritage City by way of explaining how this makeover would bolster the city’s visitor appeal.

And the tourism promotion folks are eager to promote this new version of the Bourse as a destination for the out-of-towners. “Food and history are top draws for tourists,” Laura Burkhardt, vice president of visitor appeal at Visit Philadelphia, told Monday’s audience. “We can’t wait to start promoting this.”

MRP and Cana seek to model the Bourse after places like New York’s Chelsea Market and Washington’s Union Market — places that now cater primarily to the shopping-and-dining crowd yet retain the air of a working food market. The Reading Terminal Market is the mirror image of this: an actual working food market that also happens to appeal to the shopping-and-dining crowd.

The food market patrons will no doubt hope that the Bourse food court does as well as its owners and the tourism-promotion people hope, for its popularity with visitors has made shopping for food at the RTM an exercise in endurance whenever there’s a convention in town or a gate show at the Pennsylvania Convention Center. But if the tourism-promotion people succeed, the relief may prove short-lived, for they hope the Bourse will help draw even more visitors to Philadelphia on top of the record-setting hordes now visiting (42 million in the five-county Southeastern Pennsylvania region last year, according to Burkhardt).

MRP has not yet announced what tenants will occupy the perimeter of the Bourse’s main trading floor, but if the renderings above are any guide, some of them will be food-related as well. What they won’t be is tourist traps.