Historic Preservation Gets A Big Helping Hand From the National Trust

Mayor Kenney used the occasion of the trust's adding Philadelphia's historic neighborhoods to its list of "National Treasures" to tout steps the city is taking to strengthen its preservation efforts. 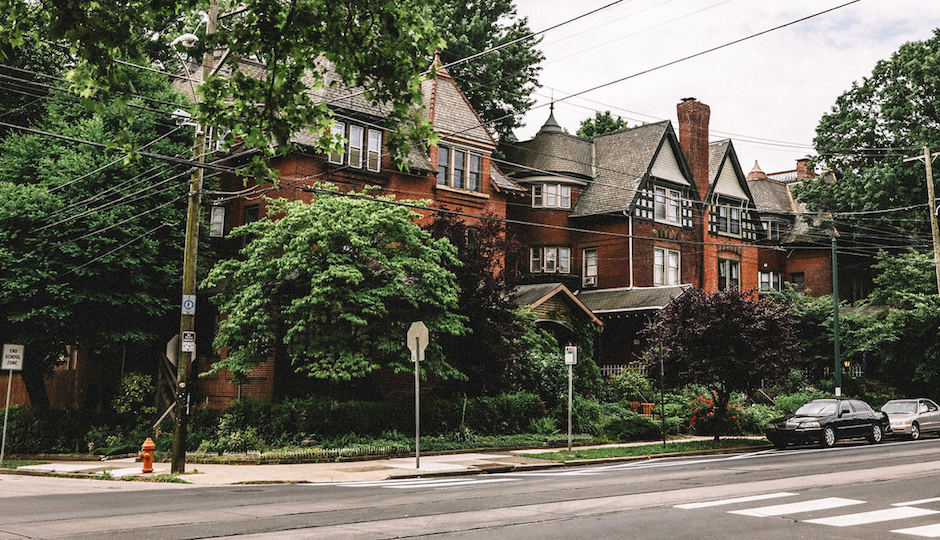 The designation of Philadelphia’s historic neighborhoods as a National Treasure covers not just the well-known historic precincts of Center City — it extends to neighborhoods all over the city, from the factory town of Tacony to colonial Germantown to the 19th-century streetcar suburbs of West Philadelphia, shown here. | Photo: Neal Santos for the National Trust for Historic Preservation

The designation of Philadelphia as the first and so far only World Heritage City in the United Statea two years ago brought with it bragging rights but not much in the way of resources to preserve its historic character.

Today’s official announcement that the National Trust for Historic Preservation has added Philadelphia’s historic neighborhoods to its list of National Treasures will do something to help preserve that character.

At a midday ceremony in the studio of the KieranTimberlake architectural firm, Mayor Jim Kenney, National Trust for Historic Preservation President and CEO Stephanie Meeks and Preservation Alliance for Greater Philadelphia Executive Director Paul Steinke explained how the designation would both help the city bolster its historic preservation efforts and use its historic structures as engines of economic renewal, especially in the city’s more disadvantaged districts.

“Between 2001 and 2014, the city had 277 construction projects that used historic tax credits,” Steinke said. “Those projects represented more $2.1 billion in development costs, created more than 32,000 construction jobs, and generated more than half a billion dollars in state and Federal taxes.” 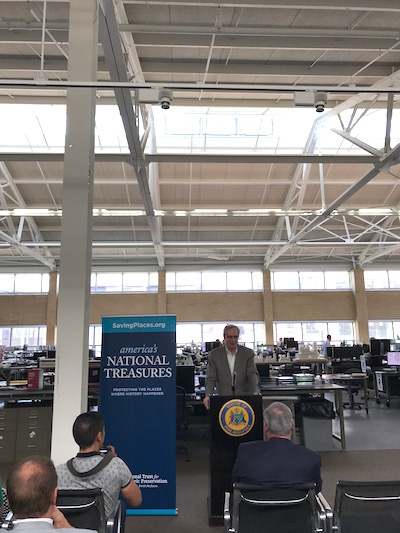 With his firm’s soaring studio as a backdrop, KieranTimberlake partner Stephen Kieran explains the benefits his firm got from adapting the former Ortlieb’s bottling house for its use. | Photo: Sandy Smith

One of those projects was the setting for today’s announcement. KieranTimberlake converted the Ortlieb brewery’s 1948 bottling house on North American Street in Northern Liberties into a soaring, open workplace for the firm’s 130 architects and designers in 2016, a project that won the firm a Grand Jury Award from the Preservation Alliance this year. Partner and host Stephen Kieran noted that the building, one of the few industrial buildings still standing in Northern Liberties, proved to be an ideal setting for world-class 21st-century design.

In her remarks, Meeks noted that “many of your historic neighborhoods are threatened by demolition pressure or incompatible new construction, and this can erode quality of life and erase what makes neighborhoods special.” She also bolstered the economic case for preservation with some statistics from the National Trust’s recently released Atlas of ReUrbanism, a block-by-block analysis of the economic performance of neighborhoods in 50 cities, including Philadelphia.

“What we found here and all across America is that neighborhoods that keep their older, smaller buildings tend to perform better in many respects,” she said. “They tend to be more densely populated, and that is an indicator of a neighborhood’s success. They also tend to have more new businesses, small businesses, and women- and minority-owned businesses. In fact, Philly’s older neighborhoods have more than twice the population density,  number of women- and minority-owned businesses, and jobs than areas with just newer buildings.”

“Development is a good thing. It creates good paying jobs and it creates homes and offices for residents and for businesses,” Kenney said. “At the same time, it can also create pressure on our historic resources. So the question facing us now is, How do we incentivize adaptive reuse so that it is the right choice financially as well as historically?”

The National Trust will work in partnership with both the Preservation Alliance and the Kenney administration on the city’s recently formed Historic Preservation Task Force. Kenney also announced that the Philadelphia Historical Commission would get additional staff members this year so it can deal more expeditiously with a growing tide of requests for historic designation of buildings and districts.

Steinke noted that Philadelphia was a pioneer in historic preservation: the Historical Commission, established in 1955, was the first in any American city to have jurisdiction over historic structures citywide.

Dominique Hawkins, the new vice chair of the task force, said that the body was “desperately needed. Although the commission has functioned well in its current capacity for a long time, there’s a lot of the city that does not share in the benefits of preservation.” The task force’s goal, she said, was to make sure that residents citywide “enjoyed the same benefits Center City neighborhoods have enjoyed in preserving the character of their place.”

The support of the National Trust and the Preservation Alliance will help the task force achieve that goal, she continued, but “it can only be the city’s plan if the city participates.”

“We do hope the public will be willing and able to participate in every step of the way in this important process,” Steinke concluded. “We believe it will have deep and lasting impact on this most historic city in America.”