A Walk Around Philadelphia – Literally

Four artists decide to take a hike along all 102 miles of the Philadelphia city boundary. Getting there, they found out, was more than half the fun. Can you tell where Philadelphia ends and the suburbs begin without a sign to tell you?

For most of their 102-mile walk along the Philadelphia city line, writer Ann De Forest, theater director Adrienne Mackey, and photographer JJ Tiziou couldn’t either. But aside from finding a border that wasn’t, the group found the trek itself as fascinating as anything they saw along the way.

And they did find some interesting things along the way.

The trio came to plan their trip through Mackey’s company, Swim Pony Performing Arts. The company, which specializes in performance art that draws on multiple talent streams, also sponsors a residency designed to do the same thing called “Cross Pollination.” Funded by a Knight Arts Challenge grant from the Knight Foundation, with additional funding from the Wyncote Foundation, the residency brought together a series of groups of three artists who normally would not collaborate to explore the processes by which ideas turn into art.

A hike certainly falls into that category. It arose from a common interest de Forest and Tiziou shared with Mackey, which they began discussing shortly after the first two were selected for the residency program.

“We were interested in maps and the identity of seeing things,” said Mackey. As the residency week approached, the three discussed all sorts of things they could do: “We talked about interests: borders, neighborhoods, game-playing, elaborate oral histories, urban explorations, stuff that was bigger than we could do in a week,” said Tiziou. Then they hit upon walking as an act that could tie some of those interests together. “Why don’t we just spend the week walking around the perimeter of the city? It seemed like an achievable goal.”

So off they went, with Mackey’s assistant, Swim Pony artistic associate Samantha Wend, along for the trip. Like Lewis and Clark, they were on a voyage of discovery, but they were not setting out to discover anything in particular.

“We went into this with the attitude of not knowing what to expect even though there were places on the map we all knew,” said de Forest. “We went with the spirit of exploration and not having expectations.”

The walkers’ main goal was to keep walking until they had covered all 102 miles. This meant that the journey’s purpose was to keep moving: “It’s not like a tour where you stop and investigate,” said de Forest. “There were spots where we did stop and say we’d observe things, but most of the time, [the walk] was about the process of moving through space.”

Most of that space, it turns out, lies along a stream of some sort. “The biggest surprise was how much time we spent in nature,” she said. Besides the obvious border of the Delaware River, “two of the major borders of the city are creek beds” — Poquessing Creek forms a good portion of the city’s northernmost boundary with Bucks County, and most of its western one with Delaware County follows Cobbs Creek, which flows into Tinicum Marsh — “so we spent more time climbing up rocks and down embankments” than they had figured they would.

What also surprised de Forest was how ill-defined the border was. Even where it follows a street, as it does in much of the city’s northwest, the difference between one side and the other is not all that great.”I had expected there to be more contrast at the border between what was city and what wasn’t,” she said.

They did make some material and visual discoveries along the way, though. One of their big ones was an observation that many residents of outlying parts of the city already know, namely, that the symbolic representation of “Philadelphia” is highly focused on its historic center. “One of the things we discussed in the aftermath of the walk is how ‘centrist’ the marketing of the city is,” said Mackey. “The skyline is the symbol. Meanwhile, we were noticing this funny [phenomenon] of ‘everywhere we went was Philly.'” Mackey said that her growing up in a neighborhood on Chicago’s fringes gave her an appreciation for less well-defined spaces like the ones they traversed.

They also managed to find parts of the city that surprised them by their existence. For instance, Mackey said, they found “this crazy Russian nightclub” on the border in the Far Northeast and thus came across Philadelphia’s Russian enclave, with its spas and stores full of Russian foods. “I’d have never known to look for it,” she said.

While Tiziou said that “we discovered amazing things at every turn,” their biggest discovery was about the process of walking itself, which in retrospect made even the bad days good. “Walking in the ice and rain through an industrial landscape was fun,” he said.

For the group, what they found out about the act of walking overshadows what they found and saw on the trip. The walk also showed them that they didn’t really know the city they thought they knew. “I like to feel like I’m a Philadelphian, plugged in, and I know a lot of stuff,” Tiziou said. “This was a good reminder that I know nothing. There’s so much going on in this city. I may know two or three facets out of 10,000.”

And yet, Wend said, they get asked about the things they found and saw. “There’s so many, we have countless stories to talk about. It’s harder to recount the experience.”

The group will both tell some of those stories and recount the experience to the best of their ability tonight and May 6 from 6 to 8 p.m. at the Philadelphia History Museum at the Atwater Kent, 15 S. 7th St., where both they and the audience will have the visual aid of the museum’s large walkable map of the city to help them place their stories. The talks are free and open to the public, but pre-registration is required. You can still register for both tonight’s talk and the May 6 talk online. The photos below barely scratch the surface of what they saw.

A Walk Around Philadelphia 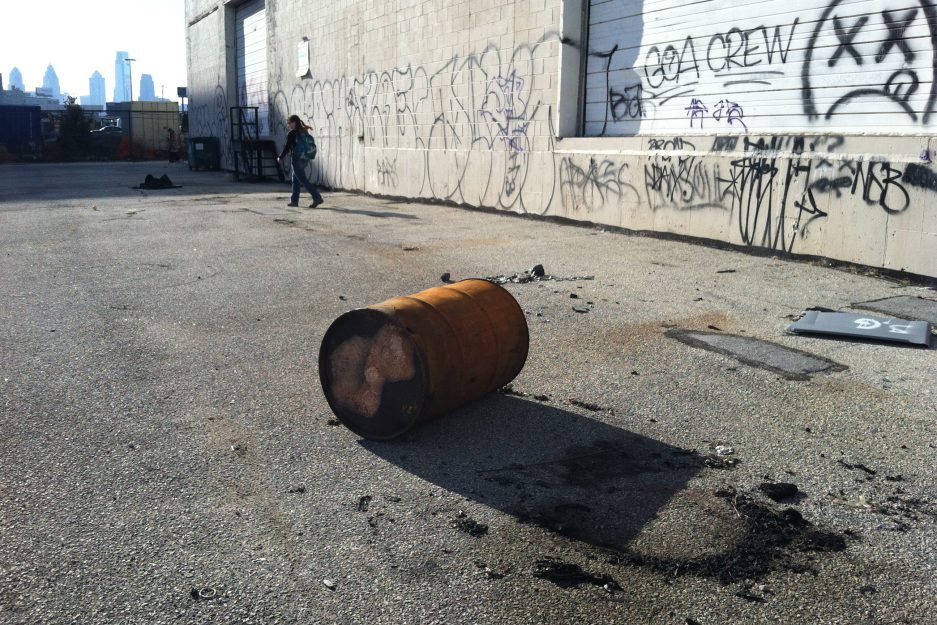 Along the Delaware | Ann de Forest 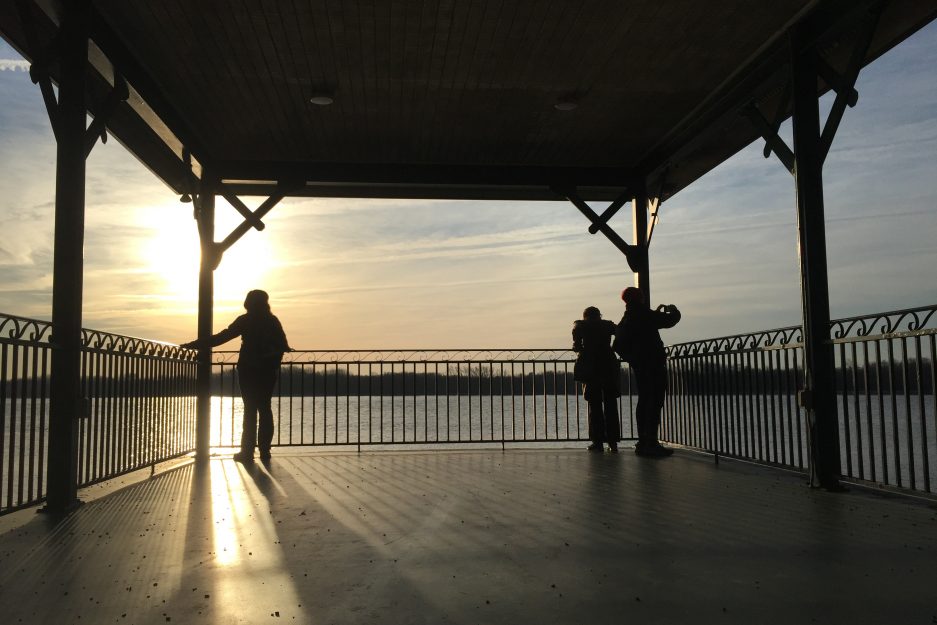 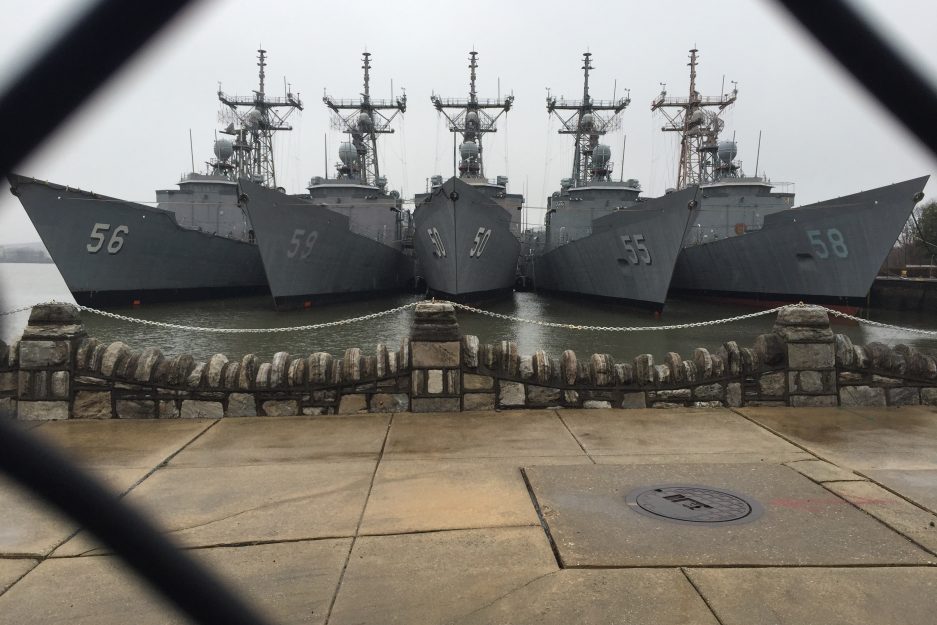