The developer wants to bring a 22-story Hyde Hotel and apartments to what is now a parking garage. Should we start calling South Broad Street the Avenue of the Hotels? Stop us if you’ve heard this one before: developer Carl Dranoff has big plans for a key corner of South Broad Street.

This time, Dranoff has his sights set on the other corner of Broad and Pine, specifically the northeastern quadrant that currently houses a Starbucks, Sumo Sushi and a dilapidated parking garage, for another SLS-branded project called the Hyde Hotel. It’s intended to be a “bookend” for the aforementioned SLS Lux, Dranoff told members of the Washington Square West Civic Association during an information-only presentation on Tuesday night.

Dranoff has once again partnered with sbe to create a 22-story mixed-use tower proposal featuring a ground floor restaurant, an underground parking garage, 76 hotel rooms and approximately 83 apartment units. It would all be topped by a separate restaurant on the roof deck located on the 23rd floor.

The garage is currently owned by the estate of Sam Rappaport, and Dranoff has a deal in place to purchase the property, said Peter Kelsen, zoning attorney for the project,

Dranoff told those gathered that he had been trying to buy this property for 13 years, and he expects closing to occur by June 1. Much like with the SLS Lux project, the partners will look to pursue legislative rezoning to up-zone it from CMX-4 to CMX-5, the latter would allow for a building of this proposed height and overall size.

The former would probably yield an “very insignificant” building in terms of size, similar to that of the adjacent Anderson Hall building, according to Kelsen. Dranoff quickly followed up by saying the project “wouldn’t be feasible” without the upgraded zoning, particularly due to the “hefty price” that the developer will pay to land the Rappaport-owned building. That price is unknown at this time.

Hyde Hotels are the mid-tier flag of SLS, and Dranoff compared them to a Kimpton or W. The idea isn’t to compete with the SLS Lux, but to provide a variety of options and price points.

The proposed tower would rise to 292-feet, with floors 5 through 10 housing the hotel rooms and 11 and above containing a mix of studio, 1- and 2-bedroom apartments. Michael Ytterberg, principal of BLTa, the architect on the project, said the building would fit into the context of the Philadelphia architectural landscape, ultimately deferring to the “iconic” designs of the much-taller and top-of-the-line SLS Lux up the street: “[The design of the Hyde Hotel] looks like a building that’s always been there.”

As such, early conceptual designs call for a slender tower composed of glazed, industrial-style windows, brick on the east and west, and topped with metal paneling. The L-shaped design will rise to the height of the adjacent Anderson Hall (roughly 9-stories) on South Broad Street, but taper in at the third floor to allow a sizable amount of space in order to preserve the light well. Though not utilized as a community space, a courtyard with a green roof would be visible from Anderson Hall.

From there, the northern side of the building becomes partitions of brick and metal panels separated by two glass shafts: one is a window for the studio units and the other a glass elevator to the roof top restaurant. 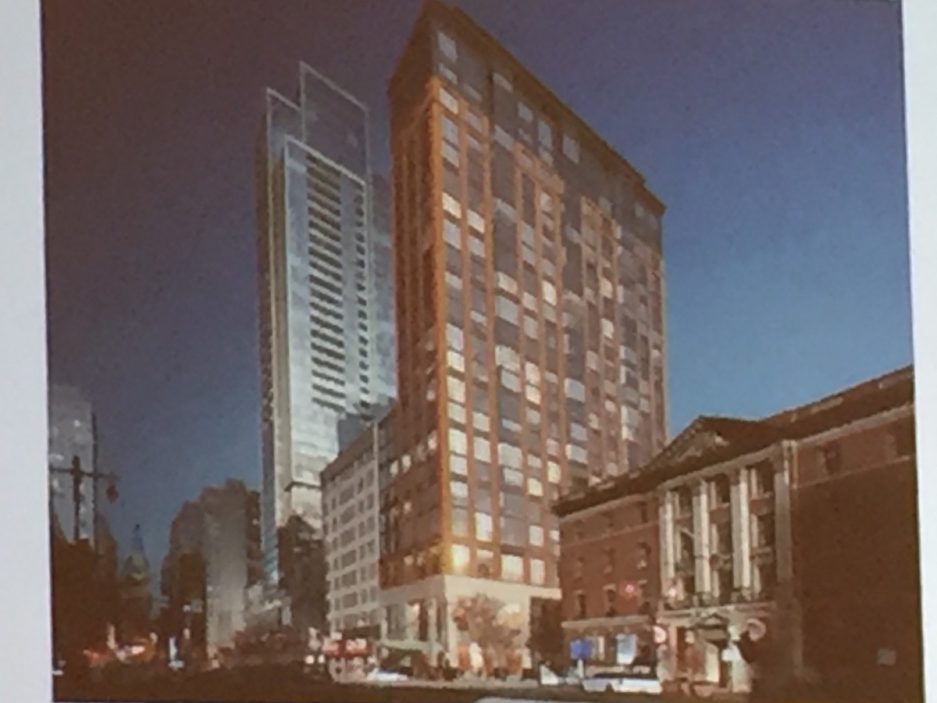 View looking northeast, note the SLS Lux at the left 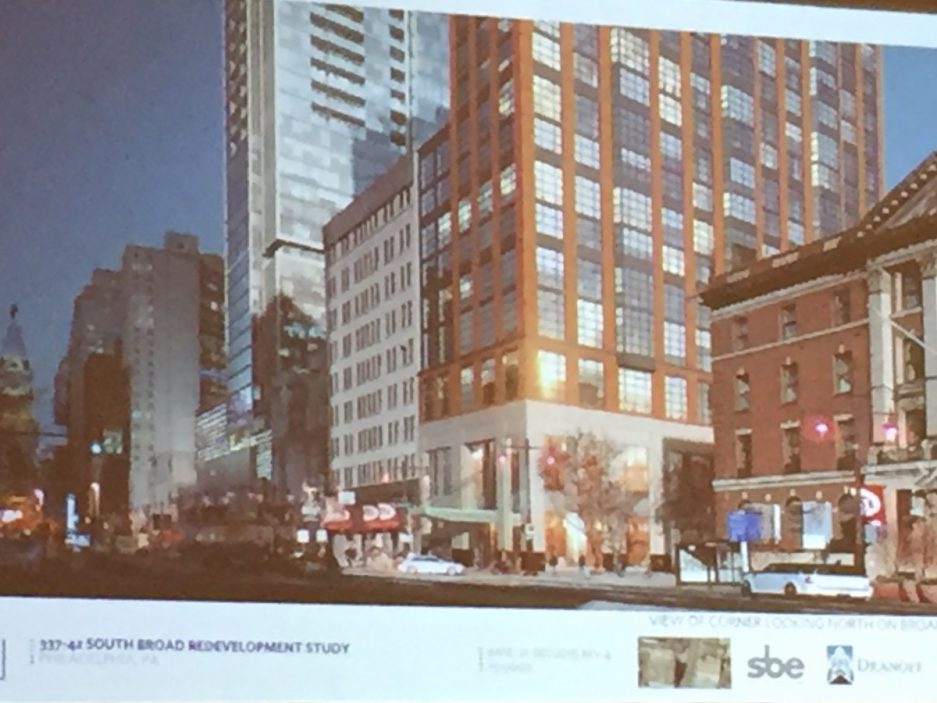 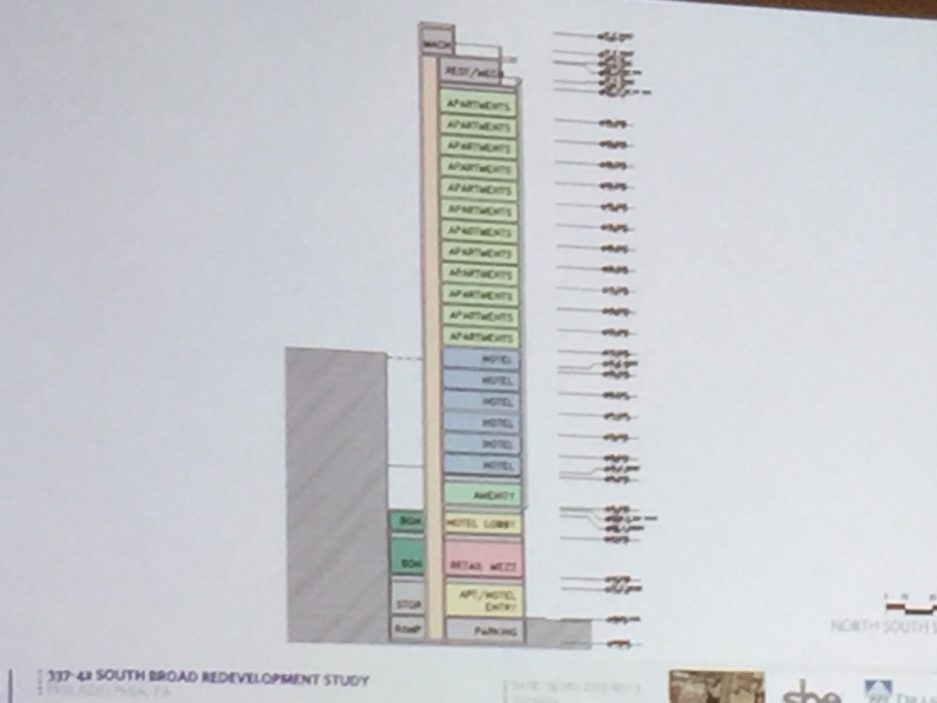 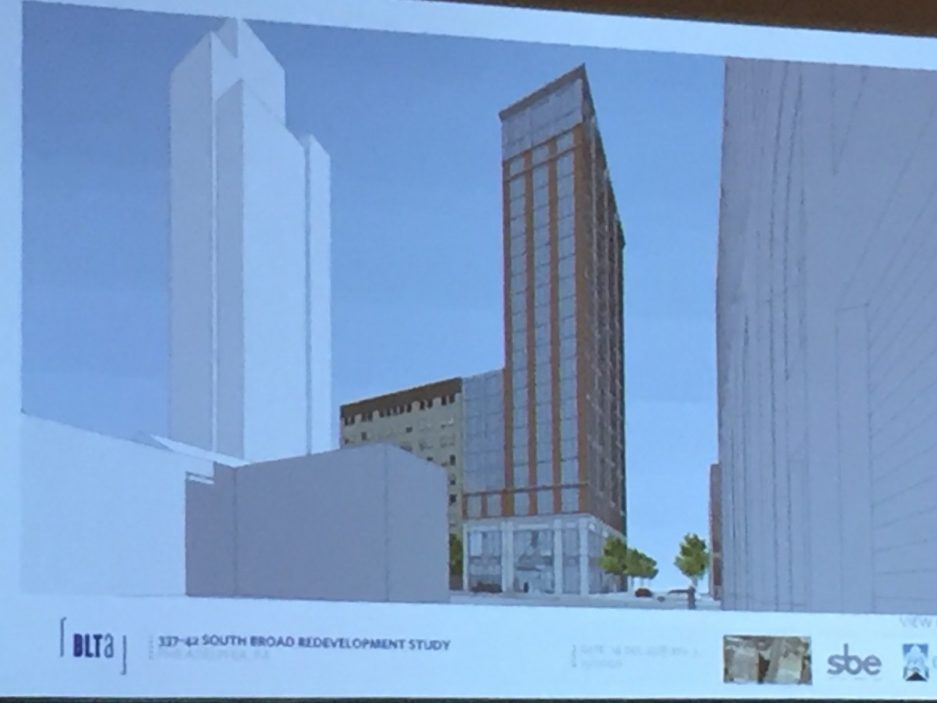 View looking east on Pine, SLS Lux to the left 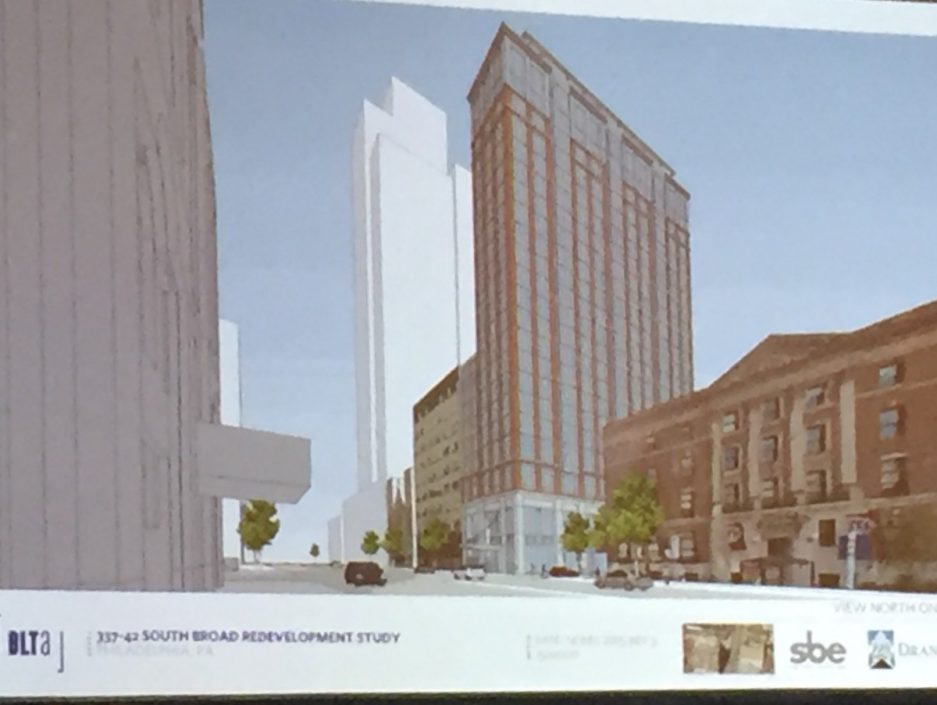 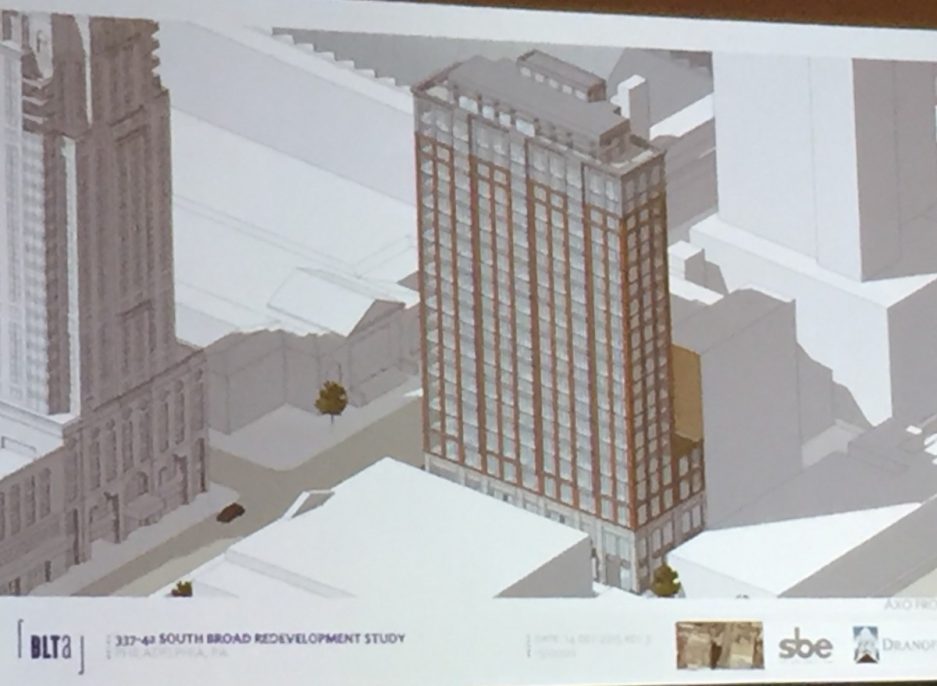 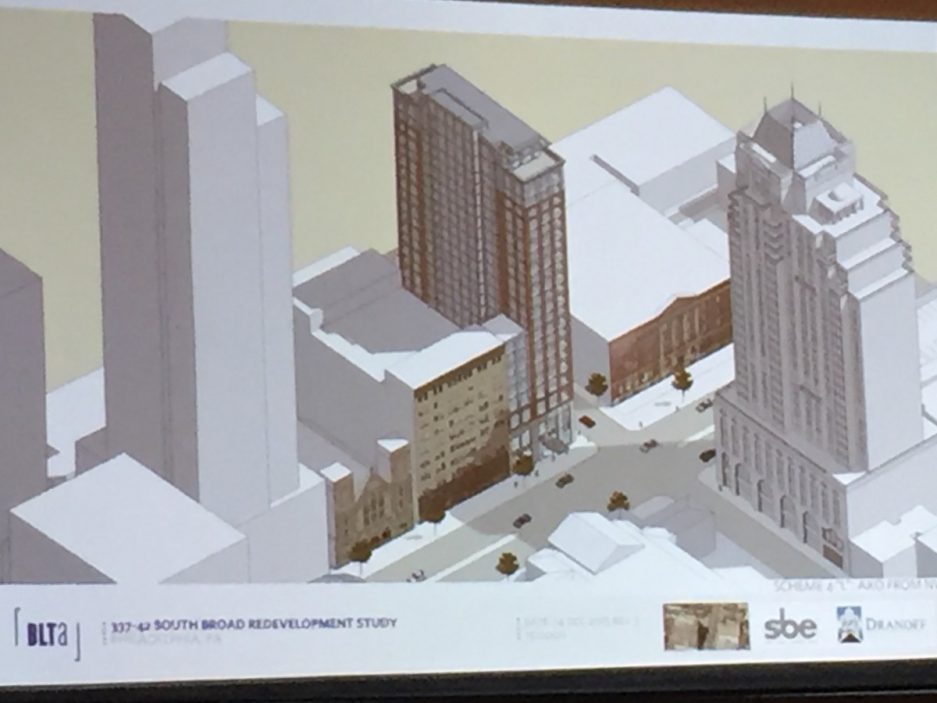 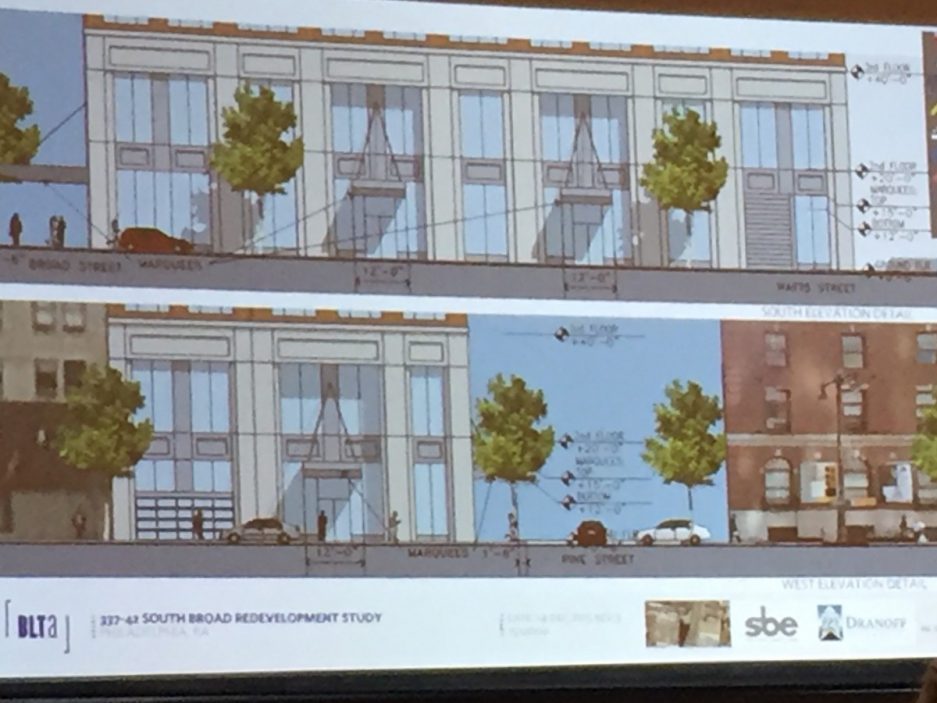 The information-only presentation marked the very beginning of the process, and Kelsen said they’ve had a “favorable response” from the Philadelphia City Planning Commission (PCPC). He also noted that, although they don’t have any legislation introduced at this time, the PCPC also wanted to see the project done through legislative rezoning.

If all goes according to plan, Kelsen said that construction could start in early 2017. A 20-month construction timeline would put the opening of the new Hyde Hotel/apartments at some point in 2018.

Though there were some concerns about parking (not necessarily regarding this project, but in the neighborhood, which is seemingly losing public parking by the day), WSWCA board members noted that the time frame is essentially the same as the SLS Lux. That site is currently a massive hole in the ground and has since been delayed due to the state budget saga (the project received public subsidies), according to Kelsen. They asked that pedestrian access and traffic management be a top priority, especially with dueling construction sites at the top and bottom of the block. “It’s fair to say, that Mayor-elect Kenney has a very defined view of pedestrian access … much more user-friendly,” said Kelsen, of the incoming mayor.

Plans for additional parking are still being fleshed out, but Kelsen said that Symphony House has an excess amount of parking, and the building could end up using that garage as part of their planned valet programs.

Dranoff, who lives across the street, assured the folks in attendance that pedestrian access will be an important element: “I will say that I use that sidewalk everyday, so I will make sure that it will be as good as it can possibly be.”

A previous version of this post labeled the building adjacent to the proposed hotel as the Hamilton Building, as referenced at the meeting. It has since been updated to reflect that the building is actually Anderson Hall.