Philly Today: Let Us Now Welcome the Migrants Texas Just Sent Us on a Bus

Here's how you can help the city's surprise new residents. Plus, big changes for Philly restaurants, and the Larry Krasner impeachment effort marches on. 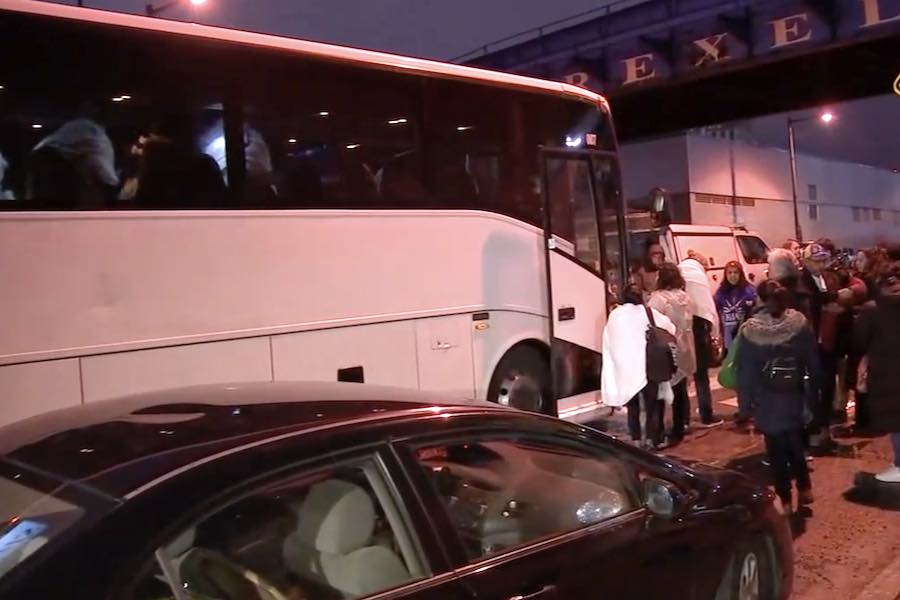 It’s official. Texas governor Greg Abbott — a fun-loving guy who once fought for a ban on the sale of sex toys in the state — has added Philadelphia to the list of cities where he will bus migrants who have come to his state. And that bus has arrived.

“Since April, Texas’ busing strategy has successfully provided much-needed relief to our border communities overwhelmed by the historic influx of migrants caused by President Biden’s reckless open border policies,” Abbott said in a statement earlier this week. “Until the Biden Administration does its job and provides Texans and the American people with sustainable border security, Texas will continue doing more than any other state in the nation’s history to defend against an invasion along the border, including adding more sanctuary cities like Philadelphia as drop-off locations for our busing strategy.”

The city says Texas didn’t even have the decency to let us know the bus was coming. According to the city, officials only found out via a tip from the community organization New Sanctuary Movement of Philadelphia. And Abbott didn’t confirm the information until the bus was about to arrive.

“As a proud welcoming city, we will greet our newly arrived neighbors with dignity and respect,” Philadelphia Mayor Jim Kenney said in a statement. “Philadelphians know that diversity is our strength, and we want to acknowledge the generosity and compassion we have already seen from residents and community partners since we were alerted to a possible bus arriving in Philadelphia.”

Then he delivered some harsh words to Abbott:

“It is truly disgusting to hear today that Governor Abbott and his administration continue to implement their purposefully cruel policy using immigrant families — including women and children — as pawns to shamelessly push his warped political agenda. Sadly, racism and human cruelty have historically been intertwined in how immigrants are received by and within this country, something the previous presidential administration openly and actively encouraged. Since this disturbing policy of busing immigrants in an uncoordinated way began occurring without warning in other cities, various City agencies have been arduously working with our community partners to ready the city to receive these individuals.”

A bus of 38 migrants has arrived from Texas in Philadelphia this morning. The group was met by volunteers and city workers with coats, blankets, and hot chocolate. The group has been transferred to a SEPTA bus for now pic.twitter.com/yZVWrxE578

Bus from Texas with migrants seeking asylum has arrived to Philadelphia. pic.twitter.com/HdmvHm3EXs

So what do we do now that the migrants are in Philadelphia? The city has set up the Philadelphia Welcoming Fund, which it says will support “local efforts to welcome immigrants, refugees and asylum seekers arriving to Philadelphia.” You can donate to that here.

But if you don’t trust the city with your money you can reach out directly to community organizations like New Sanctuary Movement to see how you can help, monetarily or otherwise. The city says it is unable to accept donations of physical goods at this time.

Thanks to the extensive Philadelphia Marathon road closures, Center City is the last place you want to be with a car this weekend. There are also parking restrictions.

The city is closing these areas:

Like I said, go elsewhere. Or take a train.

About That Larry Krasner Impeachment…

We’ll have more on the Krasner impeachment for you very soon. Stay tuned.

Many, many restaurants are pissed the hell off now that Philadelphia is changing its outdoor dining regulations, rendering many of the streeteries — at least as they have existed since they emerged during COVID-19 — illegal. The application process for the new licenses opened on Tuesday. And the city says all streeteries must be fully licensed by January 9th. That’s not a lot of time.

And From the Ho-Hum Sports Desk …

Nick Sirianni says his Eagles played like crap on Monday night… good luck finding anyone willing to argue that. https://t.co/0aJ0tihii9

On a tangentially sports-related note, John and Gisele Fetterman dressed up nice for a visit to his new office. (Hey, he played college football for Albright!)

The DNC thought gay guys were gonna love Pete and Chasten, when in reality this is the joint slay we were looking for https://t.co/3EqHzBfbFb

Remember the Phillies? Some people apparently think manager Rob Thomson did a better job this season than you do.

In college hoops, the Penn Quakers faced off against the Drexel Dragons in men’s basketball, and Penn pulled out the win, 64-59.

The Vanderbilt Commodores traveled to Temple, with the Owls hot off their big win on Friday against Villanova, and pulled out a close game in overtime, 89-87. On the plus side, Damian Dunn notched a career high:

Damian Dunn’s 38 points are the most in Temple history since new Temple Athletics Hall of Famer David Hawkins’ 41 in 2004.

Just in case you, like me, happen to be a Ben Simmons hater, it was extremely pleasant to watch the Brooklyn Nets lose to the Sacramento Nets last night by a score of 153-121.

There’s nothing on the agenda for tonight.