Philly Today: Phillies and Eagles and Sixers and Union and Man This Is Exhausting

The Phillies came this close; the Eagles went where no Eagles have gone before. The Union got good news. The Sixers got bad news. OK, and a little non-sports stuff, too. 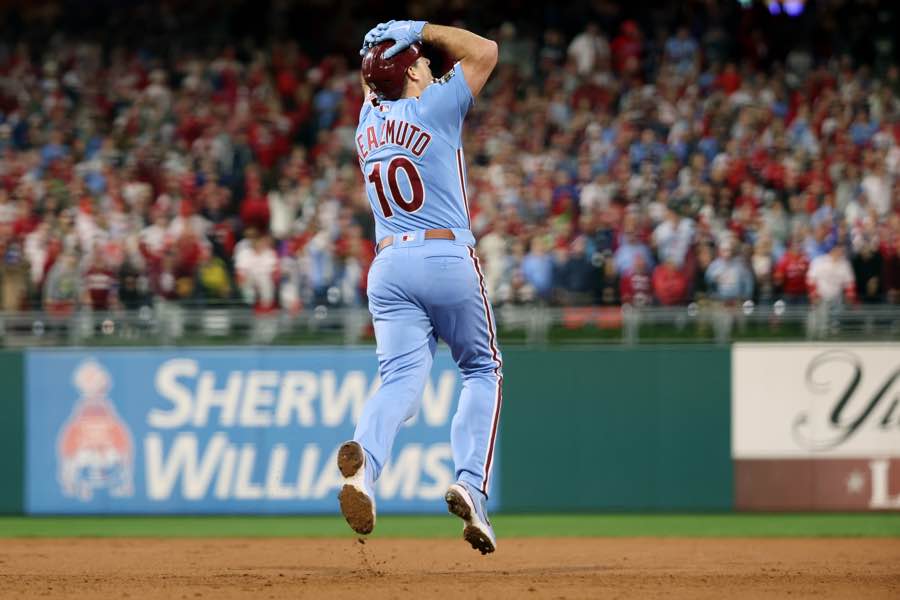 Phillies catcher J.T. Realmuto was all of us in his reaction to Chas McCormick catching his fly ball against the outfield wall in the ninth inning last night. (Photo by Mary DeCicco/MLB Photos via Getty Images)

A Report From the Politics Desk

My valued colleague Victor Fiorillo left me in charge of Philly Today today — something about going deer-hunting with his kid and a bow and arrow? — and I promised him I’d put in something that wasn’t about sports.

So here you go. The only thing Rick Santorum and I have ever agreed on: Doug Mastriano is not good. Oh, and I’ve got one more for you: Oprah Winfrey, initial enabler of the empty vessel that is Mehmet Oz, finally came out and disavowed the creature she created, as reported by former Philly Mag ace Holly Otterbein at Politico. Now, on to sports!

A Report From the Desk of Mixed Bags

So we had the undefeated Eagles playing the Houston Texans (man, there are some dumb team names, aren’t there?) last night at NRG Stadium, “the only rodeo and NFL indoor/outdoor retractable roof stadium.” Yeah, that’s a lot of qualifiers, son. The Texans’ record this season: 1-5-1. That last was a tie, in overtime against the Colts. Game time was 8:15, which was very inconVEEEnient for Phillies fans, since their crucial World Series Game 5 began at 8:03. What to do, what to do? Toggle, of course.

That could prove challenging, since the city seemed a little, um, overwhelmed with all that’s been happening sportswise — or maybe just under-rested? At least reliever José Alvarado was staying loose.

A lovely afternoon for a bike ride in South Philly.

Still, down at the Bank, fans were doing their best to, uh, gear up.

And speaking of fans, the Astros’ 5-0 no-hitter of the Phils on Wednesday was a night to remember for 19-year-old Luke Theodosiades of Ridley Township, at least. Why? He threw out the first pitch as part of the league’s Stand Up to Cancer night. And Havertown third-grader Dean Hoing has been going around impersonating Bryce Harper. Isn’t that illegal? Nah!

So what happened with the Iggles? Though the Texans scored handily on the initial drive of the game and the teams were tied 14-14 at the half, Philly prevailed precariously, 29-17, settling down in the second half thanks to a massive interception by C.J. Gardner-Johnson (who now leads the whole league in that category with five), the accustomed stellar play of quarterback Jalen Hurts, and monster nights from Miles Sanders and Dallas Goedert. The Birds are an unprecedented 8-0! Woo-hoo-hoo!

And the Phillies? Well … it was close all along. But they never quite got it all together despite Kyle Schwarber’s exciting first-inning solo homer to tie the game up. A lot of fans knew where to pin the blame:

Did I mention the Fightin’s had a lot of chances?

The Phillies have stranded 9 runners tonight. They’re 0-for-4 with runners in scoring position and 1-for-9 with men on base.

Brandon Marsh somehow looks like he hasn’t showered in days but also just took a shower at the same time. It makes no sense.

In the bottom of the ninth, with the Phils trailing 3-2, Rhys Hoskins struck out, and J.T. Realmuto then hit a ball that missed a homer by two scant feet and was hauled in by Effing Chas McCormick, who’s from hereabouts but better not ever show up again. Bryce Harper promptly got hit by a pitch, bringing up Nick Castellanos, who had seemed to be improving through the course of this series. He ground out to end the game.

Hey, it’s not over till it’s over, people! You gotta believe! Back to Houston we go.

Today also brought bad news for the Sixers, who play the Knicks tonight at 7 at the Wells Fargo Center: James Harden suffered a foot tendon strain in Monday’s loss to the Wizards and could miss as much as a month, which adds up to 16 games. Add to that loss All-Star Joel Embiid, who’s been out for three games with the flu and a knee injury, and injuries to De’Anthony Melton and Matisse Thybulle.

There was good news from the Union, however, who play on Saturday at four o’clock in Los Angeles for the MLS Cup championship: Four players — MLS Goalkeeper of the Year Andre Blake, Defender of the Year Jakob Glesnes, midfielder Dániel Gazdag and defender Kai Wagner — were named to the league’s Best XI of the season.

Today’s a travel day for the Phils, who’ll meet the Astros again in Houston on Saturday at — all together now — 8:03.