The Astros have been unbeatable all post-season. But any doubts about whether the Phils belong in the same class were quickly quashed. 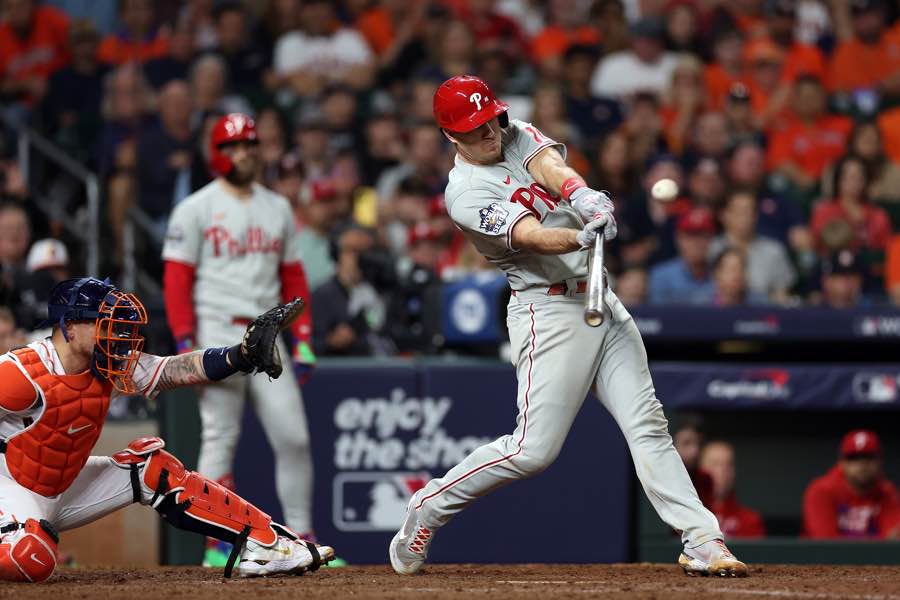 What a game! I mean, we didn’t have the best feeling going into this, given the teams’ recent history. The last time they faced off, it was just ugly. Ugly.

Then Tyrese Maxey went and dropped 44 points — with 8 rebounds and 9 threes — to lead the Sixers to a convincing 112-90 win over the Raptors in Toronto. UNBELIEVABLE!

Okay. That was a nice return to form for the Sixers — and, with Joel Embiid out, further proof that Maxey is indeed the key to their success — but it’s definitely not the game you’re here to read about.

We’ll admit that we didn’t have the best feeling going into this game one of the World Series, given the Phillies’ and Astros’ recent history. Sure, Aaron Nola shut them down in the first game of their regular season-closing series to punch the Fightins’ ticket to the playoffs. But then they were nearly no-hit by Justin Verlander and co. the following day. (They were certainly all hung over, but still.) And, look, the Astros are a juggernaut, one that hadn’t lost in nearly a month.

So when Future Hall of Famer™ Verlander put the Phils down in order over the first three innings as his batsmen put up five on Nola, it felt very much like a matchup between a 106-win team that breezed through the regular season and an 87-win crew that stumbled and backslid into the playoffs. The Phils’ hitters looked overmatched. Nola didn’t have his good stuff. Down 5-0 after three is not where anyone in the visitors’ dugout wanted to be. There was no joy in Philsville. 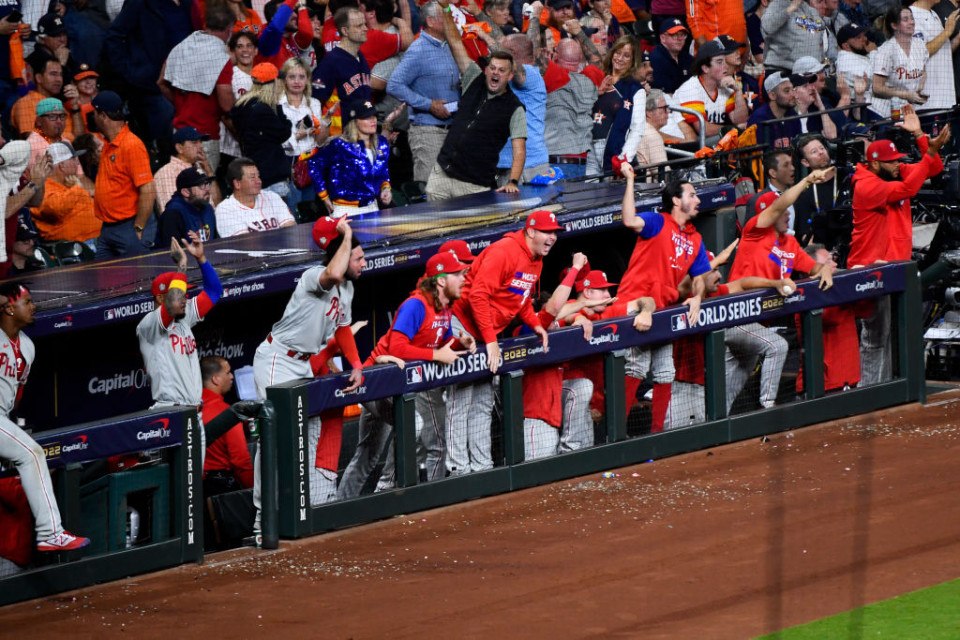 The Phillies cheer from the dugout. / Photo by Logan Riely/MLB Photos via Getty Images

The Phillies put up three runs with an everybody-hits (woo-hoo!) two-out rally in the fourth that essentially doubled Verlander’s pitch count. And, crucially, heroically, Nola summoned the will to shut the ’Stros down in the fourth. The Phillies then tied it up in the fifth on a J.T. Realmuto double, chasing the Future Hall of Famer after 5. (Verlander now, for the moment at least, owns the worst World Series ERA in baseball history.) And suddenly, this team — THIS. FREAKING. TEAM. — looked every bit like it belonged on this stage.

And tied at five is where the game stayed as the bullpens traded white-knuckle innings into extras. At which point J.T. Realmuto launched a singleton home run into the right field stands in the top of the 10th to give the Phillies their first World Series lead since game 5 of the 2009 World Series. (Fun fact, this was the fifth straight extra innings post-season game between the Phillies and Astros, going back to their epic 1980 National League Championship Series.)

And then, having spent their very best relief pitchers earlier in the game, the Phils had to call on David Robertson to close it out. On the plus side, Robertson has World Series experience from his time with the Yankees. On the minus side, that experience was in 2009, against the Phillies. Yes, Robertson is old. He’s the guy who hurt himself jumping up to celebrate a Bryce Harper home run earlier in the postseason.  His 10th inning featured numerous Astros high-jinx: 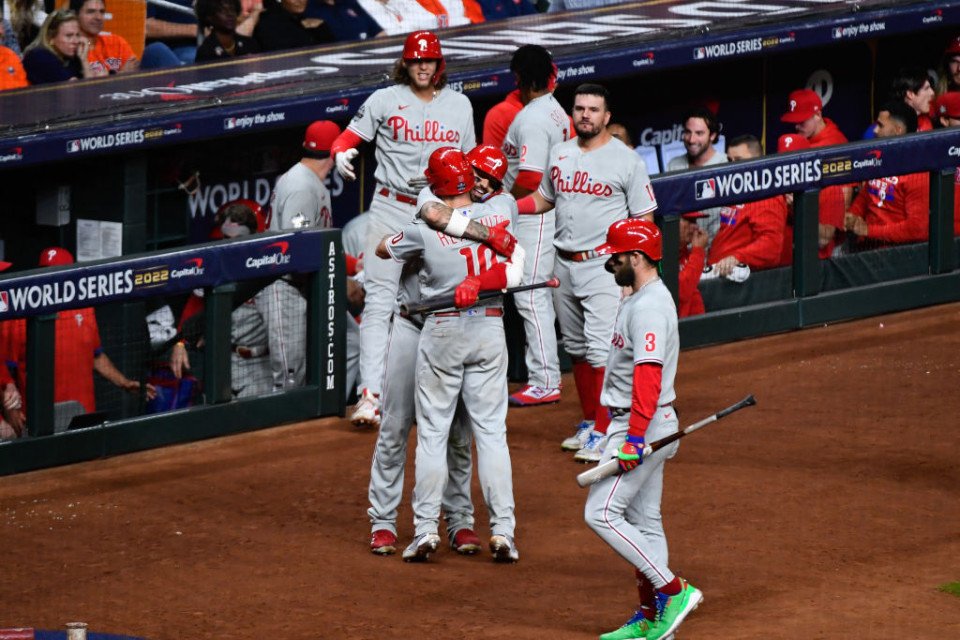 J.T. Realmuto hugs Nick Castellanos after hitting a home run in the 10th inning to take the lead during Game 1 of the World Series between the Phillies and the Astros in Houston. / Photograph by Logan Riely/MLB Photos via Getty Images

The Phillies stole a game on the road! Again! Apparently the last time a team came back from a 5-0 hole to win a World Series game was in 2002 when the Giants blew it against the Angels. (Those Giants were managed by Dusty Baker, now manager of these Astros.) And just like that, the Phillies proved that their run through October has been no fluke, that despite the hinky path they took to get here, they absolutely belong in this series with this heretofore unbeatable team.

Kyle schwarber hearing that he can get free tacos for America if he steals a base pic.twitter.com/jqfiKmjvvq

After that foul tip Realmuto took to the face, that must've felt *great*

Catchers to hit a #WorldSeries home run in extra innings since 1903: 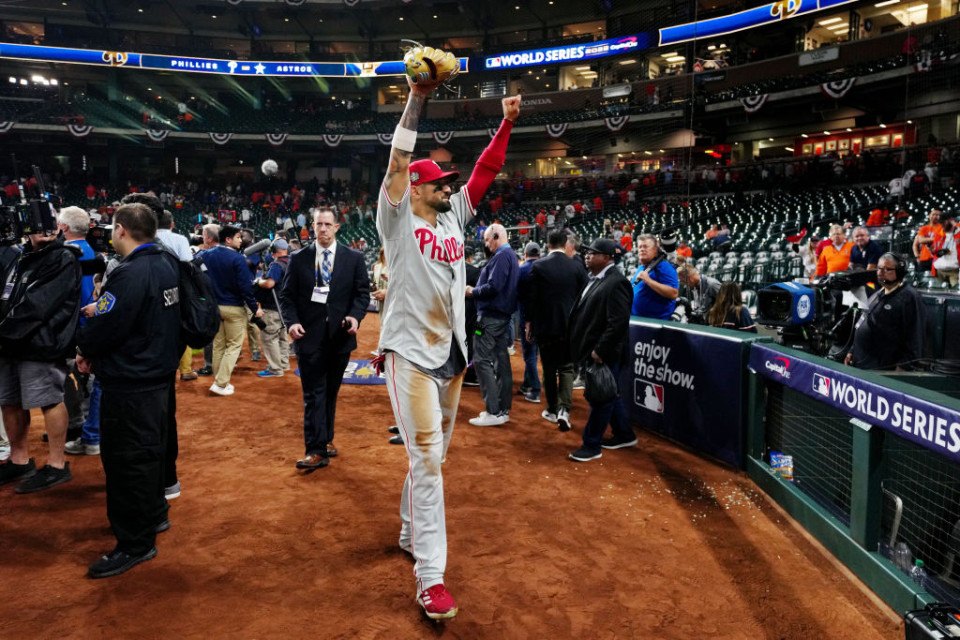 Nick Castellanos waves to the crowd as he enters the dugout after the Phillies defeated the Astros in Game 1 of the 2022 World Series at Minute Maid Park on Friday, October 28, 2022 in Houston, Texas. / Photograph by Daniel Shirey/MLB Photos via Getty Images

Okay, everyone! Game two is tonight. 8:03. Zack Wheeler on the hill. Let’s do everything exactly the same as yesterday. I’ll be wearing my lucky underwear and GoPuffing ice cream sandwiches and Utz chips at 7:45. You do you.

Everything you need to know about the World Series is here. The joy continues for another day! Remember: Don’t climb the poles! 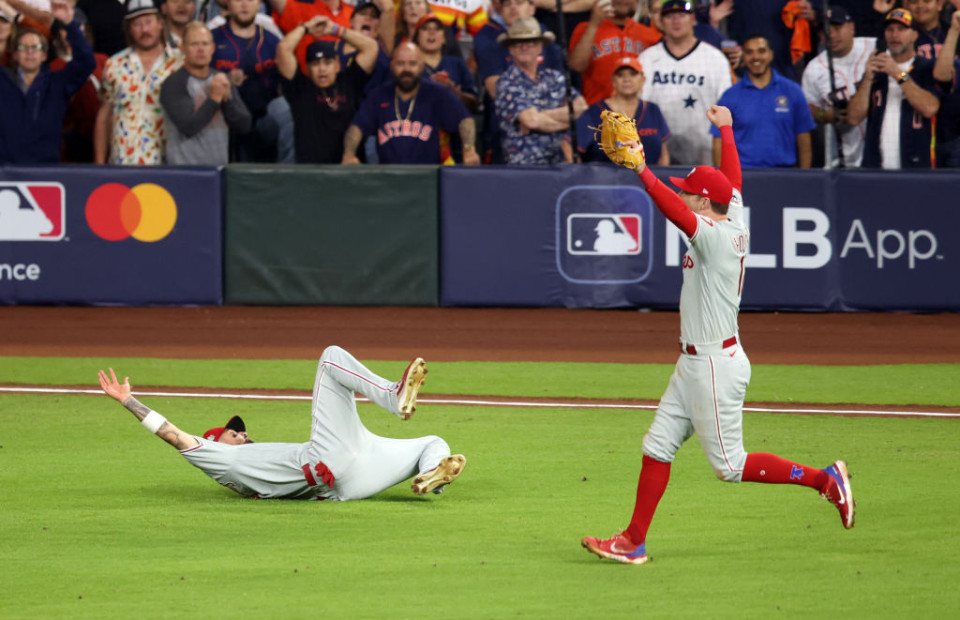 Rhys Hoskins celebrates as Nick Castellanos makes a diving catch to end the ninth inning of Game 1 of the 2022 World Series between the Philadelphia Phillies and the Houston Astros at Minute Maid Park on Friday, October 28, 2022 in Houston, Texas. / Photograph by Rob Tringali/MLB Photos via Getty Images