Philly Today: The Herr’s Philly Potato Chip Contest Is Back, With a Twist 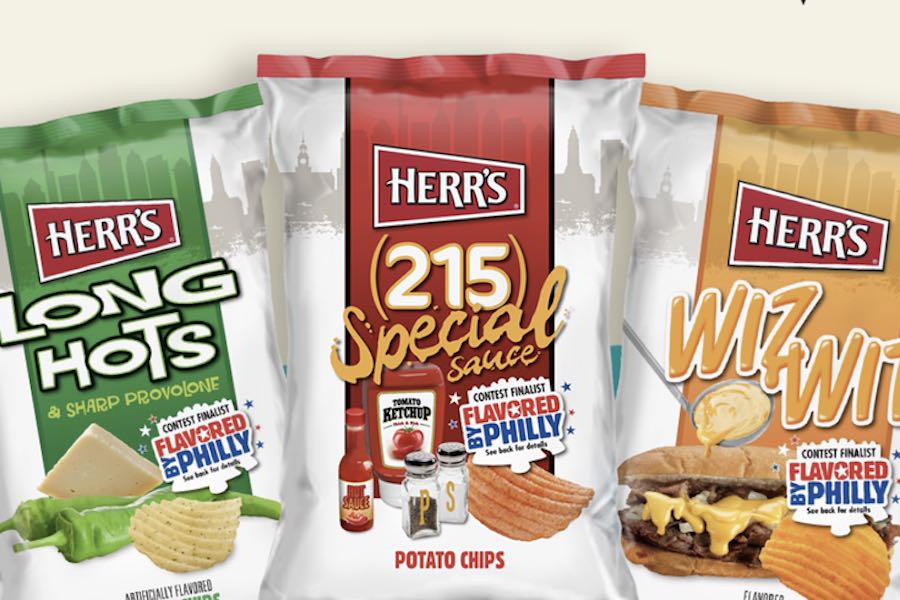 Remember the Herr’s contest to create a Philly potato chip? The one that recently brought us Long Hots & Sharp Provolone, 215 Special Sauce and Wiz Wit potato chips? Well, the contest is back. This time, there’s a bit of a twist.

The idea is that you nominate a potato chip that is inspired by a small food business in Philadelphia.

Maybe you love Nick’s Roast Beef (the original in South Philly, of course, not the unrelated imposter in Old City), so you could suggest as a flavor — and I’m just spitballing here — The Herr’s Big Beef. What about a cheesy potato chip that is twice as big as other potato chips and extra greasy? Yes, the Herr’s Lorenzo. Wait. Maybe what the world really needs is the Herr’s Juana Birria, a cannabis-scented tribute to the Best of Philly-winning birria at Juana Tamale in South Philly. I do love the baked clams at Delco’s Clam Tavern. Would people go for clammy potato chips?

Herr’s just started accepting submissions and will do so through November 15th.

Wednesday was yet another bad day for Larry Krasner, the embattled district attorney of Philadelphia.

Republican state representative Martina White (whose 170th District covers much of far Northeast Philly) officially introduced articles of impeachment against him yesterday, just after the Republican-led committee in Harrisburg that’s been investigating Krasner issued a scathing 63-page report. The TLDR version: Krasner is to blame for the surging crime numbers.

“The city of Philadelphia cannot afford to wait any longer for us to take action on what we already know to be true: that Krasner is responsible for the rise in crime across our city due to his dereliction of duty to prosecute the guilty and to protect the innocent,” said White on Wednesday during a press conference.

Anytime somebody uses the phrase “dereliction of duty,” you know things are getting serious.

White’s resolution is quite a read. Here it is in its entirety:

So does this mean Krasner is out of a job? Far from it.

For that to happen, the Republican-controlled House has to vote to impeach him. That could quite possibly happen. Then the matter would move over to the Pennsylvania Senate (also Republican controlled), which would conduct a trial.

Krasner has said the whole thing is a politically-motivated sham, and supporters jumped to his defense. In a joint statement, City Councilmembers Kendra Brooks, Jamie Gauthier and Helen Gym denounced the move as a “direct threat to the integrity of our democracy.”

“As women of color, we are no strangers to outsiders attempting to dismiss the power of our voices and the validity of our votes,” the statement went on to say. “Communities like ours have faced generations of disenfranchisement while politicians at all levels use our pain for political theater.”

Why have one Bryce Harper mural in South Philly when you can have two?

Like you, he knows Trader Joe’s is the best.

And from the Oh-Bloody-Hell Sports Desk …

You want to talk Sixers? Sigh. Turns out that murder of crows across the street last night was right. Things started out fine in Toronto against the Pacers, with Joel Embiid looking strong and hitting an early three. Then things went downhill, turnovers ensued, and we were down 10 at the half, 63-53. For once, the team had a bit of a comeback in the third, the dangerous third, but the whole team just looked out of synch. Embiid was dragging his ass. Alaa Abdelnaby helpfully mentioned that the last time they played here, the Sixers won by 35. Great.

The exceptions to the general misery: Maxey and Embiid each had 31 points. Low points: Tobias Harris had three. And the team had 12 turnovers. The Sixers go down 119-109. They’re now 1-4 on the young season.

Thank God we have baseball. And now, it’s official: Aaron Nola will be the Phils’ starting pitcher for Game 1, with Zack Wheeler on deck for Game 2. Over at the Inquirer, Amy S. Rosenberg celebrated the Philly Phanatic with a compilation of his career highlights. (She’s wrong about Gritty, though.) Which reminded us of that time Jezebel asked women everywhere: Would you have sex with the Phillie Phanatic?

Here’s a startling report from the Associated Press: Neither World Series team this year will feature a single U.S.-born Black player on its roster. Black players now make up 7.2 percent of opening-day rosters, down from 18 percent in 1991. BUT! In last summer’s draft, four of the top five players chosen were Black. Just for comparison’s sake, in the NBA last season, 73 percent of players in 2021 were Black. And in the NFL? 58 percent.

Oh, and should you be a complete and utter sucker, Topps, the baseball-card company acquired this year by former Sixers part-owner Michael G. Rubin‘s Fanatics, is shilling a collection of MLB post-season NFT “digital collectibles.” Sample here. Hey, it’s your money.

The Flyers have a game tonight. The Nets lost last night. Kyrie Irving had a message for teammate Ben Simmons:

Kyrie yelling at Ben Simmons to shoot it right under the basket is peak comedy lmao pic.twitter.com/rC5vRYzwdW