Philly Today: Dr. Oz Has a Google Problem, But John Fetterman Might Be a Slacker

Plus, "Snow? What snow?" Stu Bykofsky's lawsuit against the Inquirer moves forward. And more of what the city is talking about right now. 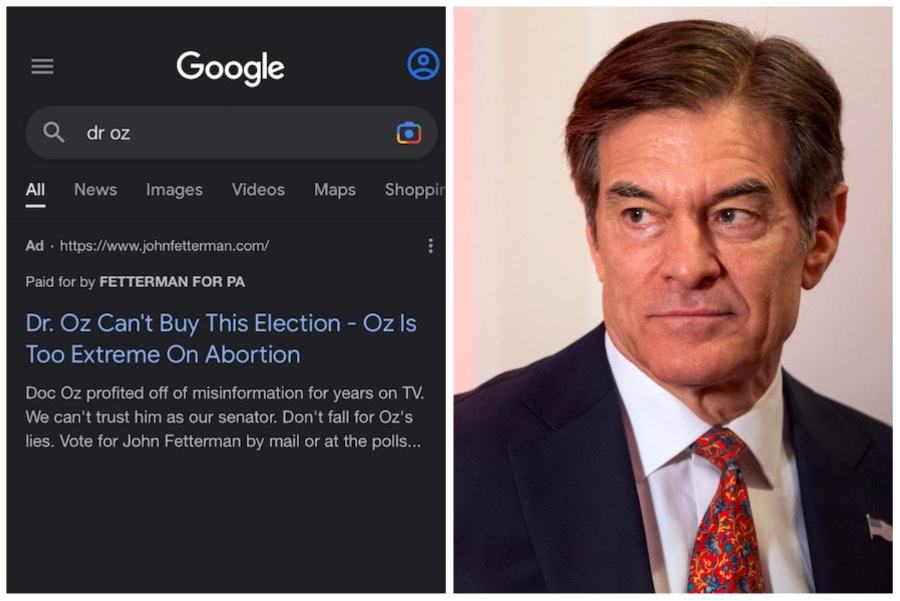 em>Check phillymag.com each morning for the latest edition of Philly Today. And if you have a news tip for our hardworking reporters, please send it here.

Dr. Oz Has a Google Problem

Much has been written about how the Dr. Oz-John Fetterman race has been playing out on social media. (Hell, the Washington Post did a whole illustrated guide to the memes.) And no matter who your candidate is, you have to admit that Fetterman has been absolutely trolling the hell out of Dr. Oz and the good doctor’s crudité and wine.

While much of this battle is taking place on the socials, it’s also happening on Google. For the last two weeks, we’ve been monitoring Google search results for “Dr. Oz.” We’ve asked others to do so as well, including those who identify as conservative, since we all know that Google knows everything about us and has crazy algorithms to tailor search results. And it’s become clear that the John Fetterman campaign has a distinct edge (more like a big lead) over Dr. Oz in the Google wars.

Though results aren’t always identical and may vary from person to person and device to device (if you’re smart and use an ad blocker, you are probably blissfully unaware of all of this), the vast majority of the time we’ve run searches for “Dr. Oz” on Google, the top result is one of three sponsored links paid for by the John Fetterman campaign.

“You just have to max bid your own name to make sure it always shows up in the top position,” he explains. “It just shows you how behind the times some people are and how shitty some of these campaigns are at doing their job.”

Bachmann says that just as SEO experts can help positive links about a client rise to the top, they can also help negative links move down on the list, hopefully to the second page. “The second page of Google is the best place to hide a dead body,” jokes Bachmann. “I did that for a famous rapper. And I also did it for a certain Philadelphia restaurateur who had lots of negative information out there about him.”

I also did some domain name searching, wondering if either campaign had pulled off a cybersquatting scheme, the way that supporters of Ori Feibush did to Councilmember Kenyatta Johnson’s name back when the South Philly developer ran against Johnson. Alas, there are plenty of great “Fetterman”-based domains that Dr. Oz could have scooped up but didn’t. And it’s anybody’s guess why nobody has purchased JohnBetterman.com for the low, low price of $19.99. (If you haven’t been paying attention, “Better Man” has become an unofficial campaign nickname for Fetterman. You can buy t-shirts.)

“I told you, these people are idiots, man,” says Bachmann. “Their campaign managers raise all this money and lose. Obama and Trump had the two best digital campaigns of our lifetimes.”

Is John Fetterman a Slacker?

John Fetterman’s well-crafted image is that of a hardworking, blue collar everyman. His critics say that’s a bunch of bullshit and that he’s a “trust fund baby.” So they’re going to love a new report from the Associated Press.

Fetterman has repeatedly touted his work transforming the office of lieutenant governor of Pennsylvania. So the AP decided to take a look at his time there.

From the AP report, which you can read in its entirety via this link;

Records from Fetterman’s four years in office, however, offer a different portrait of his time in the $179,000-a-year elected job. They show Fetterman typically kept a light work schedule and was often absent from state business, including presiding over the state Senate, which is one of his chief duties, according to an Associated Press review of his daily calendars and attendance records.

The review found that Fetterman’s daily schedule was blank during roughly one-third of workdays from January 2019, when he first took office, to May of this year, when he suffered a serious stroke. Even on days where his schedule showed he was active, a typical work day for Fetterman lasted between four and five hours, the records show.

Naturally, Fetterman’s campaign didn’t take too kindly to this report.

“This report is a misleading and inaccurate reflection of John’s actual schedule that totally fails to capture the breadth of his official work and his accomplishments,” Fetterman spokesman Joe Calvello told the AP.

And the first one out of the gate says that people who love snow will be disappointed this winter.

This Will Be Fun to Watch

The absolute shitshow that is the Stu Bykofsky vs. Inga Saffron and the Inquirer lawsuit appears to be proceeding to trial in December.

And from the Nothing-Doing Sports Desk…

Yesterday was stone-cold quiet on the local sports front, so all we’ve got for you is a heads-up that the first game in the Phils’ face-off against the Cards in the wild-card race is today, kicking off at an ultra-inconvenient 2:07 p.m. It’s lucky so many of us are still, uh, “working from home.” The Cards (93-69) are starting lefty José Quintana, while the Phils (87-75) bring in veteran Zack Wheeler, one of those rare birds who bat left but throw right.

On the slate for this weekend: Temple football has a bye week. The second game in the Phillies’ series — all three are in St. Louis — is at 8:37 on Saturday, while the third is on Sunday, also at 8:37. The Union play Toronto on Sunday at 2:30. And the Eagles kick off against those other Cardinals in Glendale, Arizona, on Sunday at 4:25. That makes Sunday a very busy sports day. —Sandy Hingston