Upper Darby grandmother Angela Greene claims she found an unwelcome surprise in the box. And the store doesn't deny it. 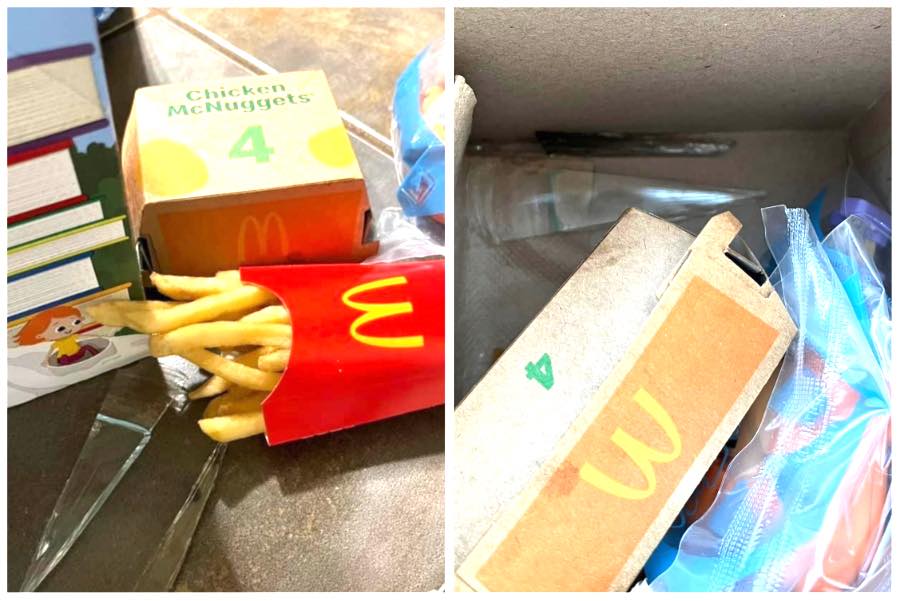 Angela Greene says she found these shards of glass in her granddaughter’s Happy Meal from McDonald’s in Upper Darby. (Photo courtesy of Angela Greene)

Tuesday started out as a pretty typical day for Upper Darby’s Angela Greene. She and her daughter picked up Greene’s four-year-old granddaughter from the nearby preschool. But things took a, well, sharp turn after they all went to the McDonald’s on 69th Street in Upper Darby to get the girl a Happy Meal. Four McNuggets. Double fries. And, alleges Greene, two large shards of glass, which she says she found inside once the trio got home.

Typically, when Greene picks up food from the McDonald’s for her granddaughter in her own car, she lets her open the box and eat the food in the back seat. But in this case, Greene and her daughter took her daughter’s car, and her daughter doesn’t allow any food or drink in the vehicle.

“I had a Pepsi in her car recently, and she asked me why I was drinking a soda in there,” Greene laughs. “She keeps a very clean car and doesn’t want soda or french fries all over the place.”

So Greene’s granddaughter wasn’t allowed to touch the Happy Meal until they got home.

Greene says she peered into the box once they got settled and immediately saw two shards of glass. “It was insane,” she says. “Thankfully, she didn’t ingest.”

She drove back over to the McDonald’s to talk to the employees. Eventually, alleges Greene, one employee at the Upper Darby McDonald’s told her that somebody had broken into the restaurant the night before and that the shards of glass must have fallen into the Happy Meal boxes.

We reached out to the McDonald’s in Upper Darby, and an employee there confirmed that glass from a break-in had apparently fallen into some Happy Meal boxes. She referred us to an off-duty manager, who didn’t dispute Greene’s account and said somebody at the location was “taking care of the problem” before referring us to a regional manager.

The McDonald’s regional manager, who also didn’t dispute Green’s claim, assured us that all of the boxes had since been thrown away and that they wouldn’t be stored under windows in the future.

On Tuesday, a spokesperson for McDonald’s main corporate office sent us a statement from the McDonald’s franchisee responsible for location in question.

“We were alarmed to hear of this matter and took immediate steps to ensure Happy Meal boxes were discarded and communicated directly with the customer at the restaurant,” said franchisee Rich Doane. “Providing safe, high-quality food is always our priority, and we have taken steps to avoid something similar happening in the future.”

Seeing as we’re talking about allegations of glass shards in a McDonald’s Happy Meal and that the whole McDonald’s “hot coffee lawsuit” thing isn’t too distant in our memories, I had to ask Greene if she had plans to take any legal action against McDonald’s over the incident. She says the thought hadn’t crossed her mind.

“I’m a childcare provider,” says Greene. “I care about all children. And I just want to make sure people are aware of what happened here. … This isn’t just about glass. How many meals does McDonald’s serve each day? People need to be trained to make sure the food they are giving you is safe in every way.”

Greene says the Upper Darby McDonald’s did replace her granddaughter’s Happy Meal, this time without shards of glass.

“Just Pokémon cards,” says Greene, referring to the toy inside.