And why New Jersey would become the best friend of any Philadelphian seeking one. 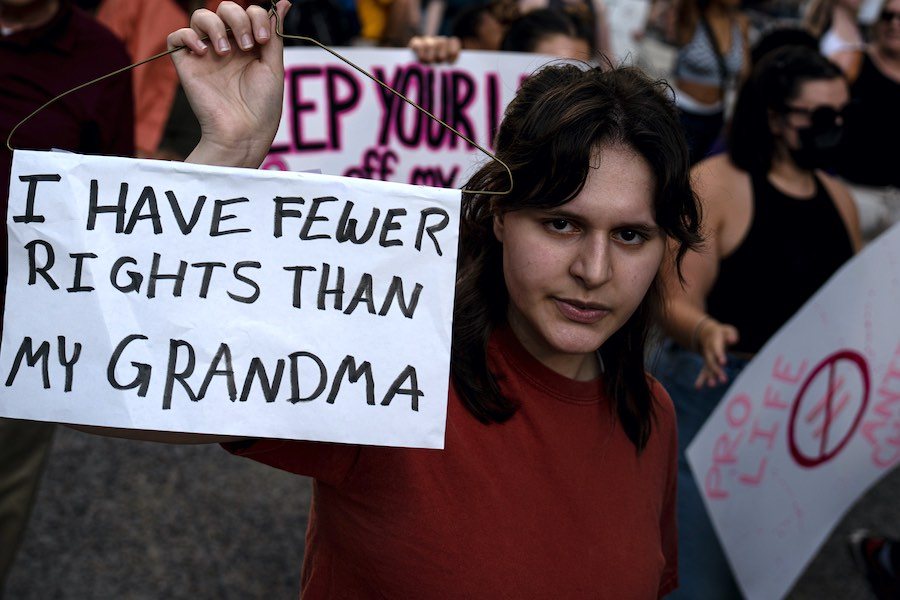 An abortion rights protester in Philadelphia / via Getty Images

Other states in the region, including New Jersey, New York, Maryland and Delaware, along with Washington, D.C., have laws on the books specifically protecting abortion rights. And some of those states are in the process of enacting measures to provide greater access to abortion. Meanwhile, other states around the country sprang into action to immediately restrict abortions after the Supreme Court’s decision to overturn Roe v. Wade — the closest such state being Ohio, which is facing a lawsuit over its brand-new ban on abortions after six weeks of pregnancy, a law that was automatically triggered by the SCOTUS ruling.

But Pennsylvania has no state law protecting abortion rights, meaning we could easily become Ohio or, more drastically, Texas or Alabama. What Pennsylvania does have is Republicans in control of both the state Senate and the state House of Representatives, the two legislative bodies that make the laws of our particular land.

Of course, what Pennsylvania also has is Tom Wolf, who has been considered to be among the country’s most liberal governors. Naturally, Wolf will veto any legislation restricting abortion that comes across his desk. And he’s done just that on three occasions, including in 2017, when he vetoed a bill that would have been one of the most restrictive abortion laws in the entire country. That bill called for prohibiting abortions after 19 weeks of pregnancy, and it would have made a common abortion procedure a criminal act — a felony.

But Wolf’s last full day in office will be Monday, January 16th, with the winner of this November’s gubernatorial election taking over.

On one hand, you have Democratic candidate Josh Shapiro, the attorney general of Pennsylvania. Here’s Shapiro’s position on abortion, according to his campaign:

Our Democratic Governor’s veto pen is the only thing standing in the way of Harrisburg Republicans’ attempt to ban abortion, pass dangerous Texas-style laws, and put women’s health at risk. In the face of unprecedented attacks against the right to choose, Josh will be the last line of defense for Pennsylvania — he will veto any bill that would restrict abortion rights, and he will expand access to reproductive care.

And on the polar opposite other hand, you have Shapiro’s opponent, Doug Mastriano, the state senator representing the far-right 33rd District, which hasn’t had a Democratic state senator since World War II was being fought. Mastriano’s position on abortion couldn’t be a starker contrast to Shapiro’s. This is what he had to say when the Supreme Court’s draft was leaked back in May:

January 22, 1973, was one of the darkest days in American history. On that day, seven justices of the Supreme Court ruled that the right to life could merely be reduced to a decision of convenience. … Our nation is now on the precipice of reversing this science-denying genocide. Thanks to President Trump, a conservative majority on the Supreme Court is set to right this historic wrong. Since I was elected to the Senate, there has been no more important issue to me than the right to life.

Mastriano went on to point out that one of the first pieces of legislation he introduced as a state senator was the so-called Heartbeat Bill, which would have banned abortions if a fetal “heartbeat” could be detected. Some people believe a fetal heartbeat can be heard as early as five or six weeks into pregnancy, a claim that is hotly contested by others.

If Republicans retain control of the state House and Senate after November’s election — and it should be noted that Republicans have controlled both chambers in Pennsylvania simultaneously for all but seven of the past 30 years — it all comes down to the governor’s race.

Should Shapiro emerge the victor, there’s no chance a bill restricting abortion rights will make it past him. If Mastriano wins, it’s hard to imagine him going against the far-right tide he has ridden to this point.

Then there’s the restrictive constitutional amendment Republicans are trying to push through. That would be veto-proof if approved by Pennsylvania voters as a ballot measure, which is how amendments to the state constitution have to be approved. Keep in mind just how big a state Pennsylvania is and how almost all of it shows up red on those election-result maps.

While some polls show Shapiro with a slight lead over Mastriano, who will win that race is anybody’s guess. And you can be sure both sides of the abortion debate are pumping huge amounts of money into the coffers of their respective candidates no matter what their stand on any other topic. For many people, this has suddenly become a single-issue election.

Meanwhile, on the other side of the bridge, staunch abortion rights advocate Phil Murphy just started his second term as New Jersey governor in January and isn’t scheduled to go anywhere until 2026.

He’s working to expand abortion access in his state for residents and for those from other states who lose access, just as abortion rights activists are trying to figure out how to handle an influx of patients who don’t live in New Jersey.

So if Pennsylvania stays red in November in both legislative chambers and also goes that way in the governor’s office — or if a constitutional amendment significantly restricting abortion succeeds even if Shapiro wins — Philadelphians will undoubtedly be crossing the river for more than just recreational marijuana, better liquor stores, and the sands of the Jersey Shore.