A City Outraged: Scenes From a Weekend of Protest in Philadelphia

"As much as the feminist movement has moved mountains," says protester Jenny Laden, "we still live with the fact that men don't have to put up with the shit that women have to endure." 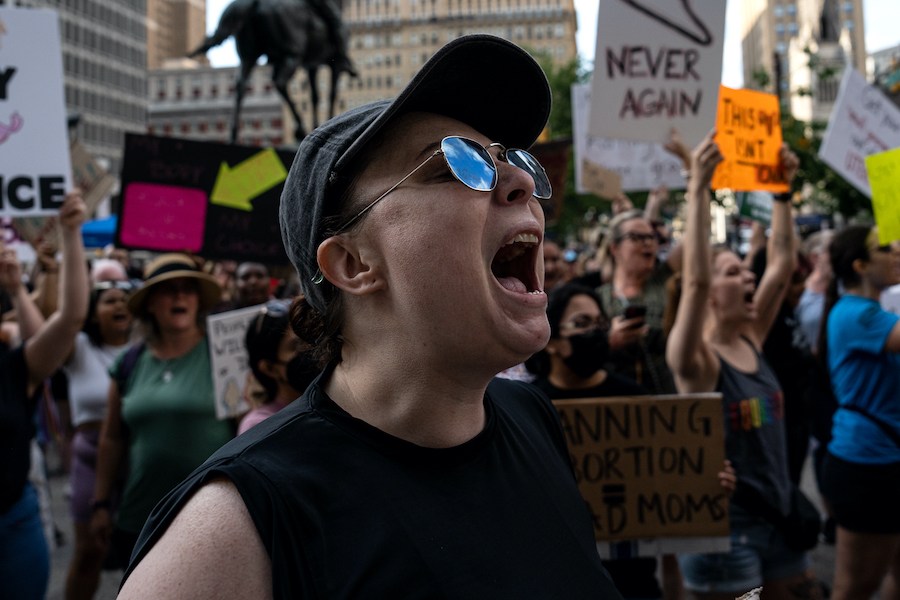 A protester in Philadelphia in the wake of the Supreme Court’s decision to overturn Roe w/ Wade and fundamentally change abortion laws in the United States. / Photograph by Wolfgang Schwan/Anadolu Agency via Getty Images

We knew it was coming, of course.

On May 2nd, Politico stunned the entire nation with a leaked document showing that the Supreme Court was set to overturn Roe v. Wade, thereby changing the course of abortion rights in the country for the foreseeable future. This took pretty much everybody by surprise, no matter which side of the abortion battle you were on.

Cable news networks went wild. Pundits debated the motive for the leak. Some wondered if the Supreme Court document was an elaborate hoax. But Chief Justice John Roberts soon confirmed that the leaked document — a majority draft written by conservative justice Samuel Alito — was real. And the country braced for the actual, final decision to be announced. An investigation, still ongoing, into the source of the leak commenced. As if that matters.

Well, after a week of decisions on guns, separation of Church and State, and lots of speculation on what case would be decided next, the Supreme Court issued its decision in the morning on Friday. It didn’t take long for social media to spread the news and for organizers to announce various protests in Philadelphia scheduled for Friday and the rest of the weekend.

South Philly resident Jenny Laden protested on Friday. She would have taken her teenage daughter, but she’s away at summer camp. Laden observed that the crowds were similar to those who turned out for the protests after the murder of George Floyd in 2020 in that they included a little bit of everybody.

Laden points out that she was part of large abortion rights protests thirty years ago, in 1992, when the debate raged on as the Supreme Court was taking up Planned Parenthood v. Casey, a case that could have upended Roe but didn’t once it came to a vote. Casey offered the first opportunity for the Supreme Court to fundamentally change abortion laws in the United States since Roe was decided in 1973.

“Women are now going to die when they could be saved,” Laden says of the new decision. “This is a moment when we need to acknowledge the deeply embedded misogyny that lives in us every day, all day long. As much as the feminist movement has moved mountains, we still live with the fact that men don’t have to put up with the shit that women have to endure.”

Below, more photos from the abortion rights protests in Philadelphia: 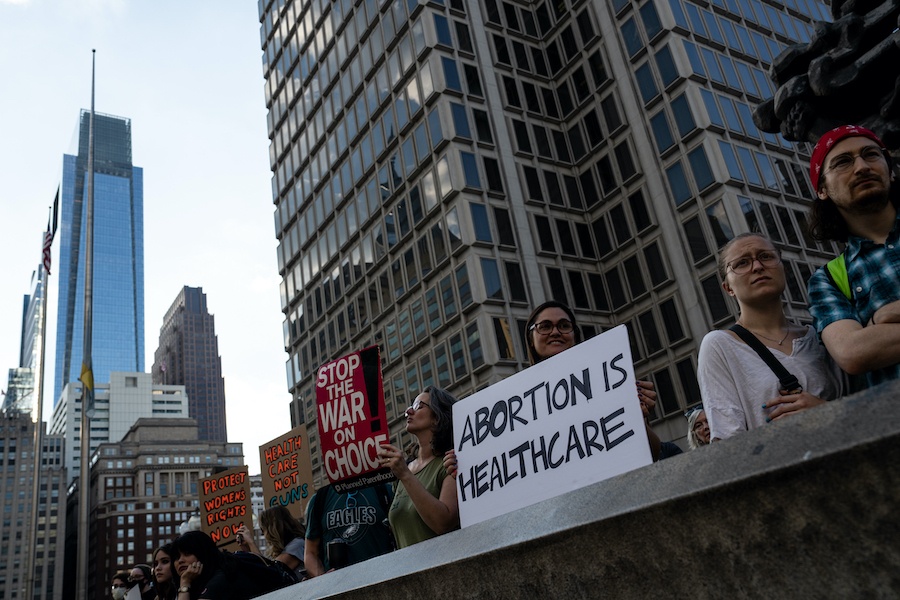 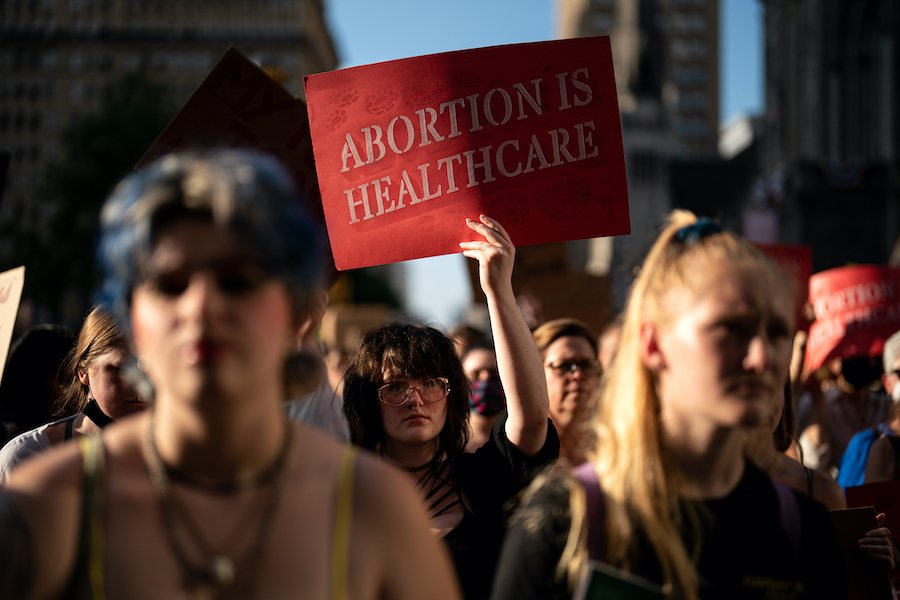 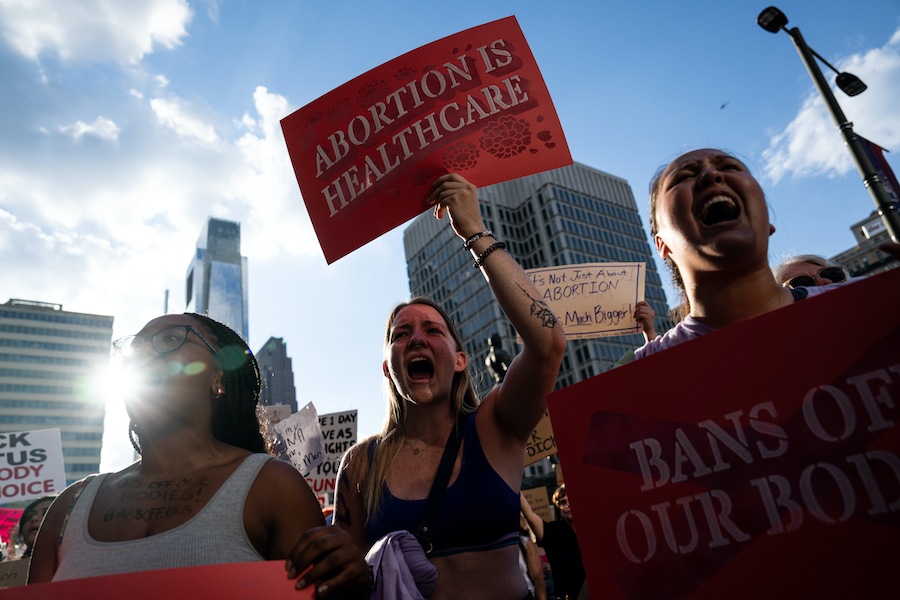 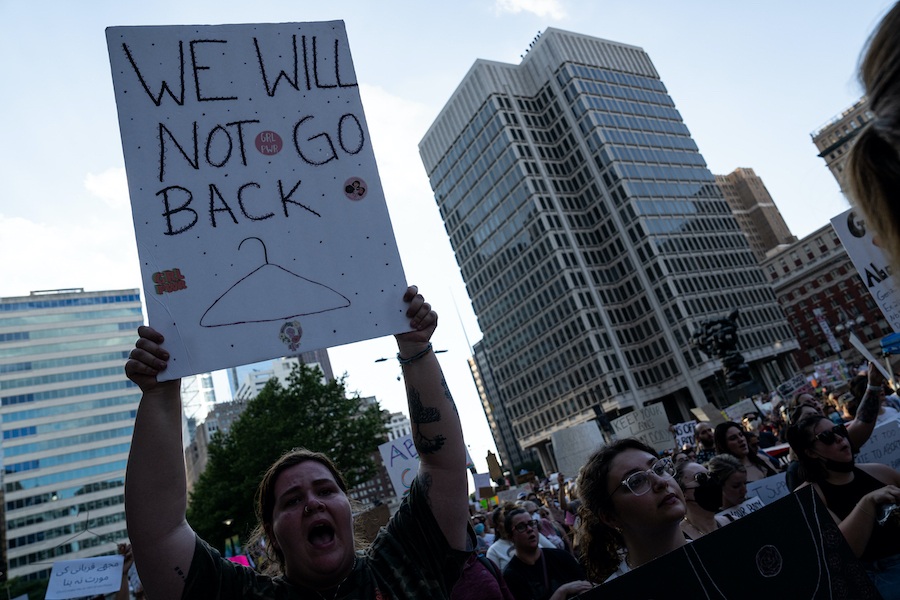 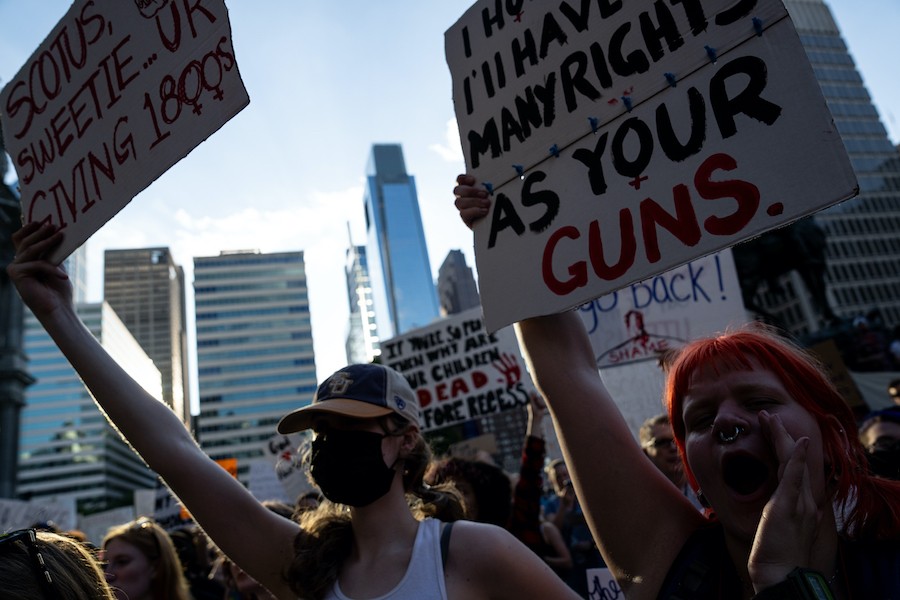 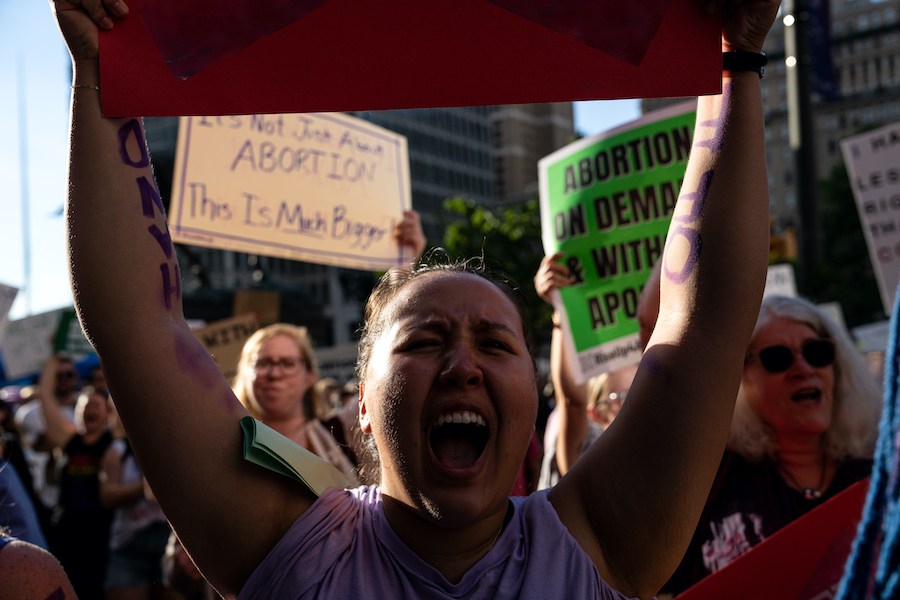 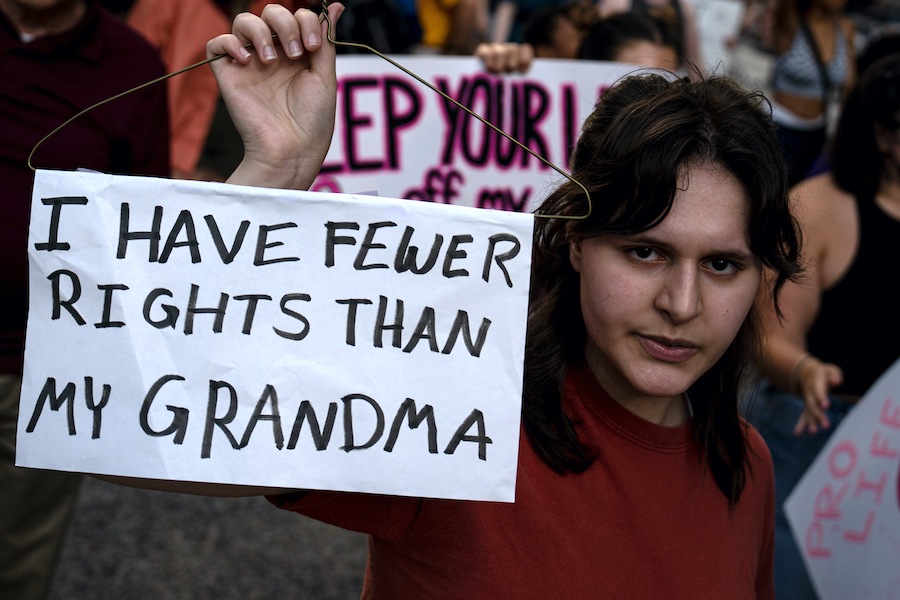 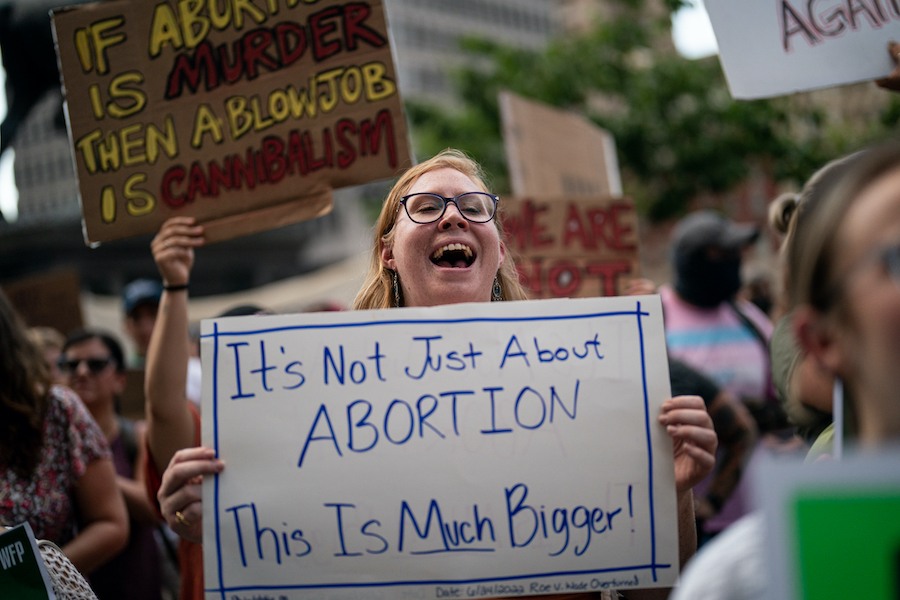 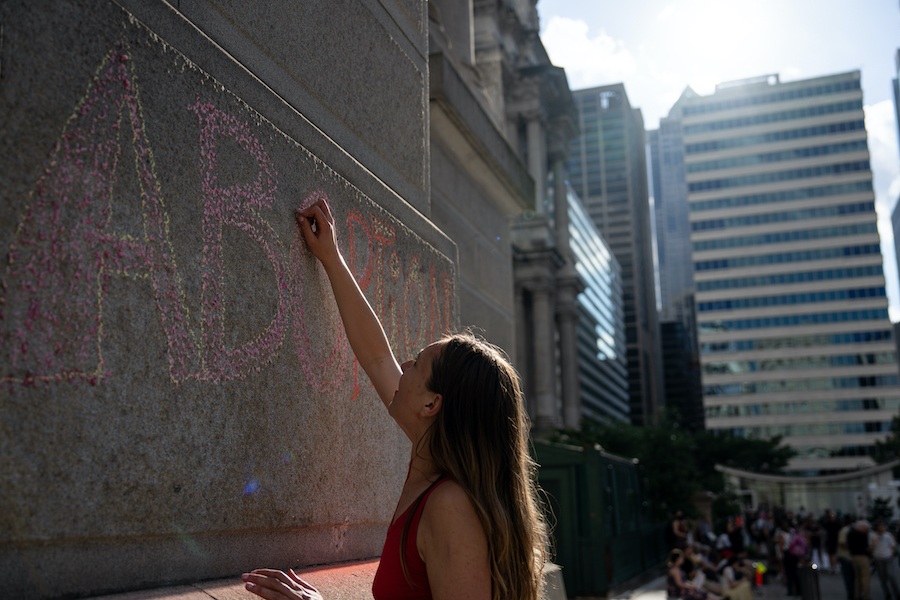