Before winning his first Academy Award, hometown hero Smith slapped the comedian for insulting his wife. Many were displeased that the usually cheerful actor resorted to violence, but I'm not one of them. I see it as a wake-up call to those who choose to eff around and find out. 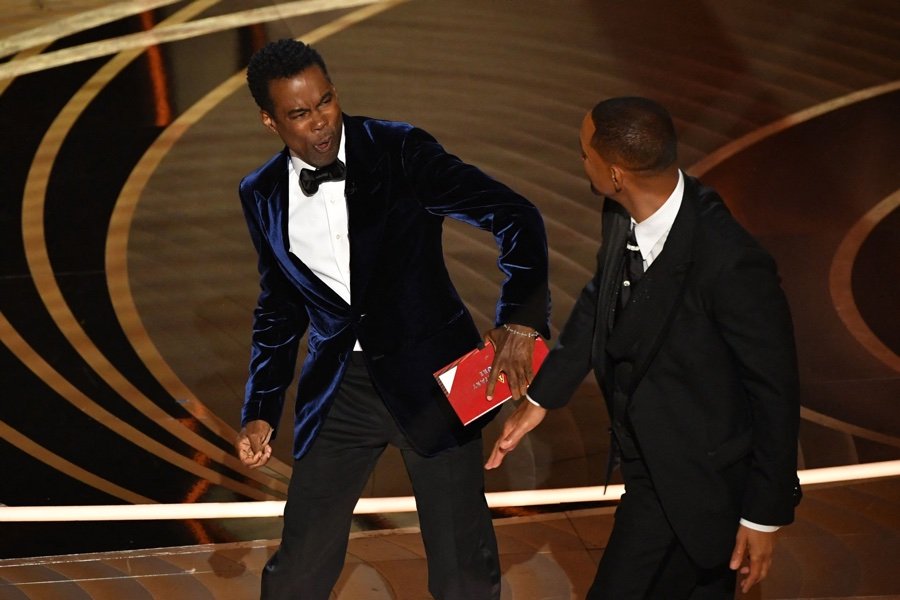 Will Smith’s Oscar slap of Chris Rock onstage during the 94th Academy Awards at the Dolby Theatre in Hollywood on March 27, 2022. (Photo by Robyn Beck/AFP via Getty Images)

Bad things happen in Philadelphia, and they can apparently happen at the Oscars as well.

During Sunday night’s live broadcast of the 94th Academy Awards, the “slap heard around the world” was served by none other than superstar Will Smith to the face of legendary comedian Chris Rock.

For those who might view this as an overreaction, context matters — big-time.

Rock was presenting the award for Best Documentary Feature (which would be won by Philly legend Questlove for Summer of Soul). During his opening skit, he decided to joke: “Jada, I love you, G.I. Jane 2, can’t wait to see it.”

There was delayed and nervous laughter from the audience after he made the remark. Will tried to awkwardly play it off with a laugh until the camera showed Jada, who is bald, rolling her eyes in disgust — for good reason. In 2018, Jada revealed to the public that she had been diagnosed with alopecia areata, an autoimmune disease that develops when the body’s immune system attacks hair follicles. Since then, she’s been very open about the challenges she’s faced living with the condition and building her confidence to embrace extreme hair loss.

Chris’s G.I. Jane joke was in reference to the 1997 film starring actress Demi Moore, whose character had a buzzcut hairstyle while in combat. For him to mock a woman’s struggle with an autoimmune disease on national television was ableist, tasteless and hurtful. For Will, to watch Jada, an actress who wasn’t nominated — and wasn’t a part of the show beyond rooting for him — be singled out by Rock must have been devastating.

He’s “West Philadelphia, born and raised,” though, and he came out swinging. He walked right up onstage, smacked Rock in the face, and sat back down. Rock, in complete crisis mode, tried to reiterate that “it was just a G.I. Jane joke.”

But Will wasn’t having it.

“Keep my wife’s name out of your fucking mouth,” he told Rock twice. Perhaps the second time was for when Chris made another shady joke about Jada while he hosted the Academy Awards in 2016.

So before anyone gets defensive, let’s get this part out of the way: Should violence be the immediate answer? No. But that’s not the point here.

While it’s easy to chastise Will Smith for physically assaulting someone at the Oscars, it’s also important to recognize the dynamics. A Black woman was being insulted about her appearance and health diagnosis by an influential man in a predominantly white space where women like her are often ridiculed. Had Will not stepped up in that moment, the situation could have become a running joke — one that might have caused harm to other Black women who struggle with alopecia.

Not all “jokes” are funny, and powerful people shouldn’t be allowed to use them to deflect accountability. Chris Rock is a multi-millionaire who’s been in comedy for decades; he knew better (especially when you consider that he made a 2009 documentary about Black women’s hair woes). Yet there he was on Hollywood’s biggest stage, disrespecting a Black woman in front of her husband and industry peers. Too often, we forget that celebrities have emotions and feelings just like us, and that they can lead those celebs to defend, protect, and react impulsively.

Roughly 40 minutes after his confrontation with Rock, Will was back onstage to accept his first-ever Oscar for Best Actor. He was apologetic to those in the room who saw him act out of character, but he was also frank about what took him there.

“I know to do what we do, you gotta be able to take abuse and have people talk about you,” Will said. “In this business, you gotta have people disrespecting you. And you gotta smile and pretend that’s okay.”

But there are times when jokes can be so harmful that you can’t smile them off — because doing so will embolden the culprit. Sometimes, those who have a penchant for crossing the line need to be reminded where that line is. Some might feel Will’s actions set a bad example. I’m not concerned. Adults should know how to act — including Rock.

We all witnessed what happens when individuals like Chris Rock choose to, as they say, fuck around and find out. Will simply taught him, Philly-style.