All the Best Places to Play Board Games in Philly

The board-gaming boom has overtaken our region. Get in on the action at one of the city’s many places to try your hand at a new-to-you game. 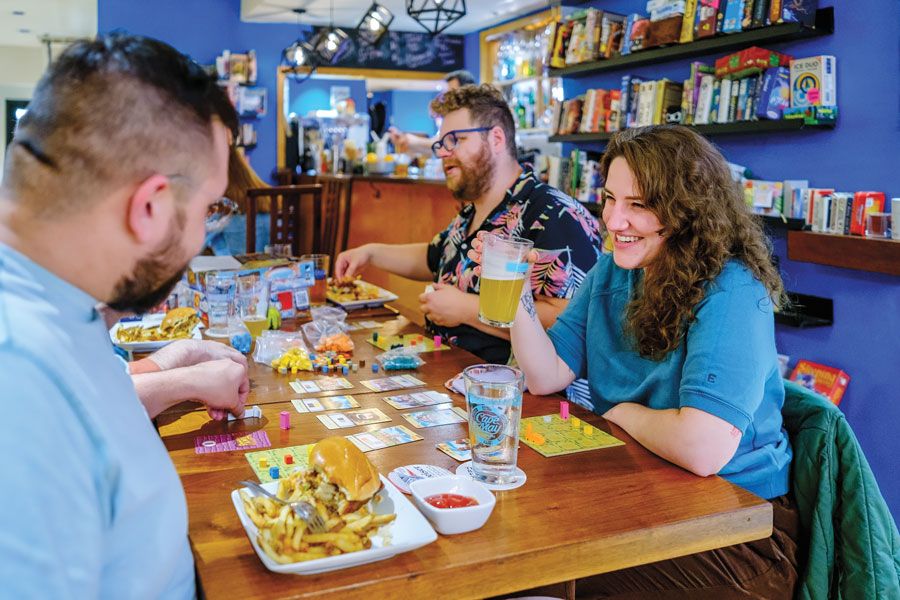 A pause in the action at Queen & Rook Game Cafe. / Photograph by Jeff Fusco

Board games have a lot more to offer than Monopoly and Scrabble these days. While the long hours at home and Zoom fatigue during the pandemic have contributed to a board-game boom, Philly was undergoing something of a renaissance in the genre even before COVID darkened our doorsteps. Here are all the places ready to pour you a drink or offer you a chair as you play one of your old favorites — or enter a whole new world of tabletop gaming.

When this Queen Village store opened its doors in 2019, it set its sights on becoming the “coziest game shop in the world.” These days, the 1,200-square-foot shop sells more than 400 games — everything from classics­ like Trivial Pursuit and Jenga to newer faves such as Splendor and Wingspan. The boutique hosts events nearly every night of the week, from open board-game nights, where guests can check out a selection­ from the shop’s 150-game library, to evenings dedicated to role-playing games. 519 South 5th Street, Queen Village.

Is it a restaurant with board games? A board-game shop with a full menu and bar? Whatever it is, we dig it — and you will, too, especially if you’re looking­ for vegan and gluten-free dishes to pair with your game. (Harry Potter fans will get a kick out of the drink menu, which includes non-alcoholic Butterbeer and a selection of “Wizarding” cocktails.) Throughout the pandemic, the shop has kept things rolling with a nicely outfitted streetery for outdoor dining and game play while making its massive stock of more than 1,000 games available for pickup or delivery. 607 South 2nd Street, Queen Village.

With boozy milkshakes and 16 beers on tap, more than 800 games for you to browse, and a menu of late-night bites like wings, pizzas and nachos, this Spring Garden game cafe is equally suited for a family outing or a first date. New to gaming? The options here come with scannable codes that direct you to online resources explaining the rules, and the knowledgeable staff can help you find something suited to your group. With days dedicated to open play for fan favorites like Dungeons & Dragons and mah-jongg and weekly Quizzo nights, there’s always an opportunity to get in on the action. 1642 Fairmount Avenue, Spring Garden. 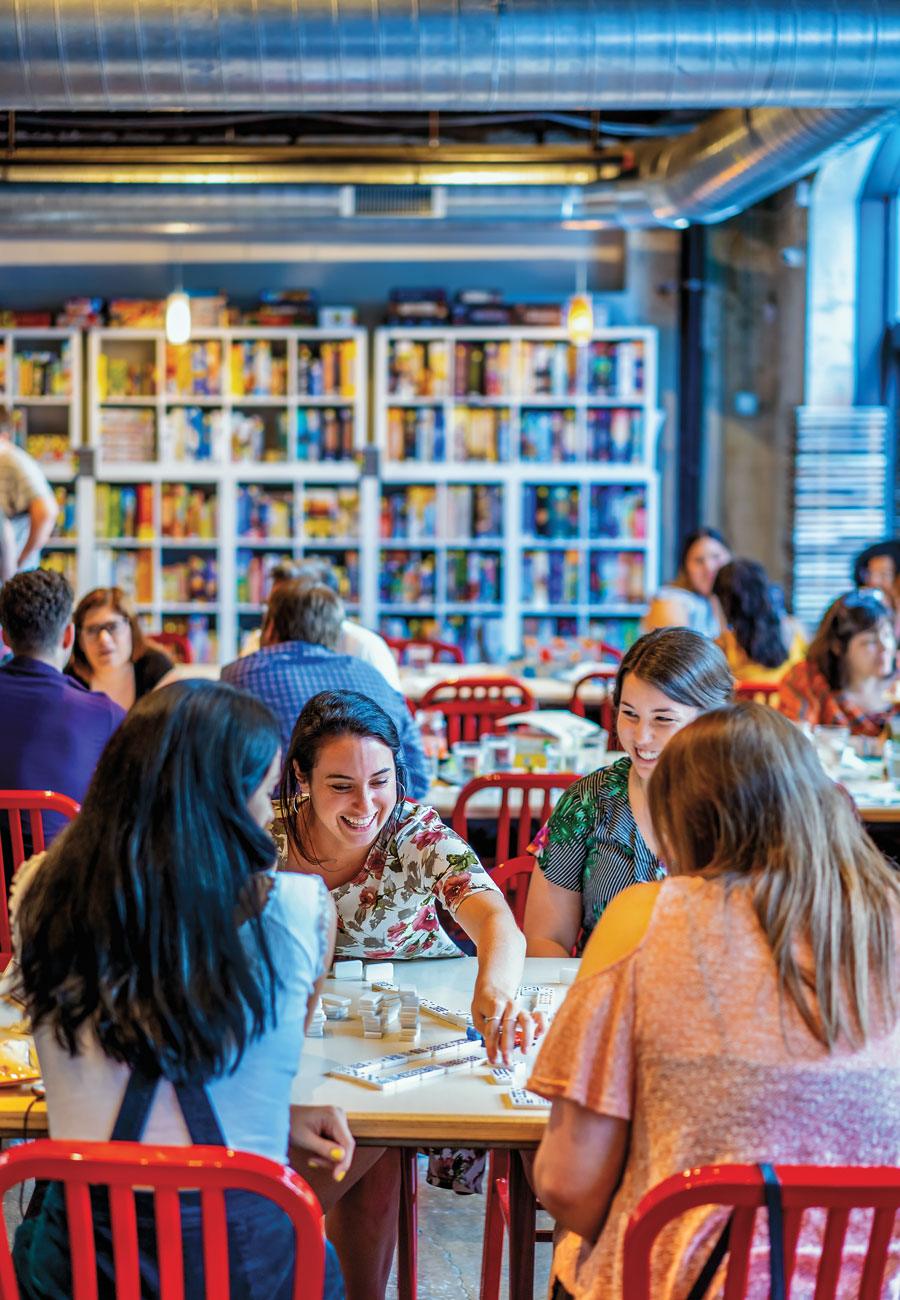 Billed as Philly’s oldest game shop still in operation, this West Philly store is on a mission to eschew the white male “gamer geek” stereotype in favor of an environment that’s women- and LGBTQ-friendly. The 4,500-square-foot shop has a second-floor space that hosts daily gaming events, with a big focus on the trading-card game Magic: The Gathering (which is by far the shop’s number one seller, despite the fact that Redcap’s stocks more than 15,000 unique games and products), plus a weekly Dungeons & Dragons night and a Digimon tournament. The vaxxed-only space is currently a food-and-drink-free zone to allow for full-time masking. 3850 Lancaster Avenue, West Philly.

The Basement Board Game Cafe

Reserve a table online for a four-to-five-hour block to take advantage of this shop’s library of more than 800 games. (The most popular include Wingspan, 7 Wonders and Ticket to Ride.) The retail arm sells more than 50 games you can browse, while the BYOB cafe serves coffee­ and finger foods like potato wedges. Swing by on a Sunday between 4 and 9 p.m. to join open game night. 6109 Ridge Avenue, Roxborough.

Want the board-game cafe to come to you? Say hello to Haven,­ Philly’s recently launched (and only Black-owned) board-game rental service. It operates a bit like Netflix back when it used to trade in DVDs — you select any number of games you’d like to rent on Haven’s website, pick them up from Avenues Cafe, then get five days to play as many rounds as you can talk friends and family into before you collect all the pieces, pack them up, and drop your game off for the Haven team to sanitize­ for the next renter. Pickup and drop-off at Avenues Cafe, 7201 Germantown Avenue, Mount Airy. 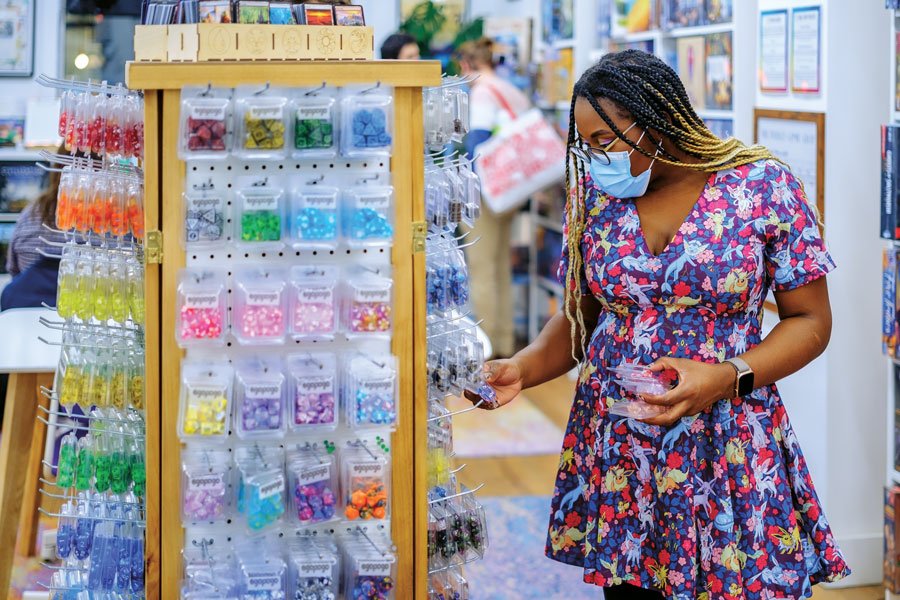 Browsing for dice at the Philly Game Shop. / Photograph by Jeff Fusco

The Board and Brew

The owners of this College Park, Maryland, board-game cafe recently expanded to Philadelphia, bringing their library of more than 500 games and a robust menu of sandwiches, soups, desserts, coffee drinks, beer, wine and cocktails to University City. Not sure how to select a game? The cafe’s website includes a database that’s sortable by number of players, length of game play, and category, from party games to kid-friendly options to cooperative games and more. 3200 Chestnut Street, University City.

Operating as one-third of a combined goth and metal record store known as Reliquary, Dark Depths specializes in trading-card and role-play games such as Magic: The Gathering, Pokémon and Flesh and Blood as well as miniatures war game Warhammer. (PSA: They sell their entire in-store board-game stock and then some on an eBay store under the same name.) Fans can also join in-store gaming events — entering the online community via the shop’s Discord chatroom is the easiest way to stay up-to-date. 732 South 4th Street, Queen Village.

A quick poll of Philly Mag staffers confirmed that no, puzzles aren’t board games. And yet the fact that you can sit at a table and entertain yourself for hours with a bunch of tiny pieces stored in a box would have me argue that puzzles and board games are cousin, if not sister, pursuits. The best part? You can have as much fun putting a puzzle together with a group as you can on your own. The next time you’re looking to get puzzlin’, try Philly-based Puzzle So Hard, which markets challenging 1,000-piece versions depicting street art, fiber art, and mind-bending nature-inspired color gradients. Want something more personal? Try Quakertown-based Joslin Photo Puzzle Co., which specializes in custom puzzles so you can turn that baby photo, beloved book cover or artwork into a one-of-a-kind keepsake. 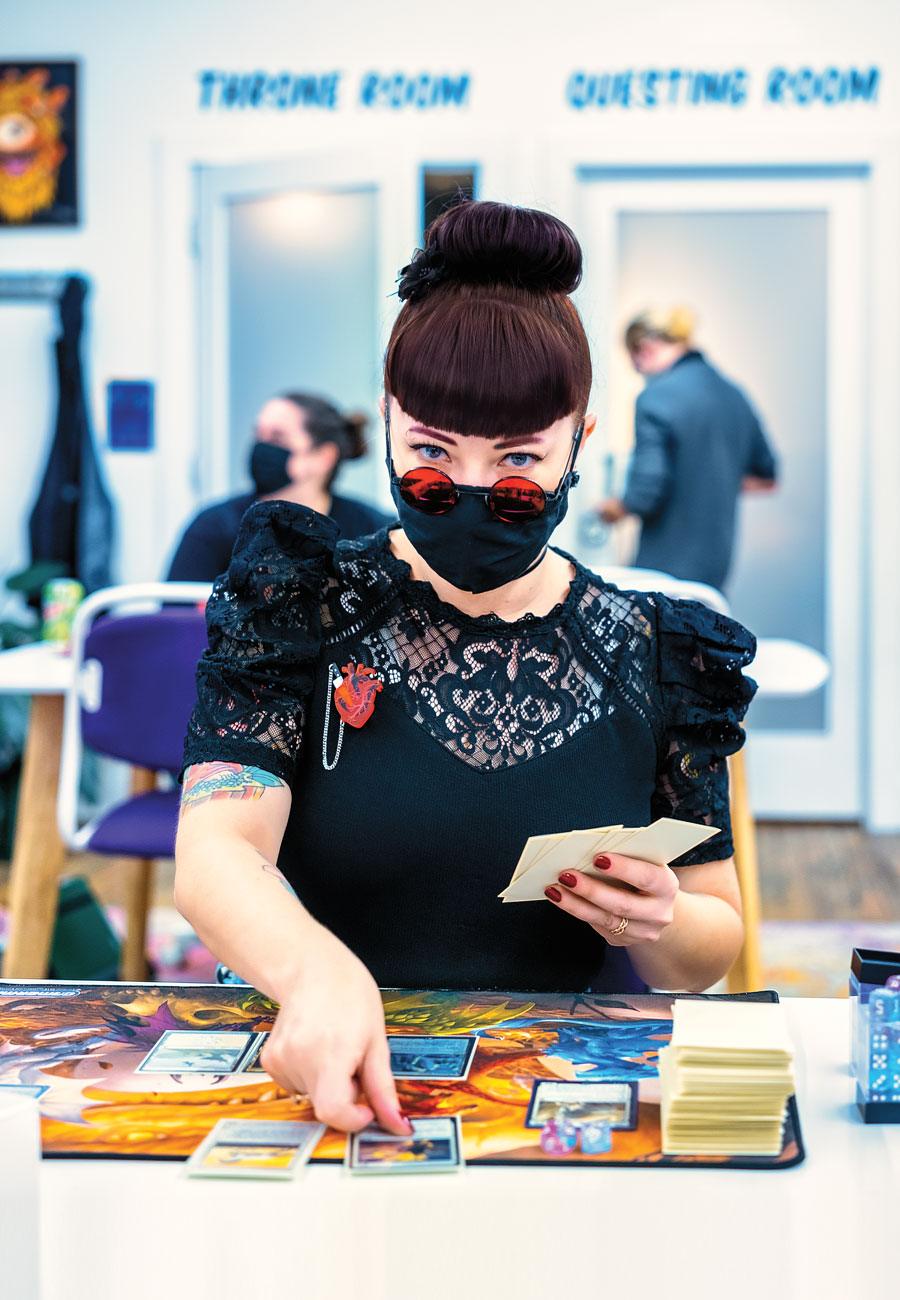 The Philly Game Shop in Queen Village hosts events nearly every night of the week. / Photograph by Jeff Fusco

What to Play Now

Benn Roe, owner of West Philly shop Redcap’s Corner, walks us through his top picks for games based on your party’s size and experience level.

Carcassonne (Easy) – In this tile-laying game, up to five players build out cities, roads, cloisters and farms, then earn points by placing characters (“meeples”) to claim them. “There’s so much strategy layered into such a simple concept,” says Roe.

Star Realms (Medium) – This deck-building game is most interesting with two players, according to Roe. You collect cards to build a fleet of ships to battle your opponent’s.

Robinson Crusoe: Adventures on the Cursed Island (Advanced) – In this cooperative game, players join forces to gather food, build shelter, and survive on an island after a shipwreck.

Splendor (Easy) – Players act as “the greatest gemstone merchants of the Renaissance,” collecting jewels and cards to increase their wealth and prestige.

Smash Up (Medium) – The mechanics are basic, says Roe, since you’re just following the instructions on the cards. Players shuffle together the decks of two “factions”­ to try to conquer more bases than their opponents.

Spirit Island (Advanced) – Up to four people can take part in this cooperative game in which players act as spirits to defend an island against colonizers.

Codenames (Easy) – Players split into two teams, both working to extract their secret agents from the field using word association.

Mysterium (Medium) – In what Roe calls a game of “reverse Clue,” participants work together as mediums seeking to communicate with a spirit (a role held by one player) to solve its murder.

A Game of Thrones: The Board Game (Advanced) – For this war game, fans of the popular series use familiar characters and houses to battle for control of the lands of Westeros.

Published as “Roll With It” in the January 2022 issue of Philadelphia magazine.