The former catcher made his major league debut 135 years ago this month, on September 11, 1886. His longevity in the dugout is a feat we’re not ever likely to see in pro sports again. 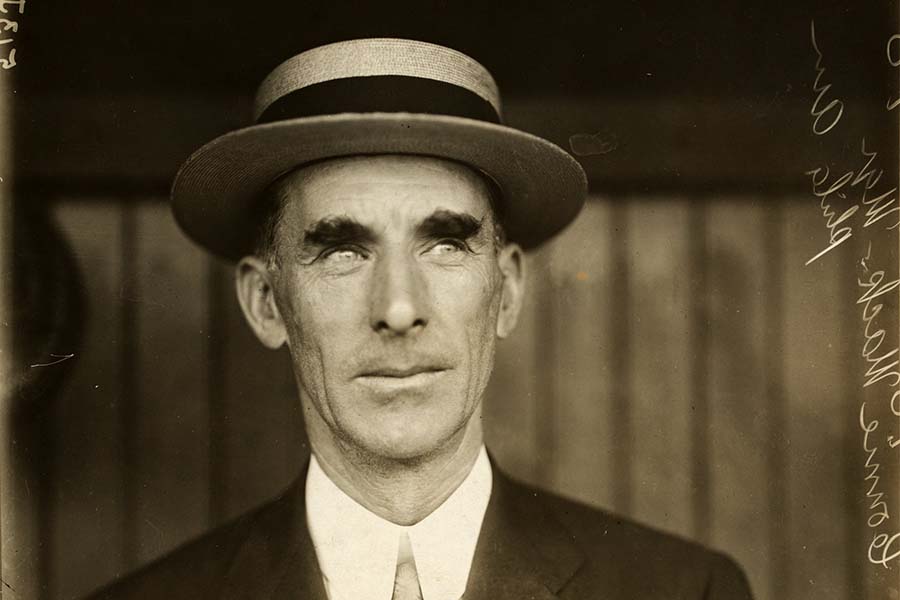 Connie Mack on January 7, 1911. / Photograph by Paul Thompson via Flickr

The Phillies had such an up-and-down season that you have to think second-year manager Joe Girardi may find his job on the line. As it stands, he’s the fifth Phils manager since 2013, the year that ended the nine-season tenure of Charlie Manuel. This managerial lack of longevity got us thinking about Connie Mack, the Philadelphia Athletics manager known as “The Grand Old Man of Baseball,” and with good reason: He occupied the A’s dugout (wearing a suit and tie, no less) for an amazing stretch from 1901 to 1950.

Add in his 11-year playing career and the three seasons he managed the Pirates, and you’ve got a total of 65 years spent in the game. Perhaps even more amazingly, his players reportedly loved him, win or lose. Here are a few more facts about Mack, who made his major league debut on September 11, 1886.

About That Name …
Mack, whose birth name was Cornelius McGillicuddy, was born in Brookfield, Massachusetts, in 1862 to Irish immigrants. The story that he shortened his name so it would fit in printed box scores is probably apocryphal, but that’s a lotta moniker. He quit school after eighth grade to work and contribute to the family finances, but he also played catcher for the town’s baseball team.  That led to stints with minor-league teams in Connecticut before he was signed by the Washington Nationals. He briefly jumped to the nascent Players League in 1889, investing his life’s savings of $500 in the Buffalo Bisons, who promptly folded, costing him his investment. He moved on to the Pittsburgh Pirates, where he finished out a playing career in which he was noted mostly for trash-talking opponents and expertly imitating the sound of a foul tip hitting the bat. He was likely responsible, in the latter capacity, for an 1891 rule change that said a batter had to have two strikes on him to be called out if the catcher caught a foul tip. Mack was six-foot-two and so thin that his nickname as a player was “Slats.”

After Mack established the Philly A’s franchise, his team won six of the first 14 American League pennants as well as World Series titles in 1910, 1911 and 1913. But after the team lost the 1914 Series to Boston in four straight games, he took the radical step of selling off the club’s best players — a step he’d repeat often enough that in his obituary, the New York Times noted, “No other manager in the history of the game ever handled more young players and brought more of them to stardom and on to fortune. But it is probable that he will be best remembered for his sensational scrapping of championship machines, the tearing apart of teams that other men would have been eager to lead.” Sixers, are you listening?

Chicken Salad and Chicken …
When Mack was manager, the A’s played in Shibe Park at 20th and Lehigh, the first steel-and-concrete stadium used for baseball. The 23,000-seat park opened in 1909, five blocks west of the team’s previous home field, the Baker Bowl, which when built in 1887 was considered state-of-the-art and seated 12,500 fans. Phils Hall of Famer and longtime broadcaster Richie Ashburn once said of Shibe, “It looked like a ballpark. It smelled like a ballpark. It had a feeling and a heartbeat, a personality that was all baseball.” (Ashburn also, however, once said of Shibe’s successor, Veterans Stadium, and Shibe that the difference between them was “like the difference between chicken salad and chicken shit.”)

With his reassembled team, Mack led the A’s to back-to-back World Series wins in 1929 and 1930 before losing to the Cardinals in 1931. Overall, he managed in 7,755 games and won 3,731 of them while losing 3,948 — all records that no other manager has ever come close to or likely ever will. That Times obit called him “a new type of manager,” going on to explain:

The old-time leaders ruled by force, often thrashing players who disobeyed orders or committed blunders on the field or broke club rules off the field. One of the kindliest and most soft-spoken of men, he always insisted he could get better results with kindness. He never humiliated a player by public criticism. No one ever heard him scold a man in the most trying times of his many pennant fights.

About That Elephant …
Yet he was also a hard-nosed businessman, once explaining to a cousin, “The best thing for a team is to be in the running and finish second. If you win, the players all expect raises.” Another of Mack’s nicknames was “the Tall Tactician”; he valued brains over brawn and once traded away Shoeless Joe Jackson for having a bad attitude. It may not have been the wisest strategy; Mack was often strapped for cash and insisted on running the team himself even after most others brought on general managers.

Gentlemanly though he might have been, Mack was never interested in breaking down baseball’s color barrier, not even after Jackie Robinson’s debut at first base for the Dodgers in 1947. The A’s didn’t sign a Black player until the 1953 season, after Mack retired.

Mack had two sons and a daughter by his first wife, who died following the birth of their third child, and four daughters and one son, Cornelius Jr., by his second. Grandson Connie Mack III served as a U.S. Representative and then a U.S. Senator from Florida from the early ’80s to the early aughts. III’s son, Connie Mack IV, is a former U.S. Rep from Florida who’s now a lobbyist and was formerly married to Sonny Bono’s widow, Mary.

Mack was elected to the second class of the Baseball Hall of Fame, in 1937. Shibe Park was renamed Connie Mack Stadium in his honor in 1953. In 1955, because of financial difficulties, his family sold the A’s to Chicago businessman Arnold Johnson, who moved the franchise to Kansas City; it moved once more, to Oakland, in 1968. Back in 1905, Giants manager John McGraw opined that Mack had a “white elephant” on his hands with the A’s — a team, McGraw claimed, that no one else wanted. Mack promptly adopted a white elephant as the team’s logo, a symbol the A’s still use today. He died in 1956 at the ripe old age of 93.