Going to a Philly Concert? You May Have to Bring Your Proof of Vaccination

New requirements are popping up at area music venues. 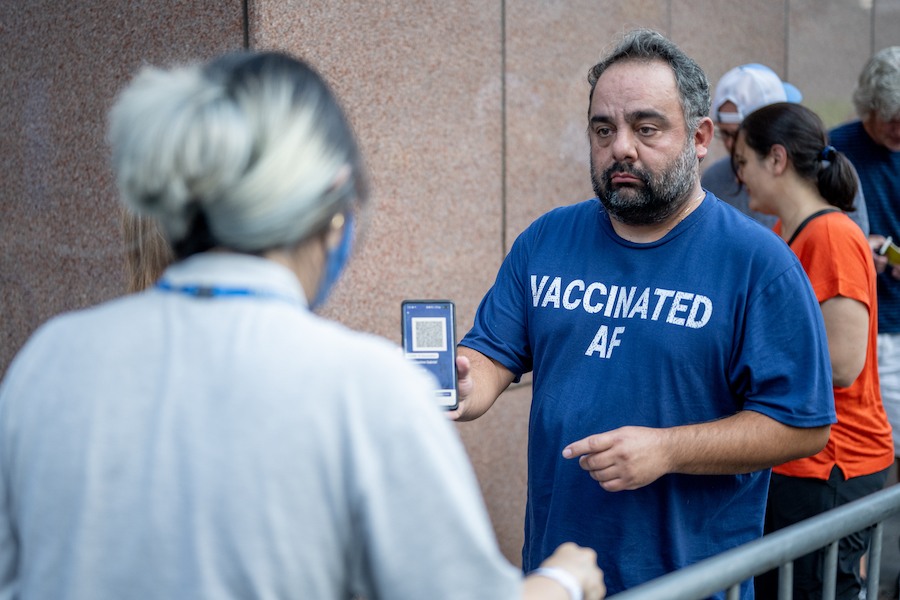 “It’s been going very well,” Union Transfer operator Sean Agnew told me earlier this week when I asked him if the new policy had elicited any confusion or controversy. “No one has freaked out. Not a single rude e-mail.”

For the Japanese Breakfast shows, all of which sold out in advance, the new policy meant contacting all of the customers who bought tickets so they didn’t arrive, those tickets in hand, only to be denied entry. Union Transfer offered customers refunds, whether they were unvaccinated or felt that producing their vaccine card was somehow a violation of their constitutional rights or just didn’t want to be crammed indoors with 1,200 other people. About 260 customers went the refund route and Union Transfer was able to resell all of those tickets.

“They only want to play to an entirely vaccinated crowd,” he says. All the shows in August and September will have one or the other of these policies in place. He’s taking a wait and see approach for October and beyond.

Agnew adds that when he was booking the venue, which just reopened on August 6th, he knew there was a good chance that proof of vaccination would become a thing, so he made sure to book acts that he imagined would err on the side of caution.

“We did not want to book shows for artists who would lean towards a ‘fuck your vaccine’ outlook,” he tells Philly Mag. “Just in case we would have to implement this. And I feel quite proud of that decision.”

On August 3rd, Ardmore Music Hall on the Main Line announced that it would be requiring all concertgoers to wear masks and that the club would allow artists to require proof of vaccination if they felt it necessary.

“We feel that it’s important to take proactive precautions to mitigate risk and promote fan, artist and staff safety,” Ardmore Music Hall wrote in a statement on social media. “Also, nobody wants to be forced to shut down again.”

The response to Ardmore Music Hall’s decision was mixed. There were plenty of fans in support of the decision. Some requested refunds. And some, well, some had things like this to say:

Are you also requiring proof of negative HIV test, or proof of TB vax?? or do you just randomly demand whatever private health information you want, whenever, from the public??

Guess I won’t be attending any shows…

I hope bands and artists start pulling out from venues that support this bs.

Back in the city, City Winery at Fashion District (née The Gallery) isn’t leaving the decision up to its performers. As of August 2nd, the venue, which has acts like Sandra Bernhard and Mavis Staples on its upcoming calendar, was requiring proof of vaccination or proof of a negative COVID tests at all of its events until otherwise noted.

And international concert-promoting behemoth Live Nation, whose Philly venues include The Met, The Fillmore and The TLA, is now reportedly allowing artists to set their own proof of vaccination policies for shows. On Wednesday afternoon, Live Nation announced that its huge Made In America festival, taking place in Philly this September, will require proof of vaccination or a negative COVID test. And although the festival is outside, all attendees must wear masks, thanks to a brand new City of Philadelphia mask mandate.

Meanwhile, down at South Philadelphia’s Wells Fargo Center, by far the largest indoor concert and events venue in the region, proof of vaccination is not required for any shows and there is no indoor masking requirement. Disney on Ice, a show targeted at children too young to be vaccinated, just completed a four-day run at Wells Fargo Center on Sunday. When Disney on Ice was originally announced in June, the venue indicated that masks would be required for all guests. But by the time Disney on Ice actually happened, that requirement turned into a mere suggestion.

“Seems like for a venue, show, concert or event where you are surrounded by thousands of people indoors, this would be a no-brainer,” Agnew laments.

Note: This article has been updated to reflect changing policies.