Plus: Milk + Sugar is going brick-and-mortar, Tiffin is going virtual, and Middle Child is making the crowds go wild for BLTs. 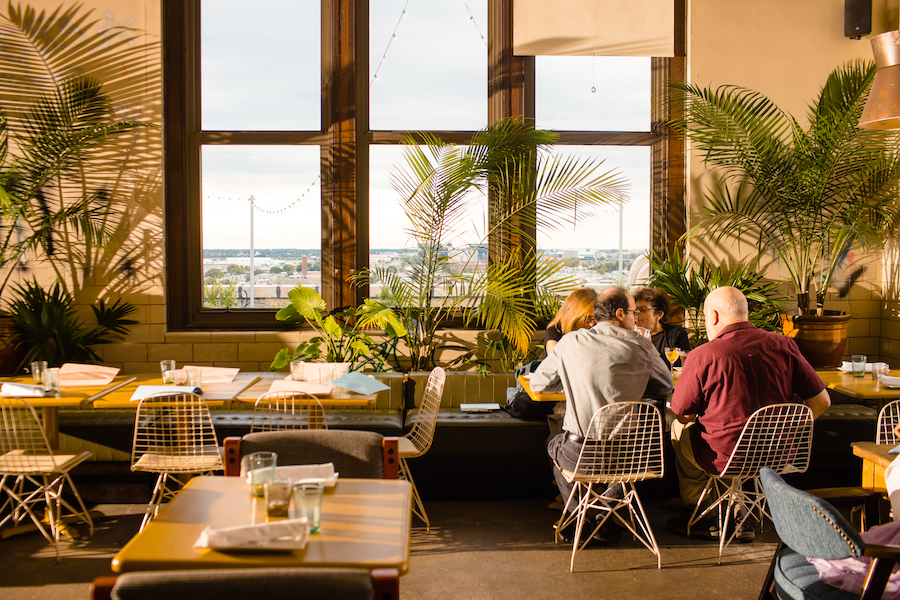 Irwin’s is one restaurant enforcing vaccine mandates in its dining room. | 2018 photograph by Ted Nghiem

Howdy, buckaroos. Welcome back to the Weekly Roundup.

We’re coming up on the dog days of August now. Under normal circumstances (remember those?), this is a pretty quiet time for the restaurant industry. Everyone just kinda goes about their business, taking advantage of the long summer days and warm nights while they can, cooking dinner and slinging drinks for whoever isn’t already at the Shore or headed elsewhere for vacations.

This year, though, things are weird. And the biggest news of the week? Vaccine requirements at restaurants. So let’s talk about that for a little bit.

Let’s start with some facts.

To begin, the pandemic isn’t over. Not here, not anywhere. I know things were looking good just a couple months ago, with people getting vaxxed, infection numbers dropping, and restrictions being lifted. But that’s over now. The Delta wave has put us back on our heels, and it sucks hard. We’re all exhausted. We’re all tired of masks and distancing, the worry and the fear. We’re all ground down by living in an environment where the background hum is disease and death.

But you know who’s even more tired of it than you are? Restaurant workers. Because not only were they on the front lines the whole time. Not only were their lives and businesses used as a political football by pretty much everyone. Not only were they subjected to abuse, insults, and generalized shitty behavior by entitled assholes insisting that their brunch reservations were more important than public safety. They died because of it. According to a study conducted from March through October of 2020 by the University of California, San Francisco, line cooks held the occupation with the highest increase in risk of mortality when you compared pandemic times to pre-pandemic life. Being a restaurant worker raised your risk of dying from COVID-19 more than being a retail employee or working on an assembly line. During the height of the pandemic, mortality increased more for cooks than it did for frontline health-care workers. Line cooks had a “60 percent increase in mortality associated with the pandemic,” according to the study. And as if that wasn’t bad enough all on its own, there’s also this:

Yeah, that’s pretty goddamn grim. Add to this the fact that restaurant employees (and small-restaurant owners) were pretty regularly fucked around by closures, mandates, changing guidance, political pressure, and legions of unmasked, unvaxxed red-hat assholes taking out their COVID frustrations on overworked and underpaid FOH staff, and it’s a marvel to me that I have any restaurants left to write about at all.

But restaurants are resilient. Restaurant workers are tough. And there were a lot of customers in Philly (and elsewhere) who tried to handle it all with some measure of grace. We — and I’m betting that I’m talking to pretty much everyone still reading this — desperately wanted restaurants (and their staffs) to make it through this mess. And we wanted to help as much as we could without risking any additional harm, so we masked up, did takeout and curbside, called in delivery orders to every favorite place as often as was feasible. There were losses, but it could have been worse. No matter what anyone did during the worst months, the industry was always walking a thin line, with potential disaster on either side.

And when things started looking up in the spring, restaurants all over the city welcomed people into dining rooms. They did what they’ve always done: brought us together and fed us, as safely as possible and as well as they could.

This time, restaurants aren’t messing around. No one wants to go back to lockdowns, layoffs, empty dining rooms, or anything of the sort, so owners are taking it upon themselves to protect their businesses, their guests and their employees. And we’re seeing the results of that: Martha instituted a policy requiring a vax for anyone wanting to eat inside or sit at its bar. Sally, Martha’s sister restaurant and winner of our Best New Restaurant award in this year’s Best of Philly issue, is following suit.

And a steady stream of other Philly joints are requiring you to show proof you’ve had your shots before you head inside. Hop Sing Laundromat announced early that it would be requiring vaccine cards (and IDs, as per normal) for anyone who wanted to come inside when the Chinatown bar re-opened, in addition to further spacing out its already widely spaced seating. Irwin’s is requiring all guests and employees to be fully vaxxed, calling it “an easy decision” on Instagram. Musi BYOB and Le Virtù are requiring proof for anyone who wants to come indoors. Kalaya is requiring masks inside and requests that any unvaccinated guests eat outside. Same with Cornerstone in Wayne when it reopens after summer break.

I am 100 percent in favor of all of these moves and hoping that other owners out there take these examples to heart and start doing the same. The restaurant industry has suffered enough. Their staffs have sacrificed enough. They have spent too much time scared and under threat already, so anything we can do to take some of the weight off their shoulders, I’m down for.

Cool. Stay home, then. Because you’re nothing but a vector now. And the consequential damage of your actions can best be limited by keeping you as far away from the rest of us as possible. I mean that literally. Your choices could kill you. They could kill those closest to you. And I don’t want to be anywhere near you.

The absolute least you should have to give up is eating indoors.

And now, in other news …

Mother-and-daughter team Marcy and Brittany Maldonado are bakers who made their bones on the mean streets of Philly, slinging cupcakes and sweets from their Milk + Sugar food truck. Sweet-potato cupcakes? Banana pudding? Pound cakes and brownies? They did it all.

Maybe you remember them from LOVE Park or Drexel. The big blue truck always stood out when it hit the streets. After riding the crest of the food-truck craze in Philly, the Maldonados transitioned into events, catering, business lunches, weddings and parties. They had a plan to open a shop of their own back in January of 2019, but then, well, you know …

The good news is, their cafe at 1501 South 5th Street in South Philly is now in soft-open mode, up and running with all the same cakes, cookies, brownies and cupcakes you remember. The new cafe is open Thursday through Sunday, 10 a.m. to 4 p.m., so go check ’em out if you’re in the neighborhood and in need of some cupcakes (and really, who isn’t?).

In completely opposite news, there’s also this: Munish Narula (who notably filed a class-action lawsuit against food delivery giant Grubhub in 2019) and the Tiffin crew are launching a new, entirely virtual concept with a no-fees and no-service-charge delivery model. It’s called Indian Chaat Factory, and it’s live now in South Philly and Mount Airy for testing before being rolled out across all nine Tiffin locations.

Here’s how it works: Chaat Factory has its own entirely plant-based menu, designed by chef Hari Nayak and inspired by favorite summer snacks and street foods served all across India. There are 14 items right now (everything from rajastani dahi wada and Mumbai vada pao served slider-style to masala idli and aloo tikki chaat with tamarind and mint chutney), and you order through the website. The menu will be changing seasonally and as the kitchen gets its legs under it. Right now, pickup is available at either of the two locations doing the testing, and you can get free delivery within three miles. Indian Chaat Factory will be serving seven days a week, from 11:30 a.m. to 10 p.m. Monday through Friday and noon to 10 p.m. on the weekends.

And Finally, an Important BLT Update From Middle Child

Look, I know this sounds weird, but if you can’t get an Uber on Tuesday, if your gym appears closed or you can’t find any of your co-workers on Slack, it might be because of the BLTs.

Nope. Not some weird new disease. I’m actually talking about bacon, lettuce and tomato sandwiches. Because over at Middle Child, they decided to add a special heirloom tomato BLT to their menu last week, and it seems like a large portion of the city just lost its whole-ass mind. 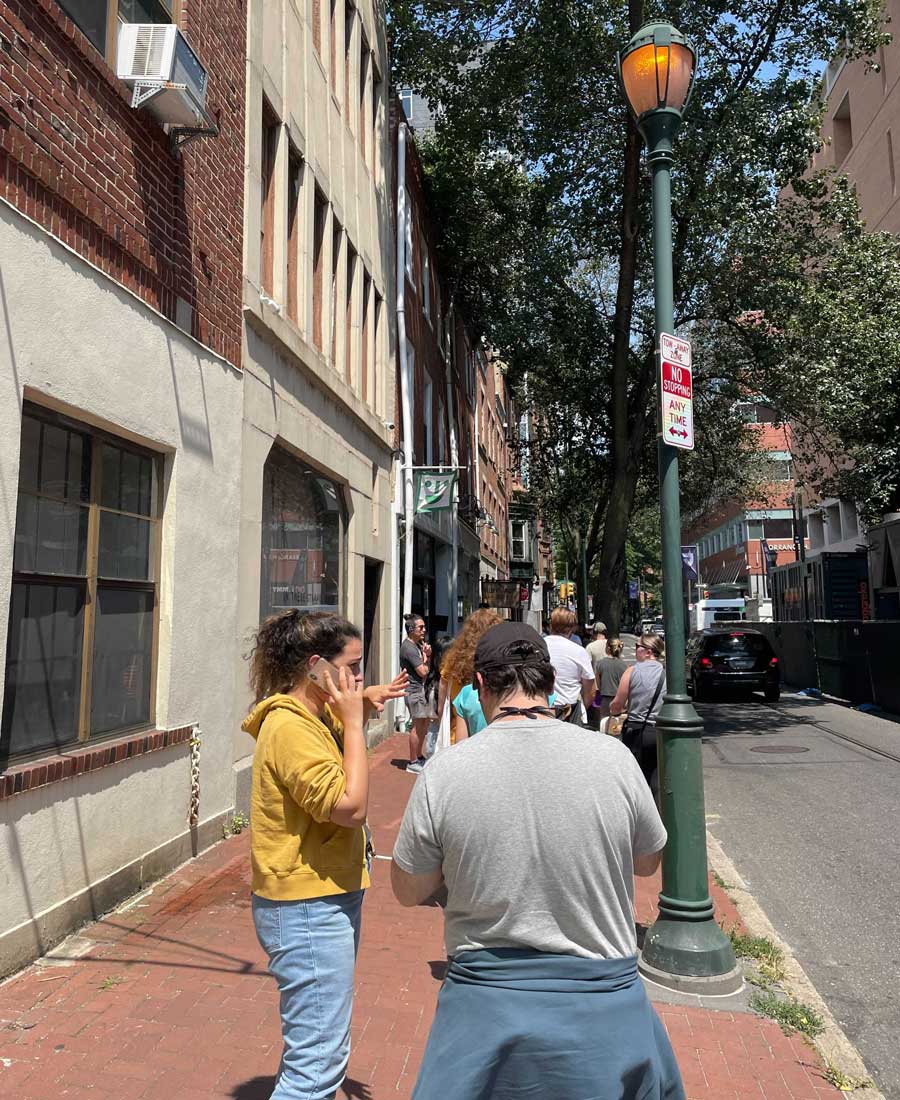 The line to order Middle Child during BLT season. Photograph by Caroline Cunningham

Seriously, there were lines down the block. That picture up there? That’s how it looked to those waiting to get their hands on one of these sandwiches. On Friday, the crew started selling them at 11:45 a.m., and they’d burned through all their supplies by 12:51 p.m. That’s just over an hour!

Middle Child took a breather over the weekend, just serving the plain old normal menu. But let this be your official warning: On Tuesday, the BLTs will be back at Middle Child, and people are already making plans to call in sick to work just to wait in line. They’ll camp out if necessary. It’s bonkers.

So make your plans. Show up early. (The sandwiches are available to walk-ins only; no online ordering.) Be patient. And keep your eye on Middle Child’s Instagram for pertinent updates.

Good luck, everyone. May the odds be ever in your favor.