The 2020 Pew Fellow explains the creative process behind his upcoming comic book and what it’s like being a Black writer in the competitive publishing world. 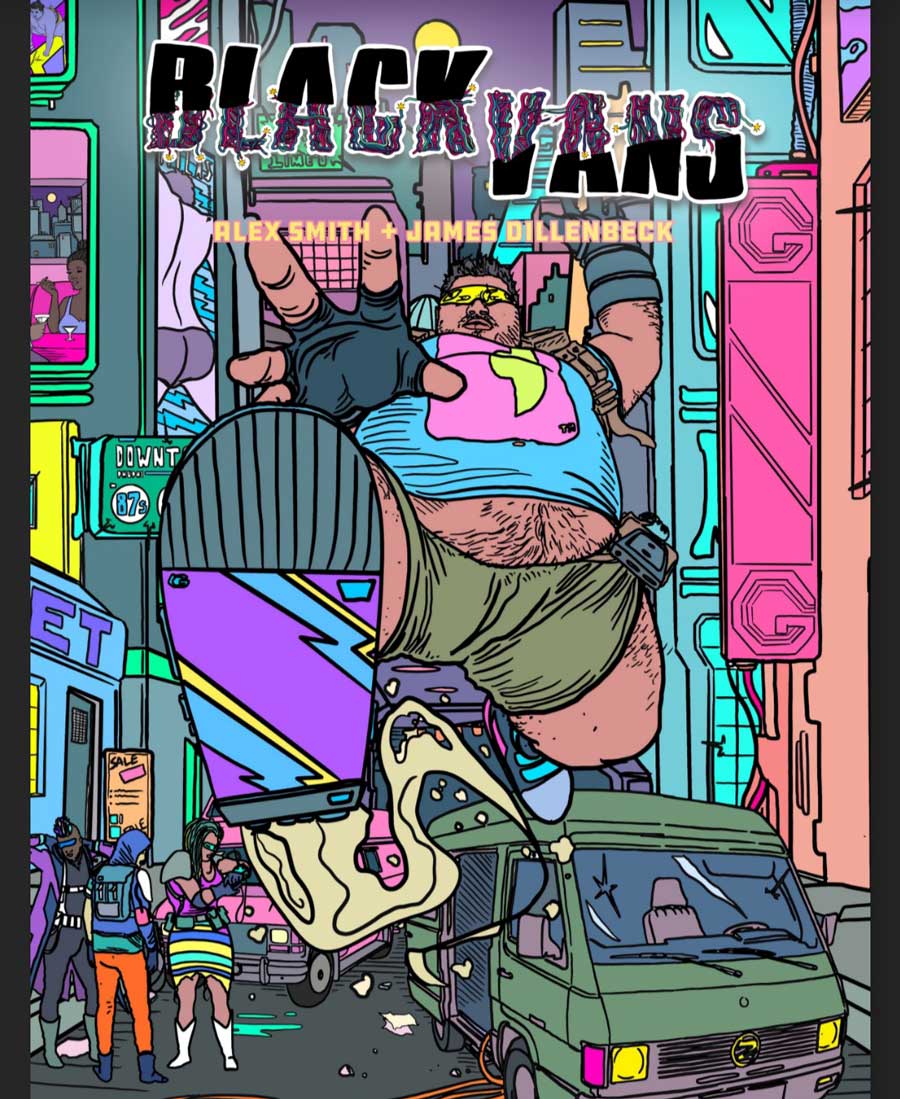 West Philly resident and 2020 PEW Fellow Alex Smith is one of the finest science fiction writers in the world. In 2012, he founded Laser Life , a queer sci-fi reading series, and co-founded Metropolarity, a speculative fiction collective. In 2018, Smith released Arkdust, a fantastic book-length collection of stories that lay out his unique vision of race, gender and class in the time of dystopia.

The latest project for Smith, a lifelong fan of and creator of comics, is a comic series called Black Vans, set in a world where an unlikely group of hackers has to figure out why the planet’s superheroes have gone missing. With colorful art by James Dillenbeck, Black Vans combines Smith’s fantastical storytelling style with visual and conceptual influences taken from ’80s sci-fi flicks like Blade Runner, Japanese tokusatsu live action, and beyond.

We spoke with Smith to get a sense of how Black Vans was created and the broad mash-up of pop-cultural influences that helped shape it. Black Vans has been fully funded on Kickstarter (more than $15,000 has been pledged thus far) and is slated to be released sometime in early September.

Philly Mag: Could you start by telling me about your earliest memory or engagement with comics and science fiction?
Smith: For sure. Well, my first encounter with sci-fi/comic-type elements was when I was very young, watching Battle of the Planets, a.k.a. Gatchaman, and then being obsessed with Super Friends and Star Wars. I had the toys, all the Underoos. I was immersed in the ’80s, when the Reagan administration relaxed the laws about making cartoons based on toys, so we saw this wellspring of capital-driven creativity just explode with Transformers, G.I. Joe, Thundercats, Centurions, Visionaries, Rainbow Brite, and Jem and the Holograms. I was obsessed with all of that stuff. The first comic book I ever read, though, was a copy of Daredevil, and it changed the way I perceived this stuff. That comic, I’d find out later, was written by Frank Miller, and it was dark, kind of scary, and featured way too many adult themes for my nine-year-old brain. But I loved it. 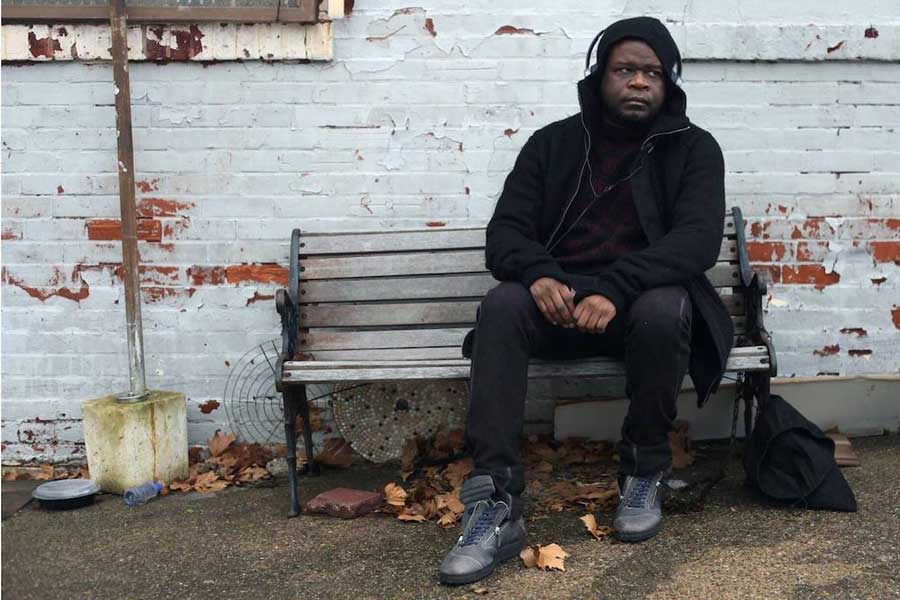 We’re close in age, and I grew up in that same period, inundated with that same cartoon/action figure/toy-related media. And I never really gave much thought to how the laws and the interests of capital made it all possible.
Oh, for sure. They weren’t playing around. Reagan was all about free-economy bullshit. The same free economy that devastated Black and queer communities gave us, like, SilverHawks. As soon as the laws were relaxed, these corporations went to work trying to find the next Star Wars. …  Some succeeded and others didn’t, but there was no way to put the beast back in the cage.

Early on during all of this, did you have a sense that comics were a medium that you could or wanted to explore yourself?
Totally. Once I get immersed in something, I immediately start making my own version of it. I have done that since I was a child. I found comics; I wanted to write and draw. I first heard house music and saw and felt the power of ushering moods on a dance floor; I wanted to DJ. First time I heard Nirvana, I wanted to be in a band. It’s immediate and visceral for me, which is probably why I’ve got my hand in so many different types of projects. My hope is that none of them come across as side projects, but that they all feel super dope and are among the best in whatever genre or medium they fall into. With comics specifically, I felt like I could do it at a young age, but when you’re older, you realize there’s this huge barrier to entry that is massively unfair. 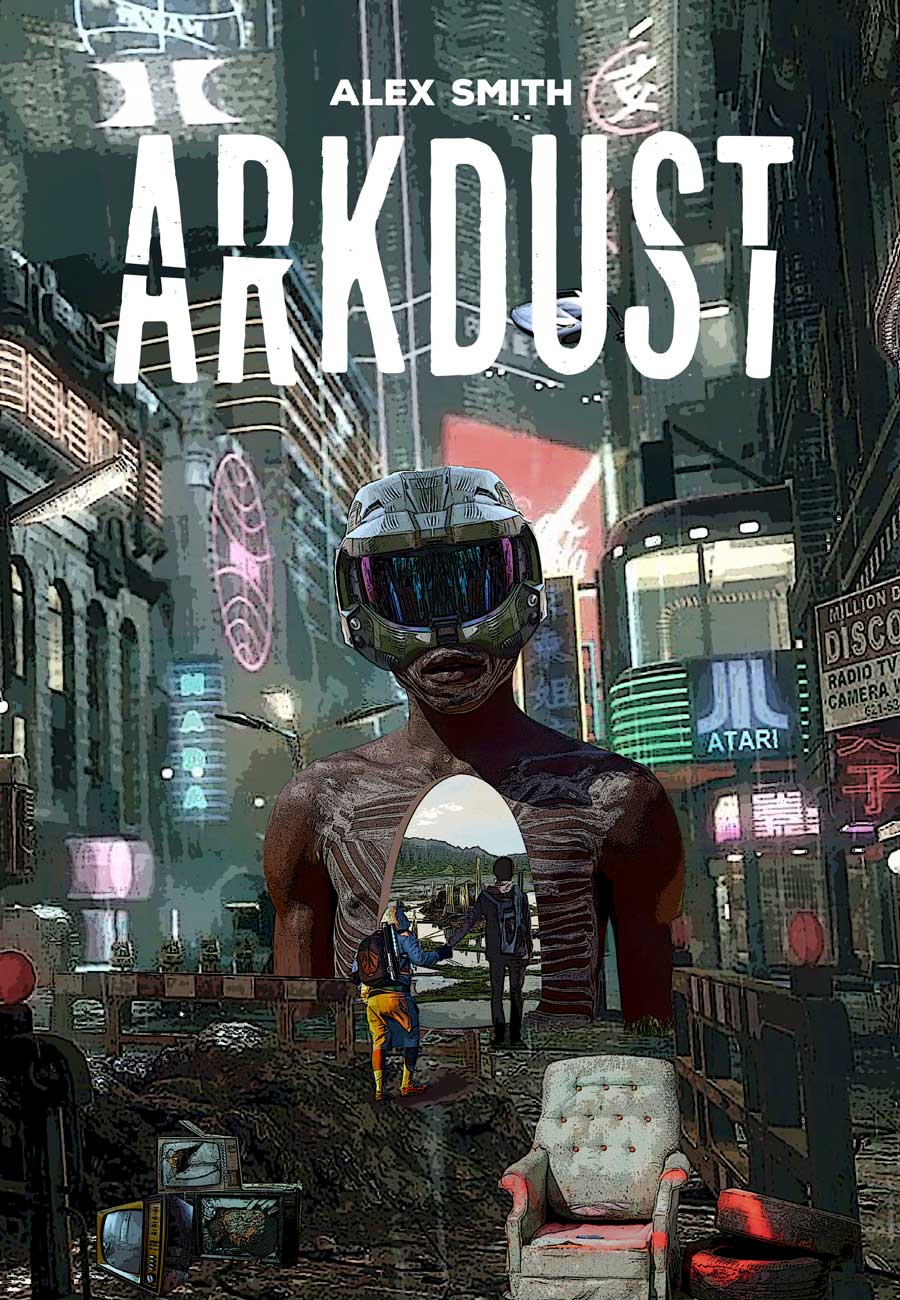 Right. It’s a huge, moneyed industry that I imagine is not very kind to Black writers specifically. If you had a chance to create a new character/story or take over one of the Big Two — Marvel and DC — franchises, would you be interested in that?
Yeah, it’s definitely not [kind to Black writers]. It has these moments where it pretends to be, but it’s a lot of “crabs in a barrel”-type situations that evolve from their so-called outreach. Like, you have to vie for these ridiculous mentor programs and whatnot. Meanwhile, a new white writer will appear every other month. It’s sad. In the ’90s, writers and artists faced a lot of in-person racism from editors, and the battle stories from these vets are overwhelming. Luckily, indie publishing has been helpful — not quite leveling the playing field, but giving us an alternative.

As far as the Big Two … so, I like the more esoteric characters. I’m not a huge fan of Spider-Man. I really don’t fuck with Superman and Batman and Iron Man like that. I liked Aquaman before they tried to make him all tough-guy. I prefer characters like Bronze Tiger from Suicide Squad, Mister Miracle and Big Barda from New Genesis, the Forever People, who are this group of weirdo kids also from New Genesis who do a lot of space-hopping — that kind of thing. I’d love to write Invisible Woman; she’s super powerful, and no one really explores that. I’d have fun playing in the crevices of the Marvel and DC universes, where you can get away with a lot more interesting storytelling and not be as beholden to whatever [DC or Marvel universe] crisis of the week is happening.

“We really wanted to show fat people, queer people, in heroic roles, not just as side characters. We think this is going to have a strong impact on so many communities.”

Since you brought up indie publishing, could you tell me a bit about Black Vans and how the project came about?
Black Vans is about a group of hackers, all LGBT and POC, who help superheroes with intel, behind-the-scenes analysis, communications … that kind of thing. Well, the superheroes start disappearing, and it’s up to the hackers to try and figure out what’s going on. It’s all a mishmash of the stuff I and artist James Dillenbeck are obsessive over: tokusatsu/sentai from Japan, ’80s toy-based stuff, Mad Max, Blade Runner, Moebius and Heavy Metal magazine — it’s all really obvious when you read it [laughs] … but with our own gay-ass twist on it!

We both bonded over our shared interests, and we both are super attracted to chubby and plus-sized men — bears, if you will — and that informed a lot of the choices we made for the characters. We really wanted to show fat people, queer people, in heroic roles, not just as side characters, and it’s been awesome, because just seeing some of the stills and pinups, folks from those communities have already felt empowered — and they haven’t even read the comic! We think this is going to have a strong impact on so many communities.

I approached James. I was super nervous, because his art is — it’s exactly what’s happening in my own brain [laughs], like, all the time, and some friends were like, “Yo, his art looks like Arkdust,” and I was like, “Yeah, I have to talk to this person.” He’s super friendly, and we gossip and talk about comics and boys and sumo wrestling and Michael Jackson, like, on a daily basis! [laughs] Collaborations can still happen; it’s amazing. 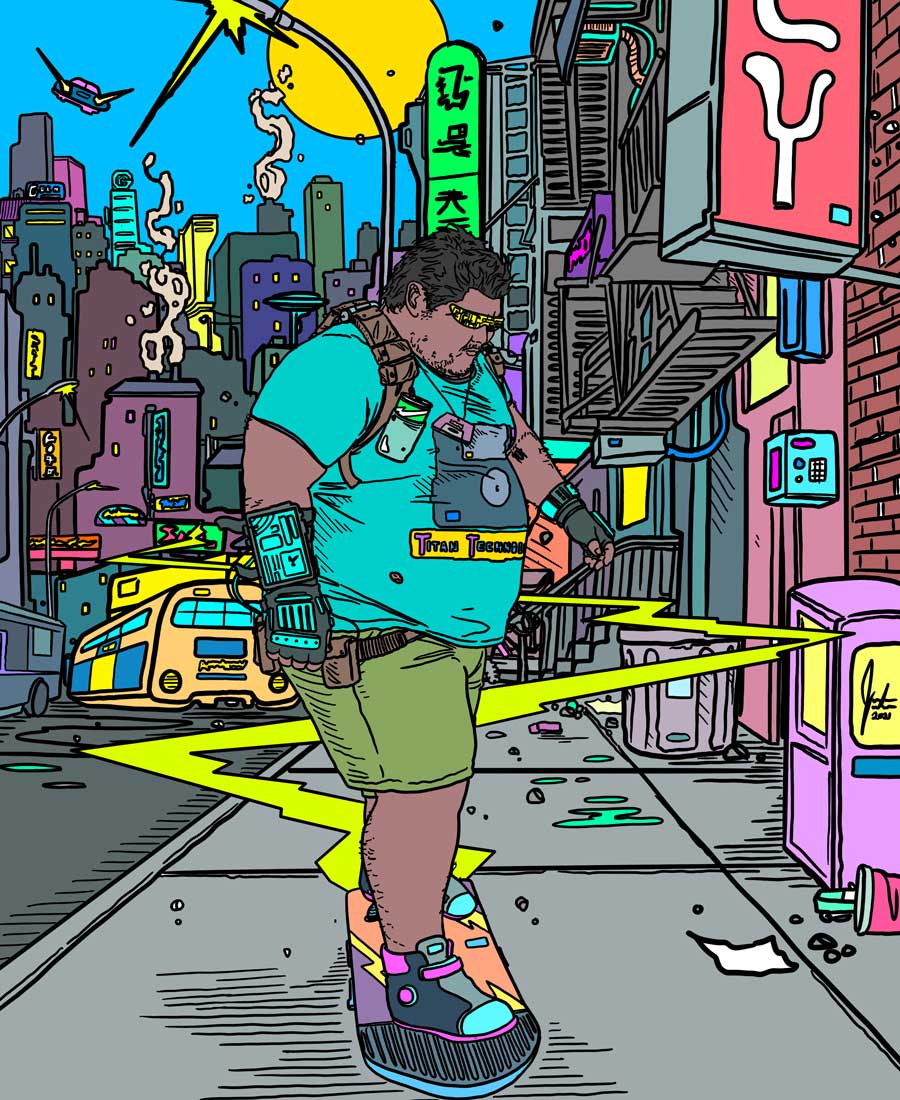 An illustration from Black Vans by James Dillenbeck

It’s lovely that you and James found each other and established that kind of rapport and this shared set of interests and aesthetic touchstones. Could you walk me through the process of you and James putting it all together?
Yeah, it’s rare in this age. I get it; a lot of people want to be paid up front for their work, but the best work like this comes from collaboration and the patience of knowing that something powerful or transcendent can come as the result of a true, friendship-forming collab.

It’s been a process, though. Basically, I sent James three different story prompts and had him choose which one he likes best. We both agreed Black Vans would be the best fit. I created the world, the characters, sent him bios and specs sheets, and then he designed characters based on them. We went back and forth about tweaks, and the main cast was born. I wrote a script, and he drew it from the script. It was his first time drawing from someone else’s script, which really kind of shocked me. But he absolutely knocked it out of the park.

We brought in Steven Arnold from Heel on the Press. Steven is a talented artist and writer and filmographer in his own right — he did the lettering and the layout and was the liaison for the printer. His work really makes it. The lettering is like sound in a movie. You can do everything right, but if the lettering and layout aren’t good, much like sound in a movie, it’s gonna look/sound like trash, and people are gonna think it’s amateurish, so we have greatly valued his work.

Word! That’s incredible, and the book looks gorgeous. It’s such a strange but beautiful and colorful world that y’all have created.
Wow, thank you so much. I hope it’s not too weird [laughs]. … I think of myself as my primary audience member first when I create, so I’m aware that things I create may feel alien to people. But playing in these worlds keeps me alive — keeps me hopeful for the future.

Speaking of audiences, how have folks been responding to the Kickstarter?
Folks have been super supportive, beyond belief. We wanted to keep it as low-stakes and accessible as possible, and I’ve been grateful that folks have gotten behind it. Mostly non-comic-book sites have retweeted and given us space, like Get Better Records, Silence Is Death records, Fat Futures Collective, and this fashion mag for plus-size men, Chubstr. It’s been support from outside the comics community, mostly — folks who see themselves in the characters and who can understand its impact. Some indie comics sites have been huge, too, like Shawn Alleyne’s Xion Network, Blakpulp and Sequential Philly. It definitely helps that we have strong themes, strong community ties, and what I think is something really empowering to offer.