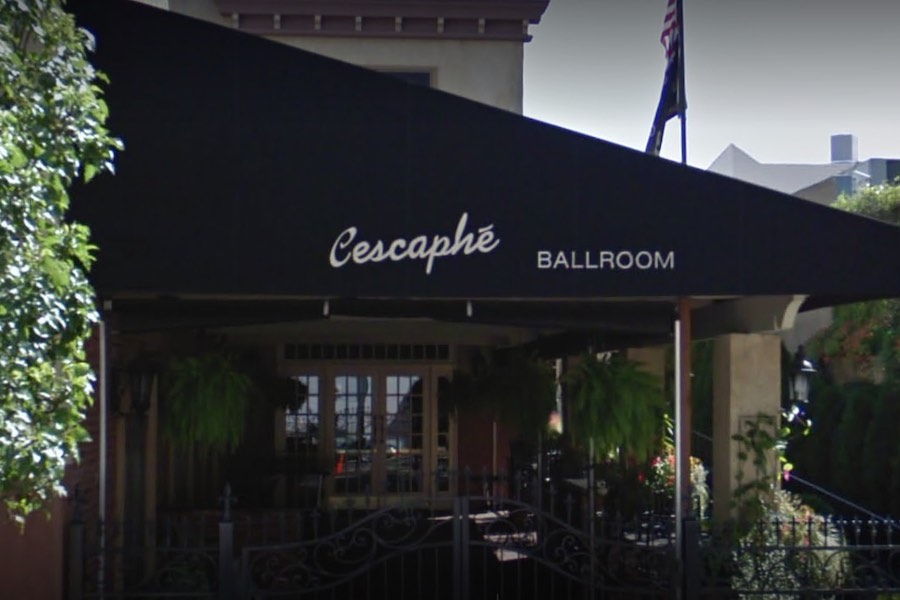 Former signage at Cescaphe Ballroom on 2nd Street. The Philadelphia wedding-planning company finds itself the subject of a lawsuit over its wedding deposit refund policy amid COVID. (Image via Google Maps)

When it comes to the wedding business in Philadelphia, there’s no bigger player than Cescaphe. The locally based wedding and special-events company hosts glitzy ceremonies and receptions for anywhere from 150 to 600 guests at its six venues all over town, from the Lucy on South Broad Street to Water Works in Fairmount Park to its flagship location, the Cescaphe Ballroom in Northern Liberties. But now, Cescaphe finds itself the subject of a class-action lawsuit filed over the company’s refund policies amid COVID — an issue that has plagued the wedding and event-planning business all over the country for many months.

In October 2018, back when we were all going about our “normal” lives, Michael Randall proposed to Molly Moskowitz, his college sweetheart, at a Halloween party where they were dressed as Game of Thrones characters. Moskowitz said yes, and within a week or so, the pair had booked a tented outdoor wedding with Cescaphe at Water Works, “site of many of Philadelphia’s grandest affairs,” as the company describes it. The 200-plus guests would be treated to a champagne bar with fresh raspberries, chilled seafood and sushi stations, a “Viennese dessert display,” and butlered hors d’oeuvres, among other “lavish appointments.” The couple paid a $5,000 deposit.

There was just one problem: the wedding date. Moskowitz and Randall were to celebrate their nuptials on June 12, 2020. But it turned out that nobody was having a 200-person wedding in Philadelphia in June of 2020. The COVID vaccine had yet to be deployed, and a 200-person outdoor gathering (or even a much smaller one) would have been illegal. 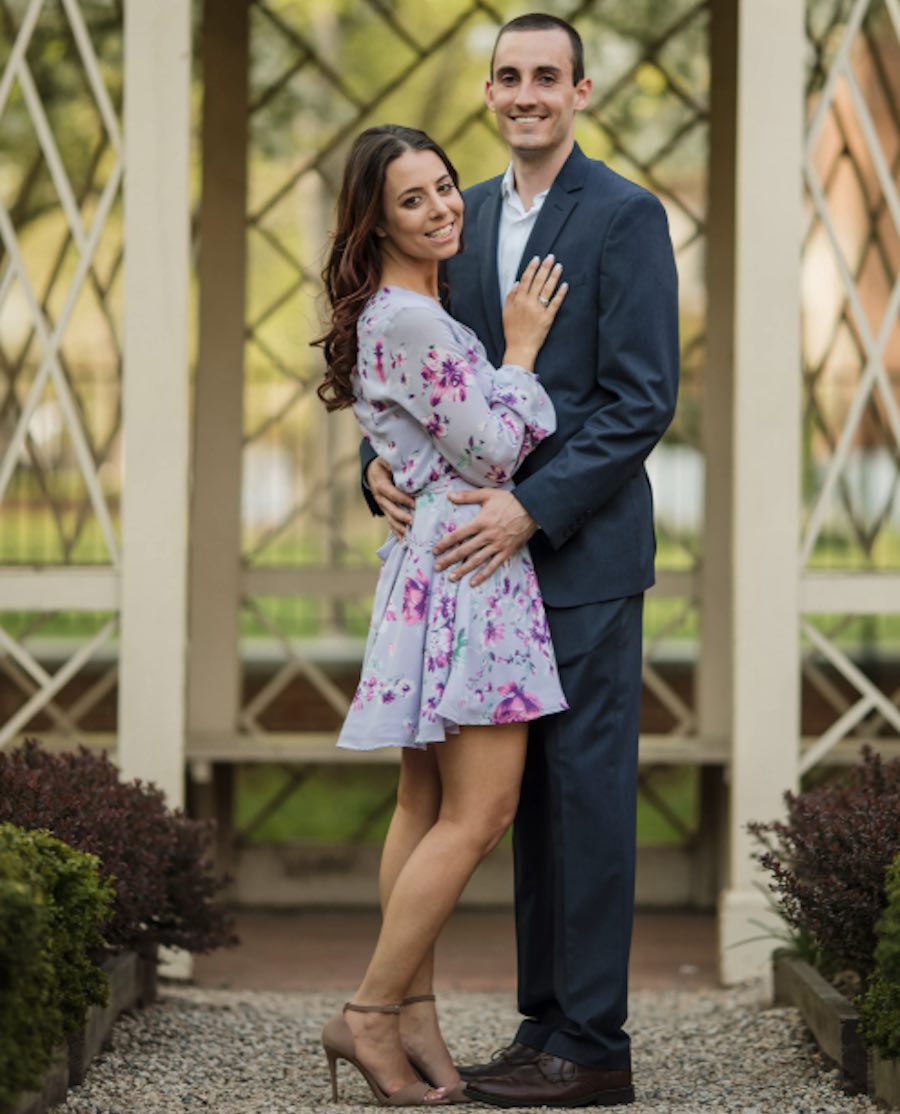 According to the allegations contained in the federal class-action lawsuit recently filed by the couple against Cescaphe, this is when things started to go downhill. The lawsuit claims that Cescaphe engaged “in fraudulent and deceptive conduct by misconstruing and misstating the terms of the contracts” in an effort to avoid returning their deposit.

But the agreement also included the force majeure language found in most contracts — a clause that can be used to release all parties from an agreement in the event of an “act of God” or other extreme circumstance that makes it “illegal or impossible” to fulfill said agreement. As Moskowitz and Randall saw it, the deposit should have been refunded, since it was impossible to have a wedding of any reasonable size on the date Cescaphe had guaranteed them.

According to the lawsuit, though, Cescaphe allegedly proceeded to claim that the $5,000 deposit wasn’t a deposit at all, in spite of the fact that the contract, which Philly Mag has reviewed (along with several other contracts, which read the same), literally called it a “deposit.” Nor was it to hold any date, Cescaphe claimed, in spite of the fact that the contract said otherwise; it was an “event planning fee” that the company could keep. In the lawsuit, the couple contends that Cescaphe pressured them and other couples to reschedule their events for later dates, telling them that available dates were growing slim and that they might be forced to have a weekday wedding.

In the early days of June 2020, in response to this pressure and Cescaphe’s position that it wouldn’t be returning the $5,000, Moskowitz and Randall chose May 7, 2021, as their new wedding date. Due to availability issues, their wedding was relocated from outdoors at Water Works to indoors at Cescaphe Ballroom.

In September 2020, the couple decided that wasn’t going to work, either. They then canceled their Cescaphe event. “We have made the difficult decision to postpone our wedding again,” the couple later wrote in a note to guests. “The restrictions in the city of Philadelphia have not lifted enough yet for us to have our wedding.” (It should be noted that May 7, 2021, wound up being prior to the city lifting the restrictions that would have allowed an event like their wedding to move forward. A non-Cescaphe wedding reception will now be held at the Bellevue in June 2022.)

The couple has tried to get Cescaphe to return the $5,000, but to no avail. On May 25th of this year, the couple’s attorney, Ken Chotiner, fired off a letter to Cescaphe insisting the company hand over that $5,000. Cescaphe’s lawyers shot a letter right back, saying, “There will be no refund.”

In the letter, the lawyers claim that Cescaphe did a bunch of work for that $5,000, including conducting an in-person meeting with the couple to go over menu options, making arrangements for a block of hotel rooms, and “floral coordination” with popular Philadelphia floral design company Beautiful Blooms.

About a month after Cescaphe’s lawyers sent that letter, Moskowitz and Randall filed their class-action suit in Philadelphia’s federal court, accusing Cescaphe of fraud, breach of contract, and violations of Pennsylvania’s consumer protection laws. They filed the suit on behalf of themselves and what they claim are more than 1,000 other Cescaphe clients potentially affected by the company’s acts, making the amount in controversy possibly $5 million or more.

On June 28th, just four days after the suit was filed, Cescaphe’s lawyers sent a second letter to Chotiner. In that letter, the lawyers accuse Chotiner of filing the lawsuit in an effort to “harass” and “strong arm” Cescaphe into returning the $5,000. The letter calls the suit “frivolous” and states that the attorneys intend to seek sanctions against Chotiner for even filing it.

The letter also argues that federal court isn’t the proper place for the couple to air their grievances, referring back to that original agreement they made with Cescaphe in 2018. That contract contains a standard but growingly controversial forced arbitration clause, which says that any disputes must be resolved through arbitration, not through lawsuits.

But contracts and arbitration agreements aren’t always as cut-and-dried as they might seem, and it will be up to the judge in the federal suit to rule on a motion filed by Cescaphe’s attorneys to dismiss the case and compel arbitration. On Tuesday afternoon, Chotiner told Philly Mag he intends to file a response in court that will explain why the arbitration clause is unenforceable.

Meanwhile, six other couples in a similar position to Moskowitz and Randall recently took to Philadelphia’s Common Pleas Court to ask a judge to allow them to combine their individual arbitration cases over Cescaphe wedding deposit refunds, along with refunds for other types of events. That action was filed by Penn Valley attorney Todd Lasky, who, along with his wife, is also a plaintiff in the case.

In that court filing, which pointed out that Cescaphe received more than $4 million in PPP funding over the past year, the couples argued that with amounts in dispute ranging from $5,000 to $6,000 per couple and an estimated cost per couple for arbitration representation of $2,500 to $3,000, it wouldn’t make financial sense for them to pursue arbitration individually if the cases were heard separately.

The filing also alleged that Cescaphe has granted refunds in select cases, but only to couples who agreed to sign confidentiality agreements. (When asked for comment on this particular allegation, a Cescaphe spokesperson didn’t address it specifically but wrote in response: “Our policy has been consistent for years. Our earned planning fee is only returned in extenuating circumstances like a death, a severe illness or military deployment.”)

Just as they did in the Moskowitz-Randall case, lawyers for Cescaphe stated in court documents that some or all of the couples seeking relief in Common Pleas Court had already received services for their $5,000 or $6,000 deposits.

On Monday, the judge hearing the request to join the arbitration cases denied it. The federal case continues.

“As the region’s largest wedding provider, we continuously strive to create and deliver dream weddings and events,” wrote a publicist for Cescaphe in a statement to Philly Mag. “Our team has worked tirelessly with all individuals impacted by the pandemic to develop the best solutions for them – rescheduled weddings, micro weddings, or other future events. It is disappointing to see less than two percent of our impacted customers try to take advantage of a small business. An objective review of the facts shows that we acted honorably and justly toward our customers – as we have for the last 20 years and will continue to do.”