Nic Esposito spent years in city government trying to reduce trash. Now on the outside, he tells us why the Streets Department can't seem to take care of its most basic responsibilities. 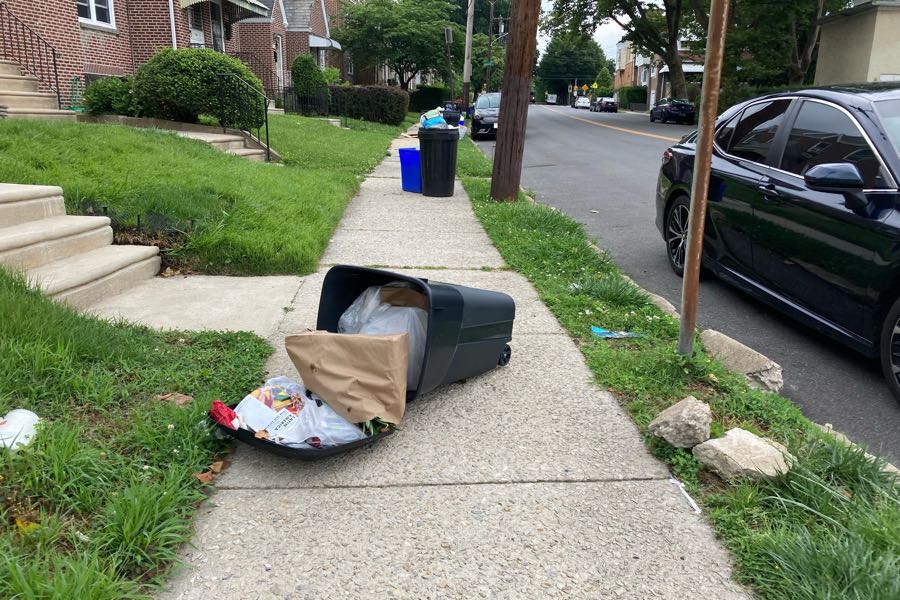 A scene from Overbrook, where Philadelphia trash pickup is currently one day behind schedule. Staff photo

Chances are you’ve been engaged the past few weeks in a game of peekaboo with your trash bins, checking each day to see if they’ve finally been emptied. Chances are they haven’t. This trash delay was understandable enough last spring, when the pandemic had just started. Workers called out sick, and as people stayed at home, trash volume skyrocketed.

But it’s been 15 months since then, and the city still can’t manage to pick up the trash on time. If neighborhood Facebook groups — the closest barometer for the collective psychology of the city — are any indication, the situation has deteriorated. In South Philly, people are complaining of flotillas of trash bags on flooded city streets. In Roxborough, residents report they’re getting fined for putting out their trash on trash day. One Philly Mag staffer got fined for having trash on the curb a day after the city failed to pick up the trash. Another recently went on vacation for a week, only to discover that the recycling still hadn’t been collected upon her return.

The Streets Department has been sending out press releases — never a good sign — apologizing for the delays and giving as excuses, among other things, the Memorial Day holiday and the fact that staffing shortages remain. It suggests residents take their own trash to one of the city’s sanitation convenience centers.

Nic Esposito, the city’s trash czar until last year, when his Zero Waste and Litter Cabinet was gutted by the Kenney administration amid pandemic-induced budgetary cuts, thinks those excuses are … well, trash. We caught up with Esposito, who now runs Circular Philadelphia, a waste reduction and reuse advocacy organization, to hear an insider’s perspective on what’s so wrong with the Streets Department.

For the average citizen, it’s hard to understand why trash isn’t getting picked up. Compared to other issues the city has to deal with — homicides, schools, opioids — it would seem to be easy to just hire enough people to pick up the trash. The city has said, We’re not picking up the trash because we can’t hire enough people, and because the pandemic is causing too much trash to accumulate. Is it really that simple? Or is there more to it?

It isn’t a simple process. There are a lot of moving pieces to managing waste collection for 585,000 households. The first thing I’ll say is, there are a lot of working-conditions issues with sanitation workers. It’s not an easy job. And if there’s any group of people that needs to be treated better, it’s our sanitation workers. It’s also indicative: If you can’t get people to come to work for you, there’s a management problem, right? Why do people not want to come and do this job? There are sanitation workers all over the country, private and public. It’s still a desirable profession. It’s just a matter of where you want to work. And I think you have to ask that question: Why does Philadelphia have such a hard time retaining collection people?

In a recent op-ed, you wrote, “I can confidently say that it’s the system, and not the residents setting up the trash or the sanitation workers picking it up, that is to blame.” You mentioned how the Streets Department isn’t using nearly enough technology to guide how it picks up trash. Walk me through how trash actually gets collected right now and what’s wrong with that system.

Trash is collected on a route. You have these static routes that have been created. Sometimes they’re amended, like if there’s development that has happened. The Streets Department does follow tonnages and things of that nature, but it’s not done in real time. Post-collection, the truck goes to a landfill or an incinerator where it’s weighed, and that data is captured. The data comes back downtown and gets put into a computer spreadsheet. But it’s not connected to any sort of GPS routing. With smart routing, you can take data and say, “How much tonnage is on this route? Do we need to add or shorten the route? Do we need to change the routes?” There are plenty of companies that do that. I understand there was some exploration of smart routing technology, but it’s never really been employed. This is the sort of thing workers should look at and say, “Wow, this will make our jobs so much easier on our routes.” They don’t see it that way, and it’s not their fault. People don’t always trust tech and sometimes need to be made to trust it. Streets can’t do that, which is why they have all that mistrust between labor and management.

That’s what’s funny about the excuse of “It’s staffing and the pandemic.” If that’s true, that’s the easy fix, compared to what you’re talking about at the systemic level — and the city can’t even do that.

That’s a very good point. You already had a bad situation with labor and the sanitation workers, but you had a year to figure it out. How is this happening again? How are you caught off guard by a holiday that happens every year at the same time? And “increased tonnages”? From what? Most Memorial Days, people have parties at their homes. It’s not like it’s any different from past years. It’s these weird excuses they keep using and expecting us to just be like, “Okay.”

It was understandable for there to have been a lag in pickup in March and April of 2020, during the height of the pandemic. But for much of the past 12 months, trash pickup has more or less been back on schedule again. So the question is: What changed?

In my neighborhood, in Kensington, it’s very common that we’re a day behind. That has not just started happening. It’s been the past three months, at least. It’s surprising when they’re picking up on time. And then they’re combining recycling and trash in trucks. So I’m interested: Where is that happening?

Last year, you wrote an article talking about the solar-powered “Bigbelly” trash compactors on city streets, which have the benefit of alerting the department when they’re full. But you say the city doesn’t actually use that information; it just has trash collectors go on their usual routes instead of prioritizing the compactors that are full. Another strange decision that comes to mind is when the Streets Department tried using leaf blowers in place of street sweeping, which had the predictable result of blowing a bunch of trash and dirt into the air. You’ve worked for the city, so I have to ask: Is the Streets Department really as inept as it seems?

[Laughs.] I’ve tried to be very mindful of this. But they’re proving it, day to day. It’s not just me giving my opinion. The fact that these problems continue to persist is a management issue, and Mayor Kenney owes us explanations. I know he’s got lot on his plate. But I’m no longer just a former employee, nor was I ever. I’m a resident of this city. I live in Kensington; I’m raising kids here. I don’t want to walk out of the house and have two-day-old trash and flies all over. We just owe our city better. And I would say that yeah, given the track record, I think it’s incompetence that they just cannot run trash for a city of 1.6 million people. And look, does underfunding happen? Yes. But they’re about to put forth a $5.2 billion budget. When you compare that to cities of our size, it’s not that underfunded; the issue is how the money’s being spent. I’m starting to lose faith in the argument that we don’t have enough money. I just think it’s mismanagement — old, outdated systems that don’t rely on technology and nobody feels the need to change.

I wanted to ask you about the budget. The city got $1.4 billion of federal pandemic aid, and in the newest budget, the Streets Department funding is up $24 million, to $265 million. Will that solve the problem?

From my experience, everything is very reactive. It’s like, More trash? Send more people to the route. Everything is happening after the fact rather than being proactive and preventive. Seeing the Zero Waste and Litter cabinet being cut — this was longer-term planning. You don’t cut long-term planning — it’s what helps operations in the now. Hearing them say things like “increased tonnages,” it’s like, yeah, we need to reduce waste in city. That’s what the whole Zero Waste initiative was doing. And now it’s severely underfunded. They’re complaining about the problem of increased waste but not doing anything about it. That’s why I’m excited about Circular Philadelphia; it’s an actual thing that can make the city run better. Obviously, the city sanitation department should be involved in these conversations. And workers, too. But how can you involve the department in these conversations when they can’t even pick up the trash on time? You can’t even get the core mission right, and you’re not investing in longer-term planning.

Do you feel any sense of relief that you were relieved of your duties as trash czar, if only because you can now pursue the same goals unburdened by the institutional baggage of the city?

I’m proud of all the work we did. The fact it went away was mind-boggling. It doesn’t make any sense. So yeah, those conditions are hard to work in — you’re fighting an uphill battle trying to change bureaucratic systems. But I also want to make clear: There are a lot of incredible people working for the city in lots of departments, even in the Streets Department. Kenney needs to step up and get back to what he promised. That’s why I joined the administration — because it believed in good ideas, and making the city better was actually something that would be given political capital. What we’re seeing now, in my opinion, is a lack of that support. There’s an actual example of what’s happened: Look, our trash can’t get picked up on time! Recycling is not managed at all. Potholes are all over the street. The proof is: Walk outside and look. Just exist in the city for a little while and check it out.