Ray Didinger’s New Book Is Packed With Great Philly Sports Stories. These Are Five of Our Favorites

Father's Day gift alert! From Mike Schmidt's shrugs to Darryl Dawkins on the Declaration of Independence, the legendary Philadelphia sportswriter's Finished Business is packed with anecdotes from our city's complicated sporting history. 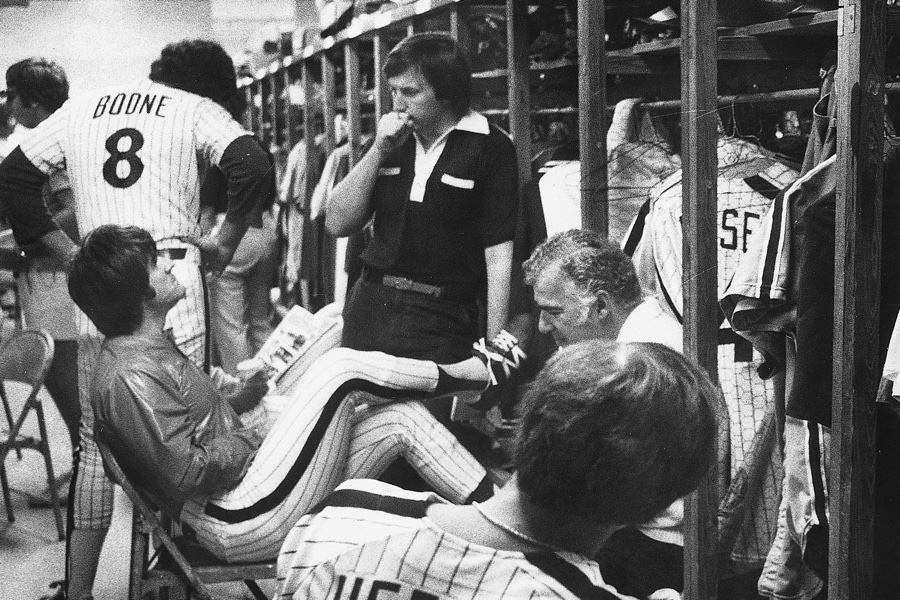 Ray Didinger, the doyen of Philly sportswriters, has a new book out: Finished Business: My Fifty Years of Headlines, Heroes and Heartaches (Temple University Press). If you’re still searching for the perfect Father’s Day gift, allow us to suggest you buy this! Sports fans will find all the usual suspects — Allen Iverson, Larry Bowa, Charles Barkley, Philly Philly — along with lesser-known supporting staff and would-be stars. Didinger has always been a master at capturing the ways in which sports stand in for bigger and greater things in life — the civil rights struggle, the Cold War, this city’s everlasting shoulder-chip. He takes us with him behind the scenes of Philly’s greatest sports triumphs and, um, disasters. (The chapter on Didinger’s three months on the road with the heroes of pro wrestling is a particular hoot.) Didinger will be signing copies of his book on Thursday, June 17th, at 5 p.m. at the Barnes & Noble in Broomall, and on Saturday, June 19th, at 2 p.m. at the Barnes & Noble in Wilmington. Meantime, here are five anecdotes we found particularly amusing and enlightening out of the trove of literally thousands studding the book.

Tose, But No Cigar

Didinger devotes a surprisingly touching chapter to Leonard Tose, the multimillionaire owner of the Eagles who gambled away his fortune and damn near cost the city the team via a plotted move to Arizona. When Tose died, broke and lonely, in 2003, former Eagles coach and close friend Dick Vermeil eulogized him as “an original piece of work,” which is pretty damned apt. His tenure with the team, from 1969 to 1985, was a roller-coaster ride. Didinger recounts a press conference Tose held at the end of 1972’s 2-11-1 disaster:

When the ’72 season ended, Tose fired [head coach Ed] Khayat and his entire coaching staff. [Pete] Retzlaff stepped down as general manager. The highlight of the press conference was Jack Zilly, the special teams coach, walking behind the podium where Tose was speaking, surveying the luncheon buffet, and carrying away an entire cheesecake. It was like a raised middle finger to Tose, the media, and Philadelphia in general.

“Dick Is Killing Us”

Tose eventually took a flier in 1976 on unproven UCLA coach Dick Vermeil, who’d just led his college team to a win in the Rose Bowl. Besides dooming Philadelphia to decades of Blue Cross commercials starring Vermeil, the hire introduced a whole new level of intensity to players and staff. Vermeil pushed the Eagles and himself so hard that he retired prematurely in 1982, admitting he was “burned out.” In the meantime, though, there was suffering:

The camp schedule was particularly hard on the assistant coaches. … One day, I was interviewing backfield coach Johnny Roland after lunch. We found a bench outside the dining hall, and five minutes into the interview, Roland was sound asleep.

I didn’t know what to do. I didn’t want to wake him, because it was obvious the poor guy was exhausted, but at the same time, I couldn’t very well leave one of the team’s coaches sleeping on a bench like a homeless person. …

Finally, I nudged him. His eyes popped open. He looked around and realized what had happened. He was embarrassed.

“How long was I asleep?” he asked.

Roland picked up his playbook and headed for the dorm.

Didinger delves deep into the enigma that is Michael Jack Schmidt and why it is that the player who might be the greatest Philly athlete of all time (Didinger claims he is) never really managed to connect with the fans. He points to Schmitty’s perfectionism and natural inscrutability, but it didn’t help that the third baseman once told an interviewer the city’s faithful partisans were “uncontrollable” and “beyond help.” Didinger recounts a frustrating vignette with the 12-time All Star, Hall of Famer, and 10-time Golden Glove winner:

He would hit a game-winning home run and then stand at his locker and discuss it like “What’s the big deal?” He would be standing right in front of you, but emotionally it was like he was on the other side of a moat. He was so aloof that Daily News columnist Bill Conlin called him “the Sultan of So What?” I once wrote that he led the league in Shrugging Percentage.

“What’s that supposed to mean?” he asked.

I tried to explain. Shrugging, you know, like you just shrug it off.

Didinger, who’s married to former Philly Mag restaurant critic Maria Gallagher, tells great tales and drops in fascinating tidbits of insider gossip. (Did you know Andy Reid’s dad was a Hollywood set designer?) Yet he’s charmingly self-deprecating; this may be a memoir, but it’s never all about him. Still, he isn’t above using the book to set a few things straight, including what he considers the misappropriation of a favorite bon mot of his by a New York competitor during the 1977 Phillies season:

Luzinski and Schmidt combined to hit 77 homers. McBride batted .339 after joining the team in midseason. They were a superb defensive team, with Gold Glove winners Schmidt, Bowa, and centerfielder Garry Maddox. That was the summer I wrote the line, “Two thirds of the earth’s surface is covered by water, the other one third is covered by Garry Maddox.” The line has since been widely attributed to Mets broadcaster Ralph Kiner, but he was merely repeating my line on the air.

Didinger is such an affable everyman that readers may be surprised to learn how often he ticked off the athletes, coaches and owners he covered. Tose didn’t speak to him for five years after the writer penned a Daily News column sharply critical of the owner’s scheme to relocate the team. Didinger once got thrown out of the Phils’ clubhouse after getting into a shouting match with Larry Bowa. Vermeil chewed him out in front of players in the training camp dining hall. On the other hand, Didinger came after loony former Phillie Lenny Dykstra on-air once for owing him $7,000. Through it all, R Diddy must have kept notes, because nothing seems to have escaped him. Here’s a throwaway bit about Darryl Dawkins, the six-foot-11, 280-pound behemoth drafted by the Sixers right out of high school in 1975, who liked to refer to himself as “Agent 0014” because “I’m twice as bad as 007”:

He was a big kid, really, guileless in many ways. Once in an interview, he was quizzed on what he knew about Philadelphia. He was asked if he knew where they signed the Declaration of Independence. Of course he knew.