The Pandemic Forced Us Apart. Will Philadelphia Ever Fully Regain Its Intimacy?

What happens to a city when you can’t touch it? 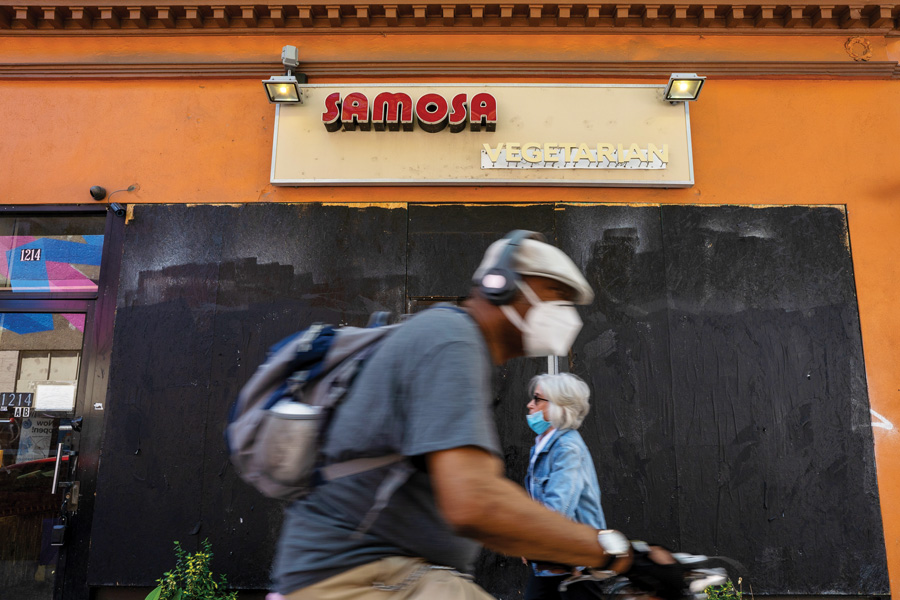 Over a year later, Samosa Vegetarian is still shuttered. Photograph by Drew Dennis

On March 10th of last year, I hustled out of the crowded jury assembly room in the Justice Center. Standing in front of the old City Hall Annex, I called my dad, then 82, to beg him to stop seeing patients right away. Already it was understood how the COVID-19 virus spread. And it was particularly dangerous for dentists. He listened and told me he’d think about it. We hung up, and then I walked south.

For a year, I had treated myself to a weekly $7.95 buffet lunch at Samosa Vegetarian on Walnut Street, and I thought of the ritual as a kind of minor addiction. (Perhaps it was the ghee chef-owner Ravinder Singh used so generously in the saag paneer.) Rushing from jury duty, I stepped up the ramp at the restaurant’s entrance, beneath the backlit “Samosa” in circa-1978 lettering, red as dried chilies, into the familiar, soothing cacophony: voices, plates, shuffling feet, Indian travelogue on the high-mounted screen. My addiction wasn’t merely to the saag paneer, but also to the feeling of being part of a great democratic collective, in the rhythmic flow of city life, inside the everyperson’s room. Samosa was a magnet for bus drivers, college professors, gray-bearded radicals, office pals, bank tellers, poets, nursing students, street ambassadors and jazz musicians — the “myriad-moving human panorama,” as Walt Whitman described the drama of Chestnut Street in 1882.

The restaurant was a glory of the homemade, a high-volume operation that felt instead like a visit to your grandmother’s kitschy apartment. A visit that, on that pleasant March day last year, produced an odd feeling of terror. The act of eating at Samosa was indeed communal: the water pitchers moved from table to table, the buffet spoons passed from hand to hand, the used dishes collected in an open bin. Even Singh’s intimate presence as he glided around — stirring the soup, wiping down tables, approaching from behind with a hand-on-your-shoulder “How are you, my friend?” — would now project a kind of menace, the invisible virus on the loose. Entering the restaurant, I saw all this immediately, like a flash X-ray of the year to come. I must have blinked, because I went ahead anyway, grabbing a plate and bowl and getting in line.

Singh closed the restaurant and boarded it up with heavy black-painted particleboard the following day. With characteristic wisdom and forbearance, he told the Inquirer, “If we’re open and somebody has the coronavirus, it’s going to spread.”

Such distance, magnified again by the life-saving masks on our faces, has been an assault on Philadelphia’s greatest quality: its intimacy, the way it draws people to each other and, in the communion, into a direct relationship with the city itself. How a Philadelphian becomes a Philadelphian is also how Philadelphia becomes Philadelphia over and over again across generations, producing its particularly hot kind of magic. This is an act of co-creation.

More than a year after Ravi Singh closed Samosa, I return to the corner of South Camac and Walnut and stand beneath the “Samosa” in backlit chili red. Under the sign, the imposing black barriers that mask the everyperson’s room inside are still there, untouched. Together, the mask across my face and the mask across the doors and windows of the restaurant conspire against the possibility of co-creation.

If a city’s dynamic energy is produced in the electric connection between people and the streets, buildings, and other architectural forms — Whitman called this a city’s “magnetism” — then what might we say of such disconnect and distortion? In the city that demands the human touch, the virus’s muzzling has produced for me a distinct and disheartening emptiness: I am not myself, and the city is not the city. Standing next to this favorite place, I experience an aching loss and even a kind of grief that manifests as detachment, as if something inside me is letting go.

I wonder what the hope is for a sharing place like Samosa when so many impulses generated by the pandemic push us apart. I cross to the other side of Walnut to get a longer perspective, and the black boards, as empty as we perceive the cosmos, suggest another kind of metaphor, of an urban future we can’t quite fathom. Judging by history, we can expect a post-coronavirus cultural flowering, the seeds of which have been planted by artists and activists demanding equity and justice, by scientists and medical researchers, by young people allergic to isolation. Changing political priorities could produce investment in public health, transit and civic space. I wonder if all this will be enough to slow the relentless impulse of stratification produced by capital and technology and intensified by the pandemic — the impulse whose force may be stronger than Philadelphia’s essential magnetism. When the masks finally come off, what sort of city will this be?

Nathaniel Popkin is the writer of the forthcoming five-part documentary American Experiment: The Struggle for Philadelphia. His latest book is To Reach the Spring: From Complicity to Consciousness in the Age of Eco-Crisis.

Published as “The Great Chasm” in “The City Survives” essay collection in the June 2021 issue of Philadelphia magazine.