How Plain Quaker Philly Got Its Wedding-Cake City Hall

A new book on Philly’s architecture is as much about the personalities and politics behind our surroundings as the buildings themselves. 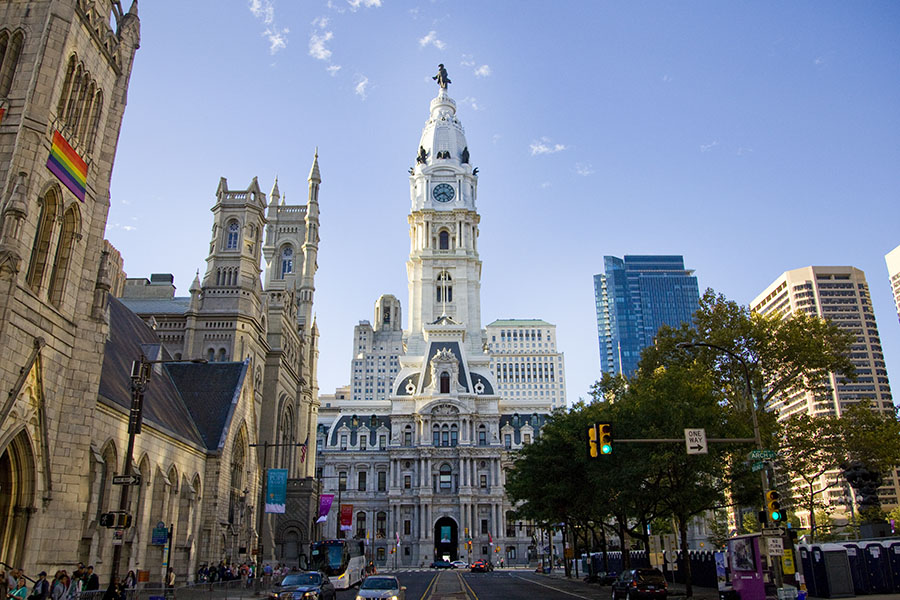 City Hall’s ornate appearance stands out in a city built with Quaker simplicity. Photo by C. Smyth for VISIT PHILADELPHIA

In a new book out at the end of this month, Philadelphia Builds: Essays on Architecture (Paul Dry Books), Wall Street Journal architecture critic Michael J. Lewis spills all the gossip on the backroom politics, influence-peddling, egotistical feuding and occasional (rare) genuine civic-mindedness that resulted in our city’s present built environment. Chapter titles include “The Strange Germanness of the Academy of Music,” “Trashing the President’s House,” “A Museum That Overcomes Its Correctness,” and “The ‘New’ Barnes.” Titans whose work gets treated to Lewis’s dry, unstinting takes include Frank Furness, Louis Kahn and Robert Venturi; in the final section, Lewis writes about “My Favorite Building,” the Pembroke dormitory at Bryn Mawr (“crenellated and castellated against the pillagers who never come”). In one chapter, he traces the almost unimaginably (except in Philly) convoluted history of the design of the city’s central masterpiece, City Hall — seemingly, with its rococo adornments and “cast of colossal marble figures,” the most un-Quaker of civic hearts for our Quaker city. The following (greatly simplified) recounting of that design process is gleaned from the book.

Growing by Leaps and Bounds

In 1854, the Act of Consolidation expanded Philadelphia’s municipal boundaries to include the whole county, making it 75 times bigger than it had been as outlying towns such as Germantown and Frankford moved within its limits. (It grew from 1,200 acres to almost 90,000.) Its public office buildings near Independence Hall were deemed inadequate for managing so vast a city, and a plan was put forward to construct two new “plain and unadorned” buildings nearby to house more offices.

A fierce battle arose between proponents of two alternate sites: Independence Square, within the traditional parameters of the city and the home of the revered Independence Hall, where the Continental Congress had met, and Penn Square, proposed by those who favored westward expansion of the city in accordance with William Penn’s original layout. The question, as Lewis frames it, was: “Should the public building serve the city of the present, or of the future?” The Penn Square site won out, mostly on the grounds that construction of new buildings on Independence Square would obstruct views of a vast monument to the signers of the Declaration of Independence that had recently won approval to be built there. That monument, somehow, never materialized.

An 1860 call for design proposals by a seven-man building committee (it included no architects) produced three. Some civic leaders feared the winning design, by John McArthur Jr., which echoed the U.S. Capitol in miniature, would overwhelm Independence Hall—yes, somehow, the site fight was still going on, with editorials in various newspapers arguing for one square or the other. Opposition to McArthur really heated up, though, when he won the contract to provide the marble for his own design. Charges of corruption flew back and forth, City Council intervened, and everyone, Lewis writes, seemed relieved when the Civil War brought building plans to a halt.

After the war, a new committee was appointed, with more than 20 members (efficient!). Its call for proposals brought forth 10 submissions by architects. While ordinarily in such professional competitions, the names of the competitors are hidden, in this case, they weren’t. Shenanigans ensued as the competitors attempted to woo the judges to their causes. None of the 10 proposed designs has survived, but a newspaper noted at the time that “every plan submitted, with one single exception, has an outcropping of the French roof mania, in various degrees of horridness.” There followed yet another round of design competition, which poor accursed McArthur also won handily. Improvements and embellishments to his design suggested by T.U. Walter, the retired architect who had recently enlarged the U.S. Capitol Building by adding its “sublime dome,” resulted in 1870 in a familiar-looking scheme that included for the first time “free-standing heroic figures” at the corners of the central clock tower, to represent the “allegorical virtues of the city.”

Alas, more politics were afoot. Political boss James McManes pushed through the state legislature a bill establishing a state Commission for the Erection of Public Buildings to oversee their construction (and, not incidentally, approve bids for big-bucks contracts). The bill also threw a wrench into the hopes of proponents of the Independence Square site by offering voters a choice of two alternatives: Penn Square or Washington Square. McArthur’s winning design was again discarded. He was, however, invited to present to the commission a plan adapting his design to Washington Square, which he did. Four days after he submitted it, the public overwhelmingly voted for the Penn Square site instead.

McArthur began to adapt his design once again, this time to suit Penn Square. By now, with the addition of a fourth wing, the building had grown, Lewis writes, into “a hulking foursquare leviathan.” The clock tower was now to be nearly 500 feet tall and capped with a statue of William Penn. Critics found its sheer bulk worrisome and argued for a collection of four smaller, more modest buildings on the site instead. McArthur (Lewis notes that he was an unassuming man, more fond, according to contemporaries, of circuses than the theater) dutifully readapted. But the increased potential for graft and corruption offered by four separate building campaigns turned the public toward a single edifice instead. McArthur again redrew, planning a “single massive towered building, placed directly atop the intersection.” Miraculously, construction began.

McArthur died in 1890, his Second Empire masterpiece far from finished. By the time it was completed (more or less), in 1901, it was already considered “laughably unfashionable,” Lewis writes. Not everyone agreed; Walt Whitman encountered it late one night on his way home and declared it “silent, weird, beautiful,” which is as good a summation as any of the structure at our city’s core. As Lewis concludes at the end of his chapter on the designing of City Hall:

One final note: According to Lewis, Edmund Bacon, the head of the city planning commission for more than 20 years (and father of actor Kevin Bacon), used to tell developers who wanted to build higher than Billy Penn’s hat atop City Hall, “You understand that the rule that no building in Philadelphia can be higher than City Hall is not written down anywhere; it’s what we call a ‘gentleman’s agreement.’” Then he would lean in close and say: “Now my question for you is: Are you a gentleman?” His tactic worked throughout his tenure from 1949 to 1970 and beyond to 1987, when Mayor Wilson Goode, in search of jobs, supported the construction of One Liberty Place. Today, 11 city buildings are taller than City Hall’s clock tower.