Now that the Main Line developer behind the movie landed a deal with IFC Films, you’ll be able to stream “Last Call” online — or watch it in a theater, should you so desire. 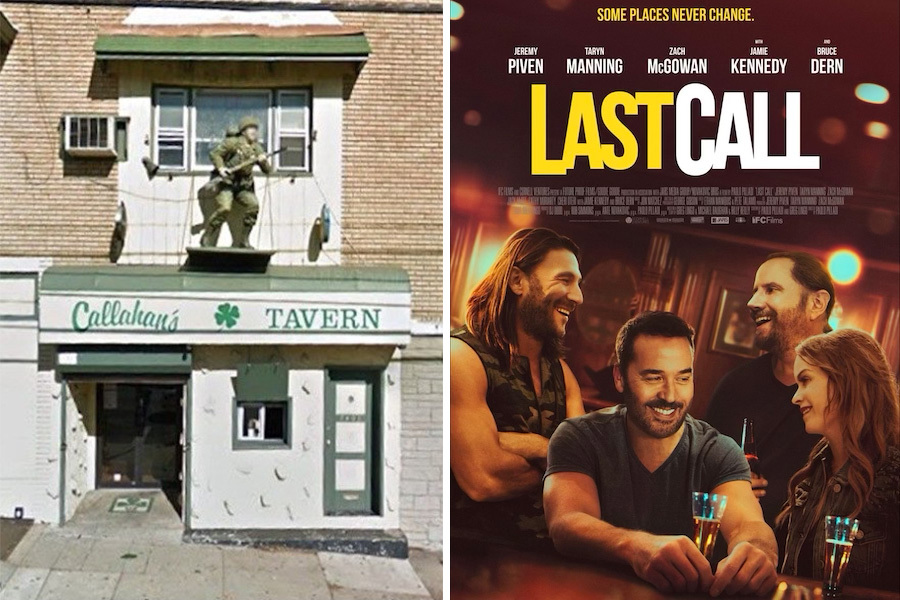 On the left is Callahan’s Tavern in Upper Darby, which served as inspiration for the new Jeremy Piven movie “Last Call,” debuting this month. (Photo via Google Maps). On the right is the movie poster for “Last Call,” showing the characters inside a fictional version of Callahan’s. (Photo courtesy IFC Films/Greg Lingo).

When we first heard that a Main Line real estate developer was making a movie about life in Delco, we weren’t exactly holding our breath that it would actually get released. After all, so many movies never see the light of day. But in this case, our cynicism was unfounded: Last Call will be available streaming and in theaters this month.

Thanks to a deal with IFC Films, Last Call, originally titled Crabs in a Bucket, will stream on the IFC app as well as on YouTube, Google Play, Apple TV and other services beginning on March 19th. The movie will also see a limited theatrical release in about 75 cinemas nationwide beginning on that date, followed by theatrical distribution in the United Kingdom, according to Greg Lingo, the Main Line developer who wrote and produced Last Call.

The movie tells the story of, well, a wealthy real estate developer, played by Jeremy Piven, who grew up in Delco (as did Lingo) but left the area as his success grew. He comes back to town and must decide if he should tear down a favorite neighborhood bar in favor of a much more lucrative real estate venture. Along the way, he encounters all sorts of Delco characters and old friends from the neighborhood. Lingo started writing the movie more than a decade ago.

Much of the action in Last Call is set in and around that endangered neighborhood bar, Callahan’s Tavern, which is based on the real-life Callahan’s Tavern on West Chester Pike in Upper Darby.

Thanks to tax credits in New Jersey, the vast majority of the movie was shot in Bayonne. But Lingo promises a good helping of local exteriors like the South Street Bridge, 69th Street, and Callahan’s Tavern, among other spots in Upper Darby. And there were three days of filming inside Center City’s Fitler Club.

One thing that really had us scratching our heads was the original movie title. It turns out that the Callahan’s in the movie is nicknamed “The Bucket” by the locals who go there, the locals being the crabs. Lingo tells us that IFC Films “suggested” the name change.

“They were right,” he says. “Our initial name needed an explanation. They wanted something clear and concise. Two words. And the way it works out, those two words have many meanings in the movie. The idea of ‘last call’ ties in in a lot of ways.”

The cast of Last Call is rounded out by Oscar nominee Bruce Dern (Nebraska, The Hateful Eight, and Once Upon a Time in Hollywood), Orange Is the New Black‘s Taryn Manning, and comedian and Upper Darby native Jamie Kennedy. The movie marks the first theatrical appearance for Piven since allegations of sexual misconduct emerged against him in 2018, allegations he has denied.

In his other life, Lingo has been building large residential communities in places like Phoenixville and Newtown Square. But he says Last Call probably won’t be his last attempt at moviemaking. He’s working on another script, another comedy.

“I feel like comedy is really underserved right now,” Lingo observes. “Back in the ’90s, there were tons of comedians making films all the time, but now that seems to have fallen by the wayside. And with how we’ve been beaten down by COVID and negative politics, we need comedy more than ever.”