“I’ve been working on this for three years, and it just vanished on Sunday,” says Raphael Tiberino, whose family has been making art in Philly since the 1960s. 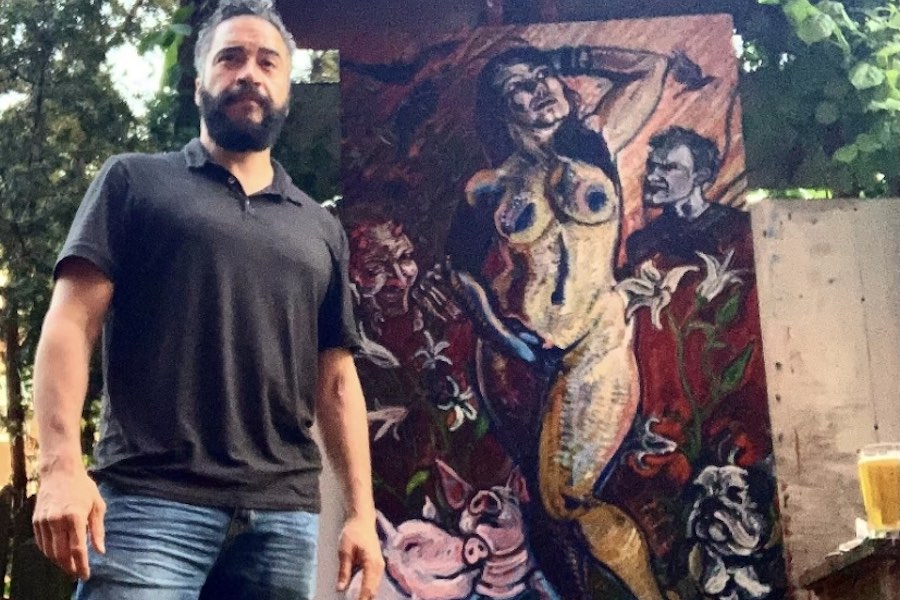 Raphael Tiberino was expecting to spend almost all his time this week creating art in his West Philadelphia home, located in the same compound where his family has been creating art since the 1960s. But instead, he’s been walking around the Powelton Village neighborhood, talking to neighbors, searching for surveillance cameras, and taping “lost kitten”-style signs to poles, desperately hoping to track down a painting of his that was stolen on Sunday from outside his home.

“I’ve been working on this for three years, and it just vanished on Sunday,” says Tiberino, a 51-year-old graduate of the Pennsylvania Academy of the Fine Arts.

Tiberino works in various places at his house, and one of them is an outdoor porch. That’s where he’s been toiling over the painting in question since inspiration struck him a few years back. The painting depicts a nude woman surrounded by flowers, devilish figures and animals.

He saw the painting on his porch on Saturday. But when he walked outside on Sunday morning — no painting.

Tiberino called his local police district, not wanting to bother the 911 operators who have actual emergencies to attend to, especially these days. But he was told that police couldn’t do anything unless he called 911, so he did. Then he spoke with a police officer over the phone. The cop gave him a police report number but, according to Tiberino, said there wasn’t much the department could do.

“I said, ‘Wait a second — this isn’t a lost page from a coloring book,'” remembers Tiberino. “I told him it’s worth at least $5,000 — and of course, I think it’s worth much more than that — and that it’s going to wind up in an auction or hanging in someone’s home. He said that was different and that detectives would reach out.”

That was Sunday. Today is Thursday, and Tiberino still hasn’t heard back from anybody, though he realizes a stolen nude isn’t the highest priority. “I know how bad the city is,” says Tiberino. “I’m not faulting the police at all. Everybody’s problem is important to them at the time, and mine is important to me right now. I put a lot of work into this for a long time.”

The workspace on the porch isn’t actually visible from the street, so somebody would have had to walk onto the porch to notice the painting. A couple of neighbors told Tiberino they had packages stolen from their steps over the weekend, so Tiberino theorizes that a would-be package thief turned art thief and probably didn’t realize the crime was a felony, based on the assumed value of Tiberino’s art.

“Then again, given the neighborhood, which is packed with students, it could have simply been a drunk college kid on a lark,” Tiberino concedes.

Either way, he wants his art back — undamaged — and says he’d even be willing to offer a reward.

Art was and very much still is a family affair for Tiberino.

The Philadelphia Museum of Art houses works by his late mother, Ellen Powell Tiberino, and her paintings, which often focus on the experiences of Black women, are on display in the Best of Philly-winning West Philly museum named after her, currently closed due to COVID. Raphael’s father, who died in 2016, was a well-known artist in his own right and a storied man-about-town. And Raphael’s siblings are active artists as well.

As for the stolen painting, it’s oil on canvas and measures about three feet by five feet. Given the subject matter, if you see it, you’ll probably recognize it immediately.

The Philadelphia police department confirms that the case is open and under investigation. A police spokesperson said anybody with information can call the Southwest Detectives Division at 215-686-3183.

But Tiberino says he’d be happy to handle this privately and is more than willing to take a no-questions-asked approach. You can find him on Instagram.

“A lot of time and energy went into this,” Tiberino tells us. “It means a lot to me personally.”