Parts of the region could see up to a foot on Wednesday, though there's still a bit of uncertainty in the forecast. 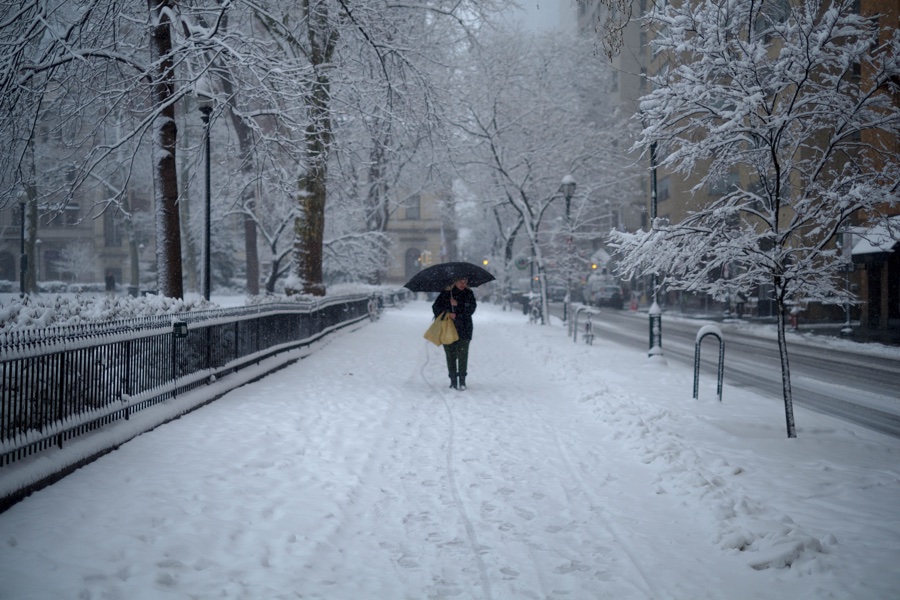 If it feels like ages since Philadelphia has had a forecast for snow like this, that’s because it has been. Photo via Getty Images

Out near Pottstown today, a Philly Mag staffer reported “big wet snowflakes on the western front.” Cue celebrations among the snow-philic and assumption of blanket-wrapped fetal position for the snow-phobic.

In fact, Monday’s storm is really just the amuse-bouche for what’s expected to be a much more severe weather event on Wednesday: a snowstorm that the National Weather Service says could drop anywhere from four to 12 inches of snow around Philly. Time to dust off your snow boots and winter gloves. Here’s what you need to know about today’s weather and, more importantly, the one still to come.

While there is a lot of focus on the midweek storm, northern and western portions of the area continue to see some snow today, while it is mainly rain elsewhere. The map below is for *today's* event. Let us know if you're seeing any accumulation! #NJwx #PAwx pic.twitter.com/l3cUv9rHd5

Seeing as it’s already Monday and you can gauge the weather simply by taking a look outside your window, there’s not much to say here. The storm on Monday was always going to be more tame than the one coming Wednesday. Earlier, the NWS predicted light snow in northern parts of the region, with only a mix of rain and snow and no accumulation anticipated along the I-95 corridor. The rain or snowfall should end quickly (if it hasn’t already), starting in the western part of the state and then moving east. As of 12:43 p.m., the NWS meteorologists reported that they’re “not expecting much in the way of additional amounts” of precipitation.” For that, you’ll have to wait … until Wednesday.

A Nor'easter will affect the region later this week bringing what will likely be the most impactful winter weather in several years. Note, there's still some uncertainty in the exact track of the low, which will affect the placement of the rain/snow line. #PAwx #NJwx #MDwx #DEwx pic.twitter.com/Mx4JkZ3SfZ

Now, this is where it gets interesting. The NWS has issued a Winter Storm Watch — the first in Philly, according to the Inquirer, in more than 650 days, on account of last year’s snowless, soulless winter. The NWS is already warning of “the most impactful winter weather in several years” and of possible “hazardous conditions” that could impact commutes on Wednesday night and into Thursday morning. The nor’easter is expected to first start dropping precipitation on Wednesday morning.

So what to expect, precisely? That depends where you live. As you can see from the map above, the NWS suspects that the area north of Philly will be hit hardest, seeing somewhere between a foot and a foot and a half of snow. It is, the NWS wrote in a recent forecast, the “sweet spot for heavy snow.”

The predicted snow forecast in Philly is shaping up to be trickier. The forecasters think we’ll be right along the line at which snow turns to rain — always a pain for the prognosticating meteorologist. If Philly ends up on the snow side of the line, you can expect up to a foot of snowfall. If we receive mostly rain and sleet, there could be as little as a few inches.

“Unfortunately (for us meteorologists),” the NWS writes, the snowfall for our area is “highly uncertain.” But then, that’s the weather for you. It’s not just the long-range forecasts that are hard to predict.