Another PA Republican Tests Positive for COVID, This Time Mid-Meeting with Trump

If you're looking to stop super-spreaders in Pennsylvania, maybe start with Republican lawmakers in Harrisburg, many of whom to this day still refuse to wear masks. 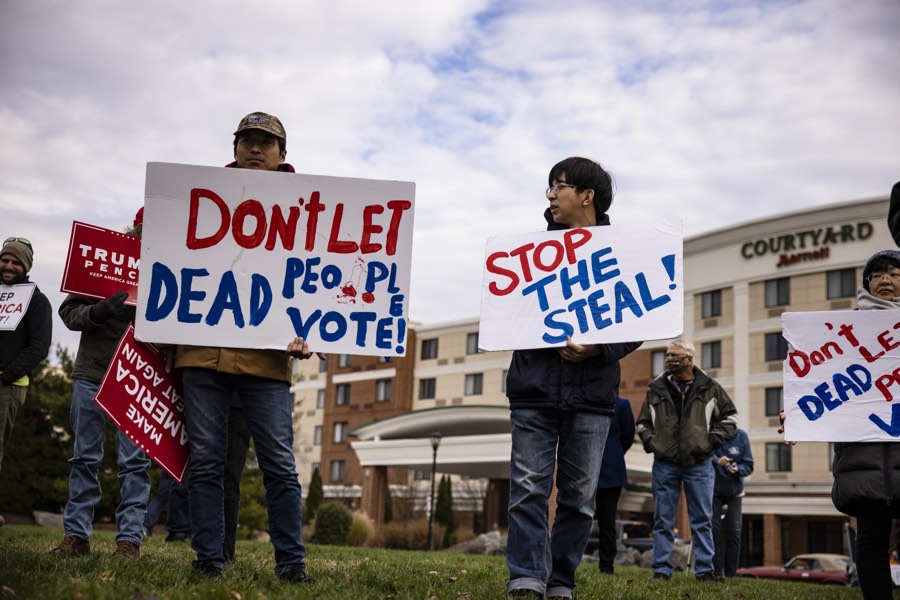 Nothing is ever surprising these days, so the news that a delegation of conspiracy-theorizing elected representatives from Pennsylvania descended on the White House to meet with President Trump and try to overturn the results of the election produced a feeling closer to dull amusement than scandalized shock. And when the Associated Press broke the news on Sunday that one of the politicians, State Senator Doug Mastriano, of Adams and Franklin counties, learned he’d had a positive COVID-19 test literally while meeting with the President and had to be removed from the coup rehearsal session? Well, that wasn’t all that surprising, either. It was only a matter of time before the two biggest stories in the country joined forces in a kind of ridiculous synergy.

Mastriano and the other Pennsylvania Republicans had sought to meet the President to “strategize about efforts regarding the election,” according to the AP. There was certainly much to discuss: In the past month, Republicans in Harrisburg have tried and failed to force a redundant audit of the election, staged demonstrations outside the Capitol (in which Mastriano participated, unmasked), put together a semi-official public “hearing” (hosted by Mastriano at a hotel ballroom in Gettsyburg) about election fraud, and proposed a resolution (put forth by Mastriano) that would have called on Secretary of State Kathy Boockvar to decertify the results of the election in Pennsylvania.

One wonders how this conversation went with the President, because all of the efforts Republicans have come up with so far have essentially been meaningless. The public hearing, just like Mastriano’s appearances on right-wing TV stations like Newsmax, in which he floats easily disprovable conspiracy theories, was closer to a mock trial than true governance. For an audit to overturn the result of an election, it would need to uncover evidence of fraud, and there hasn’t been a shred of evidence of fraud in what has to be the most scrutinized election in history. And the resolution to decertify the election will likely never see the light of day, not least because there isn’t even enough time to vote on it before Harrisburg packs up for the end of its legislative session.

This refusal to accede to reality isn’t unlike how a significant cohort of Republicans in Harrisburg have handled COVID-19. Even as the pandemic enters its 10th month, many Republican politicians in Harrisburg, Mastriano included, reject wearing masks.

Democrats in Harrisburg have long decried this disregard for public health. Back in May, when a Republican politician tested positive for coronavirus, forcing two other Republican colleagues to self-quarantine, Democrats were kept in the dark, even though many suspected they might have been exposed. More recently, State Representative Elizabeth Fiedler filed a complaint with the state department of health alleging that the Republicans in the state House are creating unsafe working conditions through their refusal to wear masks in the legislature.

If we really wanted to put a halt to possible super-spreaders, maybe the best place to start would be the Republican caucus in Harrisburg. Fortunately, the politicians are doing it for us. Monday marks the final day of the 2020 legislative session.