Recent controversies involving Black public figures and antisemitism show how a lack of intersectionality in combating such bigotry has furthered its vitriol. 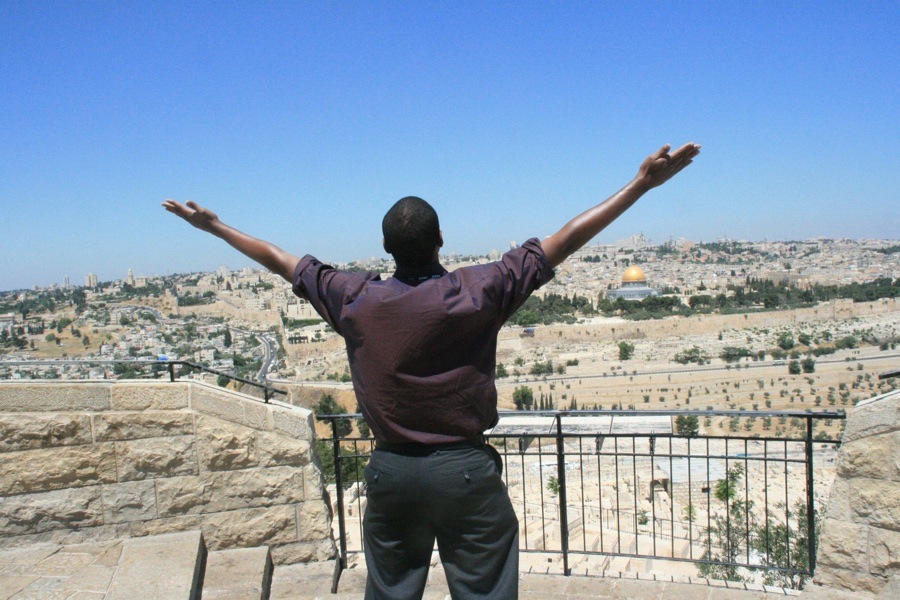 It was billed to me as “the trip of a lifetime.”

In the summer of 2012, I received an all-expenses-paid trip to Israel hosted by the American Israel Public Affairs Committee (AIPAC) and funded by the Adam and Gila Milstein Family Foundation.

I was a sophomore in college at the University of Pennsylvania and was offered the opportunity due to my role in campus student government and politics. The trip, which included an extensive weeklong itinerary across Israel, was intended to expose non-Jewish college leaders to the history of the country and why it was important for us to be invested in its safety.

This would be one of my first trips abroad, and such an experience seemed hard to turn down. I was told by facilitators of the trip that it would help me understand how to be a better role model in the fight against antisemitism. I was reminded often how important it was for young Black leaders like myself to tell others within my community to have respect and empathy for the Jewish community. These were expectations that I didn’t question and found reasonable. I was often referred to as an “ally,” and my understanding of allyship back then was limited to simply listening to the marginalized and following their marching orders.

In this case, I, the non-Jewish Black person, was being told by white Jewish people how to be an ally to them.

When I landed in the Middle East, the trip was more complicated than that. Our group’s travel rarely included conversations with Jewish people of color, except when we’d stop at what appeared to be an orphanage or a secondary school, where we’d take pictures with Ethiopian Israeli youth at a playground. I would later see how such photo opportunities could be viewed as a form of voluntourism, given that we had more camera shots than conversations with the youth there.

Despite some of the readings I did beforehand, we never discussed any of the sociopolitical issues in Israel outside of the threat of Iran. It was 2012, and the world was on the edge of its seat over how a nuclear Iran under the leadership of then-president Mahmoud Ahmadinejad could spell dire consequences for Israel. About 90 percent of our conversation about Israel, outside of food and faith, was centered on national security/international relations. We never talked about racism, discrimination, or cultural clashes happening within the country. We spoke with predominately white Israeli dignitaries, scholars and influencers across the country, and I would later realize that we were given a very whitewashed narrative about Israel’s prosperity and success — divorced of conversations about alleged ethnic cleansing and systemic racial segregation.

I would learn much later that my experience was indicative of broader issues within the fight against antisemitism — that the movement needed more intersectionality to combat racist tendencies in some parts of the culture. But at the time, eight years ago, I was 20 years old and still a Black college kid trying to find my voice in largely white spaces. Understanding more would take years of studying critical race theory and growing up in a world that continued to prove to me that my college degrees, respectability, and proximity to power couldn’t shield me from a racist society. At that point, I still believed that education and opportunity were all I needed to thrive.

Following my trip to Israel, I spent the remainder of my summer in Washington, D.C., as a political intern for AIPAC, where I was the only Black member of my intern class. This opportunity, another fully paid and furnished experience, initially felt like a blessing, because I finally got an internship in the nation’s capital. But it was during this time that I realized being an ally in this movement was more complicated than I had anticipated.

During my internship, I experienced numerous racial microaggressions that cut at my class status and identity. Because this was a bipartisan program, some of my fellow interns were extreme conservatives who made sweeping generalizations about Black people’s commitment to supporting the Jewish community based on the fact that some Black people were a part of the Nation of Islam. I was often probed by some in my cohort on my feelings about Nation of Islam leader Louis Farrakahan, who is known for a history of antisemitism, and asked if I knew any Black Muslims I could “persuade to stop listening to him.” I quickly became the go-to Black person on all things related to “race relations” and what “your people” thought about Israel.

There were the daily debates over whether President Obama was doing enough to protect Israel and how I, as a Black ally, should be less enthusiastic about him. It was almost as if I was being provoked to argue on behalf of an entire race of people in a space I thought was about listening, learning and being progressive. I began to sense that what being an ally against antisemitism meant at AIPAC was adopting more “bipartisan views,” even if that meant backing politicians who I felt were still problematic on race, LGBTQ rights, and other relevant issues.

I quickly realized the conflation being made between having pro-Israel beliefs and fighting antisemitism. When I questioned Israel’s role in the Middle East in regard to the Palestinians, I was reprimanded that such thoughts could be taken as antisemitic and could “ruin your promising career.” As a result, I felt singled out and highly monitored throughout the program. My social media posts, the op-eds I wrote as a college columnist during the summer, and any other activism I did beyond the internship had to be cleared by the staff. This made me feel like a social pariah, one who was reduced and tokenized.

Although I was getting a great deal of cultural exposure and forming an alliance that I was deeply passionate about, I felt an undeniable racial disconnect. It was hard to ignore the glaring divide that had begun to impact my understanding about working to dismantle bigotry across the board. How can there be a unified fight against antisemitism when race isn’t being factored into such efforts?

In that moment, it became clear to me that if progress was to be made, the fight against antisemitism had to deal with its own internal racism.

To be clear: Heightened sensitivity to public antisemitism is warranted, given the extreme rise in hate crimes against Jewish people nationwide. Since 2016, marginalized communities (including people of color, immigrants, LGBTQ people, Muslims and Jews) have had to be ever more cautious as white supremacists and bigots have become emboldened to target them.

Within hours of each of these recent incidents, I received a wave of social media direct messages from white Jewish peers I hadn’t heard from in years, asking what my thoughts were and emphasizing how important it was for me to say something publicly. Of course, I was going to say something — but I also felt uncomfortable being summoned in a way that presumed the worst of me. I had never asked these individuals to personally speak out against racism during the recent #BlackLivesMatter protests, so for there to be demands made of me — when many of those demanding had remained silent and/or passive — spoke volumes.

But in this moment, there was an immediate expectation that Black people would speak on behalf of our entire community in condemning the actions of a few — and this created division among both Black people and white Jewish people online. I saw several of my followers on social media begin to debate how antisemitism and racial oppression are and aren’t similar.

And while parallels do exist, there is one stark difference that’s often ignored: White Jewish people in America benefit from white privilege that has allowed them to also discriminate and oppress Black people. My personal experience in both Israel and America showed me that racism transcends various movements — whether within the fight for LGBTQ rights or against antisemitism.

As someone who has worked to combat antisemitism throughout my college years and beyond, I’ve found it hard to ignore how complicated it has been to continue to experience racism in spaces that publicly call for tolerance and understanding. Until certain pockets of the Jewish community address the racism that takes place within the movement against antisemitism, such disconnects will be weaponized by anti-Semites to distract the public and misinform it about why such alliances are necessary.

We saw this happen in 2018, when a community-backed Black D.C. council member named Trayvon White made a video implying that the city’s snowy weather was controlled by the Rothschilds, a European Jewish banking family. We also saw how such misguided hatred led to violence in the 2019 killing of Jews at a New Jersey kosher supermarket by a member of the Black Hebrew Israelite movement, a controversial pro-Black hate group. Culturally, the reckless fallacy and conflation of white supremacy and Judaism has driven some of those in Black creative spaces, such as hip-hop, to project antisemitic views that are illogically masked as acts of social justice.

But a lack of intersectional understanding and empathy can also be seen in the racist actions that sometimes take place within the Jewish community. It was devastating to read stories of Africans being expelled from Israel by its government in 2018. It has been hard to ignore the undeniable colorism and exclusion of Black and brown Jewish people from conversations about antisemitism. Such racial division has also shown up in the lack of solidarity from some prominent American Jewish organizations being asked to support platforms launched by Black Lives Matter activists. Such disunity has made it hard for either community to sustain trust within current movements, despite the longstanding history of Black and Jewish social justice alliances.

For example, it’s hard to ignore the fact that the very same donor who funded my first trip to Israel, Adam Milstein, generated headlines last year for making some arguably Islamophobic tweets that targeted two U.S. Congresswomen of color, Ilhan Omar and Rashida Tlaib. Such transgressions forced AIPAC to publicly distance itself from Milstein during the controversy, as he was slated to moderate an antisemitism panel for the organization. It is in moments like this that other marginalized individuals feel unnecessarily oppressed by those who benefit from the white supremacy we should all be dismantling.

In a world where white supremacy is revealing itself as the root of all sociopolitical evil, we can no longer run a movement to combat antisemitism that lacks intersectionality — the same way that the movement for Black lives should remain steadfast in not diluting its efforts with any form of hate.

My Blackness shouldn’t be a target within the very spaces that call for me to combat antisemitism. And Jewish people shouldn’t be subjected to misplaced prejudice. In order for us to work together, we must see each other in our fullness and not try to deny our various identities in order to coexist.