Their Instagram account, @blackmainlinespeaks, sheds light on injustice in an elite area they say "is known for its expensive stores, exotic cars, exclusive schools, and racism." In four weeks, they've gained more than 21,000 followers. 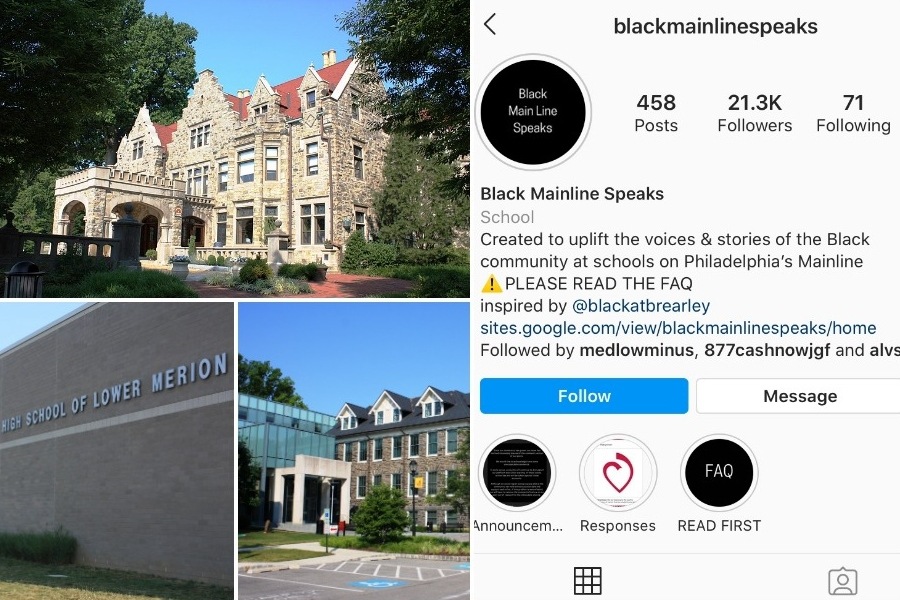 As thousands of demonstrators took to the streets in Philadelphia last month to protest racial inequity and police brutality against Black people, three Main Line private school graduates started their own localized movement on Instagram.

The alumnae — three Black women who attended primary schools in the wealthy suburban region — took to social media to launch an account called @blackmainlinespeaks. There, they share anonymous stories submitted from other Black Main Line primary school students, alums, parents and teachers, all detailing racist experiences at schools in the area.

In the last four weeks, they’ve shared a wide range of experiences, from slights by white student to traumatic bullying, unreasonable punishment and over-policing in schools. During that time, response to the account has been overwhelming: @blackmainlinespeaks has gained more than 21,000 followers, and its creators have been flooded with additional stories, petitions for change at schools, comments and praise.

The posts have also facilitated responses addressing their accusations from more than a dozen local institutions, including the Lower Merion School District, Agnes Irwin and Shipley schools in Bryn Mawr, Friends’ Central School in Wynnewood, the all-boys Haverford School, Villa Maria Academy in Malvern and more.

We caught up with the women behind @blackmainlinespeaks last week to talk about the power in their platform, the stories they’ve read and how they hope to inspire changes. We spoke on the phone with all three women, who requested that their voices be consolidated to represent the account and that they remain anonymous to prioritize spotlighting the stories they share.

Read our interview below — and visit the Black Main Line Speaks website for more information.

When and how did you decide to make this account?
One of the people on our team shared an account called @blackatbrearley, about a private school in New York City. Students and alums there started an account to raise awareness about anti-Black racism they experienced at the school. We got inspired to start one about the Main Line. We knew we all had our experiences, and our friends did, so we wanted to shed light on something that is so often brushed under the rug and ignored.

How have recent Black Lives Matter protests influenced this account?
When we were at schools on the Main Line, when Black Lives Matter started [in 2013], a lot of [local] schools tried to silence students who wanted to talk about it, or they allowed discussions but [the discussions] weren’t really solid or well-facilitated. We were students, and when we were trying to speak up against injustices we felt in school, we weren’t welcomed, or we were reprimanded, nothing would come from it. The recent protests triggered those memories for a lot of people. We were finally starting to see schools put out actual statements and invite students and alums and start to make tangible change as opposed to just stopping at conversations. We felt like [the recent protests] called for more [action].

Many of the schools mentioned on your account have responded with official statements. In your opinion, have any of these schools responded adequately?
I think it’s a little bit early to tell. People make a lot of promises, but it’s going to come down to what actually gets done. So in that aspect, we can’t really speak on [adequate changes] now. At the same time, I think accountability is always key, and that’s what we’re fighting for and what a lot of other students are fighting for.

You often post schools’ statements to your account and allow followers to weigh in — through polls — on whether or not the statements are sufficient. We — or I — haven’t really seen this platform used in this specific way for checks and balances.
I would say that with our platform, the students’ voices can actually be heard. Many times students and parents rely on administrations and alumni boards and school boards that don’t reflect the environment or demographics of the school. Through this platform, students can share their voices and be listened to, because we’re in large numbers but also because we’re backed by alums and parents. We’re able to have a dialogue that’s been happening for a while on some level, but because of the power that administrators and boards have had, we haven’t been able to [hold power until now].

Thinking back, are there any specific stories that stand out to you?
I’d say the stories where students had the courage to go to their administration and report their experiences and were still silenced, and there was no accountability. Those are the most frustrating but powerful stories. What we like about the breadth of our account is that it includes stories of micro-aggressions up to teachers grading [Black students] harshly and schools not elevating [Black teachers] to leadership positions. It’s really a big-picture kind of thing, and the breadth of the stories shows that.

The FAQ section of your account emphasizes that this platform isn’t for white voices. Can you talk more about that?
[Black] voices have been silenced for so long. In our comments section, we’re seeing a lot of white people speaking up and saying that they saw so much racism happen, or just that they have a lot of white guilt. If they saw [racism] happen and never used their voice and power and privilege to right those wrongs, our account isn’t a place for them to right some kind of internal guilt they have. It’s for our voices and experiences. It’s to show that at these schools, we have had no support from students, alums, administrators or teachers.

How would you like to see people — especially white people — take what they learn from this account and change Main Line schools for the better?
It depends on what the Black students need from the schools. It’s not one [fix] across the board. Each school might need different initiatives. But we would like white alums to step up and use their voices, because we know white alums are reading these [stories] very often. They should take them to the schools and say, ‘Listen to what your Black students, your Black teachers, your Black parents need.’

Have you thought about expanding the account to include colleges on the Main Line?
We had a core group of [Main Line private] schools we were originally going to focus on, eight or nine schools, but as the account grew, we started getting so many more submissions from other schools on the Main Line. But we knew we wanted to focus on our experiences and others’ experiences of K-12. With colleges, you can’t always really connect with them in the way you can with K-12 schools, because colleges have such strength in position and policy. We also aren’t as familiar with them because we don’t attend colleges on the Main Line.

Are you seeing any particular issue — or one particularly problematic school — arise from these stories?
I think the lack of accountability is the overarching [issue]. A lot of these students don’t have anywhere to go [when sharing their experiences]. Schools need to consider who is going to listen to them and how they are going to ensure that they’re always treating instances of racism appropriately. And that’s an issue at all the schools, not just one in particular. So many comments we receive say, ‘Oh, this school is especially bad.’ But that doesn’t mean other schools aren’t as bad. That just means we aren’t getting those stories.

What kinds of responses have you received from people reading the stories?
People have been very thankful to us for creating the account. Personally, I don’t feel like I can really accept that thanks. We saw a need and we created a space for it. They’re the ones we should be thanking.