They claim their First Amendment rights to free speech were violated when the police department punished them over their social media activity, some of which was violent and racist. 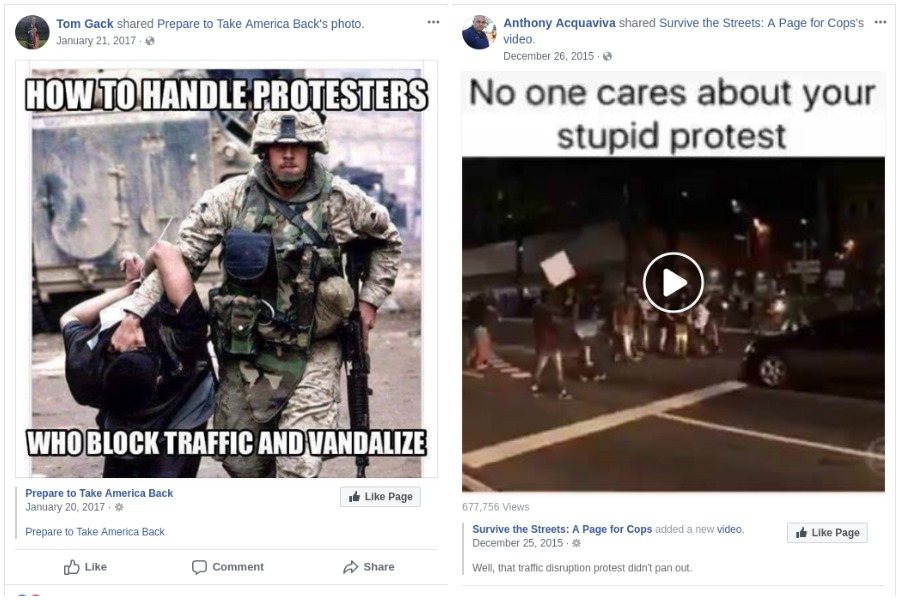 Social media activity attributed to two of the plaintiffs in the $18 million lawsuit against the city over the 2019 Philadelphia police Facebook posts scandal. (Images via the Plain View Project)

Long before the Philadelphia Police Department was faced with its current trough of troubles, Philly cops found themselves at the center of a much different firestorm: the 2019 Philly police Facebook post scandal.

A brief refresher, since a lot has happened since then…

On June 1, 2019, BuzzFeed News released an explosive investigative report titled “Cops Across The US Have Been Exposed Posting Racist And Violent Things On Facebook. Here’s The Proof.”

The media outlet teamed up with non-profit news organization InjusticeWatch to review thousands of Facebook accounts of cops around the country. They found “officers endorsing violence against Muslims, women, and criminal defendants,” according to the investigation.

That report went viral right quick. And it had implications all over the country, including here in Philadelphia. The Philadelphia Police Department took 72 cops off the street within a few weeks of the report’s release. Cops were punished in various ways. Some were demoted. Some were fired.

Well, now some of the those who were disciplined have banded together to file an $18 million lawsuit against the city. The suit calls BuzzFeed News “a left-leaning agency that has been widely criticized by several journalistic sources as unreliable…”

The nine plaintiffs include current Philadelphia police officers as well as some who say they were fired or forced to resign over the scandal. Their names are as follows:

You can search their names in this database that’s attached to the investigation if you want to see the posts attributed to them. Some of those posts appear to be their own thoughts. In other cases, they are sharing memes. And in some instances, they are comments on others’ posts. And much of what they have to say is downright offensive and inappropriate for anybody in uniform. Well, anybody in society, really, but I digress.

The lawsuit, filed last week in federal court, points to the following social media policy, which lawyers for the plaintiffs say was in effect at the time of the posts:

Employees who are off-duty, and using privately-owned property to engage in the personal use of social media, do not represent the City of Philadelphia, the Philadelphia Police Department, or any official position maintained by either entity. Under such conditions, employees represent only themselves and their personal interests.

And so, by punishing them, the cops (and fired cops) say that the city has violated their First Amendment rights to free speech. Each plaintiff is seeking $2 million in damages plus attorney costs.

Been out of town recently? Hanging out on Miami Beach? Or, for whatever reason, in Kansas? The list of states that you’re supposed to self-quarantine after visiting keeps growing here in Pennsylvania.

Here’s the full (current) list, though I can only imagine they’ll be adding new states to the list if things keep going the way they are going:

Note that this self-quarantining policy is not mandatory. But if you don’t listen to the public health experts and follow the rules, you’re definitely not my friend anymore.

No, I’m not talking about Snooki and Pauly D, although I’m sure those Jersey Shore idiots continue to be idiots. I’m talking about your friends, your next door neighbors, and maybe even you! The people who just can’t seem to figure out this concept of social distancing while at the Jersey Shore.

Crowds were, once again, at uncomfortable levels once the rain got out of the way over the weekend. And police in at least one Jersey Shore town had to shut down beach access because of the huge social distancing fail there.

I’ve said it before and I’ll say it again: pre-COVID, if you stuck your beach chair or beach blanket closer than six-feet away from me, that was too close. Now it’s way too close. And leave the spray sunscreen at home too!