Intubated and Unconscious: My Battle With COVID-19

After spending 13 days on a ventilator, losing 27 pounds, and experiencing all manner of drug- and fever-induced dreams, I came out the other side, and with a newfound clarity about what’s important. 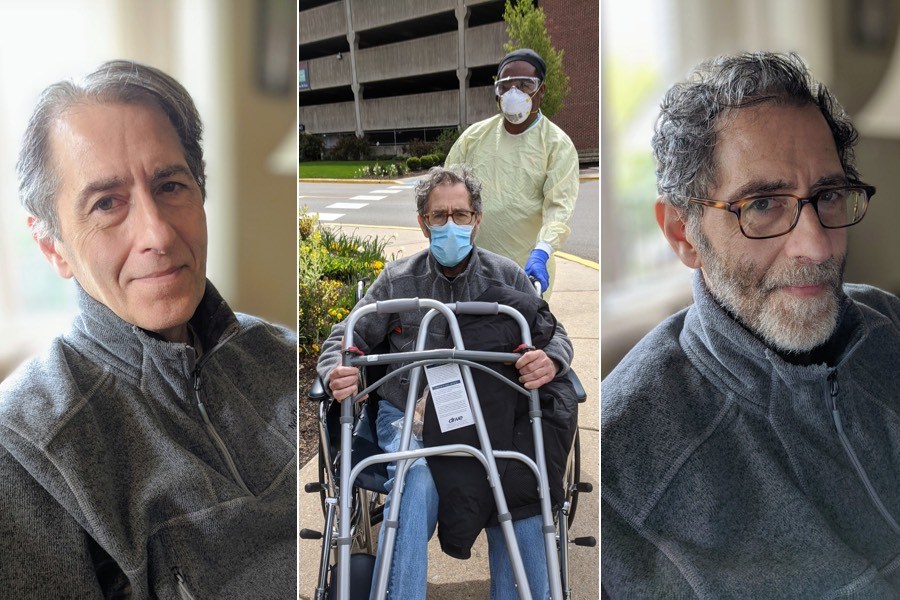 The author before and after COVID-19. Photographs by Monica Hamill

It was mid-March, and I was fighting a nagging sinus infection — the second in a month — taking an antibiotic prescribed by my primary care doctor and using a sinus rinse. But I wasn’t getting any better.

On March 15th, I had played in a weekly ice hockey game, a decades-long routine. As a 68-year-old goaltender strapping on the pads against guys much younger, I had to stay in fairly good condition. My regular workout consisted of weight lifting, interval cardio training and stretching. So I was in pretty good shape and had no chronic medical conditions. Those factors would later prove to be a crucial advantage.

The day after the game, I started feeling strange — different from the sinus problem. I took my temperature. It was normal at first but slowly climbed throughout the day. The next morning, I had a low-grade fever and just felt crummy.

I can’t say what it was, but something impelled me to find my will and medical power of attorney and place them prominently on my desk. I called my primary care physician, who arranged for a COVID-19 test. The results, when they eventually arrived, came back positive.

By now, my fever was bouncing between 101 and 102 degrees. But my breathing was normal, and I wasn’t at all achy. Monica, my girlfriend, forced me to drink water and tried to feed me and get me out of bed. All I wanted to do was sleep. She called my doctor, who instructed her to buy a pulse oximeter to measure my oxygen intake. Since Monica was possibly exposed to COVID, my daughter Lindsey, a nurse practitioner, purchased the device and left it at the door.

Generally, a normal oxygen level is 94 or higher. Mine was 80. On March 22nd, Monica bundled me into her car and took me to Penn Presbyterian Medical Center in Philadelphia. At an entrance reserved for suspected COVID-19 patients, she was instructed to stay in the car as I transferred to a wheelchair. The look on my face as I was wheeled away, she said, was heartbreaking.

Six hours later, she called the medical intensive care unit for an update on my condition. The nurse told her I was a very sick man.

I had been wheeled into a glass-enclosed isolation room where a group of four or five doctors and nurses were waiting. Everyone was gowned, gloved, goggled and masked. It reminded me of the scene in the movie E.T. the Extra Terrestrial where the government agents are decked out in hazmat suits.

I don’t remember being examined. Nor do I remember calling my daughter to tell her I was in the hospital. What I do recall is a gowned being saying that I had to be immediately intubated and shrugging my shoulders and saying, “Do what you have to do.”

And then I was asleep.

That night, my fever spiked, and my blood pressure fell dangerously low. I was put on blood pressure medication. My feet were cold and slightly purple, worrying doctors about blood flow. At the time, they were just learning about COVID potentially causing blood clots throughout the body. Using Doppler ultrasound, they were able to find a pulse in my feet.

My daughter, who holds my medical power of attorney, called the nurses at least twice a day. The medical team, she was told on day two, was hopeful that I would pull through. My prognosis, a nurse told her, was the best of anyone on the floor. That optimism soon would be dashed.

Three days after I was admitted, the team began weaning my sedation. While not fully conscious, I could follow commands from the medical team to wiggle my toes and squeeze their hands. I even FaceTimed with Lindsey and Monica, though I don’t remember much.

Trying to communicate with a tube down your throat and high-octane drugs coursing through your body can be challenging. So I motioned writing by using my right hand as if holding a pen and the palm of my hand as paper. Nurse after nurse would place a pen in my hand and hold the paper. And nurse after nurse couldn’t understand what I was writing. How could that be? I make my living writing. After I was extubated, the nurses gave me my earliest attempt at notes. Most were indecipherable squiggles, but a few were quite clear.

One note read, “Make my breathing easier.” Another read, “I’m tired and could use a drink.”

Things were looking so good that the team considered extubating me on March 28th, just six days after I was admitted. That’s when it all came crashing down. After being fever-free for 48 hours, I suddenly spiked a high fever. My heart rate was elevated, and I was struggling to breathe. A nurse told Lindsey doctors didn’t know how much more my body could handle. It was the worst night of many bad nights for Lindsey and Monica.

I had developed ventilator-associated pneumonia and was administered intravenous antibiotics. I was sedated and breathing more easily, but the prognosis hadn’t changed.

While that was happening, I was far away in drug-induced dreams and hallucinations.

In one dream that probably occurred during the high fever, I was in Atlantic City, a place that in real life I’ve visited twice. It was hellishly hot, and I desperately needed to cool off. Just yards away, a flight of stairs led to an attraction where you could lie on flat rocks while water sprayed over you. And it only cost a quarter.

But every time I tried to go down the stairs, I collapsed. I remember a disembodied voice saying they were going to help. I felt ice packs being placed under my arms and on my groin and stomach. It was wonderful.

I had no concept of time, but one night (or day) I heard a voice and saw the silhouette of a man. In my drug-addled state, I decided that it was James Earl Jones, so of course this must be CNN. It wasn’t Mr. Jones, but rather William Short, M.D.

Short, who had been following my case since I was admitted, was principal investigator for the Hospital of the University of Pennsylvania and Penn Presbyterian for the National Institute of Health’s Adoptive COVID-19 Treatment Trial for the experimental drug remdesivir.

He called Lindsey, told her about the study, and asked if she wanted to enroll me. After reading about it, she agreed. It was a double-blind study, meaning that neither doctors nor patients knew whether they were getting the drug or the placebo. I was the 17th person enrolled.

Days would pass before I got the first dose. Short had to wait for my elevated liver enzymes, which can indicate inflammation or cell damage — common in COVID patients — to slip into the high normal range. Then I received the full course of 10 doses. Although no one, including Short, knows if I received remdesivir or the placebo, what I have been told is that shortly after the infusions began, my elevated enzymes returned to normal.

Slowly, the drug coma was lifted. Still intubated but more awake, I felt time pass slowly. No visitors were allowed, but I FaceTimed several times with Lindsey and Monica.

The breathing tube was removed on April 3rd. After I passed a swallow reflex test by a speech therapist, I was carefully spoon-fed applesauce. It tasted like a seven-course gourmet dinner. That was followed by chocolate pudding. My taste buds were dancing. And while I still wasn’t allowed to drink, I munched on ice chips, another ingenious invention.

My oxygen support was slowly reduced. I was so helpless that it took two nurses to muscle me out of bed and into a recliner. In those 13 days of intubation, I had lost 27 pounds.

I had plenty of quiet time in the hospital. I thought about how just two weeks before, I had been standing with my heels on the edge of a ledge, precariously balanced between life and whatever is next. I thought about who and what was important. I made a decision. When Monica called that day, I asked her to marry me. I made it clear that drugs had nothing to do with my proposal, that I was clear-eyed and serious. She said yes.

After four days in a step-down unit, I was discharged on Good Friday, which I immediately renamed Great Friday. I am home with Monica recuperating, three weeks into what I am told will be a six-week recovery to get back to who I was the Sunday before I got sick. But thanks to so many people, I am here.

Robert Calandra is a book author and freelance writer.