The protests have brought a fresh spotlight — and an increase in donations — to an organization that's been fighting the injustices wrought by the cash bail system for three years. Its lead organizer talks prison reform, defunding the police, and holding Larry Krasner at his word. 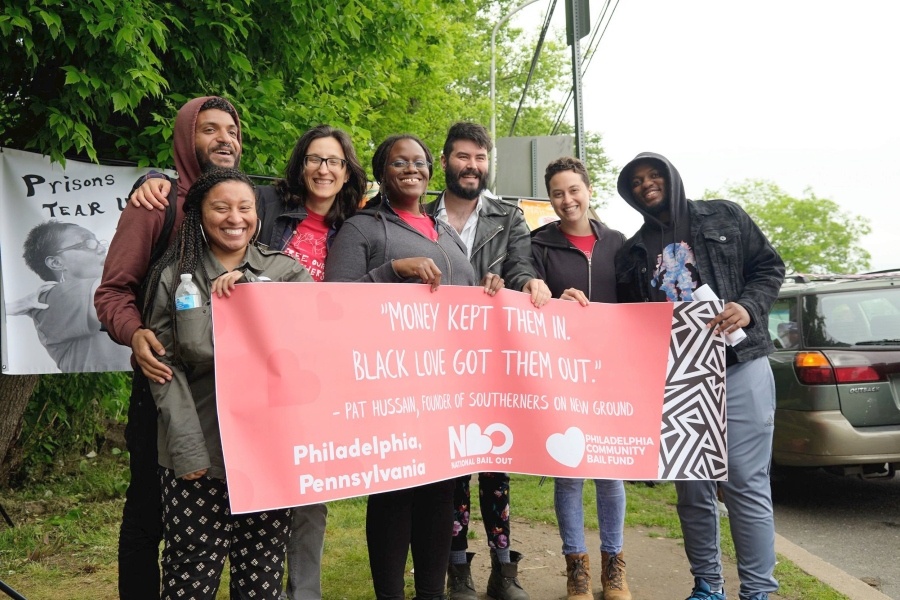 The tragic deaths of George Floyd, Breonna Taylor and others have ignited protests around the country and brought the inextricable consequences of police brutality and racism to the forefront of so many American minds. As people ramp up calls for nationwide systemic change, many are looking to donate to organizations that have been leading the charge.

Last week, donations quickly poured into fund-raisers most closely related to recent events, like the George Floyd Memorial Fund and the Minnesota Freedom Fund. Soon enough, organizers behind those causes began pointing people toward other worthy causes, including local organizations like the Philadelphia Community Bail Fund.

Established in 2017 after a citywide Mothers’ Day bail-out effort, the PCBF raises funds to post bail for those who cannot afford it. The organization seeks to end cash bail and pre-trial detainment in Philadelphia (which you can read more about here).

Since May 2017, volunteers for PCBF have posted more than $1.6 million in bail, freeing 401 Philadelphians. That includes 161 people since the start of the pandemic alone.

We recently spoke to PCBF’s lead organizer, Candace McKinley, who discussed the organization’s donations and mission and its current goals for the city and nation.

Has PCBF received more donations than usual during the protests?

Yeah, a whole lot more. Between May 29th and June 8th, we received more than $1.5 million in bail funds and more than $15,000 in staff funds, from more than 25,300 donors. It’s been amazing and a little overwhelming, but encouraging.

Have the donations been used to bail any protesters out of jail?

Earlier this year, PCBF said it had plans to bring on its first three staffers in addition to your role as lead organizer. Will this influx of donations help move those plans forward?

Yes. We’re moving a bit more slowly than planned because of emergency bail-outs related to COVID-19 and the protests. But we have funds to support about three staff people for the year, including a support coordinator and a director of operations. We’re trying to give our volunteer team a break.

How has your role leading the Community Bail Fund — and the organization itself — changed in the past month, and particularly in the past week?

I think we just buckled down on our mission. With the start of COVID-19, we began doing more political work. We’ve held demonstrations outside the Philadelphia Juvenile Justice Services Center to pressure judges to do everything in their power to release people. We’ve launched social media campaigns to pressure [District Attorney] Larry Krasner to follow through on promises of actual bail reform and to release juveniles being held in adult prisons, especially in the midst of COVID-19. We’ve been doing more than just posting bail. So I think everything has kicked us into a higher gear.

Instead of “kneeling for racial justice,” @DA_LarryKrasner could release Black youth from cages, withdraw prosecution for Black folks in jail at risk of death by COVID, and drop charges for protesters. If you believe #blacklivesmatter, DROP THE CHARGES. #FreeThemAll #FreeOurYouth pic.twitter.com/OSD0bnIV9X

Why should Krasner drop all charges for protesters? What kind of message that will send to protesters and black Philadelphians? And what message does it send if he doesn’t?

One message that’s always been part of our stance is “Free Them All.”

We’re abolitionists at heart. We think the current system needs to be dismantled and something that better serves communities should be built in its place. Nine in 10 people in Philadelphia jails are being held pre-trial, meaning they haven’t been convicted of a crime. Many of them are there because they can’t afford to pay bail. We’ve been moving to get every city actor thinking about what they can do to drastically reduce the prison population, especially during a pandemic. You can’t socially distance in jails. We get reports from people inside that they’re not getting masks; they’re not getting soap; they’re being kept in their cells for days on end so they can’t bathe or shower; they’re not getting cleaning supplies for their cells. There’s been a spike in uprisings and fights because people are scared and desperate because of COVID-19.

People are being kept in these petri dishes because they can’t afford to pay a ransom. So we’re pushing “Drop the charges, don’t drop a knee,” referencing Krasner’s recent photo op at the Octavius Catto statue. We need measures that are actually going to protect the health of Philadelphians and our loved ones who are locked up, many of whom have been there for months waiting for their day in court. Some people have criticized us, like, “Oh you’re just helping the enemies of Krasner who want to see him out of office.” But we’re pushing Krasner to do what Philadelphians elected him to do, which was to drastically change how the DA operates in Philadelphia.

People are also assuming, “If you’re facing charges, you were definitely involved in some shenanigans.” But we’re seeing that a lot of people are being arrested indiscriminately. Even before the protests happened, we were of the opinion that just because someone was charged for something doesn’t mean that they actually did it. People’s anger — the reasons they are breaking curfew and out protesting — is not because they feel like there are no consequences for doing this. We are in the middle of a global pandemic; there are consequences. But people are out in the streets anyway, not just because of police brutality but because white supremacy has been holding a knee on the neck of black and brown people all over this country for hundreds of years, and we have to do something. We’ve seen, especially in recent years, how the clock just resets after the police murder someone. People get angry, people have a protest, the police get a slap on the wrist or get off completely, and then everything goes back to normal. We have to do something radical — not just something symbolic, but something that’s actually going to result in a drastic change to the status quo and birth a new world, a better place.

What do you think of the Mayor’s recently announced Reconciliation Steering Committee? Does this group give you hope, or does it feel more like a Band-Aid fix, like task forces of the past?

I don’t know much about that proposal in particular, but I think it sounds like a Band-Aid. It’s not what people are actually asking for. We’re beyond symbolic appeasement right now. We want structural change. The Mayor has the power to actually bring that. So I’m not excited or encouraged by this proposal.

Mayor Kenney has suggested that his administration could make further changes to his budget proposal in light of the protests and just announced a bunch of reform proposals. I’m wondering what changes you think his administration should prioritize.

One of the first things they can do is just heed the call across the country and in Philly to defund the police. Right now, his budget has around $750 million going to police. Cut the police budget to divert funds to the programs and services that actually serve the people. Philadelphia is one of the poorest cities in the country, so it’s ridiculous that we give a large chunk of our budget to a police force and not to programs that actually help reduce crime. We need more money for our schools, for housing. When we do needs assessments for people who we’ve bailed out, the biggest need is always housing. We don’t need more police.

With the flood of donations the Philadelphia Community Bail Fund has received, you’ve encouraged the organization’s Twitter followers to also donate to similarly minded local organizations, like Up Against the Law. Are there any others in Philly that you’d want to spotlight?

There are a lot of groups that have been active in this area for a while, and they’re doing a lot. There’s the Youth Art Self-Empowerment Project, BLM Philly, the Black and Brown Workers Cooperative, Juntos.

What is PCBF’s long-term goal?

For us, it’s not just ending cash bail. We want to end pre-trial detention and move toward decarceration.