The Best Thing That Happened This Week: No, the Phillies Didn’t Scout Donald Trump in High School

"There's no chance," says a scouting expert. Thank God somebody finally stood up for the integrity of our baseball team. 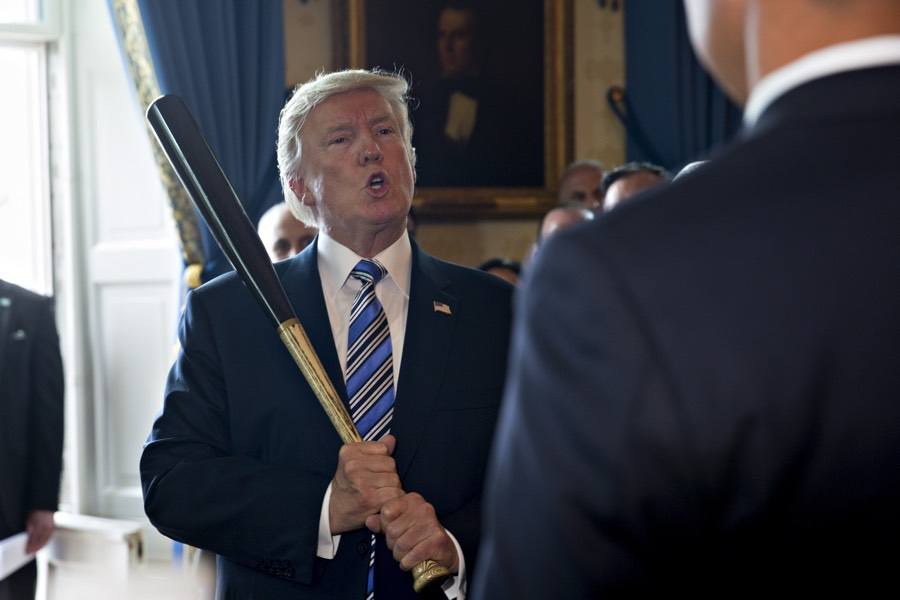 Did the Phillies scout Donald Trump? The president’s baseball prowess as a New York high-schooler appears to have been — surprise! — overstated. (Photo by Andrew Harrer-Pool/Getty Images)

We’re not saying the President of the United States is a liar. We prefer the term “embellisher,” particularly when it comes to the truth. Hey, we understand how easy it can be to get carried away when you’re chitchatting about, you know, your IQ, or your penchant for science, or your great good looks, or even your mental stability. Who among us doesn’t do that every now and again, right? Right?

But when rumors get spread around that our very own Phillies were so impressed with your athletic ability that they scouted you when you were in high school, well, that’s just a bridge too far. And back in 2013, Donald Trump proudly tweeted that he was “said to be the best bball player in N.Y. State” when he attended New York Military Academy in the 1960s. He was backed up by one of his former coaches there, the now, alas, deceased Theodore Dobias, who told both Rolling Stone and the Daily Mail that the Phils were interested in signing the school’s supposed standout first baseman. The President has reminisced fondly about winning games with thunderous home runs but ultimately choosing a career in real estate because there just wasn’t enough money in baseball back then.

Well, this week an enterprising reporter with the unlikely name of Leander Schaerlaeckens decided to look into the President’s record on his high-school team. Slate published the result, and it’s … delightful. Turns out Trump’s memories of his prowess on the diamond are, oh, just a tad larger than life. His batting average, as Schaerlaecken determined by poring through regional newspaper accounts of NYMA’s games, hovered at around .138. Dobias, according to the Washington Post, would say anything that his former protégé told him to say. Schaerlaecken took the stats he found to the Athletic’s senior baseball writer, Keith Law, and asked point-blank: Would this guy have been recruited by the pros? “There’s no chance,” Law responded. “You don’t hit .138 for some podunk cold-weather high school playing the worst competition you can possibly imagine. You wouldn’t even get recruited by Division I baseball programs, let alone by pro teams.” Law declared the idea “absolutely laughable.” So, the evidence seems pretty conclusive. The Phillies, at least, have had their dignity restored.