Philly's own Troy Coffee tells us about his very cool job. 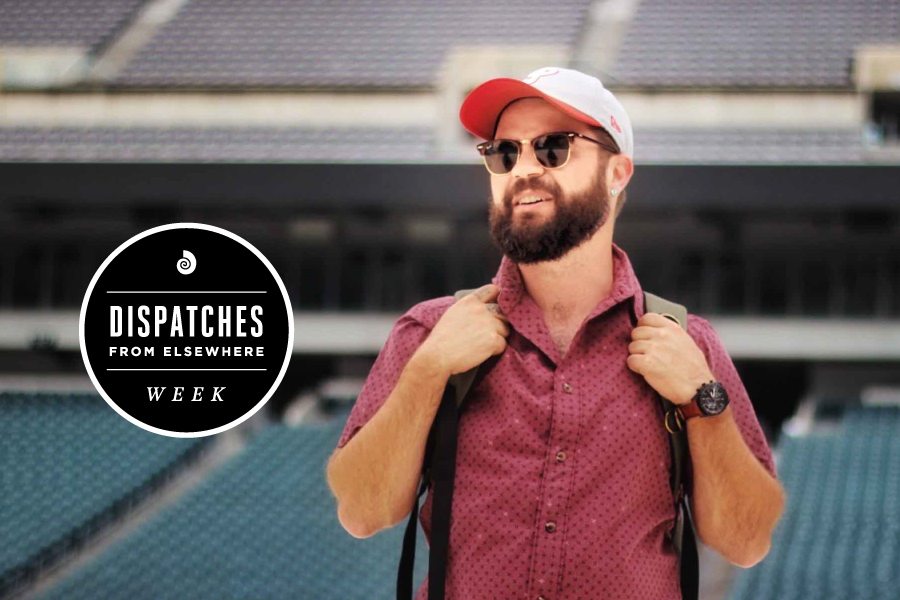 If you’re from Philadelphia, one of the most enjoyable parts of watching Dispatches from Elsewhere, which was shot here, is location-spotting. Some locations are obvious. Others not so much. But they were all scouted by Philadelphia-based locations manager Troy Coffee, one of the scads of talented people behind the scenes of the show. We caught up with him to hear more about his cool job.

How did you get involved with Dispatches from Elsewhere in the first place?
Way, way, way back, I got a phone call that there was a show that AMC thought would work very well in Philly. I showed them some places I had on file based on the script. And then fast-forward to 2019, and we were up and running. Scouting, filming, finding the right places, and dealing with permitting and logistics.

Is Philly a difficult place to deal with in terms of permitting, or do they make it pretty easy to bring a big show like this here?
It’s great — as long as you have the proper amount of time. Which we did. You know, small stuff pops up and you have to deal with it, but really, Philly is a great city to do this in. It’s not hard to maneuver.

It so happens that Philly Mag’s headquarters are in one of the more prominent locations in episode one. Why was the Curtis building the right place to be? 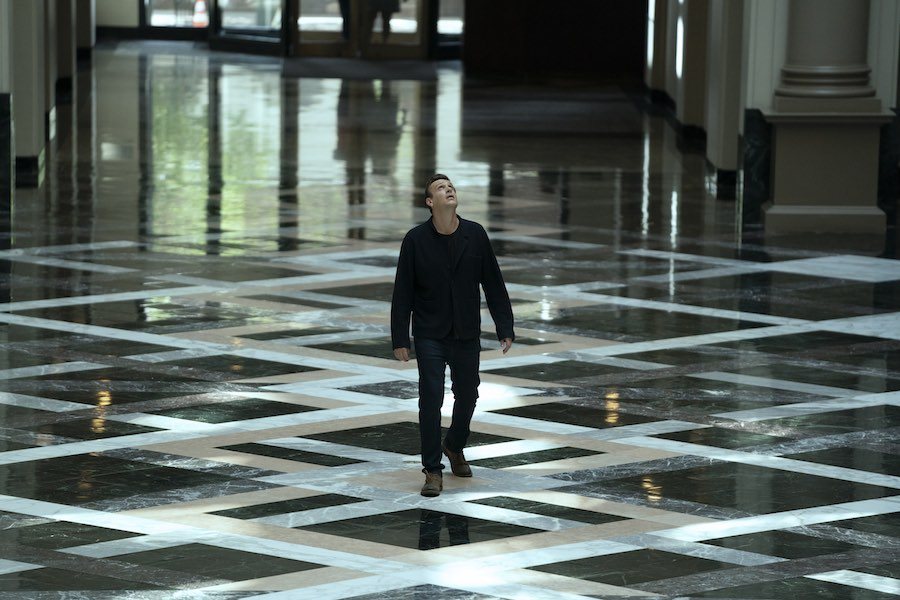 Peter (Jason Segel) inside the Curtis building in Dispatches from Elsewhere.

Jason walked in one day and said it was the perfect lobby. There’s that green color in the lobby that works really well. And it’s quite hard to find any lobby with that much of a big, open expansive space. The Curtis just has a big, beautiful lobby.

I think I’m pretty much a pro at location-spotting on Dispatches from Elsewhere. But I just cannot figure out what building houses the elevator, hallway and those gorgeous, dark rooms that are also prominent in episode one. 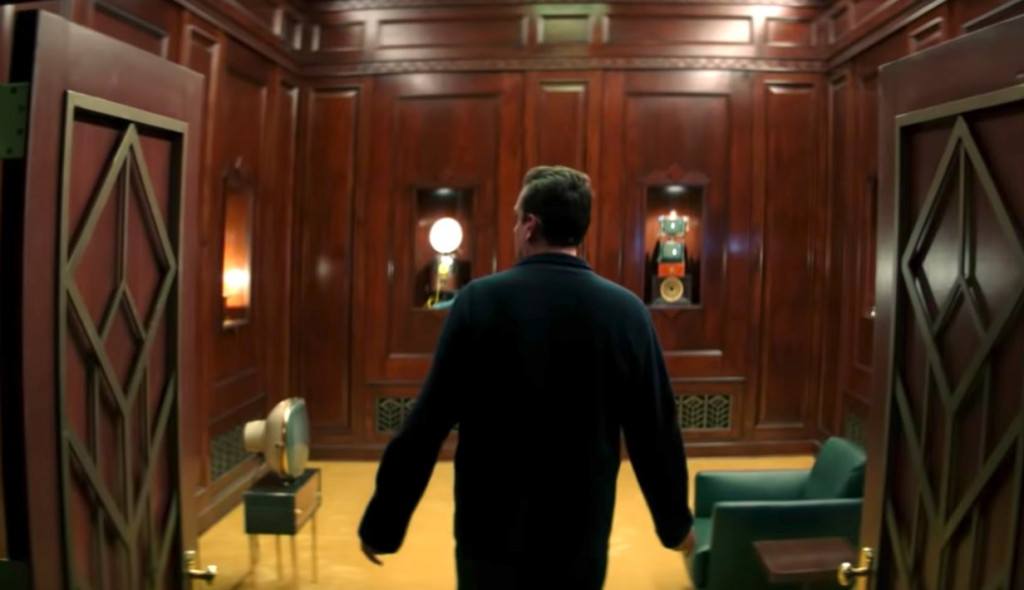 It’s on the 19th floor of One Penn Center, which is the Suburban Station building. The hallway is inside of there. It’s interesting how all of that worked out. We were able to use portions of that building within a certain timeline. But due to those time constraints, we actually had to recreate portions of the interior [at Sun Center Studios in Aston]. So the hallway is inside One Penn Center. But then the induction room and another room from that scene are rooms we built based on rooms we liked at One Penn Center.

We had a big debate at the office over the weird shop that Peter and Simone find themselves in. Nobody could definitively figure out where the heck that store is, but we all want to go there. 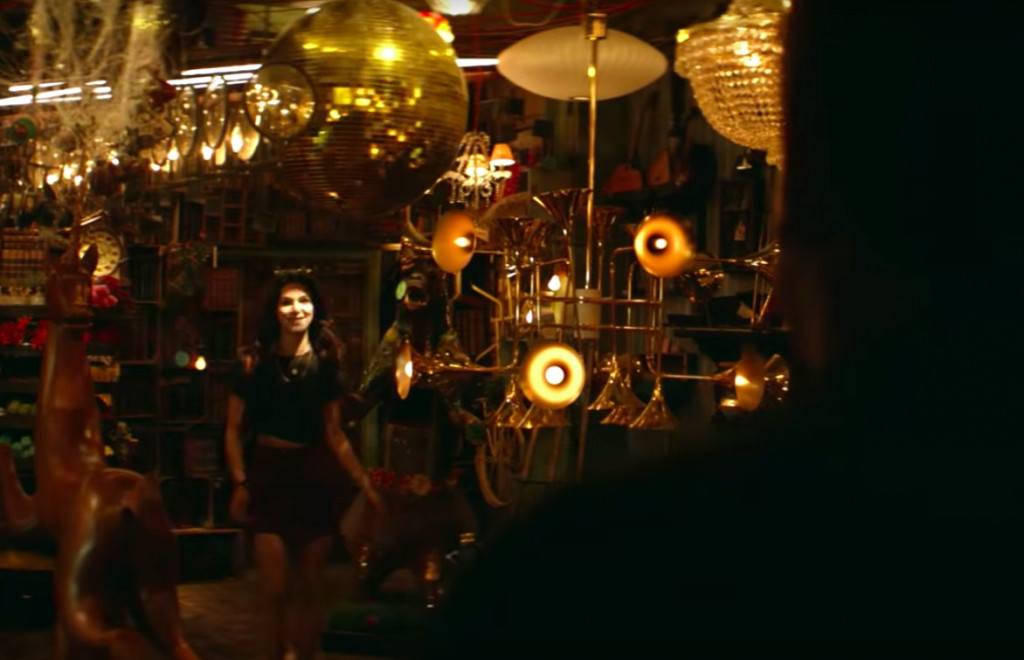 When they first came here in October the year before filming, Jason fell in love with all the old school crazy antique shops. But they re just impossible to film in. There was one he really liked, Neri Antiques on the 300 block of South Street. It has since closed, but when you walked in, it was crammed with decades of stuff. You couldn’t maneuver. It had a special feel to it. That’s what Jason wanted. So we built the store on a stage in Aston, and all the stuff in the store was handcrafted by the art department. From scratch. Such a good space. The alleyway entrance, the tunnel to get to the store, and the front door are all from an actual location, but the store itself is on a stage.

So when you call these places and say you want to film there, what is the reaction? Obviously some of the bigger buildings and companies have protocols and procedures. But the random South Philly grocery store. The Fishtown Tavern. Are people just like, Dispatches from Elsewhere? Jason who?
You never really know what’s going to happen. Some places are prepared for the call. Some have worked on projects like this before, like The Continental. We’ve worked with the Starr Restaurant Group a bunch. And others have no idea. It’s about building a relationship and explaining what you want to do. People don’t really understand the manpower and logistics. One hundred fifty people. It’s 10 or more trucks. It’s a lot.

How did the sort of organic groundswell in Philly around Jason and the show feel to you as a Philly guy?
It was so fantastic. You would see Jason pop up on people’s feeds or in the news. He [and other cast members] were going out to all the restaurants. It was nice to see celebrities in the city taking advantage of what the city had to offer.

Okay, so that’s all very positive. But there had to be something hard about this, right?
There’s a location. It’s in the final episode, so I can’t talk about it. It was just this one white whale of a location. It wound up working out great, but it was tough. And then, we were just trying to really get all over Philly for 10 episodes. We wanted to show Philly in a light that it doesn’t usually get shown in. Just wait until episodes five and eight, nine and 10. We did a really good job of showing off the city that I live in.